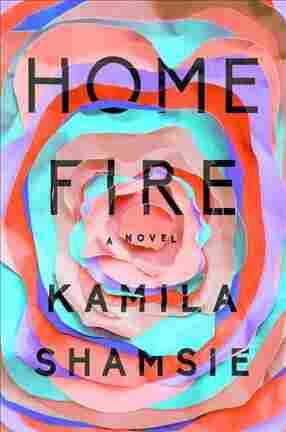 Kamila Shamsie's Home Fire opens with a scene that will likely be familiar to any Muslim who lives in, or has traveled to, the West. Isma Pasha waits in a British airport while security officers check her luggage, go through the browser history on her laptop, and demand "to know her thoughts on Shias, homosexuals, the Queen, democracy, The Great British Bake Off, the invasion of Iraq, Israel, suicide bombers, dating websites."

Isma is eventually allowed to board a plane headed to Massachusetts, where she's studying for a graduate degree in sociology, but her treatment at the hands of the authorities still stings, and is emblematic of the indignities that Muslims face while going about their business. Those tensions between Muslims and Westerners in the post-9/11 era form the basis for Home Fire, Shamsie's urgent and explosive new novel.

Home Fire centers around two families. The Pashas are three siblings whose parents have passed away; their father, a jihadi, died while being sent to the Guantanamo Bay detention camp. Isma, the eldest of the three, has become a de facto mother to her younger siblings, twins Aneeka and Parvaiz. As the novel opens, Isma is in the process of leaving her now-grown younger brother and sister in London.

While she's in Massachusetts, Isma notices a handsome young man from a prominent London family. Eamonn Lone is the son of a white mother and a Pakistani father, Karamat, a Muslim-raised atheist politician who's just been appointed as the United Kingdom's home secretary. Isma regards the elder Lone with contempt, regarding the conservative politician as a "sellout, coconut, opportunist, traitor."

Still, Isma holds out hope for a relationship with Eamonn, although it never materializes. The aimless young man heads back to London, where he begins a stormy, secret love affair with Aneeka. It's a forbidden romance: Eamonn's father is an anti-terrorism crusader, while Aneeka's brother, Parvaiz, has run from home and joined an ISIS-like militant group known for their gruesome videotaped executions.

The novel switches points of view between the main characters, and the structure mostly works well. The sections that follow Parvaiz could have used more pages, however; his radicalization seems to happen rather quickly, and it's not quite clear enough how he went from a sweet-tempered would-be sound designer to a jaded militant in such a short amount of time.

Much more successful are the sections that center around Isma and Aneeka. The elder sister's account of growing up with an absent father ("So she grew up in a house with her mother and grandparents, unaware that her heart was missing anything") is moving without being sentimental. Shamsie also does a great job detailing the relationship between Aneeka and her twin brother, "her ever-present partner in crime, the shadow who sometimes strode ahead, sometimes followed behind, without ever becoming detached from their twinness."

The most impressive part of 'Home Fire' ... is Shamsie's writing, which is beautiful without being florid, and urgent without being rushed.

Home Fire is essentially a retelling of Antigone, which works both for and against the novel. Shamsie moves the setting to the present time ably, and nothing about it seems forced. But it's hard to surprise readers when they know what's going to happen, and the novel hews a little too closely to the Sophocles play. (This goes for the names of the characters, as well — Ismene becomes Isma, Haemon becomes Eamonn, and so on.)

The ending of Shamsie's novel departs from Antigone, thankfully, and it's heartbreaking and beyond explosive. The pacing in Home Fire is near perfect; it's a difficult book to put down, especially once the reader becomes invested in the characters. And thanks to Shamsie's detailed look at the members of the two families, that doesn't take long.

The most impressive part of Home Fire, though, is Shamsie's writing, which is beautiful without being florid, and urgent without being rushed. In one passage in Aneeka's section, Shamsie delivers a moving meditation on grief: "grief was bad-tempered; grief was kind; grief saw nothing but itself; grief saw every speck of pain in the world; grief spread its wings large like an eagle, grief huddled small like a porcupine; grief needed company, grief craved solitude; grief wanted to remember, wanted to forget; grief raged, grief whimpered."

It's a beautiful section, and Shamsie is at her best when she lets herself go; she's an immensely talented writer, and a deeply musical one as well. Home Fire might not be quite perfect, but it's still a gorgeous novel, and one that comes at just the right time.