Accessibility links
Hail to the Chin: Further Confessions of a B Movie Actor Campbell's second collection of rants and ruminations is just as enjoyably smarmy as his first, though the actor's ruthlessly sardonic outlook has mellowed.

'Hail To The Chin': B-List Actor Bruce Campbell Returns With A Memoir Of Middle Age

'Hail To The Chin': B-List Actor Bruce Campbell Returns With A Memoir Of Middle Age

The thing that makes actor Bruce Campbell a cult favorite has less to do with his output (which includes such cheeseball epics as Bubba Ho-Tep and Man with the Screaming Brain) and more to do with his input – that is, the quality he can be counted upon to bring to even the schlockiest table: It's an artisanal cocktail of Dad-joke corniness, jockish swagger, withering derision and a willingness – nay, a palpable need – to come off looking like a jerk. 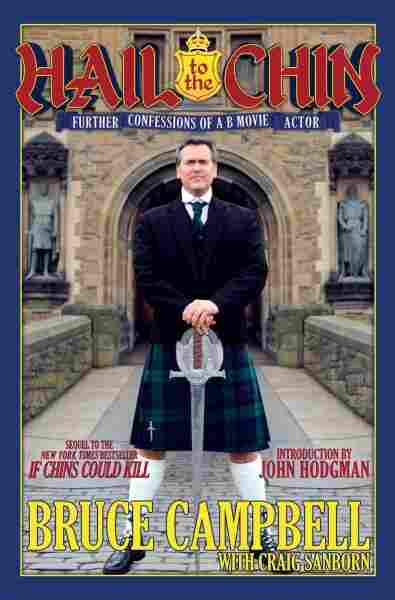 Hail to the Chin

Further Confessions of a B Movie Actor

The guy is smarm made flesh, a human finger-gun. His fans love him for his consummate Bruceness — the knowing "can you believe this crap?" quality they first glimpsed peeking out from behind his performance as the hapless (and ultimately handless) alpha-male Ash in Sam Raimi's Evil Dead films.

When he published his first book of memoirs, If Chins Could Kill, in 2001, he doubled-down on that persona with a chatty, winking, heartily back-slapping collection of anecdotes about the working life of a working actor. It was candid, self-deprecating, and it traced the clear arc of a young man (Campbell refers to himself, invariably, as a "schmo") starting at the bottom of the film industry and rising to its decidedly unglamorous middle. He took you into the casting offices and the makeup trailers, delighting in the day-to-day logistics of film production when your name languishes somewhere near the bottom of the call sheet. And through it all, he sprinkled corny gags, deep digressions and lots of attitude.

This second, loosely structured collection of stories and production notes and rants includes more of the same, though its tone is markedly different. That's because the arc of Campbell's career, over the years this book deals with (roughly 2000 to the present), stopped being an arc and became a plateau. (Very recently, he began starring as a middle-aged Ash on the Starz series Ash vs. Evil Dead, so technically his arc has since become a circle.)

In the years since 2000, Campbell went from being a working actor to a successful working actor – not a star, perhaps, but a recognized face and a staple of the convention circuit. That last thing's important, because even as he landed himself a steady gig on the USA show Burn Notice, the culture around the kind of genre fare that is Campbell's bread-and-butter was changing. The number of outlets and conventions exploded, and nerds – Campbell's core demo — took over the mainstream.

That is perhaps why the hungry edge of Campbell's first book is somewhat blunted, here; a sense of urgency is lacking, and rushing in to fill that vacuum is a relaxed penchant for sardonic bloviation. That's perfectly fine, insofar as the book's prospective readers want to imagine themselves bellied up at some musty dive bar with Campbell's garrulous, opinionated storyteller.

There's a lot, for example, about filming two particularly schlocky movies back-to-back and on-the-cheap in Bulgaria, and he devotes several chapters to his life in rural Oregon (Wildlife encounters: Check. Thoughts on land-use management: Check.) There's also a better-than-average chance that a story will get stopped dead in its tracks if a nugget of abstruse life advice should reveal itself ("Cotton is the Jose Cuervo of fabrics – we've been sold a shabby bill of goods for decades. Cotton, in sock form, lights a fire in your shoe through incessant friction. Wool, for whatever reason, came to my rescue and it's all I wear on my feet now, hot or cold.")

But, of course, that particular species of arch, winking windiness — do not get the guy started about phone company installers! — is the whole point of the exercise. A Bruce Campbell less given to cornball brio would be no kind of Bruce Campbell at all, and certainly no fun to read about.