Accessibility links
'Granny Pods' Help Keep Portland Affordable As rents rise, Portland is making it easier for homeowners to build small houses in their backyards and enable people who would be priced out to stay. 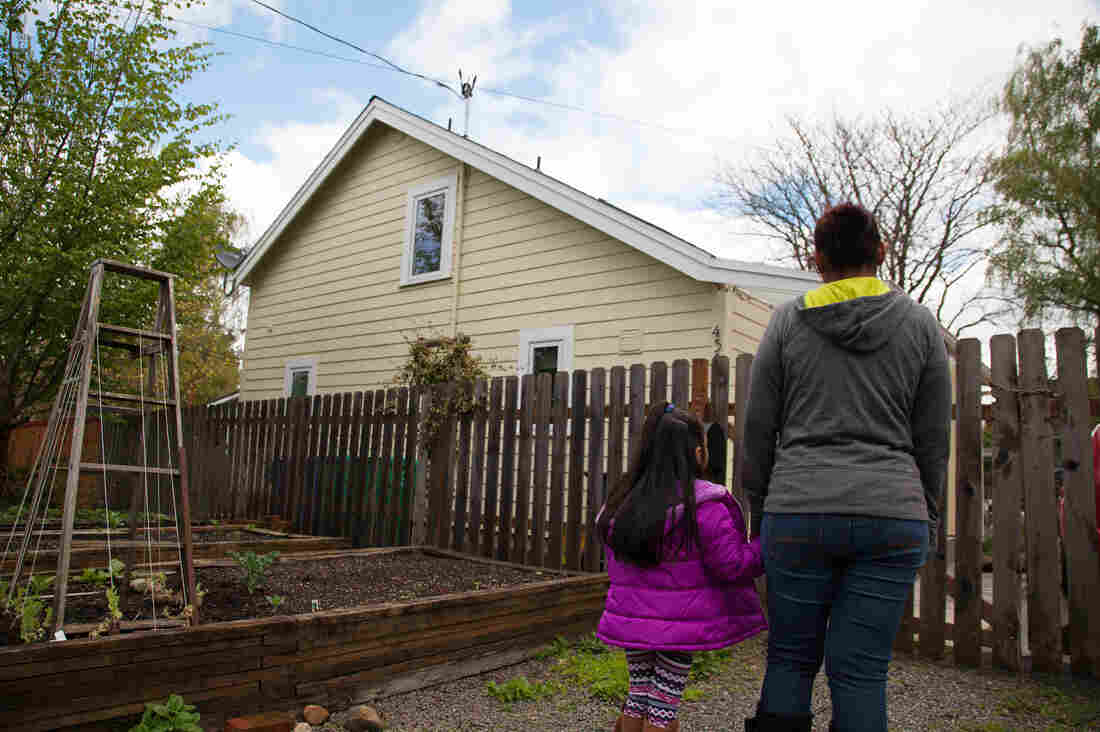 Michelle Labra and her daughter, Daphne, live in an accessory dwelling unit (ADU) in their landlord's backyard. Portland has among the most permissive rules for ADUs in the country. Last year, the city issued building permits for about one a day. Amelia Templeton/OPB hide caption 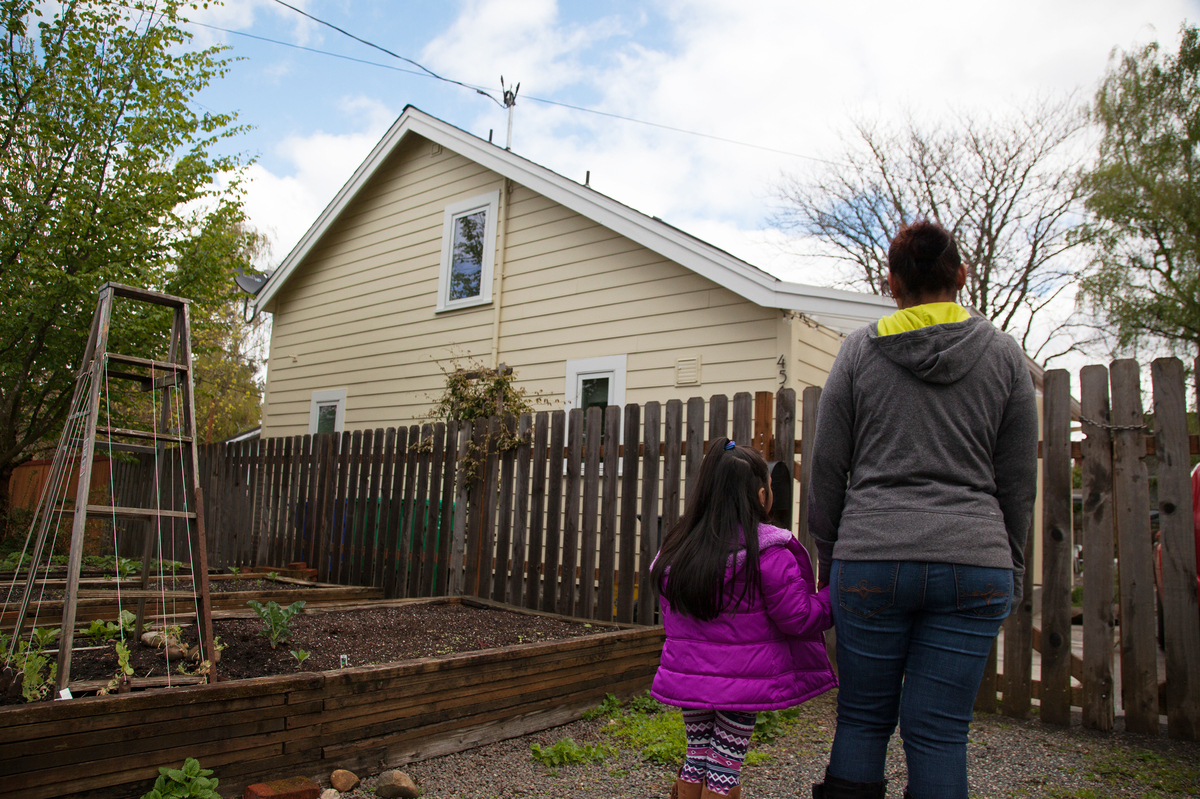 Michelle Labra and her daughter, Daphne, live in an accessory dwelling unit (ADU) in their landlord's backyard. Portland has among the most permissive rules for ADUs in the country. Last year, the city issued building permits for about one a day.

Earlier this year, Michelle Labra got a notice that the rent on her family's two-bedroom apartment was doubling, from around $620 a month to more than $1,300.

She worried she was being priced out of Portland and would have to move to the suburbs.

But Labra, her husband and their two children didn't get pushed out of Cully, their North Portland neighborhood. They were able to stay by moving into a little house, 800 square feet, built in a neighbor's backyard. It's a type of housing city planners refer to as an accessory dwelling unit, or ADU, often called a granny flat or granny pod.

"When I first came in and I saw this beautiful house, I was amazed," Labra says. "We've never had a place that's new like this. My kids loved it, and they were already wanting to get their stuff together and saying, Mom, when can we move in?"

With a lot of cities looking for solutions to rising housing prices, the idea of making it easier for homeowners to add small second units in their backyards and garages is gaining traction.

Portland has among the fastest rising rents in the country, and it has embraced the ADU as a low cost way to create more housing in desirable neighborhoods.

Before they moved into their backyard cottage, the Labras lived in the Normandy, an aging complex of two-story, yellow buildings with siding coming loose in places. About 20 families, most of them Hispanic, lived there.

A new investor bought the Normandy last year, raised the rent, and began fixing it up.

Talking about the sudden rent increase brings Labra to tears. She was close to the other families in the apartment complex, and so were her children, Jose, 8, and Daphne, 5.

"My son, he said, 'I really don't want to leave this area. My friends are here, my school is here.' I realized it was destabilizing to him," Labra said.

The apartment, with its many families with children, became a symbol locally of Portland's rapidly rising rents and the gentrification that was pushing people of color out of the city.

The Normandy was on the main street in Cully, a neighborhood on the northern edge of Portland with mobile home parks, ranch houses and small apartments built in the 1960s and 1970s.

It's also, according 2010 census data, one of the most diverse neighborhoods in Oregon. Close to half of the people who live there are people of color.

The residents of the Normandy started working with a community group called Living Cully and staged a protest against the rent increase. Hundreds of people marched in the streets back in February.

"No more landlord greed. Housing for human need," they chanted.

The owner of the Normandy declined to comment for this story.

Labra and the other tenants did win a small concession: The rent increase was delayed by several months, but they still had to move out eventually.

In an effort to arrest the gentrification of the neighborhood, Living Cully helped about half the families relocate to new homes in Cully. Some of them qualified for affordable housing in a government-subsidized apartment complex nearby.

The Labras found their ADU thanks to a message Living Cully posted on the Nextdoor app.

"An accessory dwelling unit is a fully legal, independent structure that has its own front door, its own address and its own kitchen," explains Eli Spevak, a developer with the company Orange Splot, which builds smaller homes including ADUs.

Spevak lives and works in Cully. In true Portland style, a flock of chickens lives right outside his office.

Spevak says Cully used to be a place to find cheap rent or cheap land. Then, its big lots at the edge of the city started attracting urban farmer types.

Now, he points out, expensive new homes are going up.

"This is the house that was built as a spec development and it sold for $720,000," he said. "And that was an eye-opening change for this Cully neighborhood, where we realized many new people who want to live here might be able to afford to outbid anybody who lives here already."

On much of the city's land, the code limits how many units you can build on a lot, so developers build the biggest house possible, to turn the most profit. There is an exception for ADUs as long as they meet certain criteria.

ADUs, Spevak says, are a way to relax those zoning rules a little and sprinkle some smaller, lower-rent housing into single-family neighborhoods.

"The good thing about it from my perspective is they allow a neighborhood to have people with a wide range of incomes living with each other," he said.

Portland has some of the most permissive zoning for ADUs in the country.

Almost any homeowner is allowed to add one, and the city has encouraged property owners to build them by exempting them from certain fees and parking requirements.

That has led to a backyard construction boom in Portland. Last year, the city issued building permits for about one ADU a day.

"And the numbers seem to be climbing still," Spevak said.

Seattle, Austin, Washington, D.C., and San Francisco also recently made it easier to add a second unit or granny flat.

And last year, California passed a state law that makes it easier for people to legalize ADUs they've built illegally in the past, and that requires cities to allow some types of ADUs, like garage apartments.

Back with the Labra family, the kids are settling in to their ADU.

Five-year-old Daphne likes showing visitors around. She and her brother share a small room in the ADU's loft. Downstairs, there's a queen bed that Jose likes to jump on.

"I'm going to do it now,"Jose announces, launching himself into the air.

The rent here is still a stretch — $900 a month, more than half what the family earns.

But Michelle Labra says it's worth it, because her kids get to stay right here in Cully, and they didn't have to leave their school.