Accessibility links
CEOs' Dilemma: Supporting Trump's Agenda, Opposing His Behavior Several prominent chief executives are leaving President Trump's manufacturing advisory board in response to his views on the violence in Charlottesville. They find themselves in a tough position. 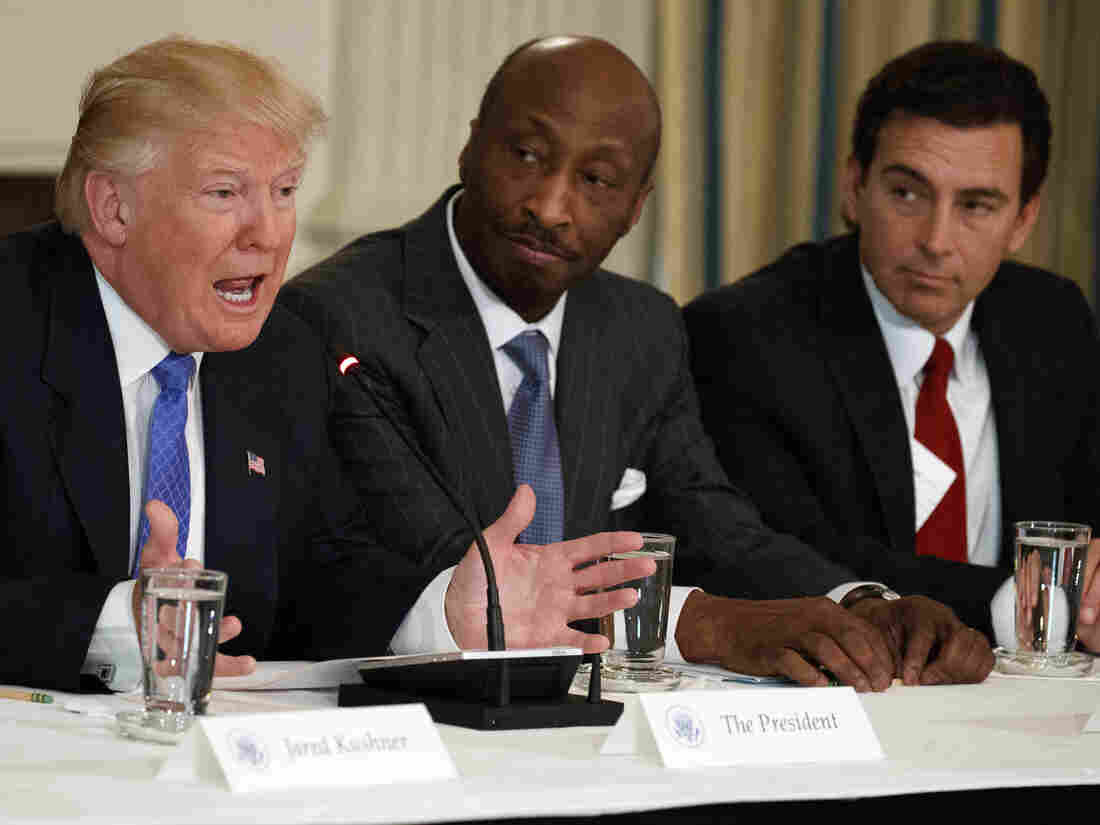 President Trump speaks during a meeting with manufacturing executives at the White House in February, including Merck's Kenneth Frazier (center) and Ford's Mark Fields. Frazier has resigned from the president's manufacturing council. Evan Vucci/AP hide caption 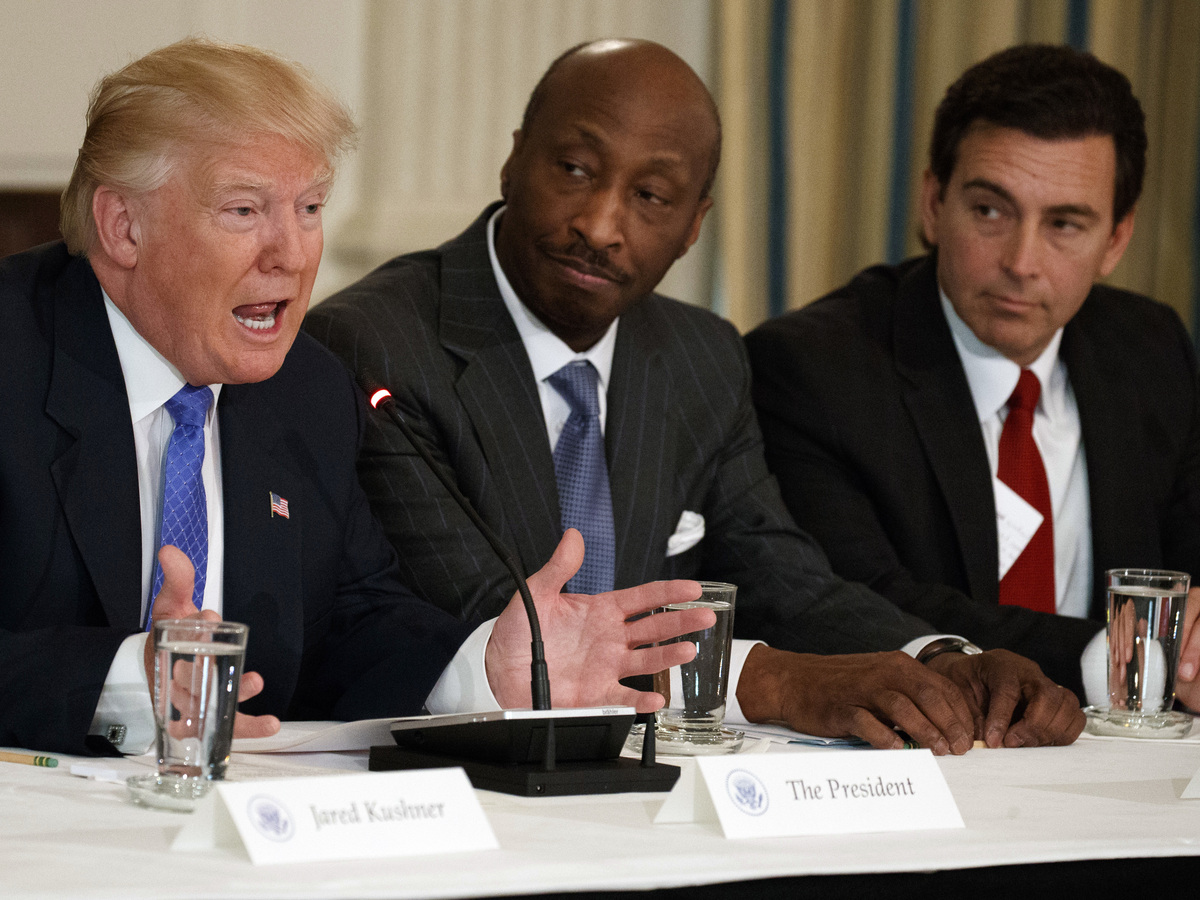 President Trump speaks during a meeting with manufacturing executives at the White House in February, including Merck's Kenneth Frazier (center) and Ford's Mark Fields. Frazier has resigned from the president's manufacturing council.

Under Armour founder and CEO Kevin Plank set off a social media firestorm last February when he voiced some overly positive words about the new administration of President Trump.

"To have such a pro-business president is something that's a real asset for this country. I think people should really grab that opportunity," said Plank, whose company makes sports apparel.

On Monday, Plank became the latest corporate CEO to publicly cut ties with the president, giving up his seat on a White House advisory council on manufacturing amid criticism over the president's response to the violence in Charlottesville, Va., last weekend.

"There is no place for racism or discrimination in this world," Plank said in a tweet.

We are saddened by #Charlottesville. There is no place for racism or discrimination in this world. We choose love & unity. - CEO Kevin Plank

Others quitting the council are Merck's Kenneth Frazier and Intel's Brian Krzanich. Scott Paul, president of the Alliance for American Manufacturing, an industry group, also announced his departure Tuesday, tweeting, "I'm resigning from the Manufacturing Jobs Initiative because it's the right thing for me to do."

I'm resigning from the Manufacturing Jobs Initiative because it's the right thing for me to do.

And AFL-CIO President Richard Trumka also stepped down from the council.

I cannot sit on a council for a President that tolerates bigotry and domestic terrorism; I resign, effective immediately. pic.twitter.com/ip6F2nsoog

"I think these leaders are waking up to the fact their continued silence in the face of mounting evidence of immorality is tantamount to consent," said Nicholas Pearce, clinical associate professor of management and organizations at Northwestern University's Kellogg School of Management.

The departures underscore the dilemma facing corporate chief executives at a highly polarized and partisan time, said David Ulrich, professor of business at the University of Michigan's Ross School of Business and a partner at the consulting firm RBL Group.

They may share Trump's pro-business agenda, but find it difficult to ignore his personal behavior, Ulrich said.

CEOs Of Merck, Under Armour And Intel Resign From Trump's Business Council

He noted that corporations have a big stake in policy decisions being made right now, and giving up a seat at the table means having much less influence in Washington.

"It's pretty easy for a CEO to say, 'These are my values. You violated them.' But the CEOs who are smart know, 'Once I back out of that opportunity to shape policy, the voice that I could have had is now lost,' " he added.

Trump Cites 'Grandstanders' After Another Executive Leaves His Business Council

Trump insisted Tuesday that he would have no trouble replacing the departed members of the advisory council and dismissed them as "grandstanders."

And some high-profile companies have said they are staying on the council.

"We must engage if we hope to change the world and those who lead it," said Alex Gorsky, chief executive of Johnson & Johnson, in a statement released Tuesday.

"Our commitment to diversity and inclusion is unwavering, and we will remain active champions for these efforts," said a spokesman for Campbell Soup CEO Denise Morrison.

The decision to leave is harder for some companies than others.

Among those staying on the council are the CEOs of several major companies that have substantial federal government contracts, including Lockheed Martin and United Technologies.

Given Trump's tendency to hit back hard against anyone who crosses him, such companies may be especially reluctant to anger the White House.

"In this environment, it's easier for an executive to release a boilerplate statement condemning hatred than it is to open him or herself or their company up to the president's Twitter-ranting," Pearce said.