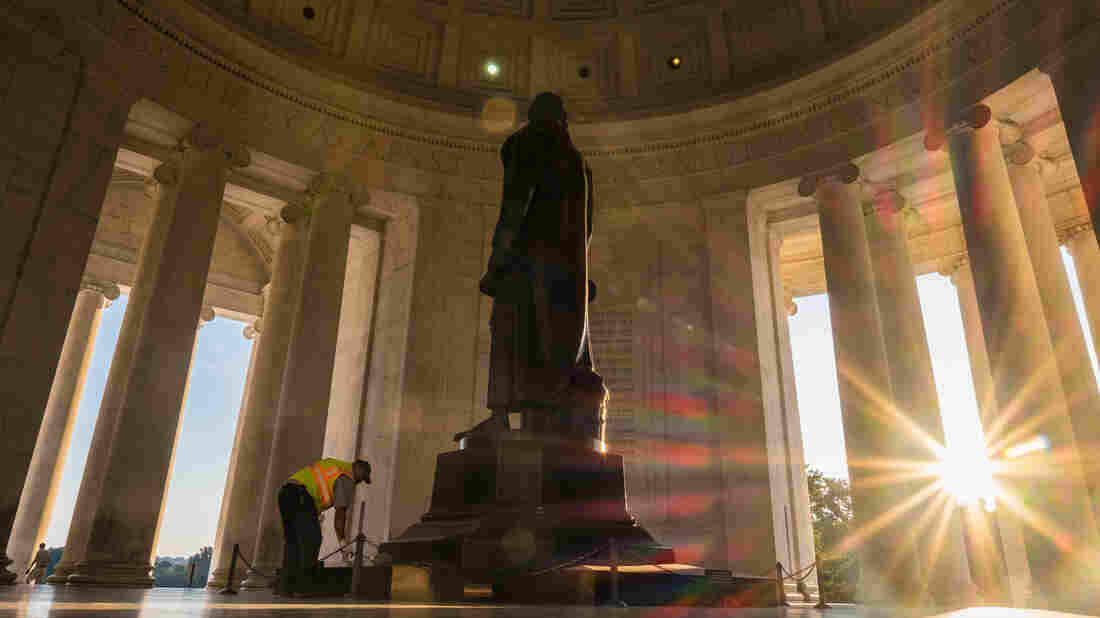 President Trump rhetorically questioned whether statues of Thomas Jefferson, one of which stands in the Jefferson Memorial in Washington, D.C., and George Washington should come down because they were slave-owners. J. David Ake/AP hide caption 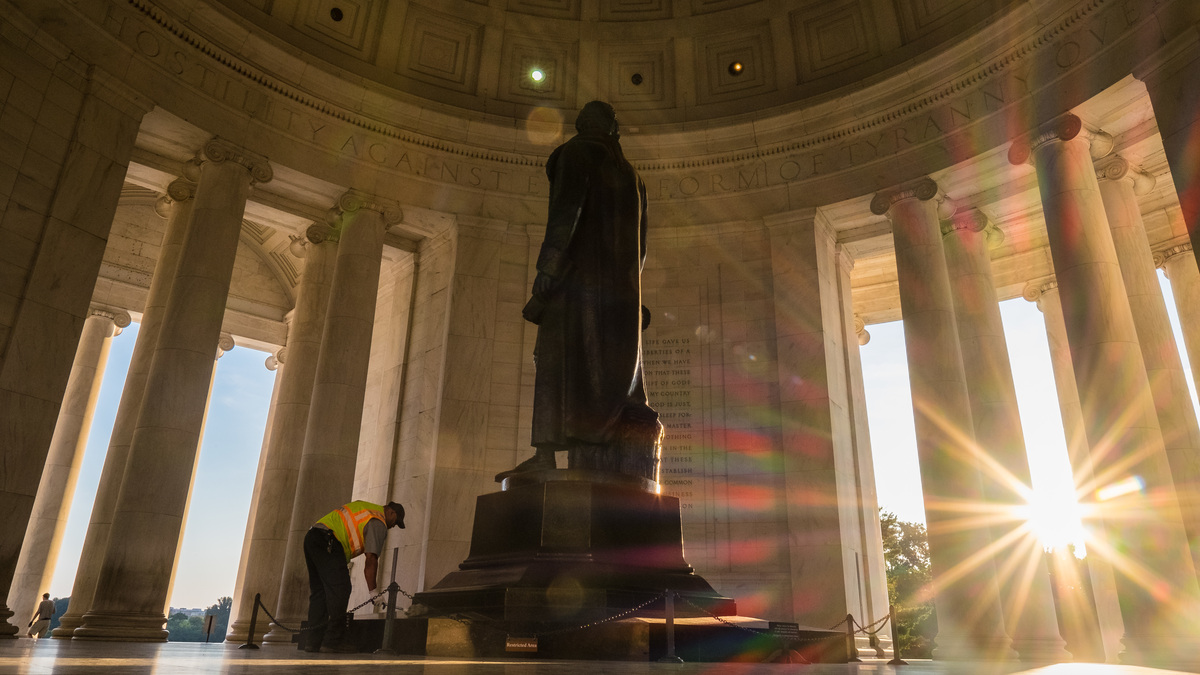 President Trump rhetorically questioned whether statues of Thomas Jefferson, one of which stands in the Jefferson Memorial in Washington, D.C., and George Washington should come down because they were slave-owners.

"So this week it's Robert E. Lee. I noticed that Stonewall Jackson's coming down. I wonder, is it George Washington next week? And is it Thomas Jefferson the week after? You know, you really do have to ask yourself, where does it stop? ... [Jefferson] was a major slave owner. Are we going to take down his statue?" — President Trump, Aug. 15, 2017

The president made this statement Tuesday while jabbing at reporters over a white supremacist rally in Charlottesville, Va., where white nationalists protested the removal of a statue of Confederate Gen. Robert E. Lee.

And he used one of his standard rhetorical techniques, "whataboutism."

While defending the protesters and claiming that they weren't all white supremacists, he changed the subject to attack others. "What about the alt-left?" he said, when asked about the white nationalist alt-right. ("Alt-left" is a term seemingly invented for whataboutism, making liberals seem like the moral equivalents of the "alt-right," whose members coined that term themselves.)

The president's whataboutism on history is the focus here.

"Are we going to take down statues of George Washington? How about Thomas Jefferson?" Trump asked, given Washington's and Jefferson's slave ownership. He added, "You know, you really do have to ask yourself, where does it stop?"

Well, let's take on those questions. The president is not the first person to ask.

Washington did own slaves — and does not get a pass for freeing them at the end of his life. Jefferson was a "major slave owner," too — and is even more to be criticized, because he understood that slavery was wrong, calling it a "moral depravity" and a "hideous blot."

Nor were they alone among our Founding Fathers: James Madison was a slave owner; even Benjamin Franklin owned two slaves before the practice was banned in Pennsylvania. Slavery was so deeply entrenched in the economy that it touched nearly everyone who lived before the Civil War, even those who did not own a slave.

This is an awkward reality for the keepers of memorials and historic sites. Keepers of the Hermitage, Andrew Jackson's home, have been forced to wrestle with the reality that he took Indian land, used enslaved laborers on multiple plantations and even personally chased escaped slaves. The Hermitage has responded by expanding displays showing the dark side of this historic figure, but it is not planning to tear down the house.

So "whatabout" them? Must they all go if Robert E. Lee goes?

Not necessarily, because they are not all the same.

Some figures stood for something larger. Washington guided the foundation of a country that eventually preserved freedom for all. Jefferson authored the Declaration of Independence, in which a single phrase — "that all men are created equal" — became a hammer that later generations would use to help smash the chains of slavery.

It's possible to make a case for honoring such men, so long as we are also honest about their flaws. They were participants in a great experiment in self-government, which has expanded over time to embrace more and more people of all races, not to mention women, too.

So "whatabout" Lee? What did he stand for?

Lee, who is connected by marriage to the family of Washington, resigned from the Army to fight against his country, on the Confederate side in the Civil War.

Then and later, Confederate apologists dismissed the idea that they were fighting to defend slavery. They said they were fighting for "states' rights" or against Northern oppression. But conflict over slavery was what drove the fight for states' rights and divided the country for years before the war. The election of Abraham Lincoln, a president who was critical of slavery, triggered the rebellion.

And the Confederate vice president, Alexander H. Stephens, was more frank than others in stating the rebels' aims. In an 1861 speech, he declared that the "cornerstone" of the Confederacy was "that the negro is not equal to the white man; that slavery subordination to the superior race is his natural and normal condition."

Other Confederates may have fought for different reasons; it is said that Lee went over to the rebel side because he could not bear to fight against his native Virginia. But Stephens' "cornerstone" speech accurately describes the larger cause that Lee willingly served and generally accepted: a drive to overturn the idea of equality, which Stephens called an "error." This cause was the reason that many Confederate statues were built in the era of Jim Crow segregation, from after Reconstruction to the civil rights movement starting in the 1950s. Aside from Southern "heritage" or "pride," many explicitly represented white supremacy.

There is still a case to be made for Lee as a brilliant general, who won battle after battle and kept his army together for years, even though it was massively outnumbered and undersupplied. He is a significant figure in the American story.

Ulysses S. Grant, the general who defeated him, gave the best epitaph of Lee, saying the Confederate general "had fought so long and valiantly, and had suffered so much for a cause, though that cause was, I believe, one of the worst for which a people ever fought."

But let's be honest. In Charlottesville over the weekend, the "Unite the Right" protesters chanted "blood and soil"; others listened to Richard Spencer, who has called for an all-white homeland. Members of one group, Identity Evropa, "seem to revel in goading counter-protesters into violent clashes," according to a profile of a member on KQED. Counterprotesters were indeed goaded into clashes — and a car, allegedly driven by an Ohio man on the white-nationalist side, drove into them, killing a woman.

Is it remotely possible that Spencer and Identity Evropa and the driver of a Dodge Challenger came to defend the statue of Lee because of his skill in military tactics and strategy?

To have such defenders says a lot about the cause that Lee represented. To have the president of the United States compare Lee to Washington is simply, factually wrong.