Accessibility links
Top Republicans Criticize White Supremacists, But Don't Call Out Trump Vice President Pence did not criticize the president's about-face on who is to blame for violence in Charlottesville. Some GOP leaders have spoken up, but not all derided the president specifically. 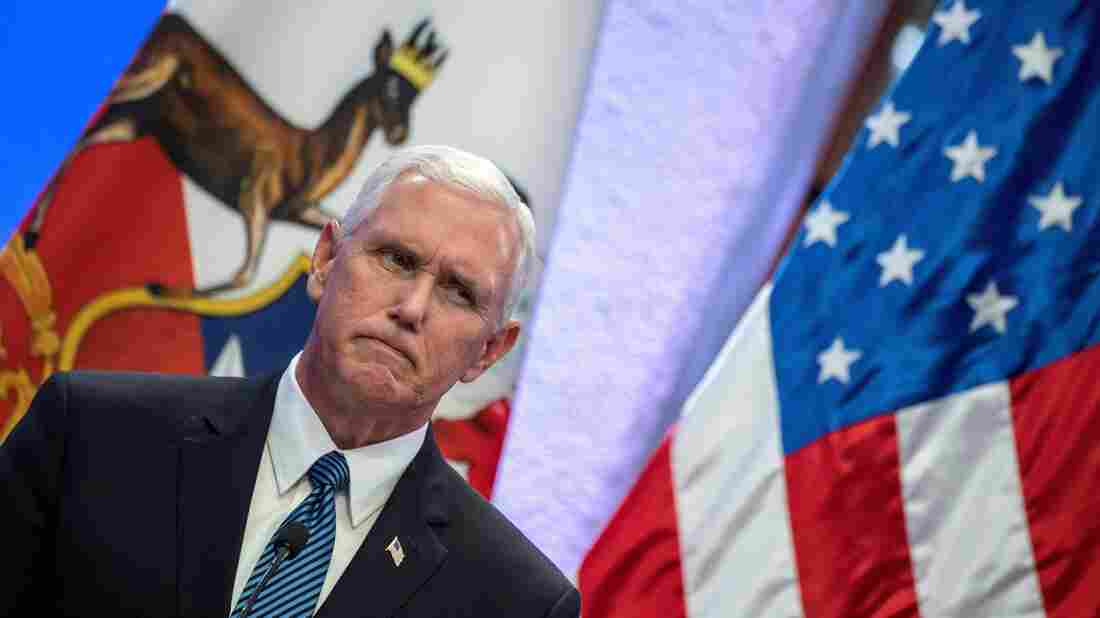 Vice President Pence, speaking in Chile on Monday, said the "president has been clear on this tragedy and so have I" but did not address the president's reversal on the white nationalist protesters. Martin Bernett/AFP/Getty Images hide caption 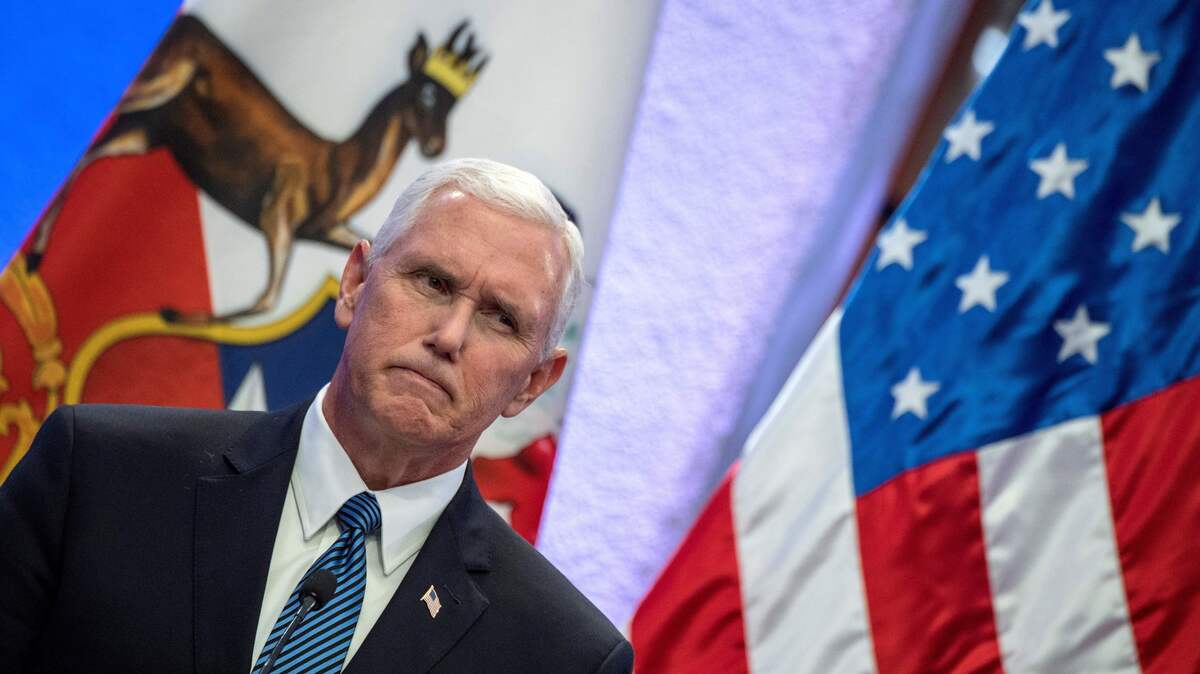 Vice President Pence, speaking in Chile on Monday, said the "president has been clear on this tragedy and so have I" but did not address the president's reversal on the white nationalist protesters.

Vice President Pence on Wednesday declined to denounce or distance himself from President Trump's controversial remarks the day before that "there's blame on both sides" for recent violent clashes in Charlottesville, Va., between white supremacist groups and counterprotesters.

"What happened in Charlottesville was a tragedy, and the president has been clear on this tragedy and so have I," Pence told reporters in Chile. "I spoke at length about this horrible situation in Colombia, and I stand with the president and I stand by those words."

Pence was asked specifically about Trump's about-face on Tuesday, in which he not only assessed blame for the violence equally between the white supremacist groups and the anti-racist counterprotesters, but also suggested that maybe removal of statues of George Washington and Thomas Jefferson was next because both Founding Fathers had owned slaves.

Instead, Pence pointed back to his previous statement on Sunday when he arrived in South America on a weeklong trip. The vice president said then that there was "no tolerance for hate and violence from white supremacists, neo-Nazis or the KKK." It was a day later, on Monday, when Trump himself finally used those words after declining to do so in the immediate aftermath of the violence on Saturday. But then on Tuesday, the president backtracked and all but erased what had been an apparent effort by the White House to provide the kind of criticism of the racist groups that many in the country and some in the GOP had been calling for.

"The strength of the United States is always strongest, as the president has said so eloquently, when we are united around our shared values, and so it will always be," Pence said Wednesday, still not directly answering questions from the Washington Post political reporter Philip Rucker.

Pence also said his thoughts and prayers were with the family of 32-year-old Heather Heyer, who was killed Saturday after a man aligned with the neo-Nazi protesters rammed his car into a street of anti-racism, anti-fascist counterprotesters. Heyer's memorial service was held Wednesday. The suspect has been charged with second-degree murder, among other charges.

Former conservative talk radio host Charlie Sykes told NPR's Scott Horsley the response from many Republicans wasn't surprising given Trump's many other gaffes and controversies during the campaign — calling Mexicans rapists, mocking a handicapped reporter and even the vulgar Access Hollywood tape — that still didn't cause some to fully withdraw their blessing.

Quoting Mandela, Obama's Tweet After Charlottesville Is The Most-Liked Ever

"Each and every time you had Republicans who made the decision that their ideological agenda was more important than holding Donald Trump accountable," Sykes said. "Given that track record, I guess I'm skeptical that this will be the turning point."

In a statement Wednesday, Senate Majority Leader Mitch McConnell, R-Ky., alluded to Trump's comment that there were "fine people" there to protest "on both sides."

"We can have no tolerance for an ideology of racial hatred. There are no good neo-Nazis, and those who espouse their views are not supporters of American ideals and freedoms," the top Senate Republican said. "We all have a responsibility to stand against hate and violence, wherever it raises its evil head."

There is a local connection for McConnell, too. Lexington, Ky., Mayor Jim Gray said he plans to remove Confederate monuments from the city, and the same racist groups have said they plan to rally there next.

"Their messages of hate and bigotry are not welcome in Kentucky and should not be welcome anywhere in America," McConnell also said.

"We must be clear. White supremacy is repulsive. This bigotry is counter to all this country stands for. There can be no moral ambiguity," House Speaker Paul Ryan, R-Wis., tweeted Tuesday shortly after Trump spoke — but didn't condemn the president.

White supremacy, racism, bigotry, and any other form of hate have no place in our society. Period. https://t.co/uzkh7q0017

Former Presidents George H.W. Bush and George W. Bush said in a joint statement that "America must always reject racial bigotry, anti-Semitism, and hatred in all forms." However, they didn't call out Trump by name either.

Republican National Committee Chairwoman Ronna Romney McDaniel said on ABC that "when it comes to Charlottesville, the blame lays squarely at the KKK and the white supremacists who organized this rally and put together an entire event around hate and bigotry" and that "there were peaceful protesters who did the right thing." However, she wouldn't criticize Trump's remarks on Tuesday, instead pointing to his comments denouncing the groups on Monday.

"In Charlottesville, the blame lays squarely on the KKK and white supremacists." - RNC Chair Ronna Romney McDaniel to @DavidMuir pic.twitter.com/5MUw2sA0ic

The RNC chairwoman's uncle Mitt Romney, the party's 2012 GOP presidential nominee who was a frequent critic of Trump during last year's campaign, was more direct in his criticism. The two sides are "morally different universes," Romney said on Twitter.

No, not the same. One side is racist, bigoted, Nazi. The other opposes racism and bigotry. Morally different universes.

Other Republicans went even further, calling out Trump specifically by name. Sen. John McCain, R-Ariz., the 2008 GOP presidential nominee who Trump has clashed with before and who was the deciding vote last month to kill efforts to repeal and replace the Affordable Care Act, called on the president to do more.

"There's no moral equivalency between racists & Americans standing up to defy hate & bigotry. The President of the United States should say so," McCain posted on Twitter on Tuesday night.

There's no moral equivalency between racists & Americans standing up to defy hate& bigotry. The President of the United States should say so

McCain's frequent ally, Sen. Lindsey Graham, R-S.C., who briefly ran for president last year, said in his own statement that Trump should "try to bring us together as a nation after this horrific event in Charlottesville. Your words are dividing Americans, not healing them. Through his statements yesterday, President Trump took a step backward by again suggesting there is moral equivalency between the white supremacist neo-Nazis and KKK members who attended the Charlottesville rally and people like Ms. Heyer. I, along with many others, do not endorse this moral equivalency."

Sen. Marco Rubio, R-Fla., who also challenged Trump unsuccessfully in the 2016 GOP primary, hit Trump for drawing parallels between the white supremacist groups and the counterprotesters. "Mr. President, you can't allow #WhiteSupremacists to share only part of blame. They support idea which cost nation & world so much pain," Rubio tweeted Tuesday evening.

Mr. President,you can't allow #WhiteSupremacists to share only part of blame.They support idea which cost nation & world so much pain 5/6

Former Florida Gov. Jeb Bush, who also battled Trump for the nomination, wrote on Facebook that Trump's remarks were inadequate. "This is a time for moral clarity, not ambivalence," Bush wrote, adding, "For the sake of our country, [Trump] must leave no room for doubt that racism and hatred will not be tolerated or ignored by his White House."

And Ohio Gov. John Kasich — who also ran for president last year, refused to endorse Trump and raised the notion he could mount a primary challenge to the president him in 2020 — told NBC that Trump's remarks were "pathetic" and "terrible."

"The president has to totally condemn this. It's not about winning an argument," Kasich said.

Colorado Sen. Cory Gardner, who leads the National Republican Senatorial Committee and who was one of the first Republicans to criticize Trump's initial remarks Saturday afternoon, told Denver's Fox 31 that Trump was "wrong" in his comments on Tuesday.

The Republican Jewish Coalition also released a statement Wednesday saying they "join with our political and religious brethren in calling upon President Trump to provide greater moral clarity in rejecting racism, bigotry, and antisemitism. As representatives of the Party whose founder, Abraham Lincoln, broke the shackles of slavery, and of an organization with many members who experienced firsthand the inhumanity of the Nazi Holocaust, we state unequivocally our rejection of these hatemongers - you can expect no less from the Republican Jewish Coalition."