Accessibility links
Stream The Cadillac Three's New Album, 'Legacy' For this Nashville-based power trio, it's all about hitting the sweet spot between leanness and brawn, swagger and craft. 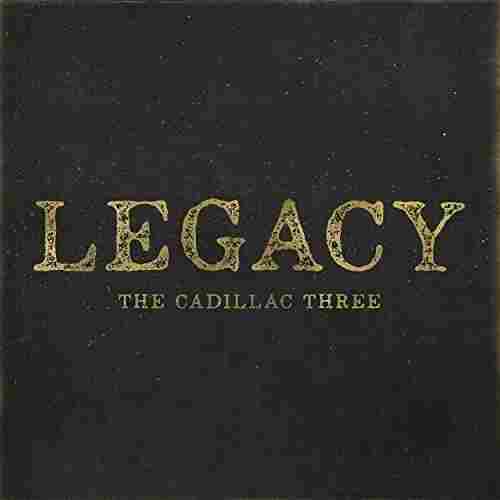 This may seem like an odd thing to say of a band fronted by one of the more successful songwriters in Nashville, but there's actually something that contributes even more to the distinctive identity of Cadillac Three albums than the songs themselves, and that's feel.

The Nashville-based power trio is made up of singer-guitarist Jaren Johnston, lap steel guitarist Kelby Ray and drummer Neil Mason. The three not only coproduced their new album Legacy without outside help, but are the only instrumentalists playing on its 11 tracks, making the most of brawnily tuneful riffs, stout grooves and Johnston's needling, slouchy twang. (They make do without a bassist, since Ray devised a nifty rig that enables him to simultaneously run his licks through separate guitar and bass amps.)

As veterans of Nashville's rock scene, they've spent years woodshedding and getting a feel for each others' musical instincts. Mason's alt-rock outfit Llama got signed right out of high school, then that band begot another one in the mid-2000s — American Bang — that featured Ray and Johnston. Their music had such a pronounced southern accent already that it wasn't much of a stretch for Mason, Ray and Johnston to lean on those stylistic and cultural markers of country identity, rebrand themselves as The Cadillac Three (after briefly going by Cadillac Black) and join the rock-and-country-merging roster of Big Machine early this decade, just ahead of the current wave of bands signings with country labels. (Levon, Midland, Old Dominion, LANco, the Last Bandoleros, Little Feather, Delta Rae and A Thousand Horses are among those who've been snatched up since then.)

Johnston wrote every song on the new album, often in collaboration with Mason and co-writers from outside the band, but it's when they and Ray apply their rugged craft to arranging a song and working out their parts that its defining character emerges. They felt no particular ownership over "Dang If We Didn't," a tune they'd envisioned pitching to other artists, until Johnston gave it an overhaul. Here's how he explained the process in a promotional video: "I just kind of messed around with it, put some slide on it, changed the progression and the feel and turned it into more of a Stones-meets-I don't know... something that maybe Dwight Yoakam would've done on his This Time record or something like that." On the resulting track, Johnston delivers the amiably jocular hook over a sludgy, straight-ahead pattern from Mason and Ray, and embroiders the chorus with a cascading guitar figure that accents the off beats.

The way Johnston described the back-and-forth with Lori McKenna (one of country's most celebrated and sensitive songwriters) that led to "American Slang" is also instructive. She supplied the song title and some initial lyrics. "It was almost like a poem, just the way it read, and there was no big chorus really," he recalled of her contributions in another video clip. Then he played around with ideas on his guitar and came up with a galloping, fingerpicked figure that helped sew the song together for a band looking to diversify the textures in its repertoire. "It gave us something," he went on, "a different feel and different key to play in."

The lyrics of the trio's sturdy songs tend to unfurl descriptions of unruly good times, inherited blue-collar pride and reluctant domestication, and often feel like they're written in defiance of elitist attitudes toward perceptions of southernness. They're also stocked with musical references that carry symbolic meaning. "Cadillacin'" mentions the ZZ Top song "Cheap Sunglasses." (That Texas trio's bluesy boogieing, capable of expanding to an arena-scale rumble, is one of the younger trio's sources of inspiration.) The blistering "Tennessee" admiringly name-checks a recalcitrant, musically adventurous, Nirvana-covering country outsider. "Get out the vinyl, girl, and put old Sturgill on," Johnston urges. "Go on, turn it up loud / I need to feel, need to hold, need to hear somethin' real tonight." And the Hank that Johnston pays tribute to in "Hank & Jesus" is Jr., who may get more attention for political rants than anything else these days, but, as David Cantwell has argued, also laid out the template for a "hard-rock approach to country music," one that The Cadillac Three has no doubt studied.

Ray, Mason and Johnston understand that it's their interplay and execution that makes their hooks so sticky. The chorus of "Demolition Man" is powered by a four-on-the-floor drum groove and a big, insistent guitar riff that parallels Johnston's singing. In the verses of "Long Hair Don't Care," the funky, loosened guitar figure is the perfect rhythmic counterpoint to the melody's unhurried undulations and Johnston's drawled phrasing. In "Take Me To the Bottom," they flesh out a slightly psychedelic, analog take on woozy, alt-R&B seduction. And in "Ain't That Country," a fresh angle on a Waylon Jennings-esque feel, they layer a simple, arcing slide lick and twangy, phase-shifted guitar over a loping, fluent groove with continuous ghost notes on snare drum.

For The Cadillac Three, it's all about hitting the sweet spot between leanness and brawn, swagger and craft. That's the sort of music they want to play, just the three of them, on stage night after night.