Accessibility links
Charlottesville: With Candlelight, Thousands Gather On UVA Campus For Vigil Thousands of people converged on the University of Virginia campus Wednesday night in a show of support for the Charlottesville community following last weekend's white supremacist rally. 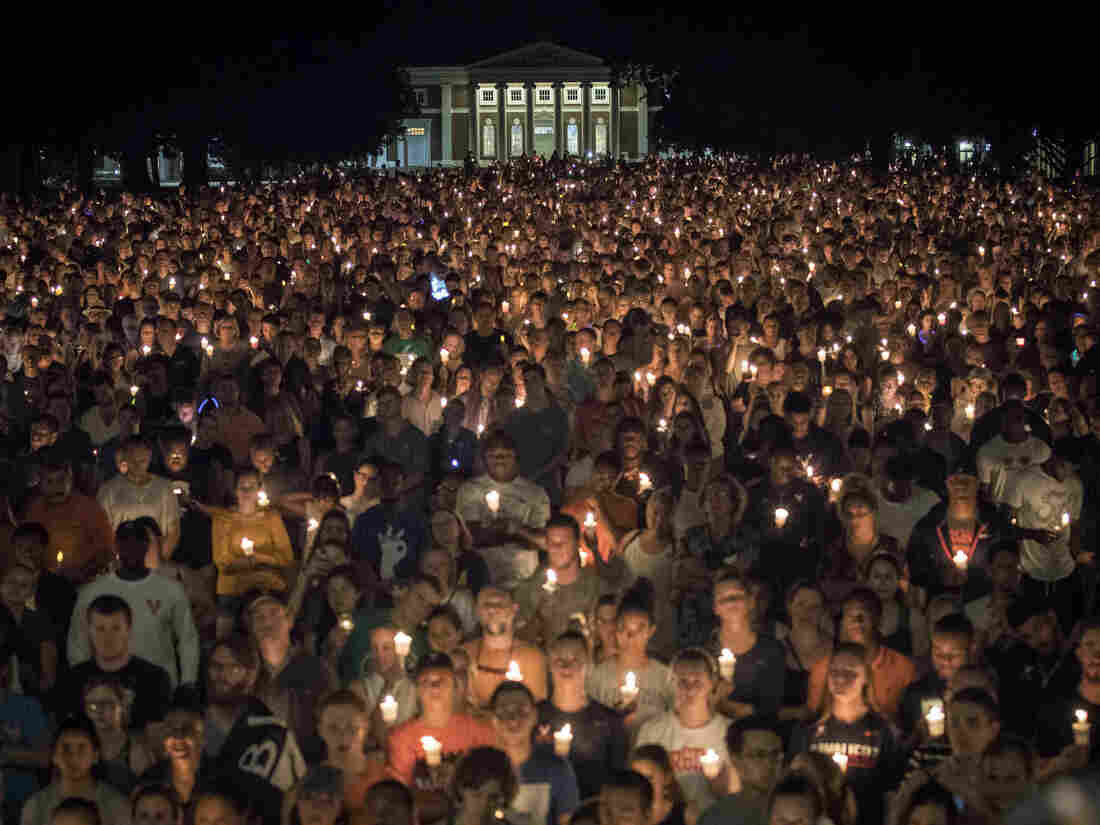 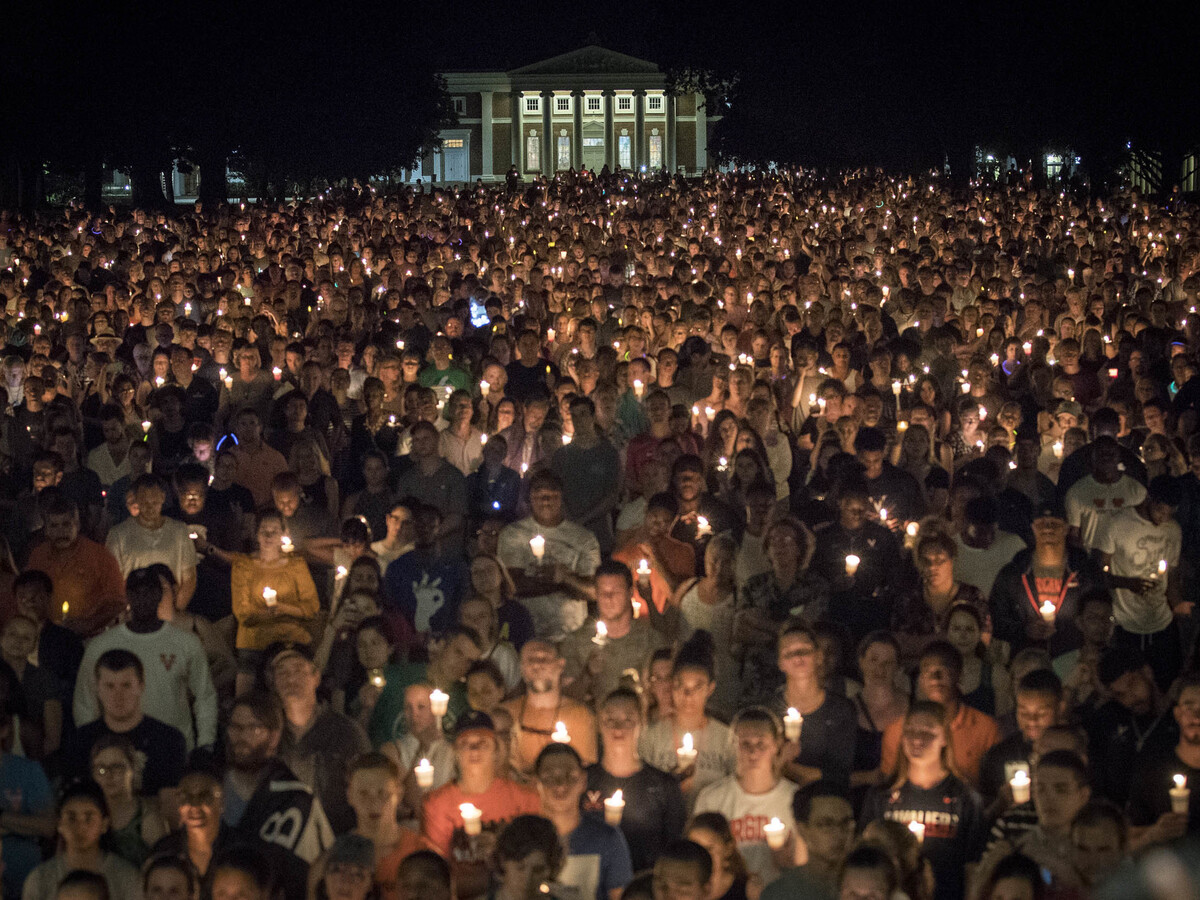 Thousands of people quietly amassed on the University of Virginia campus in Charlottesville on Wednesday night for an unannounced candlelight vigil.

A soft glow illuminated the Rotunda – the iconic historic building at the heart of the university.

After a dark week in the city, it was a peaceful protest intended to counter a weekend of deadly violence sparked by a white supremacist rally.

People streamed onto campus, lifting up lit candles. They chanted "love wins" and sang "We Shall Overcome" and "Amazing Grace." A student read Maya Angelou's Still I Rise.

Those on the lawn are now singing Amazing Grace. pic.twitter.com/1aVVaouw71

On Friday night the campus had been aglow, but with torches wielded by white supremacists shouting racist chants. They faced off with counterprotesters around a statue of U.Va. founder Thomas Jefferson.

The candlelight vigil, which U.Va. said retraced the steps of the supremacists' rally, was a rejection of Friday's scene, said government major Daniel Folsom.

"It was definitely a shock to see a lot of white supremacists surround this statue and surround U.Va. students, some of whom were in the middle of the statue as a counterprotest," he said. "Because this has always been somewhere where we're safe."

That sense of safety was shattered when Charlottesville became a battleground for one of the largest formal gatherings of hate groups in recent history. Their rally erupted in violence as they clashed with opponents.

Memorial services for 32-year-old Heather Heyer, who died after a driver barreled through a crowd of counterprotesters, were held earlier Wednesday. Heyer's mother called on mourners to carry on her daughter's fight against injustice.

At the vigil, people stopped to place their candles around the base of the Jefferson statue. 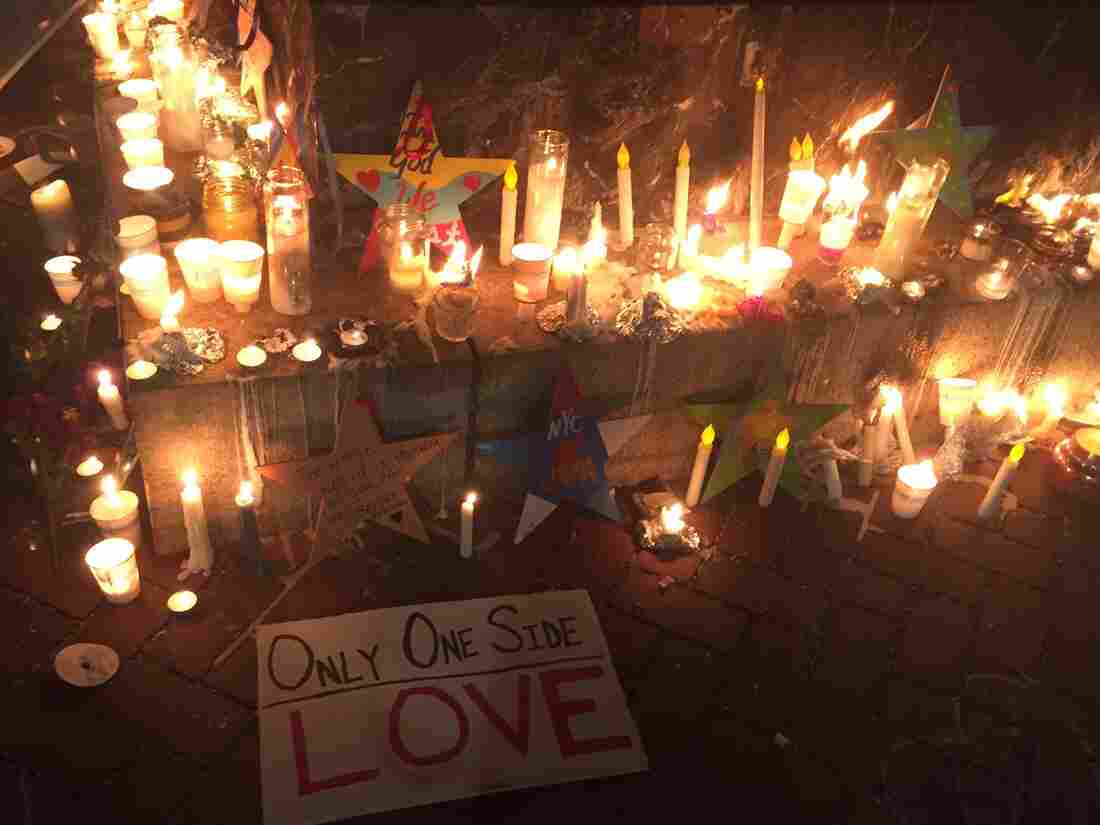 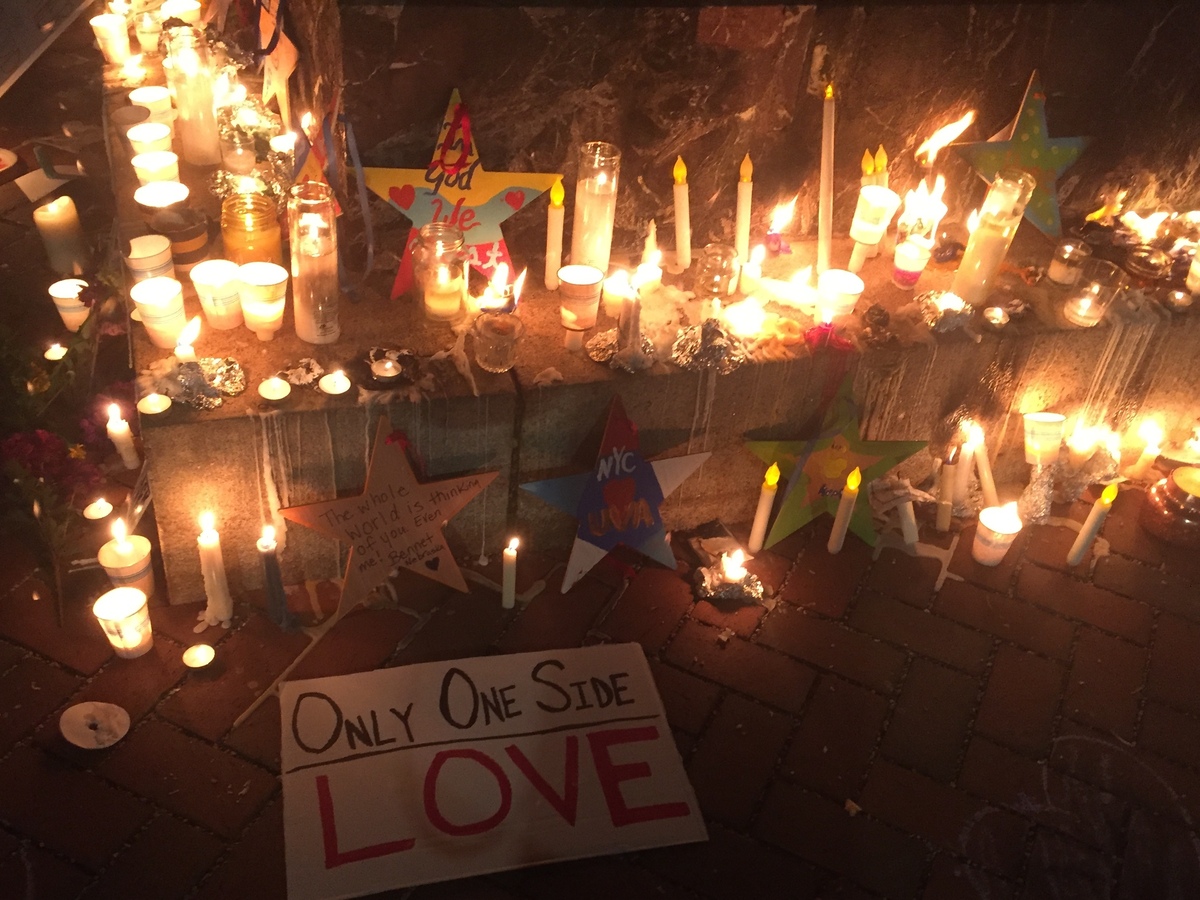 "It's a very moving experience to go up and put your candle there and you feel the flames," said Ellen Markowitz. "And it's like this will go on, and we're lighting something, like Heather's mom said. We'll make this count. We'll make it a beginning."

For many, this was a chance to reclaim both this space on the U.Va. campus, and the town of Charlottesville.

The vigil was not publicized in advance, but spread through a stealth campaign to thwart any hate groups that might seek to disrupt it.

Michael Coleman, a 29-year-old musician and sales manager, said he's encouraged by the mass rejection of hate, but he wonders if it will last.

Thousands of people "gathered with candles singing is beautiful," he said. "But, you know, if something else happens next week, are you going to be here? Are you going to engage yourself? Are you gong to talk to people tomorrow and the next day and next day?"

Coleman said doing the hard work when it comes to race will be the big challenge.