Accessibility links
Summer Camp Teaches Young Muslims How To Cope With Rising Hate The 55-year-old Muslim Youth Camp is taking on new meaning as a temporary respite for today's new generation in the current political climate. 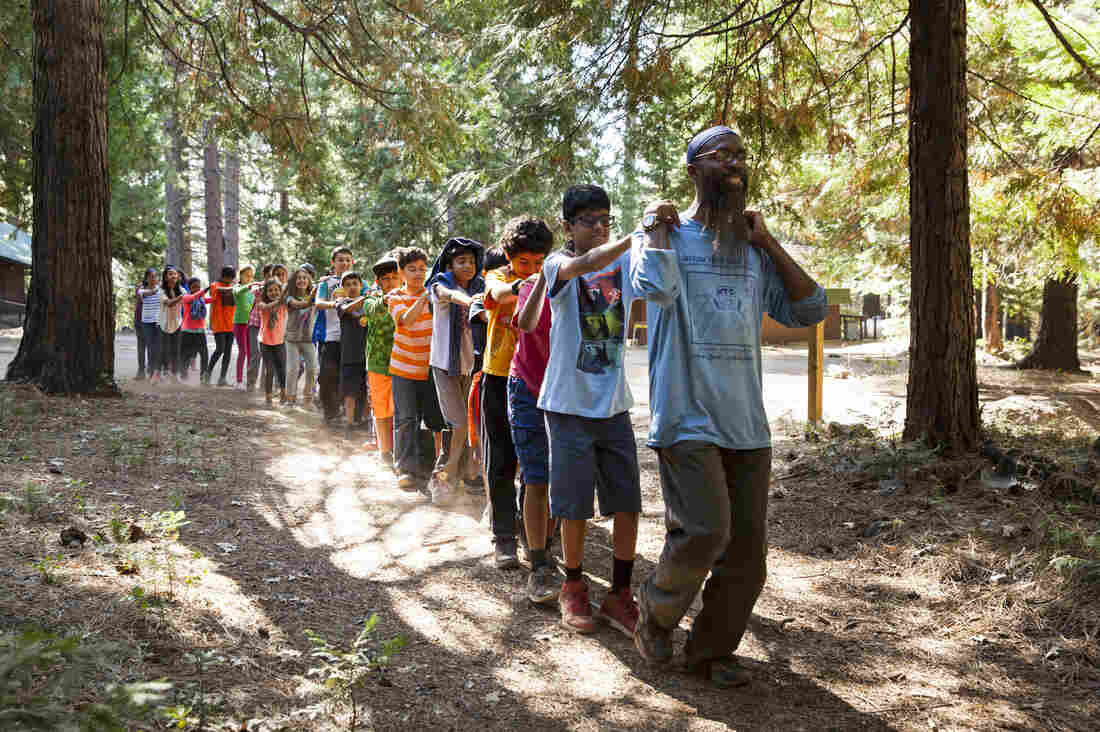 Ronald Chavez Hassan leads kids in a trust walk at the Muslim Youth Camp of California. He has been a teacher at the camp for 25 years. Maggie Starbard for NPR hide caption 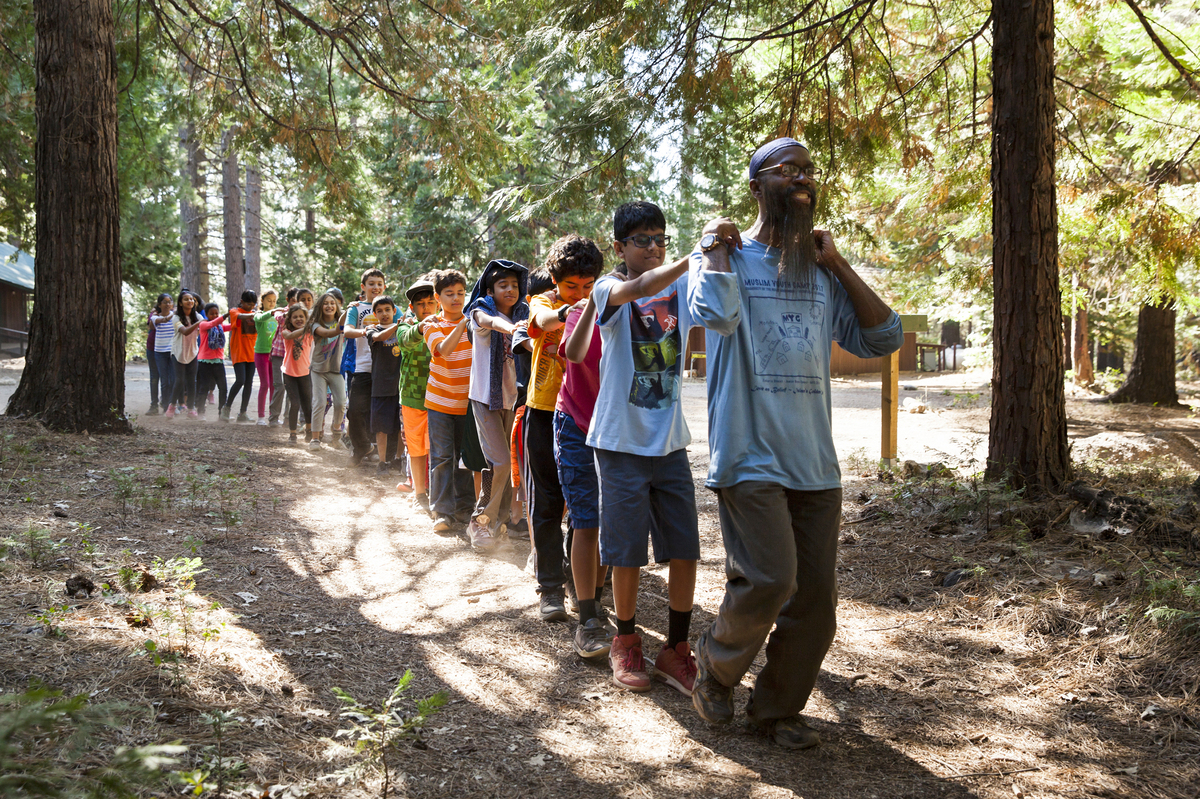 Ronald Chavez Hassan leads kids in a trust walk at the Muslim Youth Camp of California. He has been a teacher at the camp for 25 years.

The sun has set, the hiking, swimming and prayers are over and a group of kids are goofing off, taking turns telling corny jokes in the woods.

"Why did the cow cross the road?" a kindergartner yells into a megaphone in front of his fellow campers. "Because the chicken was on vacation!"

It's a typical summer camp in Northern California, except at this camp all the kids are Muslim.

Every summer for 55 years, Muslim kids, teens, young adults and parents gather in these woods to learn about faith and have fun. It is the oldest camp of its kind for young Muslims in America. But today the camp has a different meaning for this new generation. It's a momentary respite for the campers in a country where anti-Muslim sentiment is rising sharply.

The late Marghoob Quraishi and his wife, Renae "Iffat" Quraishi, founded it, to help new American Muslims find a sense of community. 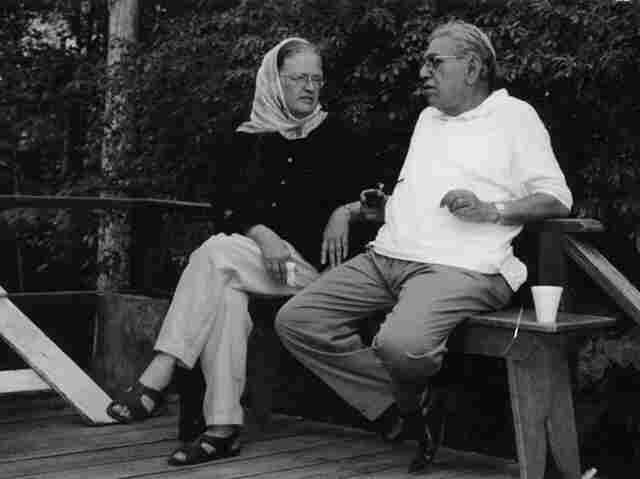 Marghoob Quraishi and Renae "Iffat" Quraishi founded the camp in 1961 as a place for kids to gather and learn about their faith. Renae, a convert to Islam who grew up American Methodist, went to a Methodist camp, and the Quraishis modeled theirs on her experience. Marghoob died in 2005; the next generation, including their daughters, runs the camp. Courtesy of the Quraishi Family hide caption

Originally Indo-Pakistani, Marghoob ended up at Stanford University in California. His daughters say he looked around and realized that new American Muslims, like himself, needed a place to teach their kids about being American Muslims. His wife is an American Caucasian woman who converted to Islam from Methodism and grew up going to Methodist summer camp. So the couple modeled it on that.

The camp is steeped in American camp tradition — hiking, swimming, s'mores — mixed in with prayer and classes.

Marghoob Quraishi died in 2005, and now the couple's daughters and their peers run the camp.

"My father, he saw Islam as a force for good, equality, social justice and pursuing knowledge," said daughter Amira Quraishi, who is the Muslim chaplain at Wellesley College. 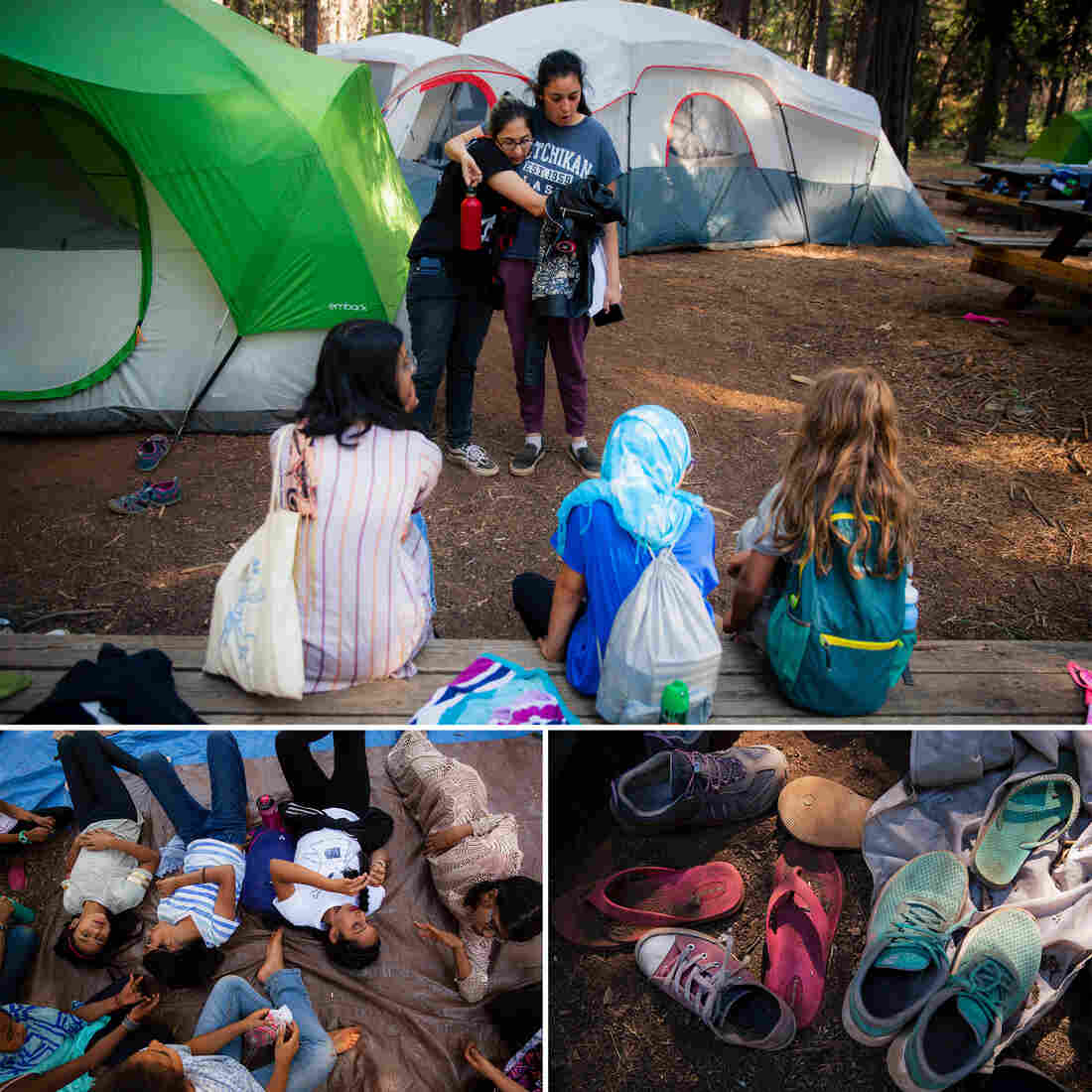 Top: Counselors Manar Soliman (left) and Jasmine Wadalawala embrace while waiting for their campers to gather. Left: Girls rest in the shade of a cedar tree after Dhuhr prayer. Right: Shoes are piled outside a tent. Maggie Starbard for NPR hide caption

In 1960, there weren't many mosques or Muslim clubs in North America. So her father founded Islamic groups at the university campuses he went to. And, of course, he and his wife started Muslim Youth Camp.

"He saw that these were new Muslims in a new country and they needed to try to figure out how they were going to be Muslim in America," Amira recently said at the camp. "The way my dad described it is that he just started walking and then after 20 years looked back and noticed people were coming with him."

"He just thought it was good for people to be together, and be able to pray together and have fun together," she says.

The camp has been home to many Muslim American leaders, like Jihad Turk, who founded and heads Bayan Claremont Islamic Graduate School, the country's first Islamic graduate seminary. Turk is at camp this year with his kids. Or Shahed Amanullah, who was a senior adviser for technology at the U.S. State Department and has been named one of the 500 most influential Muslims in the world several times by the Royal Islamic Strategic Studies Centre.

"I don't have any responsibility here; I'm not the only Muslim; I'm not the spokesperson for all of Islam here," said Manar Soliman.

She doesn't have to be the ambassador of her faith. 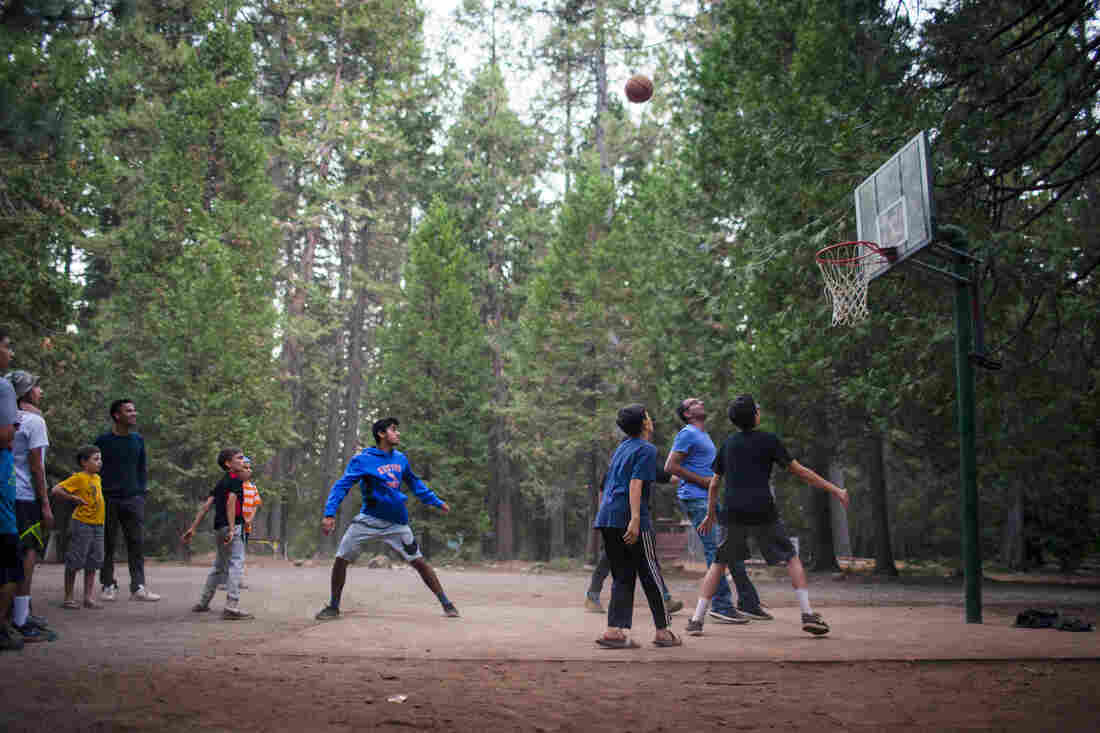 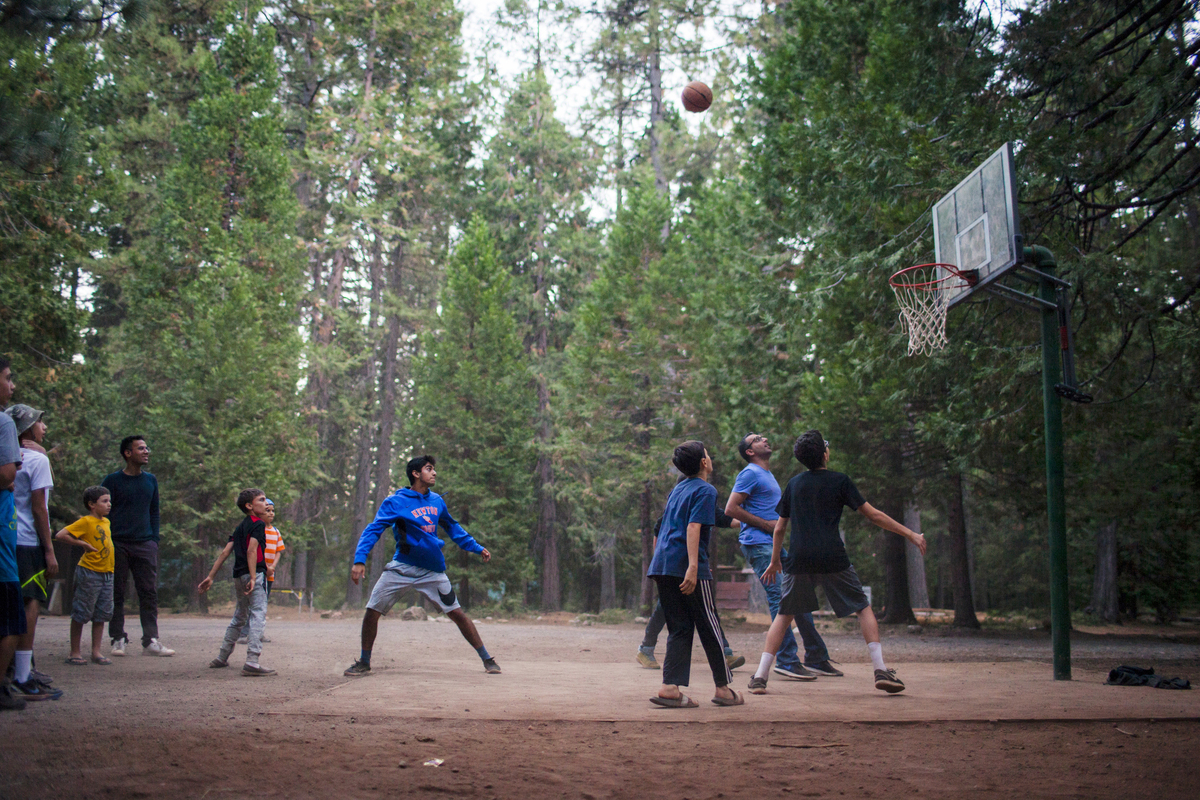 Campers play a pickup game of basketball during downtime before evening prayer.

For 20-year-old Soliman, camp is a family tradition. Her grandfather brought her mother and uncle and aunts here as kids. She says she has six cousins at camp this year.

Back home in Texas, Soliman doesn't have that many Muslim friends. And often her college friends have met only one Muslim — her.

"It's a lot of explaining. You know, why people wear hijab. Why I don't wear hijab; why I don't drink alcohol," she rattles off a list of stereotypes.

With blue hair and goals to be a professional wrestler, she says she doesn't look like what people think Muslims look like.

This year, she is a volunteer counselor with Jasmine Wadalawala, a Mexican-Pakistani-American Muslim, who also went to the camp as a kid. It gave her the confidence to tell people at school she was Muslim. Before camp she hid it, afraid of questions and hostility.

The two women are college students now. They're setting up tents before the campers arrive. And they admit they're a little worried. Days before the weeklong camp began, someone threw a bomb into a Minnesota mosque.

"I was actually thinking in my bunk last night, what if someone comes and busts through the door," Wadalawala said. 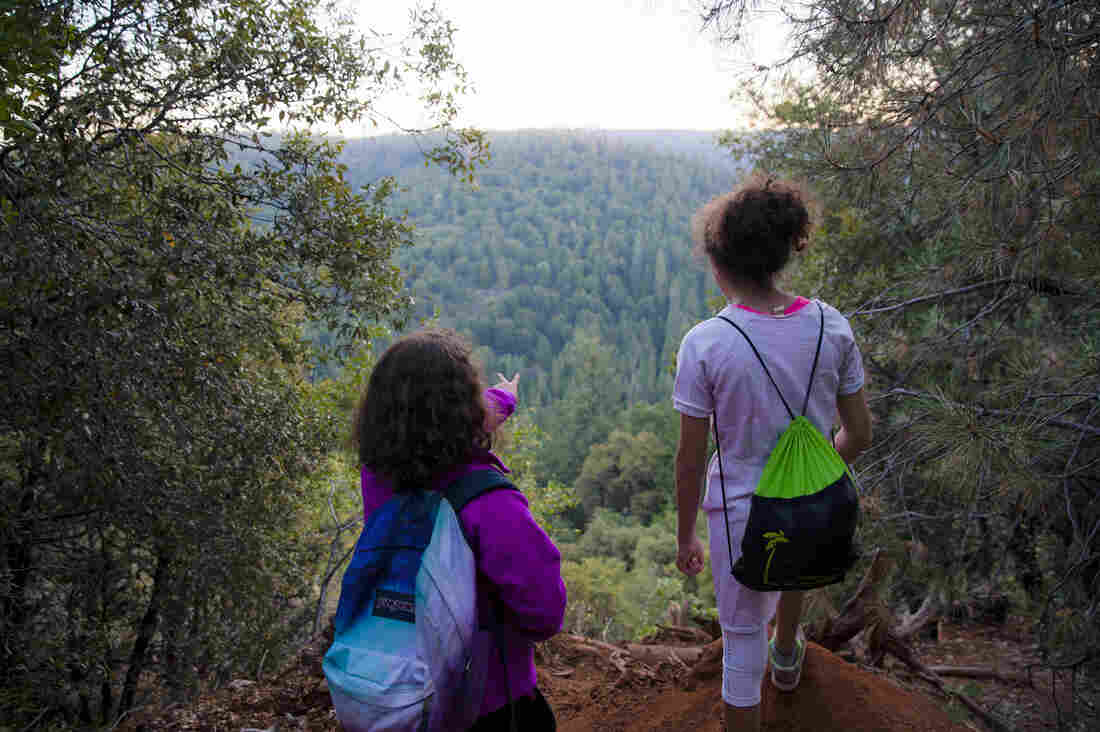 Following the predawn Fajr prayer campers go on a hike to see the sunrise. Maggie Starbard for NPR hide caption 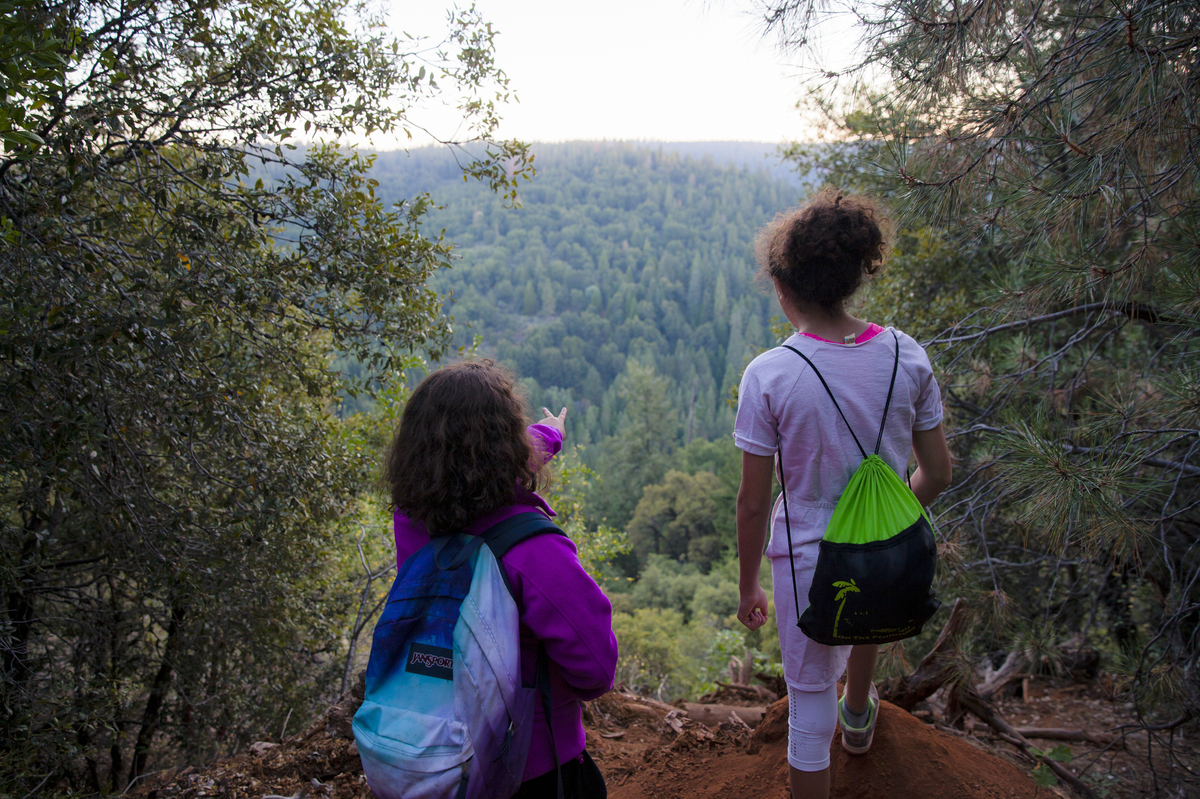 Following the predawn Fajr prayer campers go on a hike to see the sunrise.

It's something other American summer campers probably don't think about. But at this camp, the address is given to people only once they register, to keep it safe. After the Sept. 11 attacks, the camp was threatened.

And there are sessions with campers on how to deal with anti-Islamic rhetoric, which is on the rise.

After a day of swimming and a night of telling jokes, a pre-dawn prayer followed. Campers practiced a hymn while sitting on mats, surrounded by pine trees as the sun rose above them.

"Oh God, help me to do good things and reject awful things and help me to love those in need, please forgive me and have mercy on me."

Asifa Quraishi-Landes, the eldest daughter of the founders of this camp, gives a seminar on how to answer hostile and misinformed questions about being Muslim, like, "Why do Muslims lie and want to change American law?" 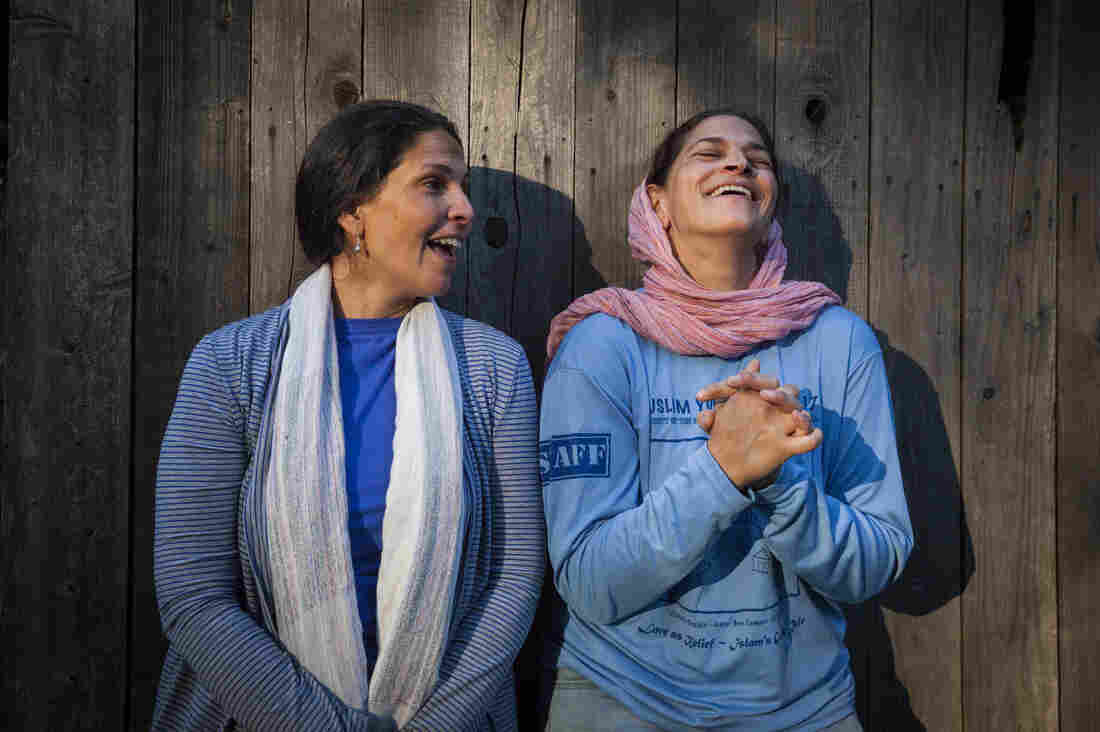 Amira Quraishi (left) and Asifa Quraishi-Landes are among the next generation that now runs the camp founded by their parents. Maggie Starbard for NPR hide caption

"Here's the thing that's really important for us to know and to say," she tells a group of teens and adults. "That Islam itself says that I have to follow the laws of the land that I live in, that is actually part of Sharia."

Quraishi-Landes is a scholar of both constitutional law and Islamic jurisprudence, or Sharia, at the University of Wisconsin Law School. Sharia has many forms of interpretation that guide the way Muslims live, like how they inherit or what they can or cannot eat. It's a lot like Catholic canon law or halacha, Jewish law. But anti-Muslim hate groups tell people it's a threat to the American way of life.

It's a pretty heavy topic for summer camp. But that's what being Muslim in America is today, Quraishi-Landes says.

"Being yourself as a Muslim"

She and her sisters grew up in the camp, and now their children learn about Islam here too. Sometimes she has to force her teenage son to come. 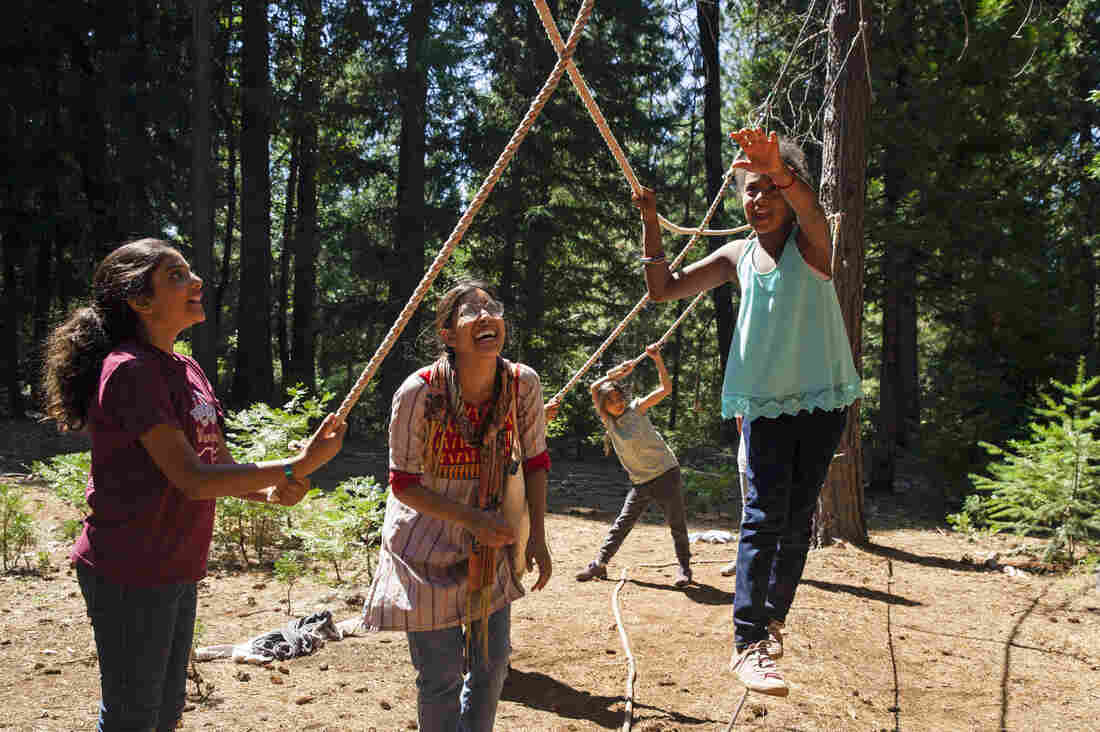 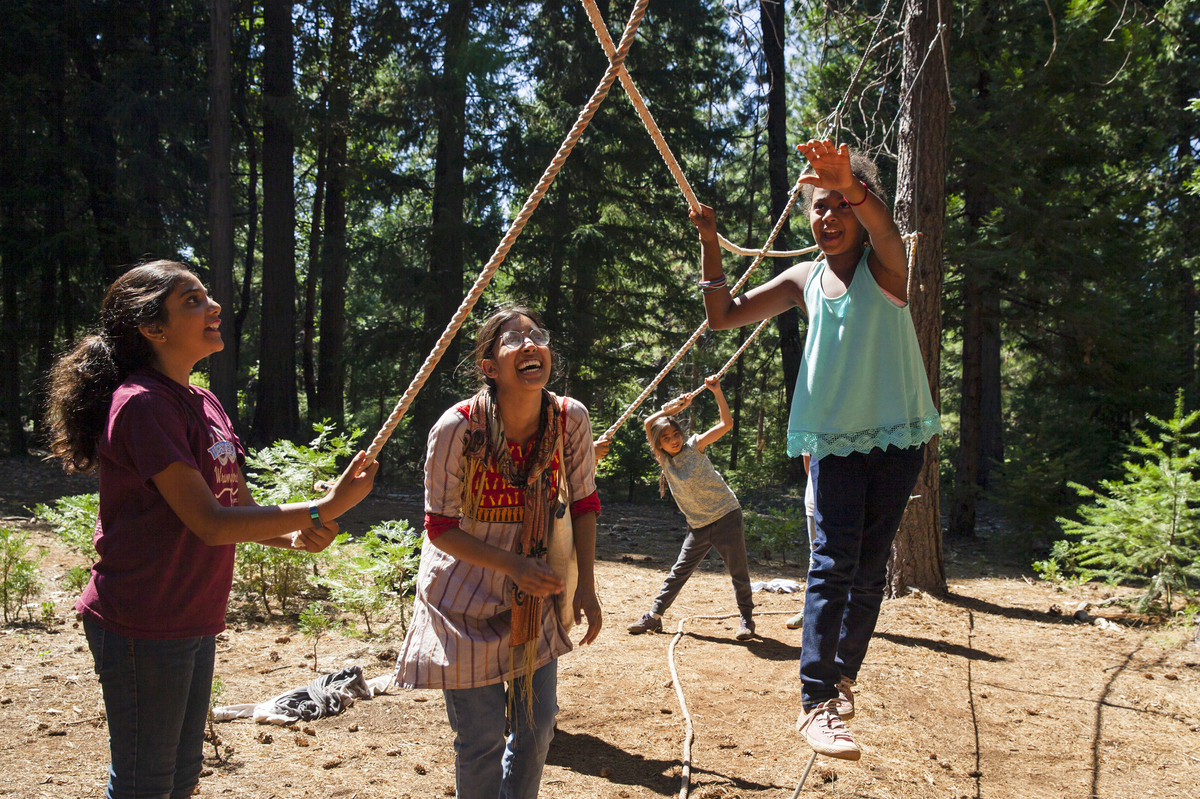 "The environment here creates a balanced Islamic education and [an education on] being yourself as a Muslim that I cannot create anywhere else for him," she said. "This is my shortcut. ... It's the kind of Muslim education I can give my kids without sitting down with a workbook. It's fun. It's fun to be a kid; it's fun to be a Muslim kid too."

Another camp organizer, 37-year-old social worker Sakeena Mirza, who is Quraishi-Landes' cousin, says this camp is more important than ever for her children.

"There's so much distaste for being Muslim in the world and the country so there's a push away from the faith," she says.

At school, Mirza's kids watch other children pretend to be terrorists and shout Allahu Akbar (God is greatest) -- a term that is holy to her and her family.

"These are the types of the environments where being Muslim feels vile and it's hated and I feel like I didn't have to deal with that when I was younger," she said. "I felt different. I didn't feel hated."

Left: Leya Khan (from left), Sarah Khaled and Asifa Quraishi-Landes during Jumu'ah prayer. Right: Keeno Ghadbian,14, listens to a sermon. Jumu'ah is held every Friday and is more formal than the other prayers. Maggie Starbard for NPR hide caption

This year the kids, teens and young adults have classes that explore the Islamic saying "Love for your brother, what you love for yourself."

Over the years the themes have changed. Back in the '60s, the themes were simple and focused on heritage — like in 1963 when it was literally "Our Islamic Heritage."

Today, the themes deal with the current moment, when hate crimes against Muslims have spiked.

Last year it was "Indeed, with hardship there is ease."

This year, in almost all the classes, bullying comes up. A poll by the Institute for Social Policy and Understanding suggests Muslim children are bullied more often than their Jewish or Christian peers at school.

Zareena Grewal, a parent and historical anthropologist at Yale, leads a class of middle-schoolers at camp. She asks the group if people think Muslims are weird.

"No, they just call me a terrorist," one student says. 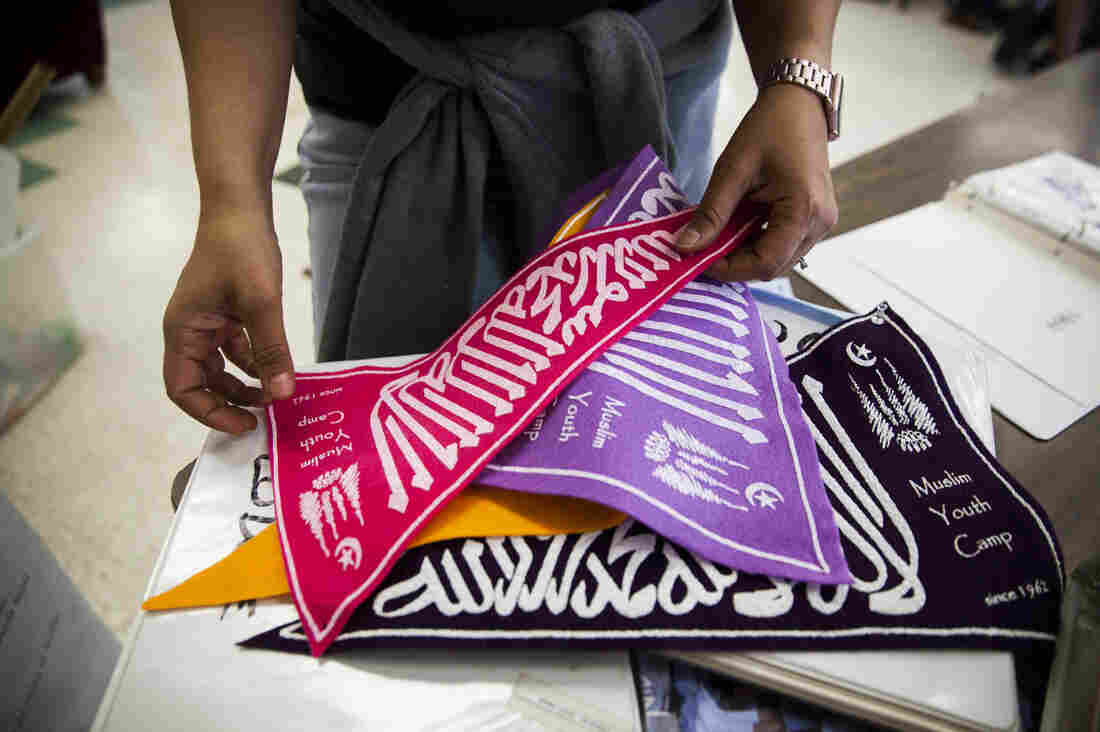 At the end of the week campers receive banners for various accomplishments such as reciting the Kalimah Shahadah in Arabic and English or reading the entire Quran. Maggie Starbard for NPR hide caption

"They call you a terrorist?" Grewal asks.

"They'll be like, 'Guys he has a bomb on his watch, run. He's going to bomb the school,' " he says. The camp teachers asked that NPR not use the kids' names while discussing sensitive topics for fear they would be further bullied.

The boy shrugs. Says he doesn't care. Other kids nod.

At the end of Grewal's class she asks a question.

"If you can imagine those people at your school were able to see us here at camp playing basketball, or telling jokes at campfire or just being ordinary campers, do you think that would change their views?"

"No, they wouldn't care," the campers respond. "They'd probably think it's a terrorist training camp."

But one boy disagrees.

"If they saw us in the classes and learning about all this stuff they would know that we're humans, not just animals."

As the class ends, the boys and girls start teasing each other and run outside for free time. 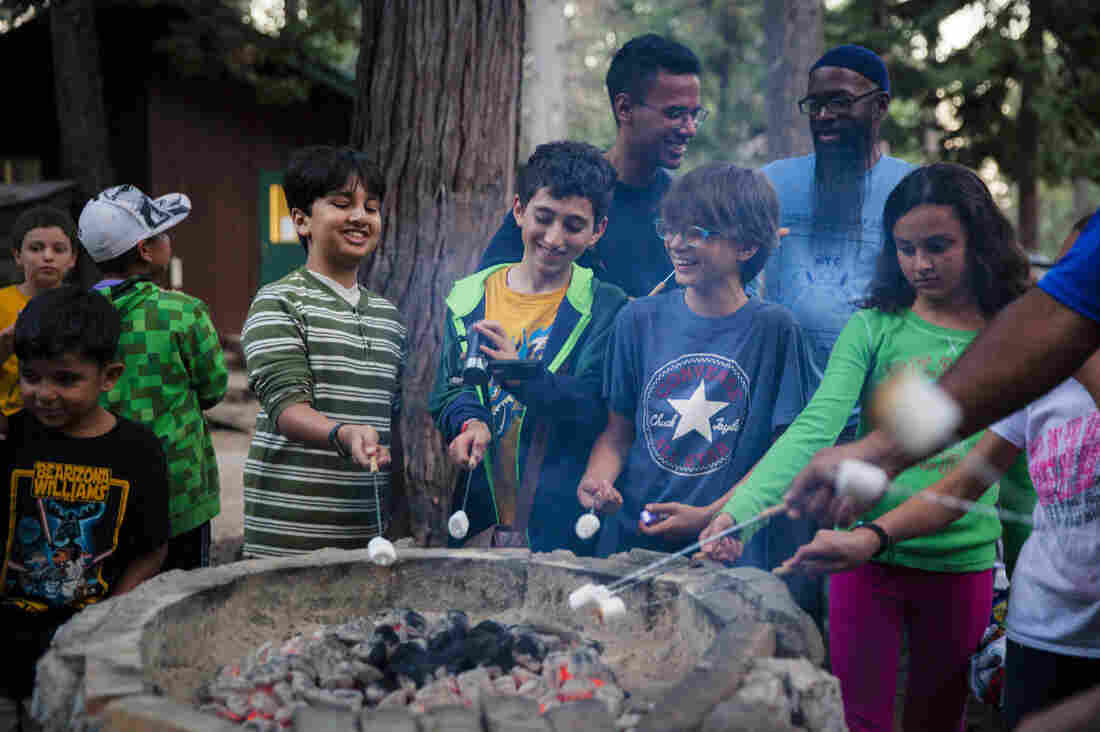 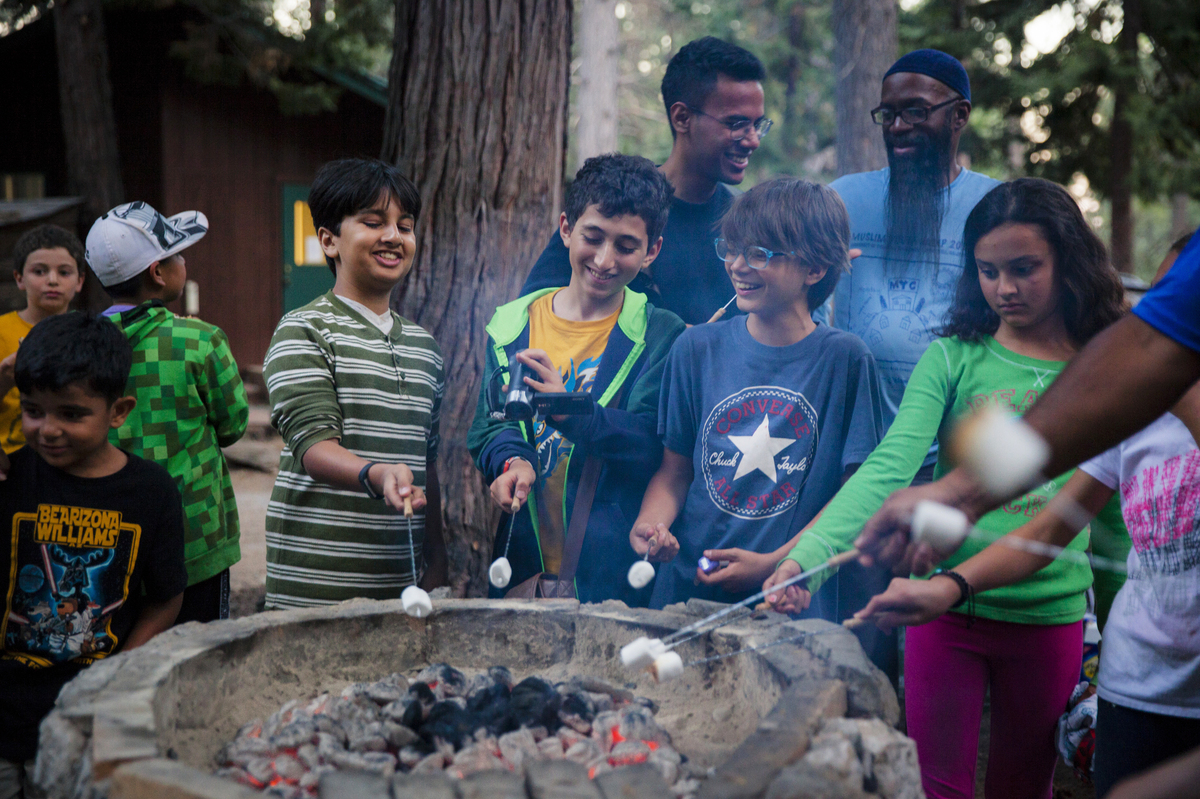