Accessibility links
Steve Bannon Out As Chief Strategist, White House Says Earlier this week, President Trump offered only halfhearted support for the man considered instrumental in getting him to the Oval Office. 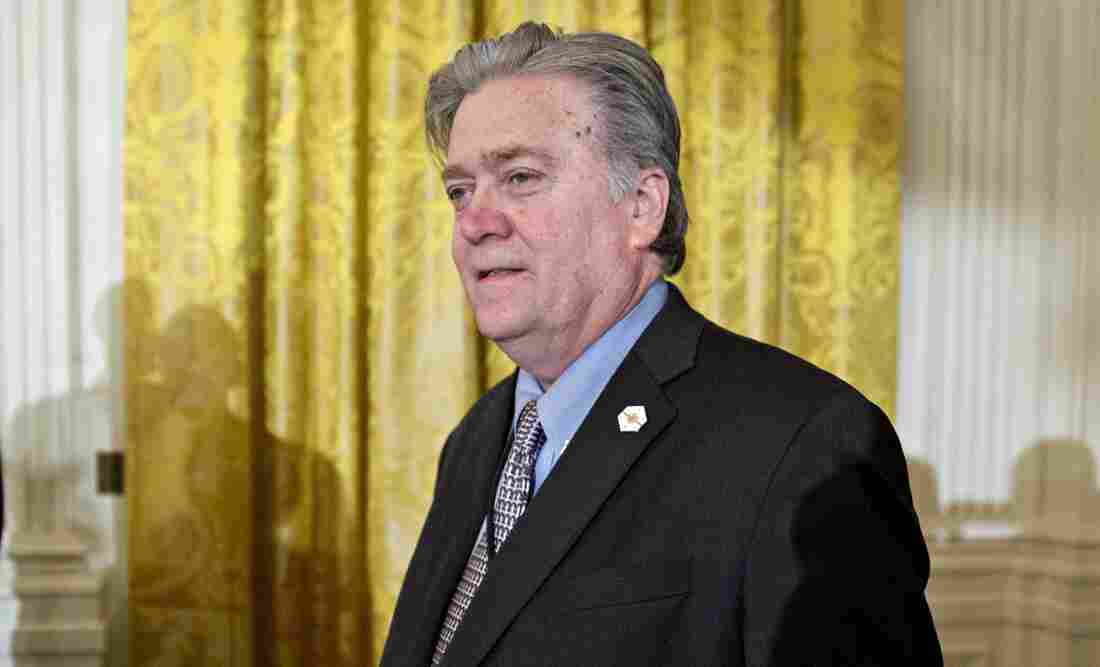 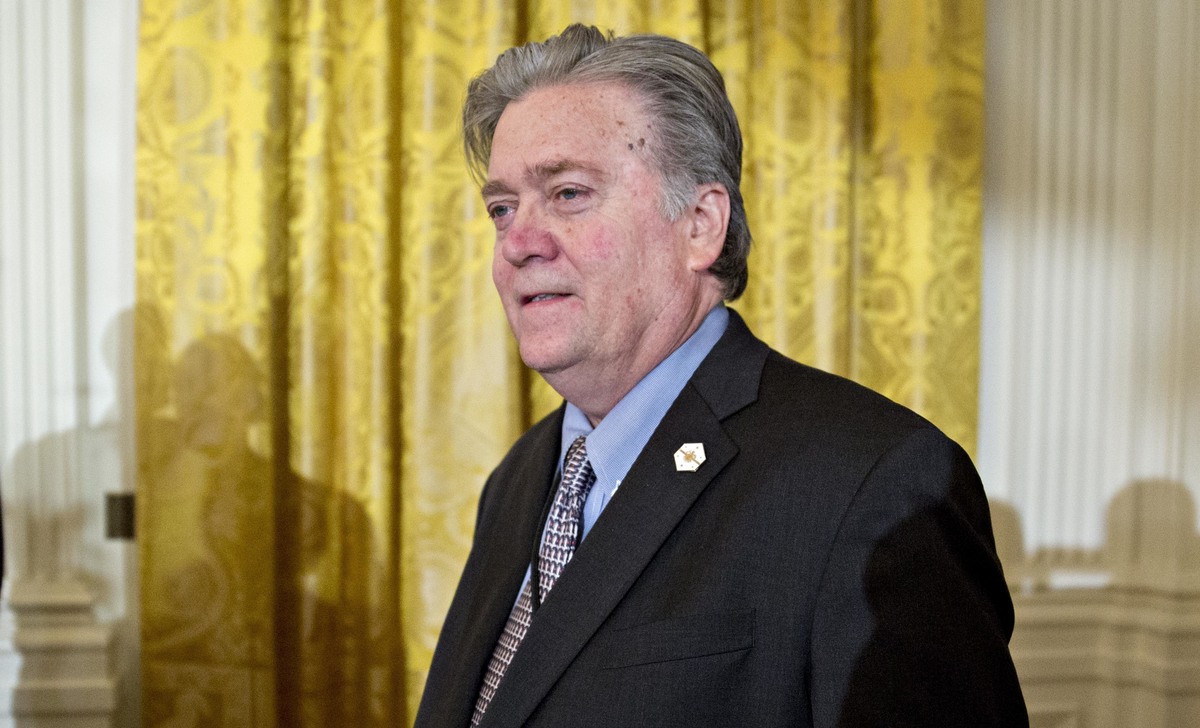 Steve Bannon arrives at a swearing-in ceremony of White House senior staff in the East Room of the White House on Jan. 22.

The White House described the departure as a mutual agreement between Bannon and chief of staff John Kelly.

"We are grateful for his service and wish him the best," said press secretary Sarah Huckabee Sanders.

Bannon has been a larger-than-life character in Trumpworld: a right-wing provocateur whose rumpled wardrobe and radical politics belied his background at Goldman Sachs and Harvard Business School. (Bannon made a small fortune running his own investment banking firm. His compensation for one deal included a stake in residuals from the TV series Seinfeld.)

Breitbart News, the website he ran before taking his job in the White House, also announced Friday that Bannon would be returning as executive chairman.

Bannon took over as Trump's campaign chairman a year and a day ago, and he was credited with bringing much needed focus and discipline to what had been a seat-of-the-pants operation. Bloomberg Businessweek writer Joshua Green argues that without Bannon's skill at mobilizing disaffected white male voters, "I don't think Donald Trump would have been elected president."

The president, who doesn't like sharing the spotlight, often bristled at news stories that painted Bannon as the mastermind of his unlikely 2016 victory.

All That White House Drama Might Be Sexy, But It's Beside The Point

Trump offered only a halfhearted defense of his chief strategist, who has had a target on his back ever since joining the administration.

In an interview with the conservative magazine The Weekly Standard on Friday, Bannon said that he only ever planned on staying in the administration for a year anyway.

Long before he had a formal role in the campaign or the administration, Bannon had been a cheerleader for Trump as head of Breitbart News. The website trumpeted that he would be returning just a few hours after his departure was announced by the White House, saying he had chaired the site's evening editorial meeting.

"The populist-nationalist movement got a lot stronger today," said Breitbart News Editor-in-Chief Alex Marlow, according to the article. "Breitbart gained an executive chairman with his finger on the pulse of the Trump agenda."

Bannon took control of the website in 2012 and turned it into a platform for the so-called alt-right. His nationalistic, anti-immigrant and anti-Muslim views proved a good match for Trump's.

"I'm an economic nationalist," Bannon told the Hollywood Reporter shortly after the November election. "The globalists gutted the American working class and created a middle class in Asia. The issue now is about Americans looking to not get f***** over."

Bannon told The Weekly Standard, however, that now that he is gone, those views could take a back seat.

The take-no-prisoners style he is referencing, which was so successful during the campaign, proved a liability once Trump and Bannon reached the White House. The original shock-and-awe travel ban spearheaded by Bannon was quickly rejected by federal courts. His efforts to strong-arm lawmakers into passing a repeal of the Affordable Care Act backfired. And Bannon feuded openly with other White House staffers, including Jared Kushner, the president's son-in-law; national security adviser H.R. McMaster; and National Economic Council Director Gary Cohn.

"Bannon really believes this stuff to a degree that's almost scary," Green told Fresh Air's Terry Gross. "I think that Trump is driven mainly by opportunism, by a desire to pursue whatever is going to get Donald Trump positive coverage on cable news now. And during the campaign, when nationalism — when Bannon's nationalism seemed to work for him, that was what he would espouse. But when that stopped working for him in February, after he became president, he was happy to bring in people [like McMaster and Cohn] who nationalists abhor."

Bannon raised eyebrows earlier this week when he granted an unsolicited interview to The American Prospect, a liberal magazine.

Although he was one of the few White House staffers who embraced the president's remarks on the deadly violence connected to a white nationalist rally in Charlottesville, Va., Bannon dismissed the white nationalists at the center of the violent protests as a "fringe element," "losers" and a "collection of clowns," in the interview, published Wednesday.

It was a surprising comment from a man who successfully harnessed white nationalism, first at Breitbart and later in the Trump campaign.

The Anti-Defamation League applauded Bannon's departure on Friday. In a statement, CEO Jonathan Greenblatt said, "Hate has no place in our nation: not in our town squares and not in our White House."

House Democratic Leader Nancy Pelosi of California called the development "welcome news" but added, "The Trump Administration must not only purge itself of the remaining white supremacists on staff, but abandon the bigoted ideology that clearly governs its decisions."

Bannon argued in the American Prospect interview that it's self-defeating for Democrats to overplay "identity politics."

"If the left is focused on race and identity, and we go with economic nationalism, we can crush the Democrats," Bannon said.

Bloomberg's Joshua Green predicted on Fresh Air in July that Bannon would "keep fighting for this idea of an anti-immigrant nationalism, come hell or high water."

Bannon told Green on Friday he would be "going to war" for the president, now pursuing his agenda from outside the White House.

"If there's any confusion out there, let me clear it up: I'm leaving the White House and going to war for Trump against his opponents — on Capitol Hill, in the media, and in corporate America," he said.