Accessibility links
California Prepares For An Eclipse Of Its Solar Power On a sunny day, California gets up to 40 percent of its energy from solar power. Monday's total eclipse isn't just a scientific spectacle, it's a major concern for the state's power grid. 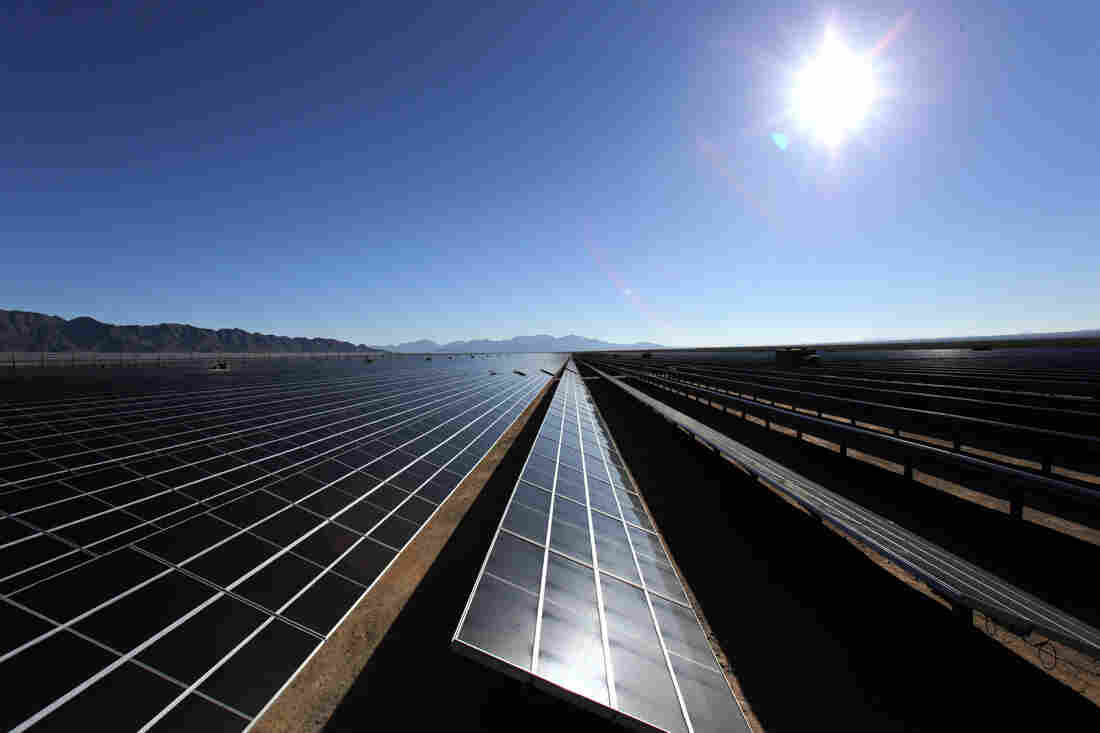 Solar cells sit in the sun at the Desert Sunlight Solar Farm in Desert Center, Calif. The people who run California's electric grid expect the solar power output to be cut roughly in half during the eclipse. Marcus Yam/LA Times via Getty Images hide caption 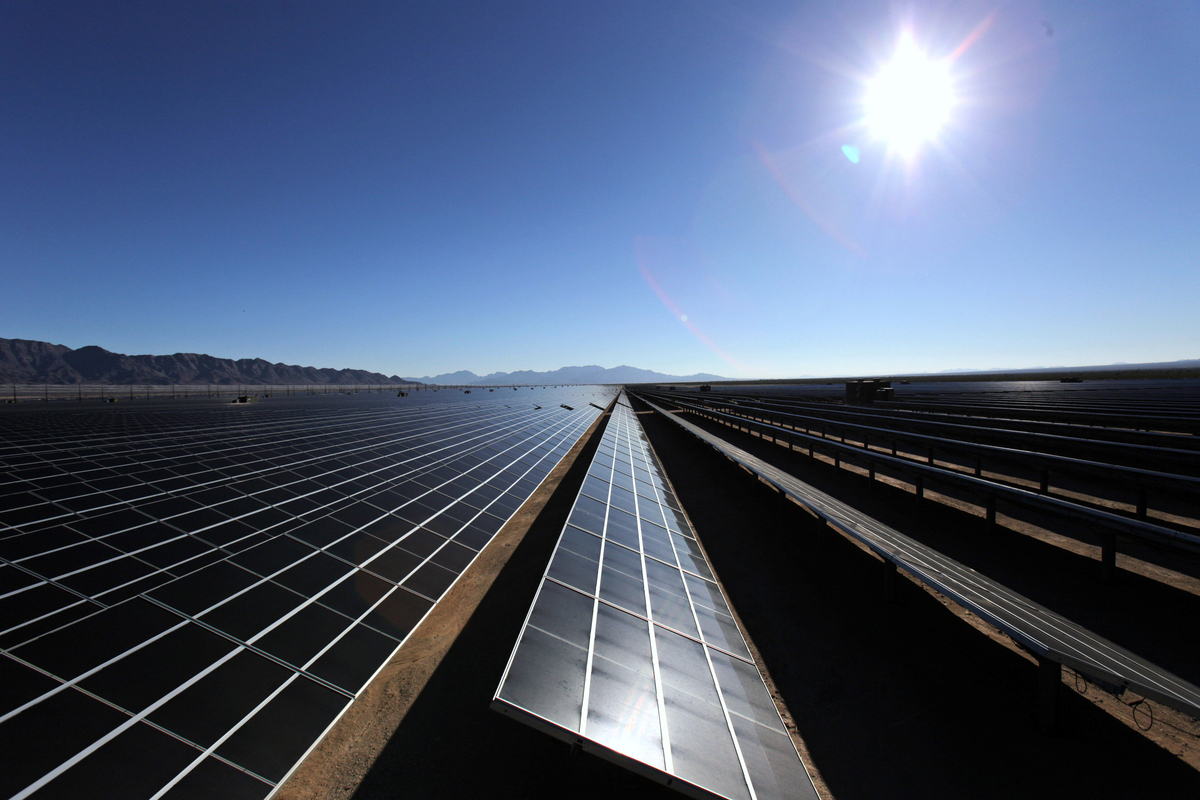 Solar cells sit in the sun at the Desert Sunlight Solar Farm in Desert Center, Calif. The people who run California's electric grid expect the solar power output to be cut roughly in half during the eclipse.

Spectators around the country are gearing up, eclipse glasses at the ready, for the solar eclipse on Monday. But another group — perhaps more anxious than eager — is preparing as well: the people who run California's electric grid.

California is home to almost half of all the solar power in the country. So even a partial loss of the sun will mean a major dip in the energy supply.

Here's What You Need To Know About The Total Solar Eclipse

"We're doing a lot of coordination, a lot of preparation," says Deane Lyon, a manager at the California Independent System Operator (ISO), which manages about 80 percent of the state's electric grid. "It's probably the most work this company has done to prepare for a three-hour event in our history."

Solar power already comes with up and downs, in the form of clouds.

"So this was a particularly cloudy day," says Jan Klube of Enphase, pulling up a graph showing the solar output from one California home. The Petaluma-based company monitors rooftop solar systems around the country day in and day out.

To show how a single cloud can make a difference, he points to the afternoon hours, when the output dips by about a third. "You see the big drop, so there's a cloud coming and going," he explains. "That's why you see the zigzag."

If your solar panels are in the path of totality during the eclipse, "it will go all the way to zero," he says.

California isn't squarely in the path, but the moon's partial shadow will obscure 90 percent of the sun in the north, down to nearly 60 percent in the south. That's more than enough to cause some anxiety for the people who have to keep California's lights on.

It's unprecedented because solar power has been booming in California. Some days, it makes up as much as 40 percent of the state's power supply.

While the full totality lasts only a few minutes, the moon's shadow will partially obscure the sun for several hours. California expects the solar power output to be cut roughly in half over that time.

During the eclipse, hundreds of thousands of buildings — both residential and commercial — that normally count on rooftop solar will need to switch to grid power instead.

Add that to the loss from big utility-scale solar farms and California will need to fill a power gap equal to what 6 million homes use.

"Luckily, we had a really good water year this year," Lyon says. "So we'll have some pretty good flexibility on the hydro." That wasn't the case during the past few summers, when reservoirs were low due to the drought.

What hydropower dams can't make up, natural gas power plants will. That includes large power plants that can respond quickly, as well as smaller "peaker" plants. The California ISO is scheduling extra power ahead of time to try to ensure the needs are met and that power prices don't spike.

The tricky part is that the sun will disappear and reappear two to three times faster than normal, which means the grid will have to be balanced carefully. Supply always has to meet demand, otherwise you get blackouts.

Grid operators say they're prepared because, with renewable energy on the rise, they've learned to deal with power dips every day. In recent years, the California ISO has beefed up its modeling and forecasting to handle the swings.

Other leading solar states will see an effect, too. Duke Energy in North Carolina expects to lose about 90 percent of its solar supply, though it has about a quarter of what California uses. It plans to use natural gas power plants to fill in the gap. NV Energy in Nevada expects to see an even smaller dip.

The next total eclipse, in 2024, could be an even bigger challenge for California and other states, when even more solar is in the mix.

"It'll be a major thing for the people running the grid at that time to manage," Lyon says. "It won't be me. I'll be retired for hopefully several years by then."

Energy officials are asking Californians to turn off lights and conserve energy for several hours on the morning of Aug. 21, just to give the grid a little extra help.

A version of this story also appeared on KQED's website.