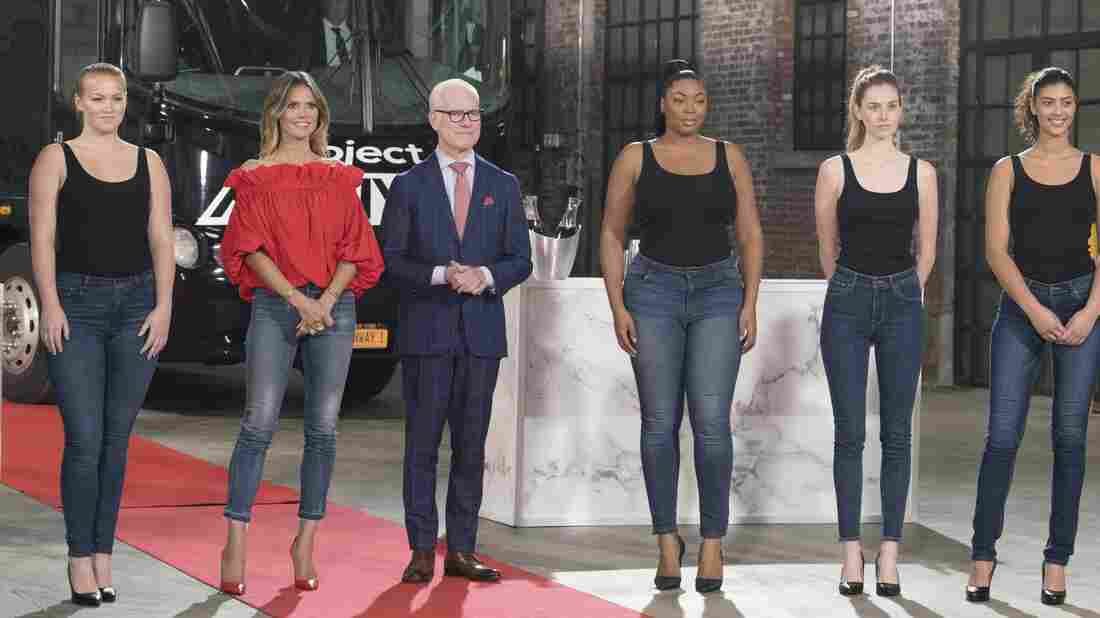 Heidi Klum and Tim Gunn pose with some of the models working in the 16th season of Lifetime's Project Runway. Barbara Nitke/Lifetime hide caption 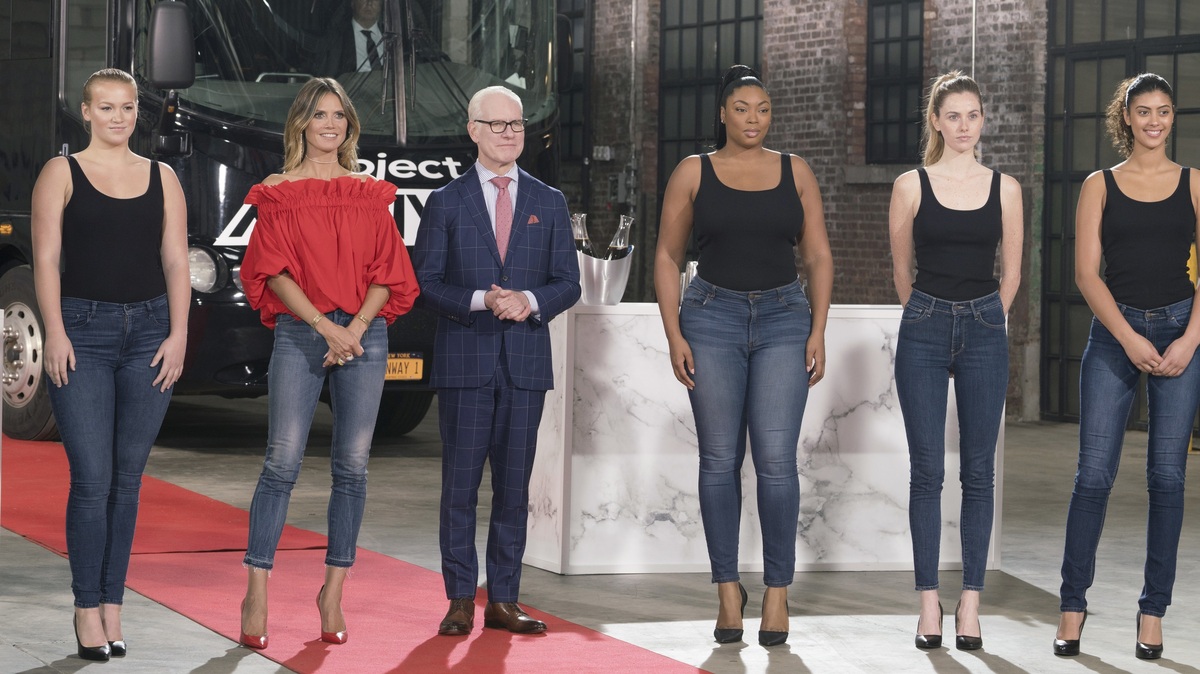 Heidi Klum and Tim Gunn pose with some of the models working in the 16th season of Lifetime's Project Runway.

The hidden immunity idol. The U-Turn. The Golden Power Of Veto. Last Chance Kitchen. These phrases may not mean much to you, but to viewers of long-running reality franchises (specifically Survivor, The Amazing Race, Big Brother and Top Chef), they reflect a basic tenet of competition shows: Now and then, you have to throw your competitors a ... curve.

The history of these twists is mixed at best. Very often, they overcomplicate what was originally, believe it or not, devilishly simple. Survivor, for example, wound up with so many idols and advantages and immunities in play at one point this season that there was no vote: Only one person was even eligible to go home. It's like a hockey game in which an entire team is suspended for fighting, so one guy with seven teeth goes out onto the ice and forfeits. The Amazing Race was originally a show with little focus on personal animus, because there wasn't much to do with it, but once it became possible to stab people in the back (or the front), the motives to do so became a much bigger part of the storytelling. And ... well, there's never any real point to analyzing Big Brother, unless you like sobbing or abject despair.

Project Runway, which opened its 16th season on Wednesday night, has fiddled with its structure from time to time: the "Tim Gunn Save," the introduction of quickie mid-runway-show challenges, and various tweaks to the finale have been thrown against the wall to see what sticks. But this season, the producers decided to make a change to the competition itself — to the very design and execution process that forms the backbone of the show. (Or, as it were, the zipper.) Specifically, the collection of models for whom the designers are designing are a variety of sizes. As Tim Gunn says, they range from size 2 to size 22.

Runway has a long tradition of periodic challenges, roughly once a season, that require the designers to design for what the show typically calls "real women" who are not models. (Side note: All women are equally real, provided they are made of living organic material and not, for instance, plastic or Popsicle sticks.) They might be moms or friends or women who want makeovers, but very often, at least some if not all are bigger, moderately or substantially, than the usual runway models. This has led to some ugly moments for designers who think plus-size women are too inconvenient, ungainly or hip-equipped to deserve clothes. (Some of them honestly seem on the verge, at times, of shouting, "WHO CARES WHAT UGGOS ARE WEARING?") But even in the best-case scenarios, the "real women" episodes have often become stories of how decent and admirable designers are for boosting the self-esteem of women who aren't models. Too often, these "real women" are presented as either inspirational or pitiable.

This season, though, the women are all apparently models, and they seem to all feel just fine about their bodies, which places a different spin on the whole thing. The show has added an element in which the models have a moment in a room with a mirror where they can give their thoughts on what they're being asked to wear. This seems particularly important in cases in which designers are often working with body sizes they haven't dealt with before (though some have). It also sets up the opportunity for some serious smack talk about hideous clothing, even though that didn't happen in the first episode. A girl can hope.

Of course, there is a body positivity aspect to all this, because it's sure nice to see a variety of models dress up in nice clothes and be treated as if they deserve to look beautiful just like anyone else does. But more than anything, from a brutally pragmatic perspective, what this introduces is different things to opine about — because opining from the comfort of your home and the slovenliness of your pajamas (note: might just be me) is what a show like Project Runway is all about.

Take, for instance, the outfit that Brandon, a menswear designer who had rarely worked with any women, let alone plus-size women, made for his model, Liris, in the season premiere Wednesday night. She is one of the plus-size models who says she's "known for [her] hourglass shape." At first, Brandon acted as if he had been asked to make a snug-fitting swimsuit for a lumpy octopus, in terms of the level of difficulty. But he ultimately made a crop top and a skirt that Liris liked and the judges scored highly.

Here's the thing: I haaaated it. It looked to me like bafflement made flesh — er, fabric — like what he would get if he had said, "She's somewhere around this big," and then just cut out a couple of templates and lashed them together. He got away with it, largely because he put a big slit in the skirt that made it look far less matronly than it would have been otherwise. But Liris said she was known for her hourglass shape, and this looked like paper doll clothes to me. She could have been shaped like an hourglass or a pint glass; you couldn't tell from that outfit.

But what matters isn't whether you like the outfit or don't — what matters is that this is a new debate. Whether a woman who is perhaps a size 22 and loves her body is better off wearing clothes that emphasize her shape or camouflage it is something people really argue about. It's even something where I've sometimes taken issue with Tim Gunn specifically, when it seems like he is advocating for everyone to try to look tall and skinny, no matter their actual bodies. (Normally, it's best to keep your nose in your own cowl neck when it comes to other people's clothes, but fashion competitions are an exception.) And when you've been talking for 15 seasons about mother-of-the-bride this and costume that, it's nice to get some new material.

That's not the only new element, either. There is a Muslim designer named Ayana who designs clothing she describes as "modest," but who busted out a gorgeous, shimmery, slithery silver frock in the premiere that, as she said herself, defies the idea that modesty has to mean either staleness or playing it safe.

Most late-season changes to existing shows are terrible: the hidden immunity idol is the Cousin Oliver of Survivor, and I will never accept it, particularly now that the show "hide" it in the same way you "hide" the Easter eggs from a bunch of 4-year-olds, meaning "you won't see it unless you happen to look where it is." But giving designers something to do, and audiences something to talk about, besides sleeveless sheath dresses and corset tops and skirts made out of napkins? They've got something there.