Accessibility links
Sports Jersey Or Gang Symbol? Why Spotting MS-13 Recruits Is Tougher Than It Seems As the ruthless MS-13 gang targets younger members for recruitment, one of the challenges facing school administrators and law enforcement is figuring out who is in the gang. 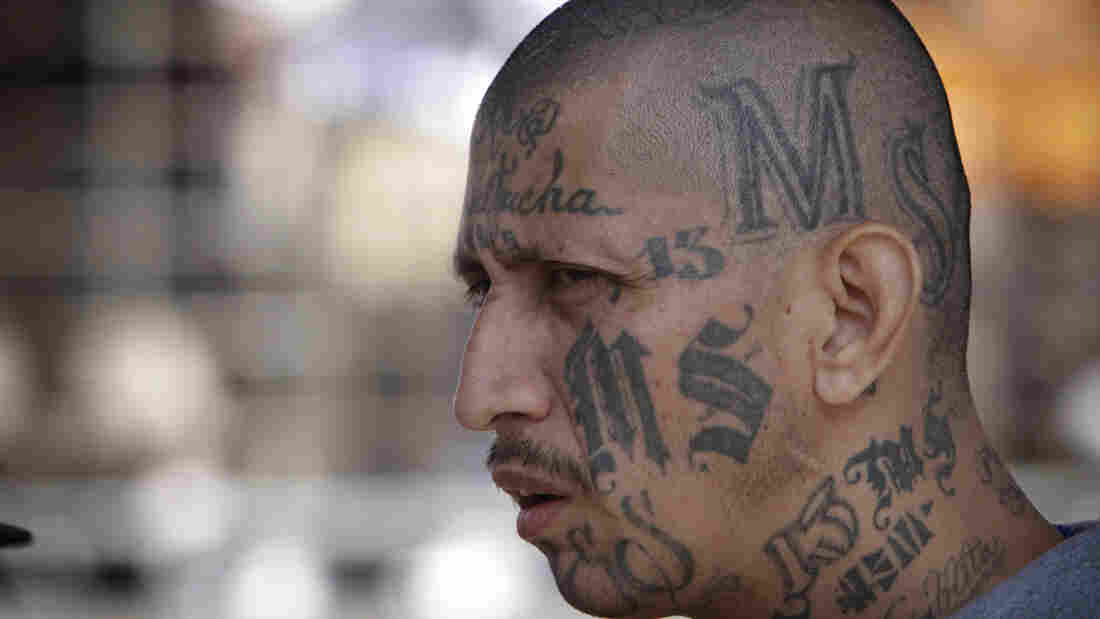 An MS-13 gang member at a prison in Salvador. As the gang spread from Central America to the U.S., authorities say its symbols became more subtle. Luis Romero/AP hide caption 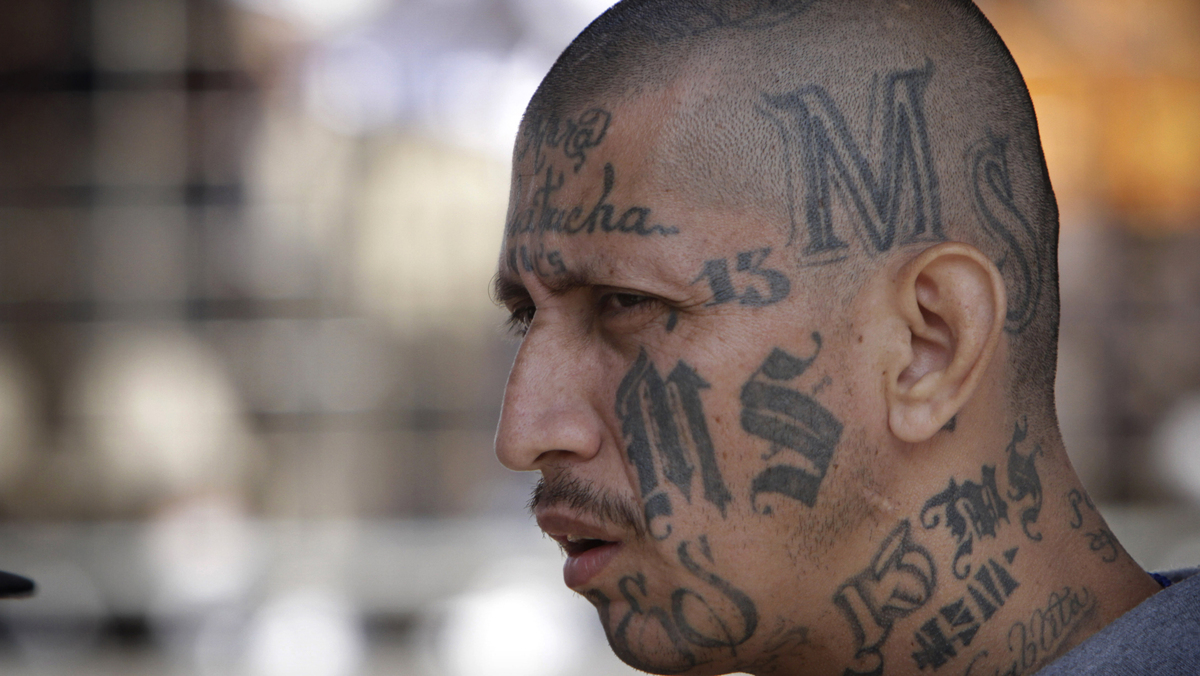 An MS-13 gang member at a prison in Salvador. As the gang spread from Central America to the U.S., authorities say its symbols became more subtle.

Immigration authorities picked up and detained a 19-year-old high school student from Long Island in New York this summer after he was suspended from school for doodling the number 504 in a textbook and drawing devil horns on a calculator.

The number is the international calling code for Honduras, where the student grew up and where the violent international street gang MS-13 has strong ties. And bull horns are a symbol used by MS-13.

That was the only evidence against the undocumented teenager, who is now facing deportation, according to his lawyer, Bryan Johnson. NPR agreed not to name the teen or his family because they fear they will all be deported.

But the student and his mother are adamant he's not a gang member. She doesn't understand how a man with devil horns can be painted on the front of her son's school, Huntington High, and he gets in trouble for drawing horns.

The Huntington High School mascot is the blue devils. The mom says the school should not promote a symbol that students can get suspended for drawing.

Across Long Island, schools and police are under pressure to stamp out MS-13. And they're on the lookout for any sign of the brutal gang that's blamed for a string of killings there, including several high school students.

But experts say it's not always easy to identify who is a gang member, and who's not. And getting it wrong, students and families say, can have tragic consequences.

Despite Escaping To The U.S., These Brothers Are Still Terrorized By The MS-13 Gang

MS-13 started in Los Angeles in the 1980s and developed a reputation for ruthless violence.

"It's the way they carry out their violence just for the sake of violence," said Angel Melendez, special agent in charge of ICE Homeland Security Investigations in New York. They use "a machete. And a baseball. Or a rock. Or a shovel. Whatever they can find."

At first, he said, MS-13 members were easy to spot.

"Everybody thinks about an MS-13 team member and the first thing that comes to their mind is an individual with a tattoo of an 'M' and a '13' across the face," Melendez said.

As the gang spread to Central America and then back to cities across the U.S., Melendez says it became more subtle. Now members might display their MS-13 affiliation by wearing certain colors and sports team logos.

But experts caution that those gang identifiers can vary widely from one place to another. They evolve rapidly. And it's possible for police and schools to make mistakes.

"You can't really just racially profile somebody and say that they're a gang member just because they're using this hat or attire," said Alex Sanchez, a former MS-13 member who is now executive director at the non-profit Homies Unidos in Los Angeles, which works to keep kids out of gangs.

You can't really just racially profile somebody and say that they're a gang member just because they're using this hat or attire.

On Long Island, some Central American immigrants say they are being racially profiled. The American Civil Liberties Union filed a lawsuit this month against the Trump administration, alleging that undocumented teens are being "illegally" detained based on "unsubstantiated evidence" that they're gang members.

And Latino students on Long Island say that they're the only ones who get in trouble at schools for wearing clothing brands associated with MS-13, including Versace belts, Nike shoes and Chicago Bulls jerseys.

The area has a troubled history. Suffolk County police were accused of discriminating against Latinos for years. The department is still being monitored by the U.S. Department of Justice's civil rights division. And several schools on Long Island refused to enroll some undocumented immigrants a few years ago, until the state attorney general stepped in.

"It's a strict criteria," Sini said. "It usually requires several indicators before someone is confirmed as an MS-13 gang member."

Sini declined to say exactly what those criteria are, because police don't want gang members to know what they're looking for.

School districts often take their cues from police. The Huntington school district, which includes the high school by the same name, did not reply to multiple requests for comment.

"We have to make sure that our students are free from harassment from bullying and from feeling intimidated by organized gang activities," Adeyeye said.

Gang experts say schools should suspend students for serious behavior problems, like a threat of violence, but that some kids should be kept in school, where they can get the help they need.

"Let's not go immediately to kicking them out," said Meena Harris, who directs the National Gang Center, which is funded by the Justice Department. "Let's find out what's going on with that kid. Or those groups of kids. Let's get the whole human story behind it."

Sanchez, the ex-MS-13 member, says some teenagers may just be experimenting with different identities.

"Many of the young kids want to join something, they want to seek something," Sanchez said. "And if we don't provide an alternative to gangs, they choose whatever they have available for them to deal with their problems."

Sanchez says schools and police can use gang identifiers like clothing to figure out which kids need help — but only if they know how to read the signs.