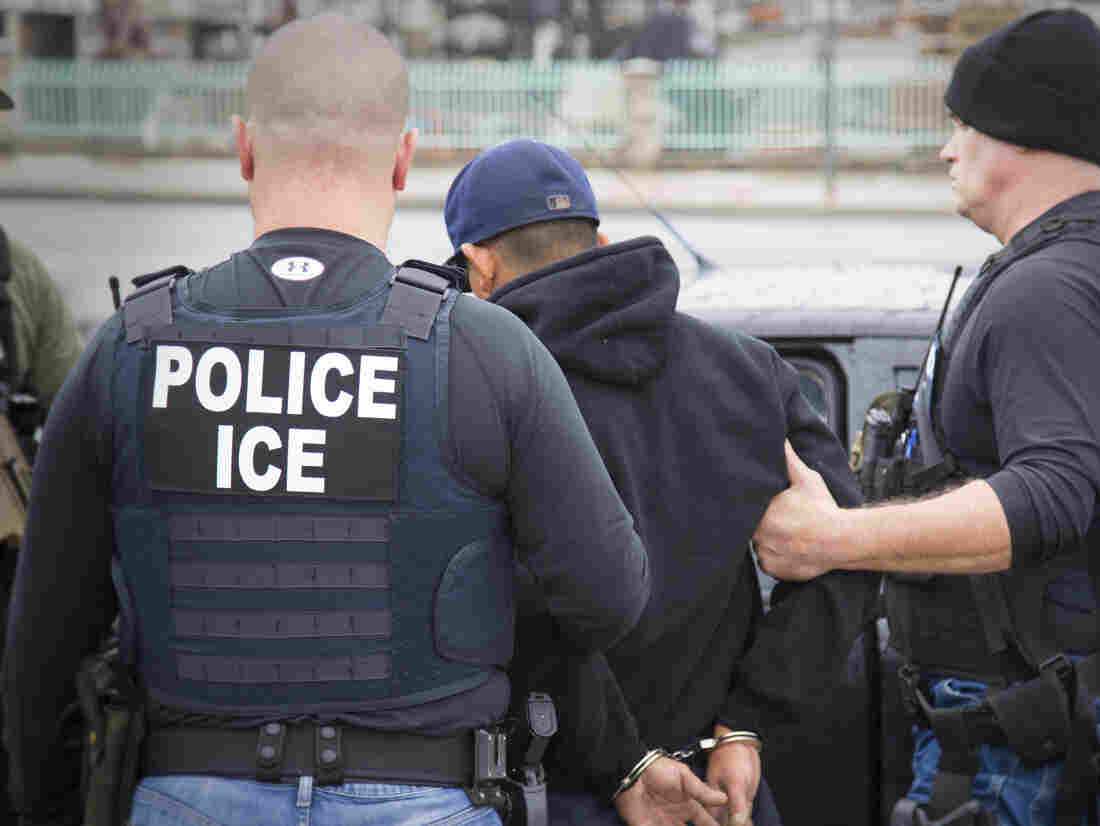 An operation which uses immigrant children to target their sponsors in the U.S. has been controversial. Charles Reed/AP/U.S. Immigration and Customs Enforcement hide caption 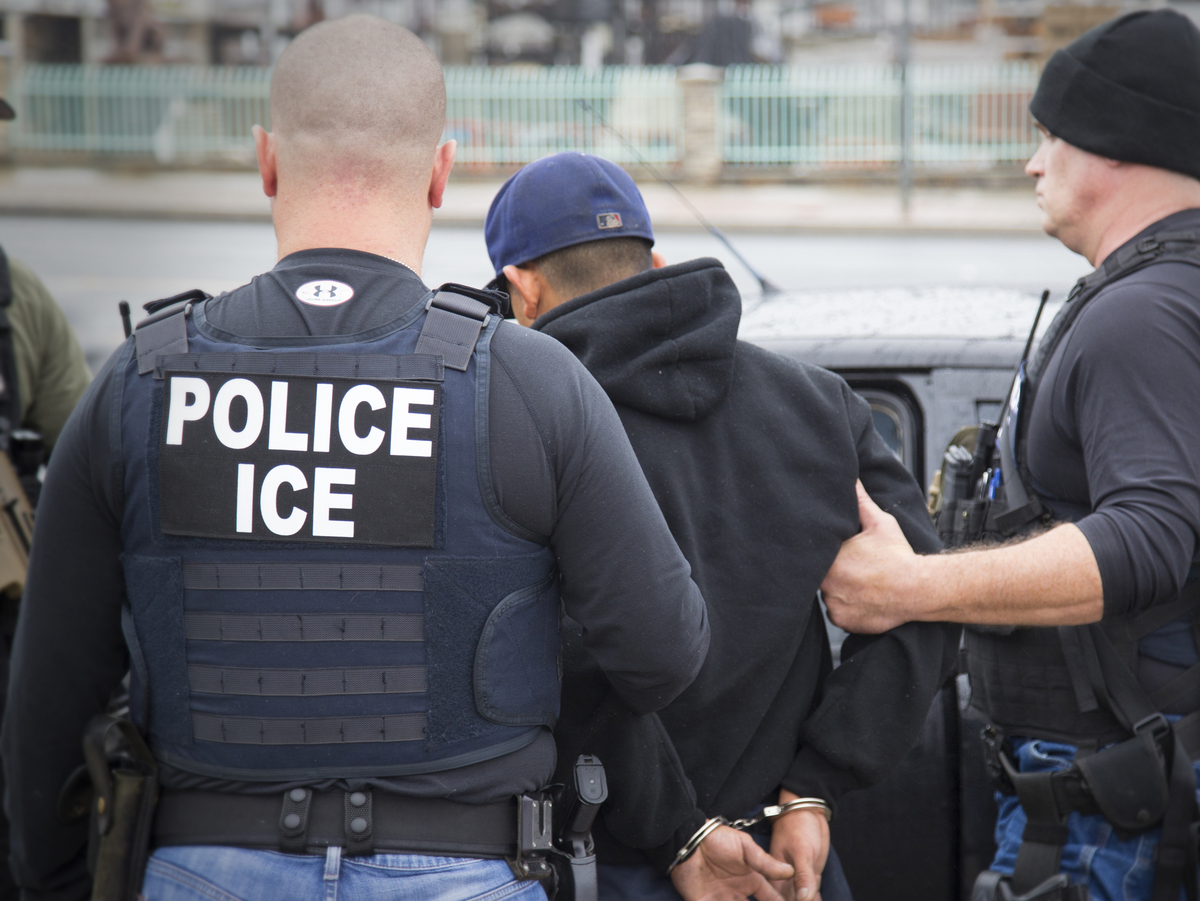 An operation which uses immigrant children to target their sponsors in the U.S. has been controversial.

Immigration and Customs Enforcement has arrested more than 400 people in an operation targeting undocumented parents and guardians who allegedly paid smugglers to bring their children to the U.S., putting them in grave danger. An ICE spokesman tells NPR the domestic phase of its Human Smuggling Disruption Initiative concluded on Friday. He said the "surge initiative" will now shift its focus to the transnational smuggling organizations that bring the children to the U.S.-Mexico border.

The operation, which uses immigrant children to target their sponsors in the U.S., has been controversial. Immigrant advocates complain it is hampering efforts to reunite families.

Critics also say it was just another ICE roundup, and didn't have the intended effect of breaking up smuggling rings. The vast majority of those arrested have been hit with civil and criminal immigration violations. Only a handful were charged with federal smuggling crimes.

"Instead they're really targeting this low-hanging fruit and using children as a tool for immigration enforcement," said Jennifer Podkul, policy director at Kids In Need of Defense.

Since the surge began in June, ICE has arrested more than 400 people. The agency says that included parents and guardians of immigrant children as well as "collateral arrests" or undocumented immigrants encountered during the operation. ICE officials say adults living in the U.S. who pay human smugglers to bring children here are aiding and abetting criminal smuggling networks.

It's remarkably inhumane to pay to turn your child over to an organization that smuggles heroin, cocaine and human beings, and say, 'I trust you to bring me a child.'

"It's remarkably inhumane to pay to turn your child over to an organization that smuggles heroin, cocaine and human beings, and say, 'I trust you to bring me a child,'" said Philip Miller, deputy executive associate director of Enforcement and Removal Operations at ICE. "The fact that we're going to take an enforcement action — whether it's criminal or administrative — against somebody who would do that I think is a good public safety act."

Abel Urbina is a 61-year-old construction worker from Honduras who is living and working illegally in Kenner, Louisiana. Earlier this year, he paid a smuggler to bring his son and his daughter, both 17, to live with him. He says they were being threatened by street gangs in their home of San Pedro Sula.

Immigration agents interviewed his kids after they were apprehended at the border, and now they're looking for Urbina. He said federal agents have come by his house twice, but he was at work both times.

"I see that they're accusing me of being a human smuggler," he said in Spanish, "because I helped my children."

Urbina fears his days in the U.S. are numbered. He said his wife died, and he's the sole provider for his teenaged children.

There's Health and Human Services, which is charged with taking custody of underage migrants fleeing violence and poverty in Central America. The agency finds them sponsors — often a family member who lives in the U.S. Sponsors undergo a background check, and they're supposed to ensure the young person's wellbeing, and make sure they show up for court dates.

Then there's Homeland Security, which has chosen to target these same sponsors in order to choke off revenue to international smuggling rings.

But one former government official says the enforcement operation is hindering the placement of immigrant children in households because sponsors are afraid to pick up the kids. That means they can end up living in government-run shelters indefinitely.

"My former government colleagues are telling me that these actions have had a chilling effect on the willingness of sponsors to come forward," said Robert Carey, who left in January as head of the Office of Refugee Resettlement — the agency in charge of so-called "unaccompanied children."

"The goal of the program is to ensure they can be safely reunited with a sponsor who has been verified," he said. "It's not an ideal situation for any young person to stay in institutional custody for an extended period of time."

These parents who've acted to try to save their childrens' lives are being punished now for being a good parent.

The Office of Refugee Resettlement has been swamped with immigrant children in recent years. From 2014 to June of this year, the agency took in 170,000 unaccompanied children. By law, the agency must feed, shelter, and provide medical care for them.

ICE says that smugglers cynically take advantage of this hospitality. They know when these young travelers surrender at the border, the U.S. has to accept them and deliver them to a sponsor. That's less work for the smuggler.

"That's not what the system was ever set up for. The system was set up to ensure the protection of children, not to finish a smuggling conspiracy," said Jack Staton, acting assistant director for ICE Homeland Security Investigations.

More than 300 civil rights groups, churches and others signed a strongly worded letter to Elaine Duke, acting secretary of Homeland Security, last week. They expressed their "deep concern" over the impact the ICE operation is having on immigrant families.

"If a desperate mother gets a terrified call from her daughter in Honduras who says that somebody is going to rape her or kidnap her or kill her, that mother is going to find a way to keep her daughter safe on what she knows is a dangerous journey," said Emily Butera, senior program officer at the Women's Refugee Commission, which signed the letter.

"And these parents who've acted to try to save their childrens' lives are being punished now for being a good parent."

In the audio version of this story it's said that all 400-plus arrested were sponsors of unaccompanied children. Immigration and Customs Enforcement clarifies that the arrests included both sponsors and collateral arrests — other unauthorized immigrants encountered during the course of the operation.