Accessibility links
Trump's Handling of Charlottesville Clouds GOP Tax Push While the president was laying blame on "both sides" for violence in Charlottesville, Republicans were meeting to hammer out a tax overhaul. But they worry about whether Trump can make the sale. 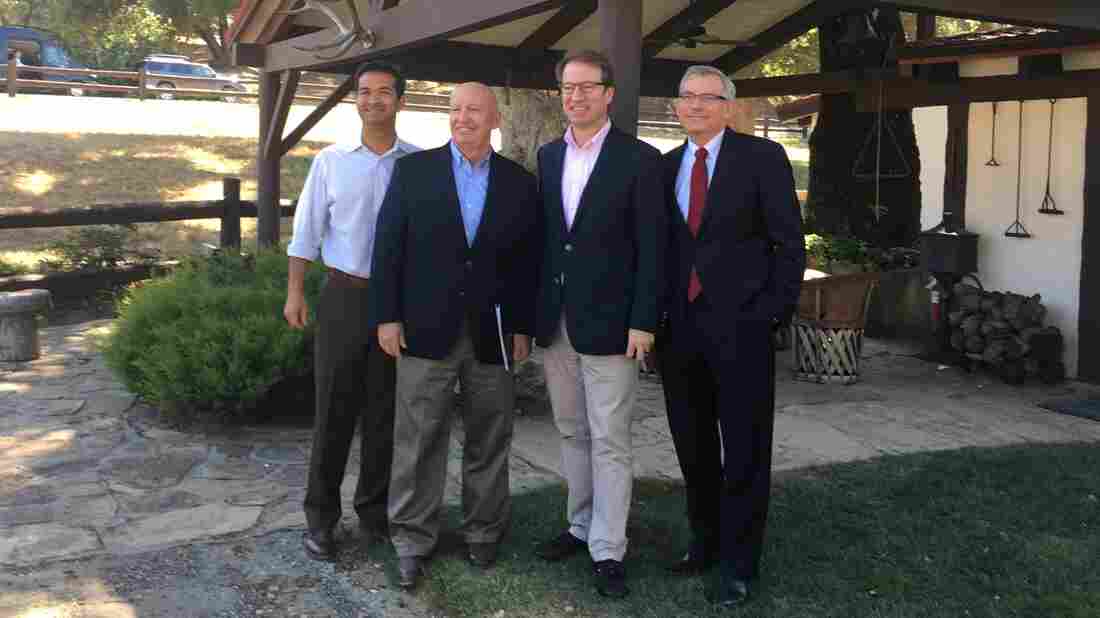 Before any hard battle, it's common to seek a little spiritual guidance.

In preparation for the coming fight this fall to overhaul the entire federal tax code, a group of House Republicans on the Ways and Means Committee traveled this week to Rancho del Cielo — the ranch of former President Ronald Reagan, outside Santa Barbara, Calif.

The ranch is where Reagan signed one of his major tax cuts into law, and the GOP is working this month to capture some of that Reagan-era magic to deliver a modern tax bill of its own.

"We're focused on, and moving forward, legislation this year — bold legislation— to reduce taxes on every American and grow jobs and paychecks nationwide," House Ways and Means Chairman Kevin Brady, R-Texas, said in a speech in front of the ranch.

3 Questions About A Pro-Russia Congressman's Meeting With Julian Assange

Brady will write the tax bill that Republicans say could be introduced as early as September. The legislation is on an ambitious timeline. The White House says it wants it done by Thanksgiving. Brady has a slightly more conservative timeline— he wants it done by the end of the year.

In the meantime, Republicans and their allies in the business community have tried to focus the party's message this month on their tax legislation. One of those allies, the American Action Network, is running millions of dollars worth of TV ads this month in congressional districts across the country to promote the tax bill.

"Thousands of jobs like mine are lost to places like China," says an American worker featured in one ad. "So when I see Congress working to cut taxes for working families and bring jobs back, I know how that matters."

But tax legislation is not dominating the conversation in the country, or even at GOP tax events.

Rep. Carlos Curbelo, R-Fla., attended the ranch event. He is a frequent critic of President Trump. Like most congressional Republicans, he is troubled by the president's muddled response in denouncing white supremacists at a rally in Charlottesville, Va., where a woman was killed when a car plowed into a crowd of counterprotesters.

"I view [Charlottesville] as a low point. Lowest point yet," Curbelo said, "and, hopefully, a turning point in some way."

Brady is more charitable. He has to work directly with the White House to get a tax bill done, but he concedes the effort isn't helped when his message is getting drowned out.

"I wish every segment and every discussion was about tax reform. I would love that conversation to dominate the news," Brady said, "I still think the president has the ability to refocus on tax reform. He's all in on it. He's natural about it. He gets the importance to jobs."

What congressional Republicans say they need to hyperfocus on now is making their case to the public. And no one can drive a message better than a president.

That means less ambiguity about white supremacists and moral equivalence, like Trump did this week when he laid blame on "both sides" in Charlottesville.

"What about the alt-left that came charging at the, as you say, alt-right? Do they have any semblance of guilt," Trump said in an unwieldy, impromptu press conference at Trump Tower on Tuesday.

Frustrated Republicans still believe Trump is their most powerful communicator, but there is no certainty that he will be able to drive a message on tax legislation. He wasn't able to on health care.

Republicans still largely believe that a tax bill should be easier to pass than their failed effort at health care, because tax cuts are a bedrock issue for the GOP.

Rep. David Schweikert, R-Ariz., says most Republicans are optimistic and excited about the chance to pass a tax bill this fall.

"If we can get this to the floor, it will be the single biggest, most important, powerful thing [Republicans] are ever going to vote on in their lives," Schweikert said. "And so tax reform, I believe, creates its own wind and its own shadow. So, yes, there's always going to be noise, but this is the biggest thing I'll ever vote on."

But first, Republicans need the president to get on message.