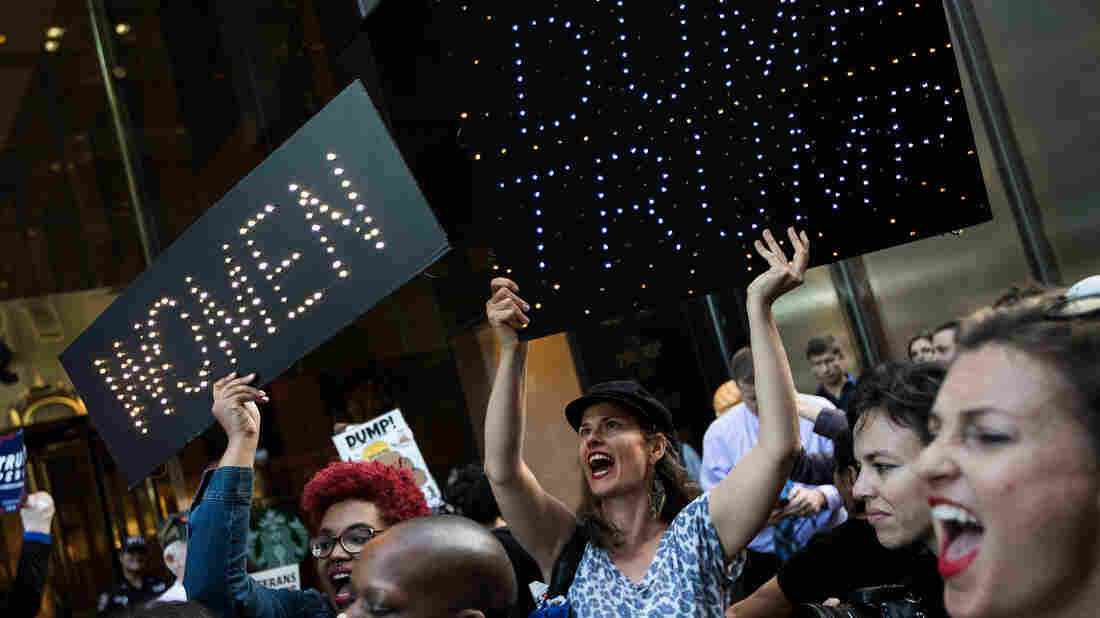 A group of protesters, made up mostly of women, rally against then-Republican presidential candidate Donald Trump outside of Trump Tower in New York City on Nov. 3, 2016. Drew Angerer/Getty Images hide caption 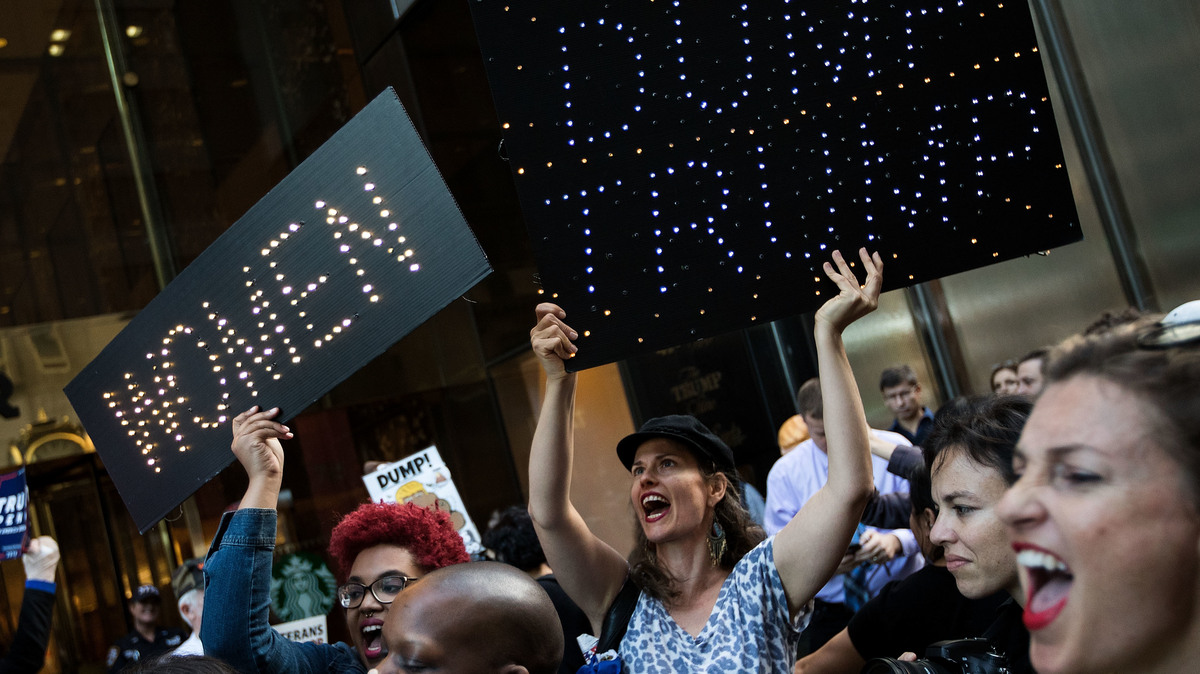 A group of protesters, made up mostly of women, rally against then-Republican presidential candidate Donald Trump outside of Trump Tower in New York City on Nov. 3, 2016.

Women are more enthusiastic than men about the idea of a Trump impeachment, according to the Public Religion Research Institute. Nearly half of women — 47 percent — believe President Trump should be impeached, compared with 32 percent of men.

Not only that, but women are a big reason why his approval rating is so low, Gallup data show. Women approve of Trump far less than they have approved of any other president at this point in his administration in at least the last 64 years, according to data collected since Dwight Eisenhower was in the White House. Men, meanwhile, are within the historical norm.

Impeachment is highly unlikely, but discussion of it has grown more mainstream with developments in the investigation into Russian interference in the U.S. election and whether there was any collusion with the Trump team. In particular, Trump's firing of FBI Director James Comey in May got lawmakers referring to the I-word as something that was within the realm of possibility. Trump and the White House have repeatedly denied any wrongdoing.

Women had protested Trump's presidency from the start. The 2016 election featured one of the widest gender gaps in recent history. The Gallup poll shows a continuation of this pattern for Trump, in which women and men have starkly different opinions of him.

Currently, women's approval of Trump is 14 points lower than men's approval. That is one of the biggest gender gaps ever seen among modern presidents in their first August in office.

Men's approval of Trump, meanwhile, is 43 percent, right around men's 41 percent approval of Clinton in 1993 — low, but not unprecedented.

Combine that data with this month's numbers from PRRI and one can see it's not just about gender; gender dynamics appear to be at work among Democrats far more than among Republicans.

Democratic men just aren't as likely as female Democrats to believe the president should be impeached. Independents likewise have a sizable gap. Republicans, however — not so much.

For both independents and Democrats, the gap is statistically meaningful, according to PRRI, but for Republicans, it is not.

There's no way to tell from a few survey numbers exactly what is going on here. But it does provide a glimpse into the intersection of the power of both party and gender. Among Republicans, there appears to be partisan loyalty to the president, for both women and men.

But among independents and Democrats, any number of reasons have pushed women to be more hostile to the president than men are.

Women nationwide have grown more pessimistic about the future of the nation in just two years, according to a Pew Research Center poll in April, but Democratic women in particular have felt that shift.

As of 2015, 43 percent of women said they had "quite a lot" of confidence in the nation's future. That share had fallen to 29 percent by 2017. But among Democratic women, the fall was steeper, from 48 percent to 20 percent. Democratic men's optimism fell off by half that much. Many things that Trump said or that came to light during the presidential campaign sparked outrage in women, particularly among women on the left. During his run, he mocked Republican primary challenger Carly Fiorina, saying "Look at that face!"; said he favored punishing women who got abortions (a stance that most abortion opponents oppose; he later backtracked); and seemed to reference then-Fox anchor Megyn Kelly's menstruation after her tough debate questions. On top of all that, the infamous Access Hollywood tape, in which the future president talked in crude terms about grabbing women by their genitals, was released late in the campaign.

(That is a partial listing, but the London Telegraph's Claire Cohen has cataloged Trump statements in which he has objectified, insulted or otherwise belittled women, stretching back to the 1980s.)

Those sorts of statements likely play some part in these new numbers, Cox said.

"It's been suggested that Trump's actions in criticizing women who have opposed him, often in very personal terms, is at least partly responsible for this disparity," Cox said, though he cautioned against pointing to one factor. "It's probably not the whole story."

Whatever the cause of this gender gap, Trump's election has certainly had an effect on women who oppose him. His election helped inspire the massive women's marches the day after his inauguration, and organizations that promote Democratic women, like EMILY's list, have reported a surge in interest from women saying they would like to run for office.