Accessibility links
Books Become A Bridge Out Of Grief In 'The Futilitarians' Anne Gisleson was reeling from a series of family tragedies when she began meeting with friends to discuss books and life in post-Katrina New Orleans. Her new book chronicles a year of those meetings. 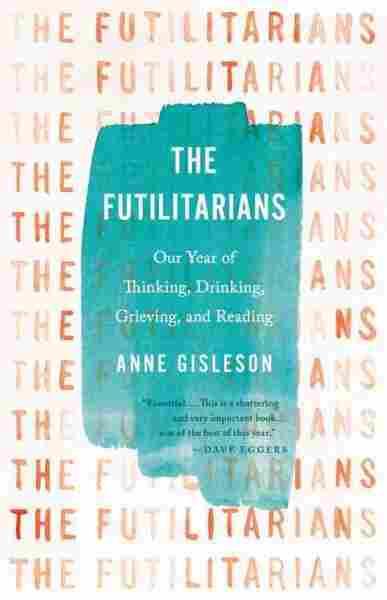 Our Year of Thinking, Drinking, Grieving, and Reading

On paper, few things may seem more navel-gazing than a memoir about being in a book club. But Anne Gisleson takes that ostensibly narrow premise and goes universal in her debut book, The Futilitarians. She writes about her time spent in a circle of friends who call themselves the Existential Crisis Reading Group — nicknamed The Futilitarians. Their portmanteau of "futility" and "utilitarian," while playful on the surface, isn't chosen lightly: They gather regularly to read and discuss books, as well as their lives, in post-Katrina New Orleans. And as their collective name suggests, they've learned to use the written word as a way to explore both the hopelessness and the constructiveness of their grief.

Well, it's mostly the written word. At one point, the movie Hot Tub Time Machine makes its way, hilariously, onto Gisleson and company's "reading" list — alongside books by James Joyce, Franz Kafka, Kingsley Amis and Clarice Lispector, among others. The group meets monthly; accordingly, The Futilitiarians comprises twelve chapters, each covering a meeting between January and December of 2012. It's a year of tumult. Gisleson, whose father is two years into his doomed battle with leukemia, is still reeling from the suicides of her twin sisters, 18 months apart. Her husband Brad is haunted by ghosts of his own. Together, and with Katrina continuing to echo throughout their city seven years after the fact, they've assembled a group of friends whose own troubled and occasionally triumphant lives could use some bookish reevaluation.

'The Futilitarians' tackles hopelessness, but it never succumbs to it. Gisleson writes with wit, warmth and a spiritual devotion to books that never comes across as preachy.

Hot Tub Time Machine aside, the group's growing bibliography becomes a gateway. Lubricated by cocktails and a go-for-broke desperation, they relate their reading choices to their own inner monologues — expressed at last — about who they are and why they're here. Chris is a jack-of-all-trades and master of none, whose libertine lifestyle makes Gisleson long for the freedom of her youth; it ties into one of the group's first assigned writers, Epicurus, and his ancient championship of pleasure. The mix of Gen-Xers and Millennials also includes Sara, a sage 20-something who plays the bass guitar and injects poetry into the mix — not just as a literary form, but as a way of life.

The group's explorations don't remain strictly literary. Gisleson brings New Orleans itself into sharp focus, lingering lovingly on its places, its people and its history. The tragedy of Katrina is more than a backdrop; at one point the group uses the half-renovated ruins of a furniture store as the site of a turning point in Gisleson's grieving of her father. He was a lawyer who volunteered to help death row inmates at the Louisiana State Penitentiary, and the more she learns of the legacy of his altruism — as well as his addiction and mental illness — the more it sheds light on her own quest for salvation. Mortality looms over the men and women who call themselves Futilitarians, but so do hangovers, wry humor and New Orleans' resilience and renewal in the face of devastation.

The Futilitarians tackles hopelessness, but it never succumbs to it. Gisleson writes with wit, warmth and a spiritual devotion to books that never comes across as preachy. In the final month of the group's meetings, she stumbles across a quote by Simone de Beauvoir that encapsulates her yearlong experience in Existential Crisis Reading Group: "It is the existence of other men that tears each man out of his immanence and enables him to fulfill the truth of his being, to complete himself through transcendence, through escape towards some objective, through enterprise." This search for purpose and connection amid chaos and loss permeates even the most heart-wrenching moments of The Futilitarians — and it's what turns the book from a meditation on reading to a celebration of being.