Accessibility links
Trump's Visit To Arizona Targets GOP Sen. Jeff Flake A recent presidential tweet called Flake "WEAK" and "toxic." Flake says Trump and his supporters "have given in to the politics of anger." 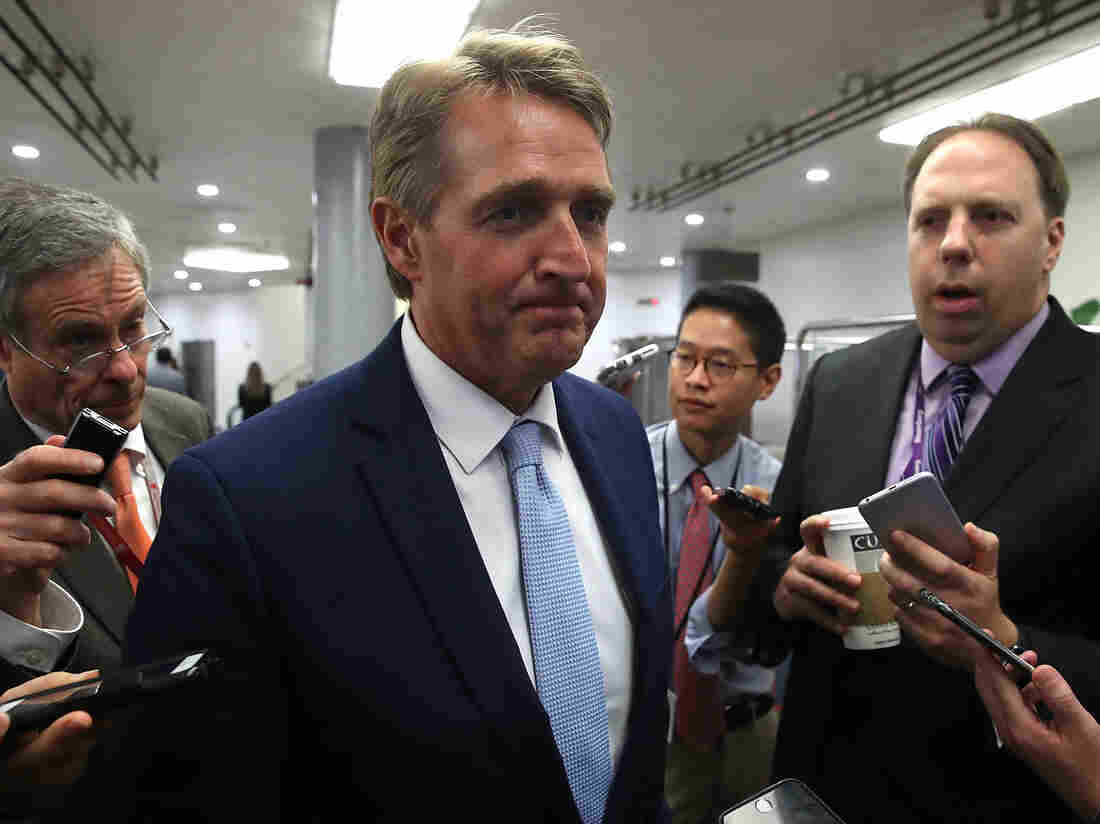 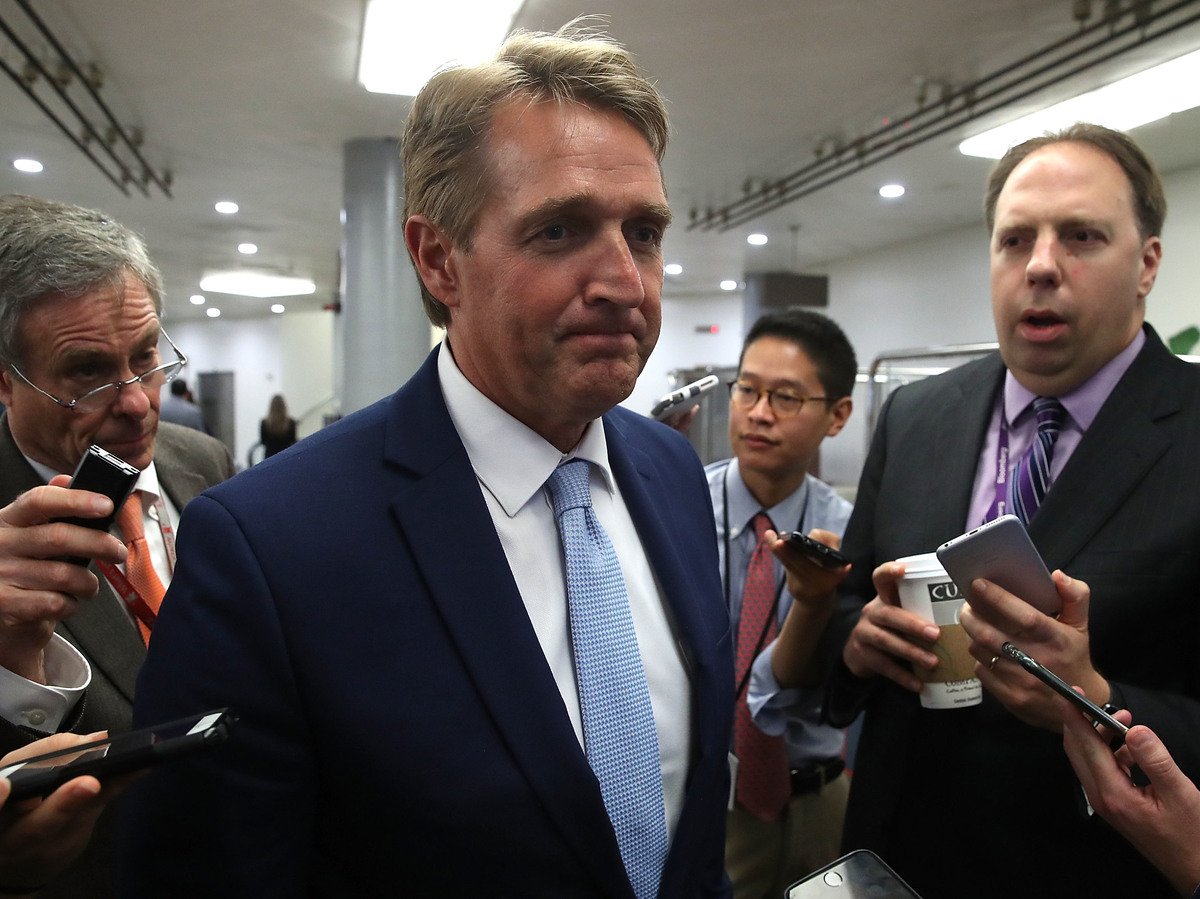 President Trump has had harsh words for Sen. Jeff Flake and recently praised Flake's primary challenger ahead of Trump's visit to Phoenix.

President Trump's visit to Arizona is already fraught with controversy. The mayor of Phoenix asked the president to hold off staging a campaign rally in his city following the recent violence in Charlottesville, Va. Then, there are the hints Trump has dropped that he might issue a controversial pardon for the former local Sheriff Joe Arpaio, who was recently convicted of criminal contempt of court for disobeying a federal judge.

Last but not least, Trump may step further into next year's Arizona Senate race by tormenting one of his most outspoken Republican critics, the state's junior U.S. senator, Jeff Flake, and potentially upsetting the delicate balance of power in the Senate.

At a recent meeting in Mesa, a conservative suburb east of Phoenix, more than 70 GOP grass-roots leaders gathered to discuss party business. Even though Flake has a home in Mesa and used to represent the area in the U.S. House, many of the Republican activists present expressed disgust for Flake, who is serving his first term in the Senate and is up for re-election in 2018.

"Jeff Flake is a 'Never Trumper'," said Gene Klund, a 75-year-old party activist. "He's not representing, in my opinion, the people of Arizona. He's representing his own self-interest."

Recent polls suggest Flake is one of the least popular senators in the country.

The Republican activists in Mesa griped about Flake's moderate stance on immigration and his long-running feud with Trump, whom he refused to vote for.

Although Flake has voted in favor of the Trump administration's priorities more than 90 percent of the time, according to an analysis by FiveThirtyEight, Trump loyalists still say Flake is trying to thwart the president's agenda. Flake recently released a book that is critical of his own party and the president, saying they've lost touch with conservative values and "have given into the politics of anger."

"I think we need to drain the swamp. And I think Flake has added to the swamp, and I'm sorry to say that," Bollwinkel said.

Bollwinkel said she used to support Flake but believes he erred by following the example of Arizona's senior senator, John McCain, another critic of Trump who is known for sometimes breaking with the Republican Party.

Both Arizona senators were part of the bipartisan "Gang of Eight" that brokered a comprehensive immigration overhaul bill in 2013 that included a pathway to citizenship for unauthorized immigrants living in the country. Although the bill passed the Senate, it was never approved by the House.

"I think that was a slap in the face," Bollwinkel said.

A foe in the White House

Flake's Senate seat is one of just two that Democrats think they stand any chance of taking in 2018 in what is otherwise expected to be a challenging election for Senate Democrats.

But Democrats may get a boost from Trump.

Robert Graham, a former chair of Arizona's Republican Party, told NPR's Scott Simon last month that Trump has promised to give $10 million to unseat Flake in his primary.

Last week, the president tweeted that Flake is "WEAK on borders, crime and a non-factor in Senate. He's toxic!"

In the same tweet, he said he was glad that Kelli Ward, Flake's first official primary challenger, is running against him.

"I did notice he spelled my name right," Ward said. "You know I gave a little cheer for that as well. Look forward to welcoming him to Arizona. And you know, I'm thrilled about it."

While many political operatives question whether Ward is a strong enough candidate to win a general election, she is strongly supportive of the president and is an immigration hard-liner.

"It's pretty obvious that Flake's book has only made things much much worse and even more personal for the president," said Constantin Querard, a conservative political consultant with the Arizona firm Grassroots Partners and a Flake critic.

Can a Republican senator run against Trump and get re-elected?

This Monday, Flake spent his morning at a breakfast with local chambers of commerce in the Phoenix suburbs, where he spoke about the importance of free trade and what he sees as broken in Washington.

"We have got to get away from this notion that it is a bad thing to sit down and work across the aisle," Flake told the audience of about 100 people in a meeting hall in Gilbert. "It is just disheartening to be in that situation of being attacked if you realize that you need a bipartisan solution for something."

Afterwards, when asked by reporters about the president's most recent tweets about him, Flake responded, "I don't worry about it at all. I'm going ahead and doing my job."

Flake insisted that he was running "my own campaign" and that as for Trump, "what the president's does, that's his prerogative."

Still, Trump easily won Arizona's presidential preference election last year. For Querard, Flake's decision to speak out and write a book critical of the president is a risky bet before the Republican primary, currently scheduled for August 2018.

"That has basically turned this Senate race into the question of: Can you basically run against Trump and get re-elected as a Republican?" Querard said.

But Flake's supporters argue he has little to fear from Trump's supporting a primary challenger against Flake.

"So I don't see that having too much of an impact," said Meghan Cox, a political consultant with Lincoln Strategy Group who says most Trump supporters in Arizona likely would not back Flake anyway.

With Trump's bumpy tenure in office and sinking approval ratings, it's hard to predict how influential Trump will be with voters a year from now and Cox argues Flake's criticism of the president could wind up working in his favor.

"I think a lot of people appreciate that he doesn't back down or go with whatever the way the wind is," Cox said.