Accessibility links
Trump Inherits The Afghanistan Albatross — And Commits For The Long Term The president went against what he called his own instincts by agreeing to an open-ended extension of America's longest war. 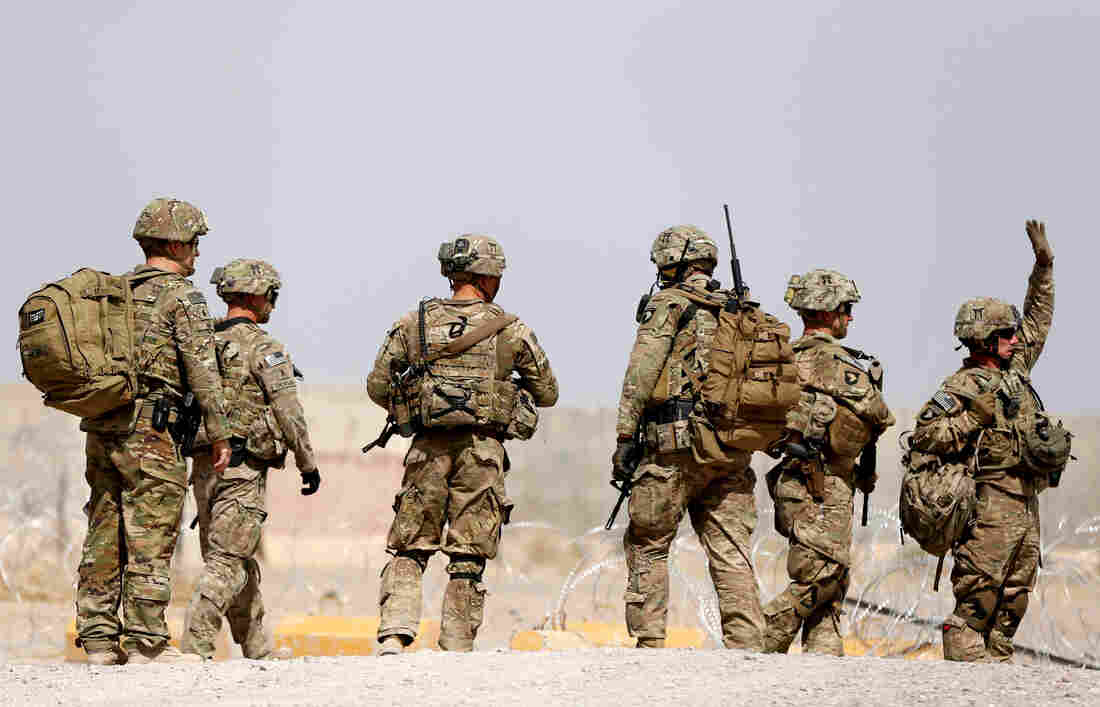 U.S. troops walk outside their base in Uruzgan province, Afghanistan, on July 7. President Trump has presented a new approach to the conflict there. Omar Sobhani/Reuters hide caption 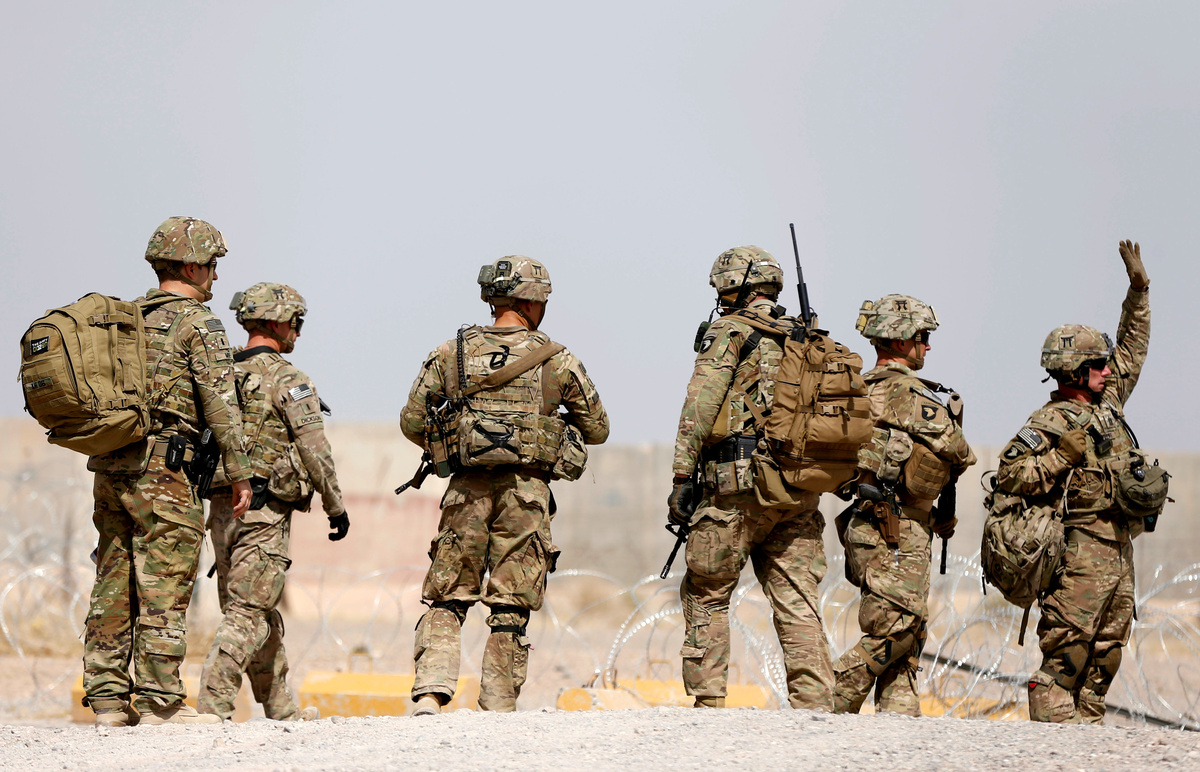 U.S. troops walk outside their base in Uruzgan province, Afghanistan, on July 7. President Trump has presented a new approach to the conflict there.

President Trump inherited it with the presidency and now is putting the albatross that is Afghanistan around his own neck.

According to senior U.S. officials, Trump will become the third consecutive commander in chief to authorize a major deployment of American troops. On Monday, he explained his reasoning following months of deliberation — which followed years of skepticism before he launched his political career.

"We have wasted an enormous amount of blood and treasure in Afghanistan," Trump wrote in 2013. "Their government has zero appreciation. Let's get out!"

Trump clung to that view through his election and inauguration as president, until the top commander in Afghanistan, Gen. John Nicholson, pushed the issue back into the foreground earlier this year by warning Congress that the conflict was in "stalemate" — and calling for a fresh infusion of personnel.

That set the stage for a Pentagon recommendation for more troops, one Trump has waited months to endorse — even making a point to invite enlisted service members to the White House to ask their opinions.

Ultimately, however, Trump said he concluded that deepening America's nearly 16-year commitment to Afghanistan was the right decision.

"My original instinct was to pull out, and historically, I like following my instincts," he said, "but all my life I've heard that decisions are much different when you sit behind the desk in the Oval Office."

A senior U.S. official said that Trump plans to deploy about 4,000 more American troops to Afghanistan, which would raise the force there to about 12,500 — numbers the president did not detail in his address. There are thousands more diplomats, aid workers, contractors and other Americans that continue to serve there.

Defense Secretary James Mattis told reporters traveling with him this week that he would reveal more about the specifics after Trump had made his announcement, but Mattis tried to stress how carefully the government had helped the president reach his decision.

"I'm very comfortable that the strategic process was sufficiently rigorous and did not go in with a preset condition in terms of what questions could be asked or what decisions would be made," Mattis said.

Trump and his political advisers were said to seriously consider simply cutting bait on Afghanistan — pulling out all or nearly all American troops there in recognition of the limits about what is possible for them to achieve.

Afghanistan's indigenous forces take heavy casualties as they lose ground against the insurgent Taliban that was once cleared out with American help. The government in Kabul cannot endure without significant U.S. and international support.

A collapse — like the one that followed the withdrawal of Russian support after the Soviet Union's disastrous invasion — might have posed new risks that terrorists could use ungoverned spaces within Afghanistan to plot attacks against the United States, as Osama bin Laden did in 2001.

'We Are Not Nation-Building Again,' Trump Says While Unveiling Afghanistan Strategy

U.S. counterterrorism officials say they've done so much damage to al-Qaida and other big extremist groups, as well as stepped up security in so many ways that the odds are slim of another attack on the scale of Sept. 11. All the same, no one can know for sure — which was one reason why Trump accepted the Pentagon's recommendation that he stay the course.

"The consequences of a rapid exit are both predictable and unacceptable," he said.

The president and his aides were keen to try to present his decision as new in the sense that it encapsulates the whole region — a "South Asian strategy," as opposed to a simple Afghanistan strategy. Secretary of State Rex Tillerson phoned his counterparts in Afghanistan, Pakistan and India on Monday to try to get them on board with a unified approach.

"The topic was how the United States would like to work with each country to stabilize South Asia through a new, integrated regional strategy," a spokeswoman said.

At the same time, administration officials say they want to turn the screws on Kabul and Islamabad, the capital of Pakistan.

Trump said he wants better progress from the Afghan government in making the best of American aid and more work by Pakistan in going after the safe havens inside its borders used by the Taliban leaders who run their insurgency in Afghanistan.

But in both threatening to cut off military aid payments to Pakistan and inviting its archenemy, India, to take a greater role in Afghanistan, Trump is embarking on a course that will require great diplomatic finesse to see results — at a time when the United States does not have an ambassador in Kabul or New Delhi and when many other top State Department posts are unfilled.

"Without an accompanying increase in diplomatic resources and foreign assistance, military success in Afghanistan will not be sustainable," warned Sen. Tammy Duckworth, D-Ill., an Iraq war veteran, in response to Monday night's speech.

The main factor that the administration hopes makes a difference is Trump's decision not to place an end date on the U.S. commitment. Critics faulted President Barack Obama for announcing a surge in U.S. troops and the date for their withdrawal in the same speech.

The Intense Images Of Afghanistan's Long And 'Distant War'

That signaled a finite timetable and let insurgents simply wait out the crest in the wave of deployments, as hawks complained. No more, Trump said.

"A core pillar of our new strategy is a shift from a time-based approach to one based on conditions," he said. "I've said ... many times how counterproductive it is for the United States to announce in advance the dates we intend to begin, or end, military options."

So as the 16th anniversary of the U.S. war in Afghanistan approaches in October, the latest change in Washington's approach will have been to drop a notional goal for when it might end.