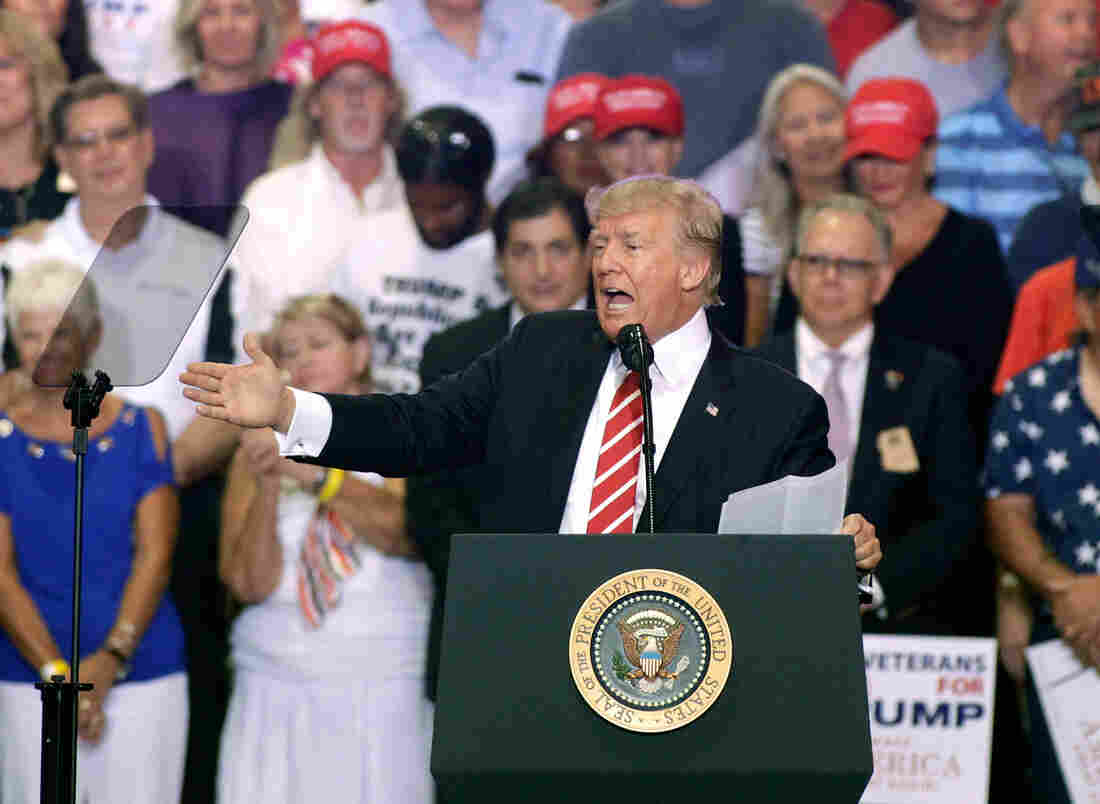 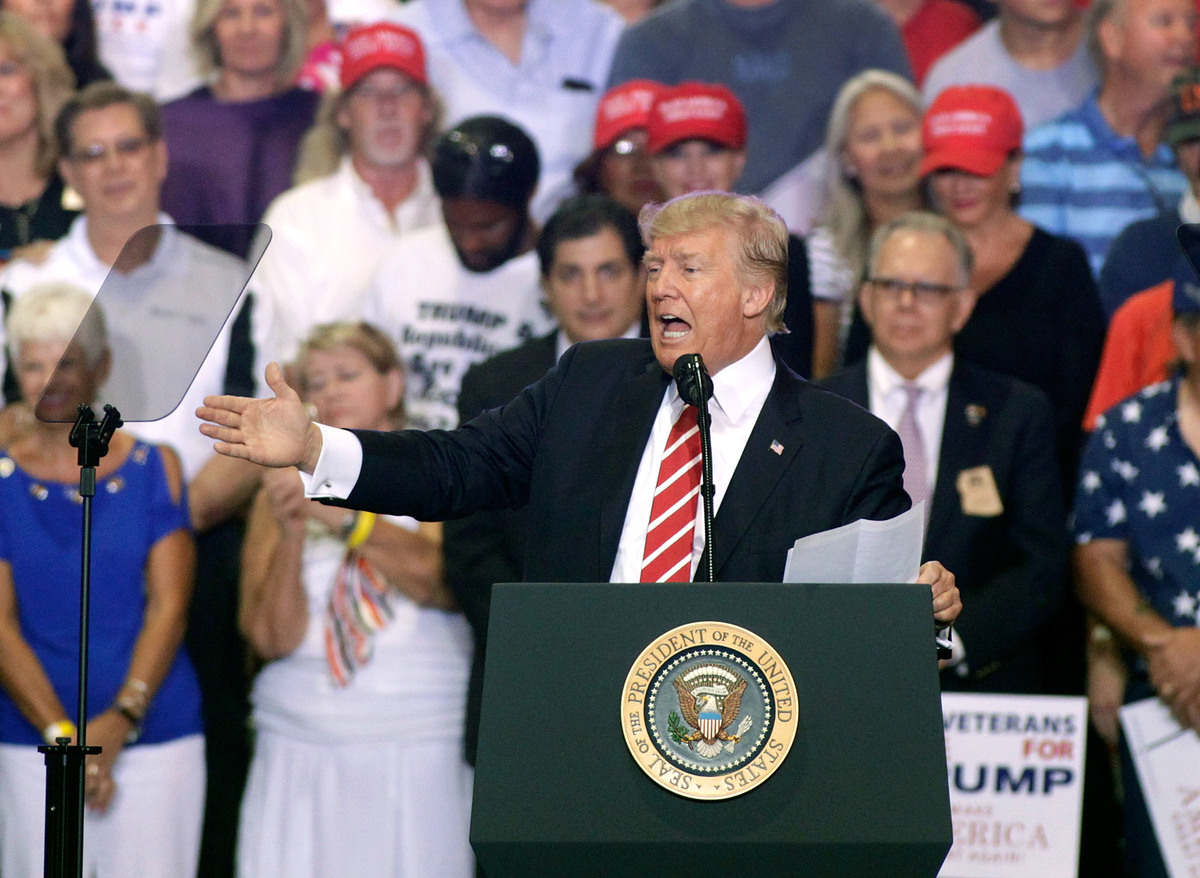 President Trump speaks to supporters Tuesday at a campaign rally in Phoenix.

President Trump launched into a lengthy defense of his comments on the violence in Charlottesville, Va., and again derided the news media at an impassioned campaign rally in Phoenix.

He reread a portion of his Saturday, Aug. 12, statement on the violence in Charlottesville, and mocked criticism that he didn't respond quickly enough.

However, in his reading, Trump left out a few words in his statement that had drawn the most criticism — his claim that there was hatred, bigotry and violence "on many sides." Many interpreted that as the president putting white nationalists and counterprotesters on equal footing. Trump read his Saturday statement as "we're closely following the terrible events unfolding in Charlottesville. We condemn in the strongest possible terms this egregious display of hatred, bigotry and violence."

The full statement, via PolitiFact, was:

"But we're closely following the terrible events unfolding in Charlottesville, Va.. We condemn in the strongest possible terms this egregious display of hatred, bigotry and violence on many sides, on many sides. It's been going on for a long time in our country."

Trump also berated the "dishonest" media at length, pointing out the press area as he often did on the campaign trail.

He reprised other campaign hits in the rally, with attendees chanting "build the wall" and "lock her up!" when he mentioned Hillary Clinton.

He also threatened a government shutdown over his plans for a wall on the Southern border. "If we have to close down the government," Trump said, "we're building that wall."

Trump strongly hinted he would issue a pardon to former Sheriff Joe Arpaio, who was convicted of a misdemeanor contempt of court charge for defying a court order. "I'll make a prediction: I think he's gonna to be just fine," Trump said, adding "but I wont do it tonight because I don't want to cause any controversy."

Earlier in the rally, Trump thanked his supporters in Phoenix, saying he would never forget "you were there at the start, you've been there every day since." He dismissed the protests outside the center, saying there "aren't too many people."

Trump also noted all the "Make America Great Again" hats in the room. "It is finally time to rebuild our country," he said, "to take care of our people." His remarks were peppered by the crowd chanting "USA, USA" and he reiterated his support for law enforcement and the military.

"We are all Americans, and we all believe, right now, in America first," he said.

Trump spoke for more than an hour and a quarter, touching on everything from NAFTA to clean coal to Senate procedures.

He spent several minutes recounting the Senate health care debate earlier this summer, in which Republicans came up one vote short of repealing the Affordable Care Act. "One vote away," Trump shouted repeatedly, "one vote away." He was referring to the one cast by Arizona's Republican Sen. John McCain, who dramatically voted against the repeal plan and is now undergoing treatment for brain cancer. He did not mention McCain by name. He also attacked the state's other GOP senator, Jeff Flake — though again not by name. He said he was "weak on the border" and "nobody knows who the hell he is." 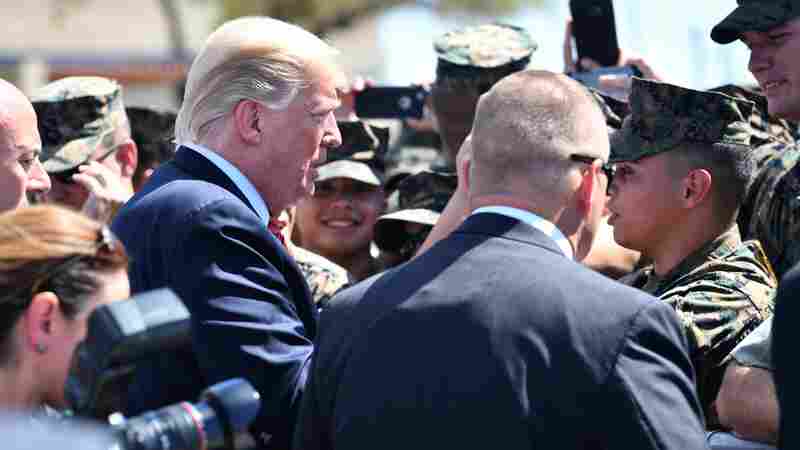 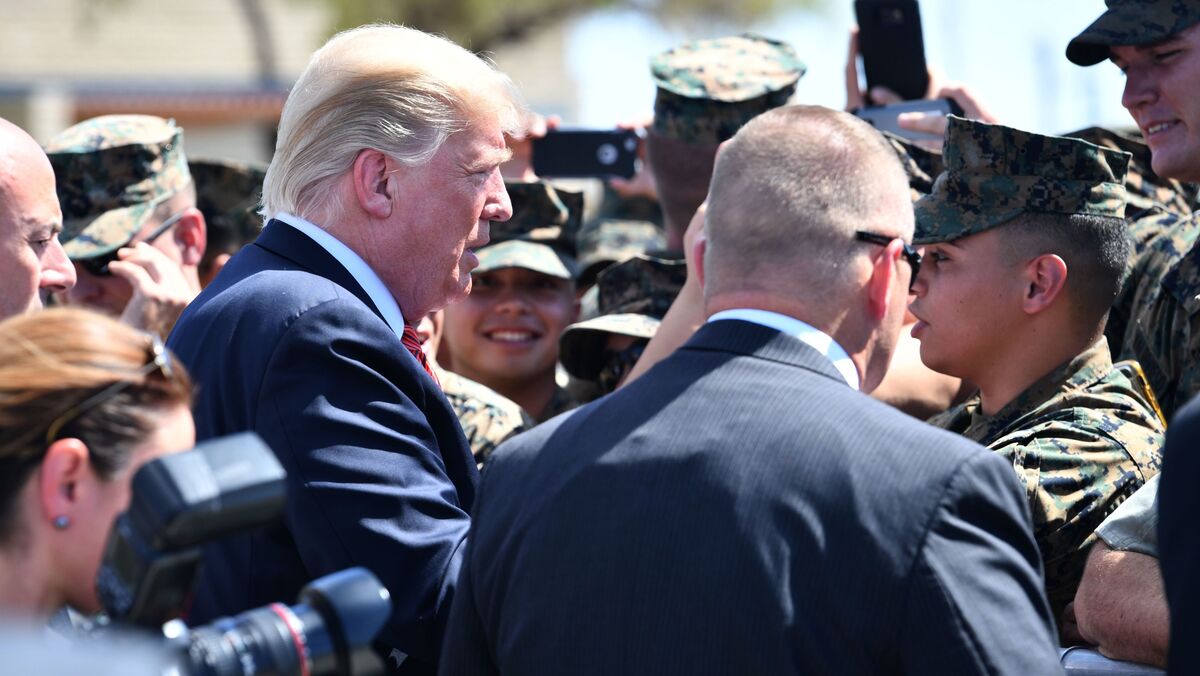 On NAFTA, Trump said, " I don't think we can make a deal," referring to efforts to renegotiate the accord between the U.S., Mexico and Canada, "so I think we'll probably end up terminating."

He called on Senate Republican leaders to end the filibuster rule, which requires 60 affirmative votes on most measures. With just 52 seats in Republican hands, Democrats have the ability to block most legislation, and Trump said Republicans are "wasting their time." But GOP leaders including Senate Majority Leader Mitch McConnell have shown little interest in changing the rule, knowing that someday they too will be in the minority.

Trump recounted a visit he had with Immigration and Customs Enforcement and the Border Patrol earlier the day in Yuma, Ariz. He saw a Predator drone and other equipment used by Customs and Border Protection to track and stop people from entering the country illegally.

Department of Homeland Security officials, in a call with reporters Tuesday morning, said Trump's stop in Yuma would allow him to highlight what can happen when a border wall (or, technically, a fence) is combined with additional enforcement resources.

Before 2006, there were only 5.2 miles of border fence in what's known as the Yuma sector. Now, there are 63 miles of fence, and illegal border crossings are down more than 80 percent, according to the Department of Homeland Security.

"So investments in the wall, as well as other border infrastructure, law enforcement personnel and technology, as well as increased prosecutions all resulted in a steep drop in illegal border crossings," said an official with the department who declined to be named. "What was once one of the least secure border areas in America is now one of the most secure areas because of those investments in border security."

Vice President Pence told Fox News in a live interview Tuesday morning that the president would use his campaign rally in Phoenix to lay out his agenda for the weeks ahead as Congress prepares to return to Washington. "We want to build a wall and have internal enforcement and border security," Pence said.

"Illegal immigration at our Southern border is down now more than 60 percent. And that's the result of the leadership that President Trump has been providing. But we need Congress to continue to support those efforts," Pence added.

There has been some discussion of demanding that funding for the wall be part of the government funding bills that must pass by the end of September. Others have talked about making it part of a deal to raise the debt ceiling, which also has a looming deadline. But it's not clear this is as high a priority for Republicans in Congress as it is for the president.

As Pence points out, illegal border crossings are down significantly under Trump. According to Department of Homeland Security statistics, from Jan. 1 to July 31, 2017, the Border Patrol apprehended 126,472 individuals attempting to illegally enter the U.S. at the border. That's a 46 percent decrease from the same period in 2016, which means fewer people are trying to enter the country now.

Trump is returning to the wall, one of the greatest hits of his campaign and something that had supporters chanting "build the wall" with zeal, just as he is taking hits from the far right for his decision to fire adviser Steve Bannon and to keep American forces in Afghanistan, apparently indefinitely. Trump is also still under fire from both the left and from elected officials in his own party for his remarks about the recent violence in Charlottesville, Va., which led to the death of a 32-year-old woman.

And after two weeks of a "working vacation" that included escalating tensions with North Korea, Venezuela and Republican senators, Trump was back in familiar territory with Tuesday night's "Make America Great Again" rally in Phoenix.