Accessibility links
Louise Linton, Treasury Secretary's Wife, Apologizes After Sparking Internet Furor With Online Post Dressed in more than $16,000 worth of clothes and accessories in the photo, Louise Linton, a Scottish actress married to Steven Mnuchin, had ridiculed an Instagram follower for being "out of touch." 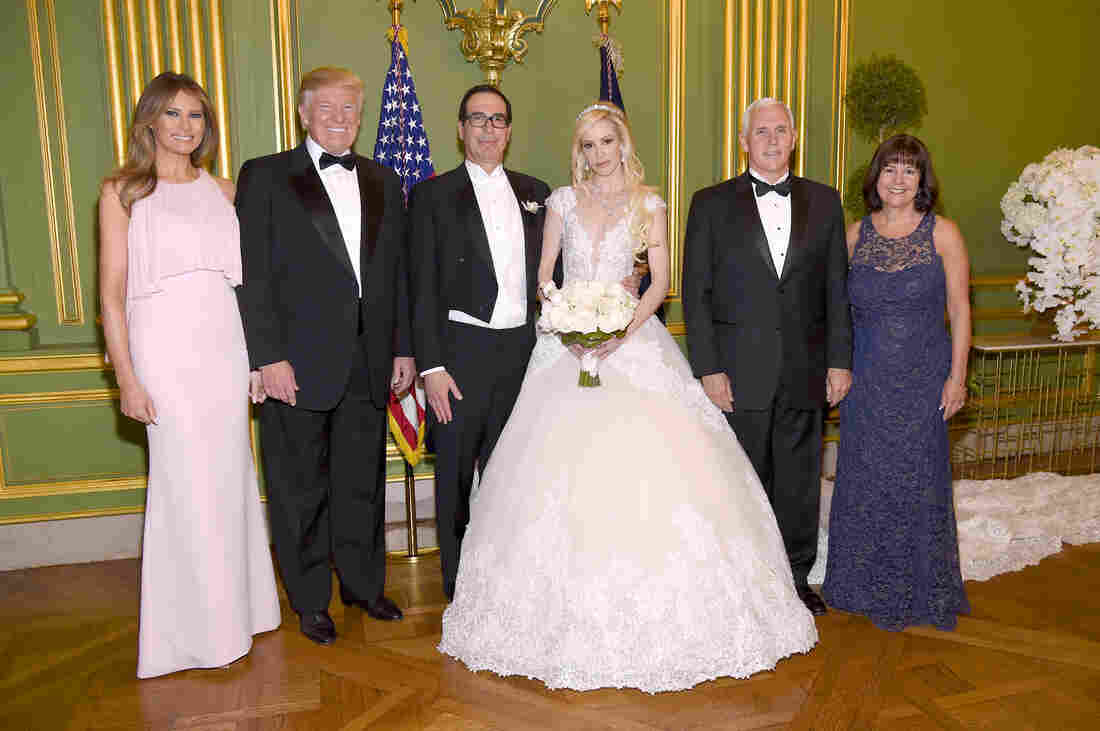 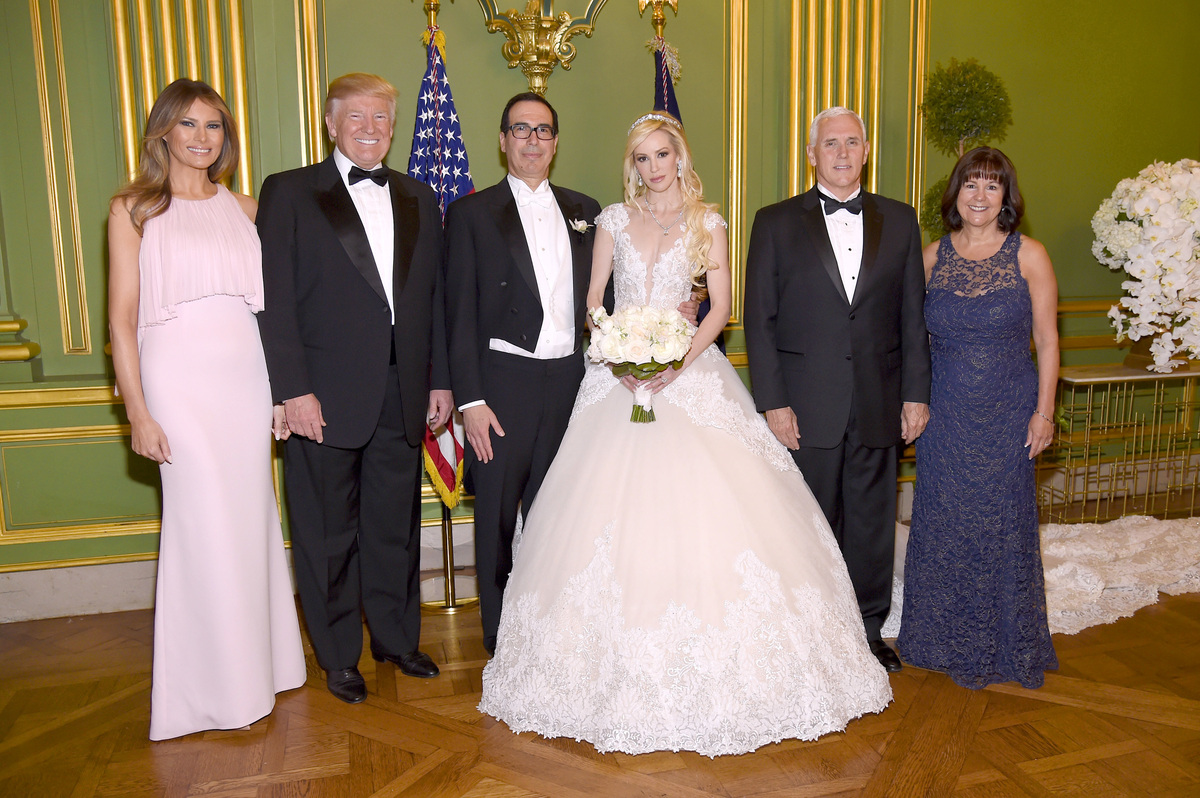 The vicious shade-throwing by the Treasury secretary's wife, Louise Linton, Monday was intended to put an Instagram commenter on blast, but it almost immediately blew up in the Scottish-born actress' perfectly made-up face.

Now, nearly a full day later, the 36-year-old has apologized through a spokesperson.

"I apologize for my post on social media yesterday as well as my response. It was inappropriate and highly insensitive," Linton said in a statement from her publicist, according to a report from CNN.

Louise Linton Said She 'Sacrifices' More Than Other Taxpayers. It's Not That Simple.

In case you're unaware, here's what happened: Linton, who apparently frequently travels with her husband, Steven Mnuchin, posted an image of herself as she glamorously walked off a U.S. government jet in Kentucky.

The photo is not unlike those often posted to the same social media platform by first daughter Ivanka Trump and first lady Melania Trump. However, in Linton's case, she also tagged a number of high-end designer items she was wearing. Here's part of what she listed:

The unusual label-laden post prompted Jenni Miller, a mother of three from Portland, Ore., who had wrongly assumed that taxpayers were footing the bill for Linton's trip, to write, "Glad we could pay for your little getaway. #deplorable."

That set off Linton who responded with a screed of personal attacks against Miller and her family:

"Aw!!! Did you think this was a personal trip?! Adorable! Do you think the US govt paid for our honeymoon or personal travel?! Lololol. Have you given more to the economy than me and my husband? Either as an individual earner in taxes OR in self sacrifice to your country? I'm pretty sure we paid more taxes toward our day 'trip' than you did. Pretty sure the amount we sacrifice per year is a lot more than you'd be willing to sacrifice if the choice was yours. You're adorably out of touch. Thanks for the passive aggressive nasty comment. Your kids look very cute. Your life looks cute. I know you're mad but deep down you're really nice and so am I. Sending me passive aggressive Instagram comments isn't going to make life feel better. Maybe a nice message, one filled with wisdom and hunanity [sic] would get more traction. Have a pleasant evening Go chill out and watch the new game of thrones. It's fab!"

Since the outburst, Linton has made her Instagram profile private and she's reportedly deleted the photo. She has also received a lot of attention in the past day for being, well, out of touch.

It has been perceived to be in especially bad taste in light of the purpose for the trip. Mnuchin, a former Goldman Sachs executive and film producer, was in Louisville, Ky., to discuss the nation's debt ceiling and a broad tax overhaul — which the White House contends will alleviate economic strain on middle class aka "cute" families — with Senate Majority Leader Mitch McConnell.

Without getting into the dollar amount that any single person pays toward federal taxes, or how much of their income that may represent, it is valuable to establish some kind of context for the value of the items Linton boasted about.

And, here are a few additional takeaways from the now-deleted photo.

A Treasury Department official assured the Washington Post that the Mnuchin-Linton household personally covers the extra cost of travel for the Treasury secretary's wife, though they did not disclose what that added up to on this particular trip. Additionally, the official stated that Linton was not compensated by any of the labels she tagged in the photo.

While the public may not be privy to the exact price tag for Linton to tag along with her husband, it is possible to approximate what it costs to deplane a government-owned jet outfitted in the expensive labels Linton felt compelled to identify and one she managed to leave out.

Based on what can be deduced here's our best guesstimate:

*Hermes Birkin Bag - $13,500.00 (*Though Linton did not tag the bag, it is easily recognizable as one of the world's most sought after status symbols.)

(**It is unclear where Linton purchased these items, but for the sake of an apples to apples comparison, let's assume she paid Kentucky state taxes.)

That is a hefty price tag for a trip outfit for most anyone at any income level but when put into the context of what it may signify for a Kentuckian earning minimum wage — $7.25 per hour — it is staggering.

A person would have to work 2,251 hours and 24 minutes to make enough to pay for such an ensemble. Put another way, a person would have to work for 56 weeks straight, without any deductions for state or federal taxes, in order to come up with the money. Not to belabor the point, but put yet another way, that is an entire calendar year plus one month with zero money going toward any other expenses – food, clothing, rent, electricity, underwear, etc.

While it may seem unusual for Linton to travel with her husband on official government business, it is not unique. Obama Defense Secretary Ashton Carter and his wife, Stephanie, often traveled together. So much so, that she was pilloried for venturing off on shopping excursions in foreign cities while her husband attended to his duties.

In general, the cost of travel by elected officials and their families to taxpayers, including presidential travel, is a touchy subject. In fact, reports Monday revealed President Trump's almost-weekly trips to Trump Organization properties have put tremendous pressure on the Secret Service budget. In the first seven months of the new administration, hundreds of Secret Service agents have worked so many hours, they will soon hit their maximum pay provided by statute and not be eligible for more overtime.

The Obamas were also lambasted for their regular date nights in New York City.

In the case of the Mnuchins, the only thing that does appear out of the ordinary is that the couple was traveling on a government jet in the first place. The Washington Post reports, "Treasury secretaries only fly government planes when they go on international trips. They usually fly on domestic carriers when they are traveling inside the country."

Linton is no stranger to Internet controversy. A self-published memoir about her volunteer stint in Africa was widely denounced as a work of fiction on Twitter.

#LintonLies: How Zambians Are Using Social Media To Talk Back

The book, entitled In Congo's Shadow: One Girl's Perilous Journey to the Heart of Africa, recounts the six months in 1999 when Linton, a white foreigner with "long angel hair" lived in Zambia allegedly hiding from rebel soldiers, during which she "witnessed random acts of violence, contracted malaria and had close encounters with lions, elephants, crocodiles and snakes."

Almost as soon as it was published the book was panned by Zambian scholars and officials who lived in the area at the time Linton wrote about. Linton was blamed for perpetuating outdated clichés about Africa while casting herself as a heroic "white savior." It also inspired the hashtag "#LintonLies."

(4) I'm not Marie Antoinette, I just play her on TV

Finally, Linton's self-aggrandizing, "Let them eat cake" tone made it easy for Instagram commenters to make Marie Antoinette references. Indeed, Miller, whose post sparked the Internet kerfuffle in the first place, told the New York Times, "If she hadn't made her account private, I would have written back with a very snide Marie Antoinette joke."

Well, it turns out Linton once played the last queen of France — who was eventually beheaded in the French Revolution – on CSI New York. Or at least, she played an actress playing her.