Accessibility links
Forebears: Sister Rosetta Tharpe, The Godmother Of Rock 'N' Roll A musician who broke every norm, Tharpe turned rock 'n' roll from a burgeoning musical style into an international sensation. She was — and is — an unmatched artist. 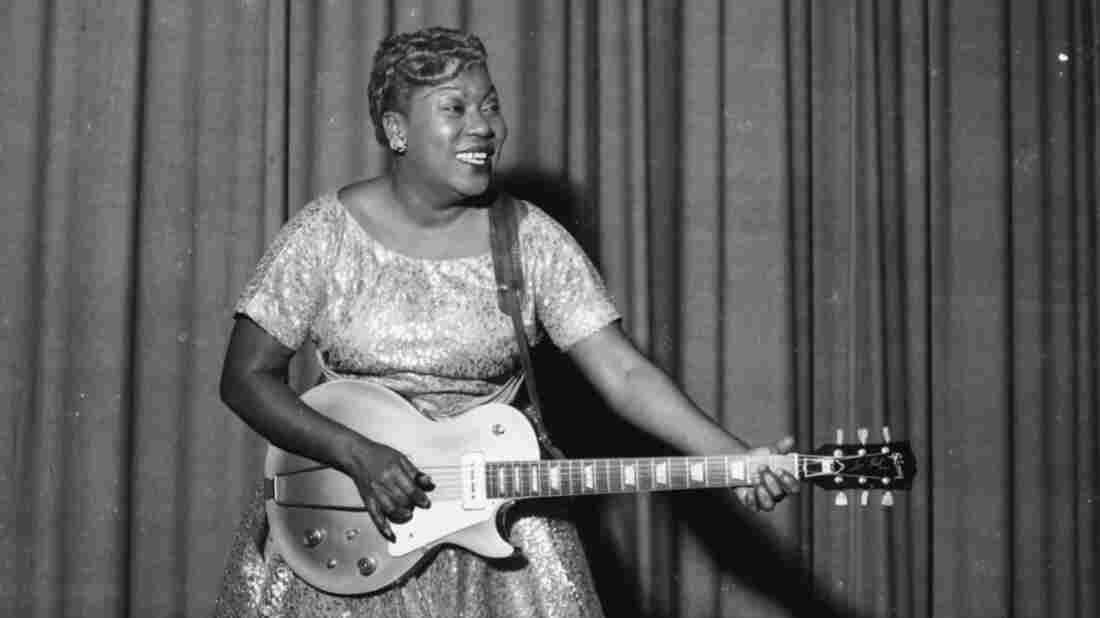 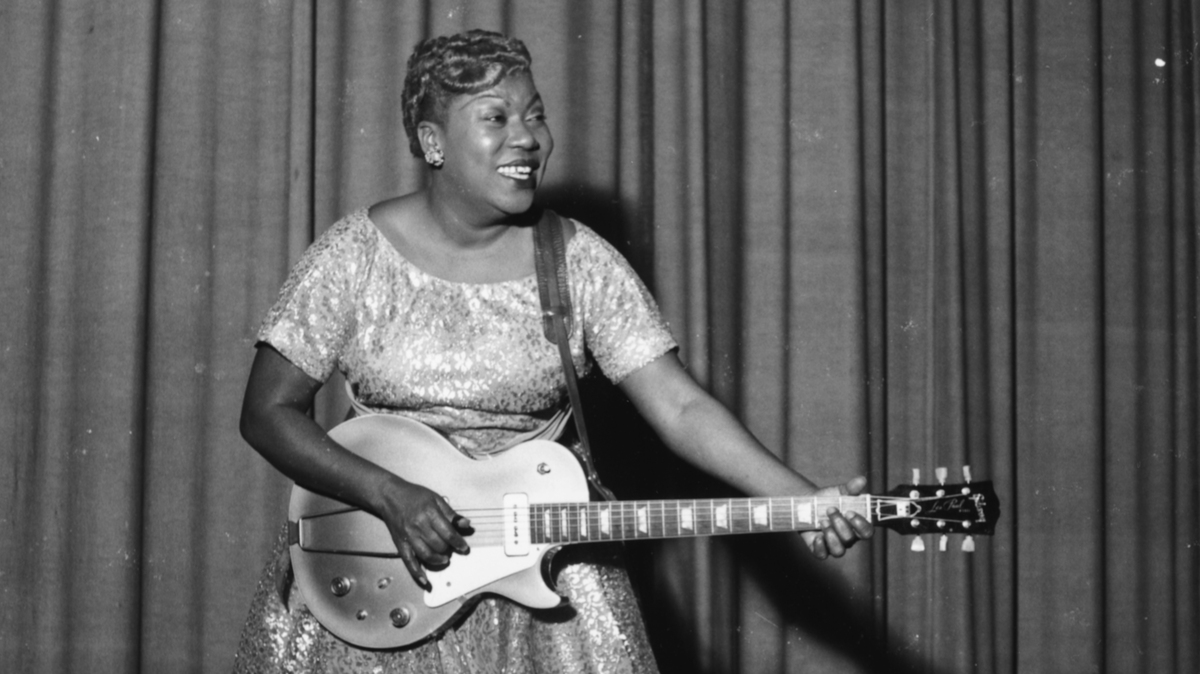 Sister Rosetta Tharpe was a fearless black artist in love with crafting a new sound.

Rock 'n' roll was bred between the church and the nightclubs in the soul of a queer black woman in the 1940s named Sister Rosetta Tharpe. She was there before Elvis, Little Richard and Johnny Cash swiveled their hips and strummed their guitars. It was Tharpe, the godmother of rock 'n' roll, who turned this burgeoning musical style into an international sensation.

Perhaps it's no surprise that Tharpe was always surrounded by music growing up. Born Rosetta Nubin in Arkansas to Willis Atkins and Katie Bell, Tharpe came from a family of religious singers, cotton pickers and traditional evangelists. She picked up the guitar at four years old, and at the age of six she accompanied her mother to perform with a travelling evangelist troupe in churches around the South. By the mid-1920s, Tharpe and her mother settled in Chicago, where they continued performing spiritual music. As Tharpe grew up, she began fusing Delta blues, New Orleans jazz and gospel music into what would become her signature style.

Although Tharpe's distinctive voice and unconventional style attracted fans, it was still the mid-1930s. Female guitarists were rare, and even more so was a musician who pursued both religious and secular themes, a fact that alarmed the gospel community. But Tharpe — young and innovative — was determined to keep experimenting with her sound. Her persistence and grit paid off, and by 1938, she had joined the Cotton Club Revue, a New York City club that became especially notable during the Prohibition era. She was only 23 at the time, a feat that was only amplified when she scored her first single, "Rock Me," a gospel and rock 'n' roll fusion, along with three other gospel songs: "My Man and I," "That's All" and "Lonesome Road."

Tharpe's lyrics unabashedly flirted with her openness of love and sexuality, an approach that left her gospel audience speechless. "Rock Me," which showcased Tharpe's distinctive guitar style and melodic blues mixed with traditional gospel music, made her a trailblazer — as did the range of her voice, which resounded with conviction as she sang the words "rock me!" With this song, she made it plain that her words could not only transcend lines of faith, but could also represent a shift in popular music in real time.

As a young black woman working within a heavily male-dominated industry in the 1940s, Tharpe wasn't shy about rattling conventions. She collaborated with heavy-hitting artists of the time, like Duke Ellington and the Dixie Hummingbirds. In 1941, she began travelling widely with the Lucky Millinder Orchestra, a notable swing band, and recorded the likes of "I Want a Tall Skinny Papa" with them. She even teamed up with the Jordanaires, an all-white male group, and began performing for mixed audiences. Despite her fame, institutional racism in the mid-1940s was still rampant. On tour, all restaurants and hotels were still segregated, so Tharpe slept on buses. She went around the back end of restaurants to pick up food because they wouldn't let her in.

Yet the spirit in her music never broke. She soon gained a celebrity status and even became a legend amongst black soldiers fighting in World War II. After the war, Tharpe started working with Sammy Price and produced a famous spiritual single, "Strange Things Happening Everyday," with Decca Records. As Gayle Wald's biography Shout, Sister, Shout!: The Untold Story of Rock-and-Roll Trailblazer Sister Rosetta Tharpe puts it, the song specifically references what was happening in the mid-1940s: WWII was ending; the atomic bomb was dropped in Hiroshima; Jackie Robinson had just been signed to the major leagues. The expression "strange things" helped to express the uneasiness of the bewildering events going on in the world, and Tharpe translated that seamlessly through her music. "Strange Things Happening Everyday" would become one of her most well-known records, as well as the first gospel song to cross over into the R&B top 10 charts. Some even argue that it was one of the first rock 'n'roll recordings.

By the time she was thirty, Sister Rosetta Tharpe had survived two marriages (including one to a preacher she married at age 19) and various relationships with both women and men. Although she was open about her sexuality within the industry, she kept this secret from the public. Tharpe eventually met her partner, Marie Knight, when they teamed up with their hit "Up Above My Head." The duo began touring by themselves (along with their band) and started taking control of their own business decisions. They toured, collaborated and performed as two queer black women in a relationship in the late 1940s; it was a radical act.

In 1950, the duo and partnership split. One year later, Sister Rosetta Tharpe married Russell Morrison, her manager. The wedding took place in a baseball stadium in Washington D.C., where over 20,000 paying customers attended, and a concert was recorded and later released as an album. Shortly after, Tharpe's career began dwindling down in the U.S. It was then that young white men started taking over the rock 'n' roll scene and experimenting further with the sounds she had forged.

Tharpe then took her talents to Europe and began touring again in 1957. While building a new generation of fans, Tharpe delivered what would become one of her most iconic performances, in 1964: Singing to a crowd across a train station platform in south Manchester. As she stepped down a horse-drawn carriage, with a gospel and blues rhythm playing in the background, she bobbed to the platform with a young gentleman on her arm. She kicked off the performance with a gospel tune, "Didn't It Rain." As Tharpe played on that showery day, she held her guitar close and squinted her eyes; it was obvious that the tale of love and heartache in her song was an experience she had survived herself. She continued touring in Europe practically until the end of her life (her last known recording is from 1970 in Copenhagen). She died three years later, in Philadelphia, from a stroke.

While Tharpe has historically been overlooked in rock 'n' roll history, she has, in recent years, been rightfully celebrated as a woman who broke every norm, and has a central place in the Turning the Tables canon. She was a gospel singer at heart who became a celebrity by forging a new path musically, a queer woman who toured with her partner and a fearless black artist who was in love with crafting a new sound. Through her unforgettable voice and gospel swing crossover style, Tharpe influenced a generation of musicians including Aretha Franklin, Chuck Berry and countless others. Her career, which spanned four decades, was grounded in both her confidence and the characteristic rawness she brought to her performances night after night. She was, and is, an unmatched artist.