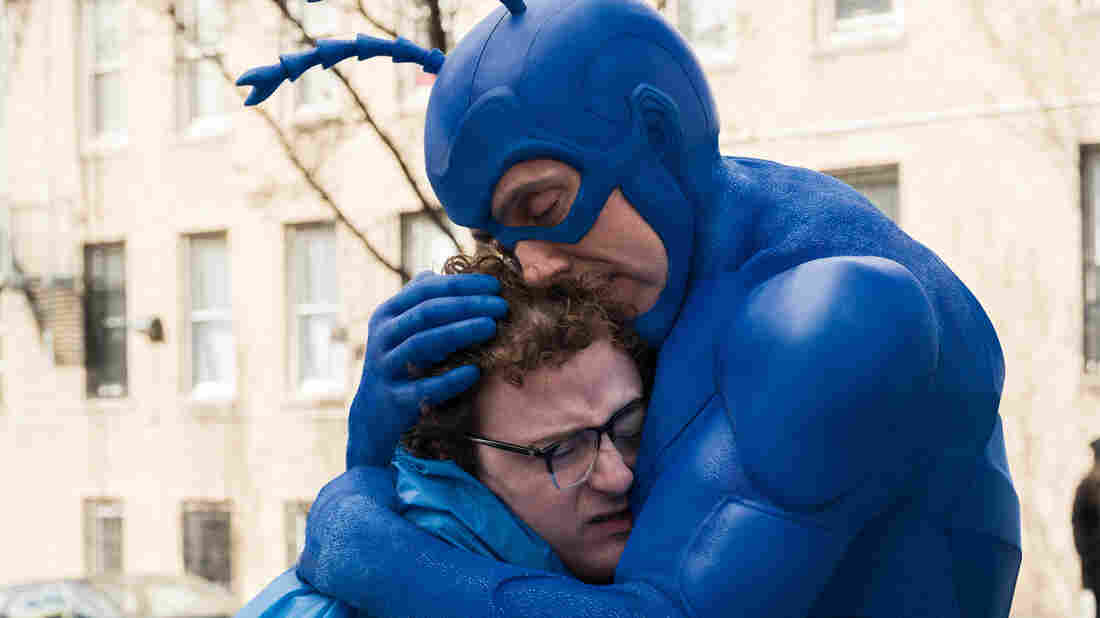 When The Tick (Peter Serafinowicz) attaches himself to Arthur (Griffin Newman), no tweezers in the world can separate them. Jessica Miglio/Amazon hide caption 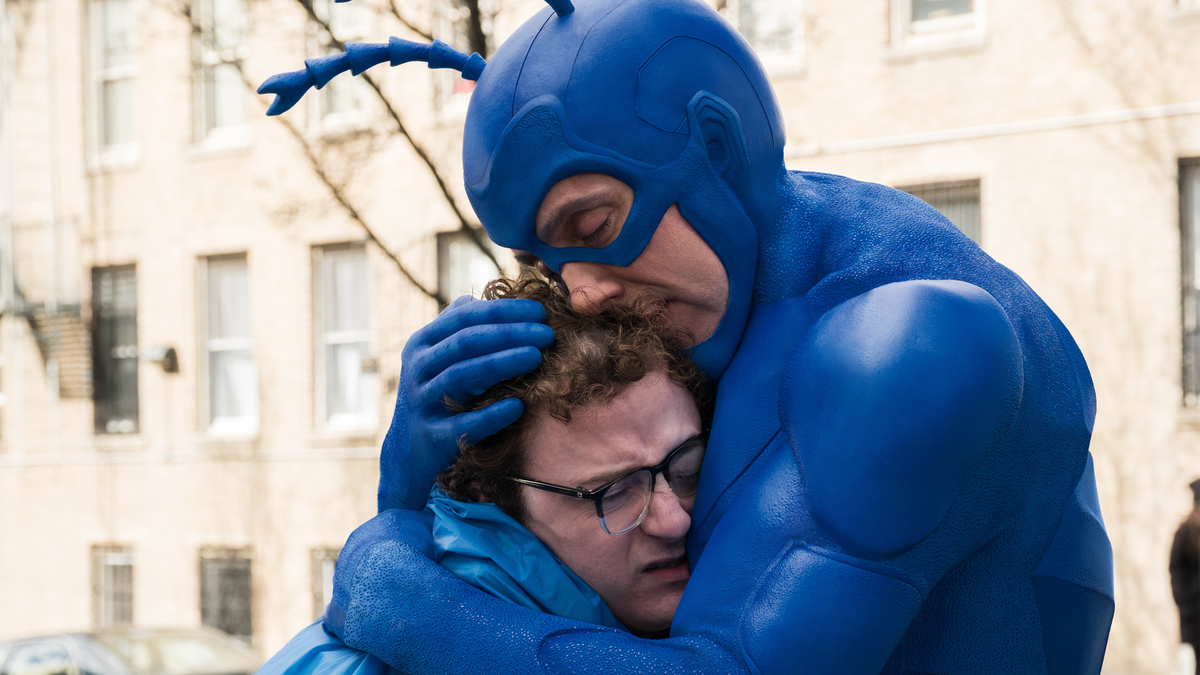 When The Tick (Peter Serafinowicz) attaches himself to Arthur (Griffin Newman), no tweezers in the world can separate them.

Say this much for The Tick: He comes with some serious, baked-in nerd-cred. Writer Ben Edlund created him back in 1986 to be the mascot of a Massachusetts comic book store.

Since then, his bumbling exploits have been chronicled in comic books, video games, a Saturday morning cartoon, and, back in 2001, a short-lived, little-seen but much-beloved live-action series starring Patrick Warburton. (On which actor Nestor Carbonell wore the holy hell out of some leopard-print tights as the Latino hero Bat-Manuel.)

The gone-too-soon 2001 live-action version of The Tick gave the world Nestor Carbonell's Bat-Manuel, and we are forever grateful.

Here's what you need to know, going into the new series coming to Amazon on Friday: The Tick (Peter Serafinowicz) is a superhero in a city called ... The City. He's a mountain of muscle in a bright blue costume topped by two very expressive antennae, which bend and curl like the ears of a Doberman.

(Yes, I know: Ticks aren't blue, and they don't have antennae. Look, you're you're just gonna have to let some stuff go.)

As for his superpowers — he does a nice job of summing them up to his would-be sidekick in the first episode:

"I'm a superhero, Arthur! I'm nigh-invulnerable, I have the reflexes of an Olympic-level jungle cat, I have the strength of ten, perhaps 20, men — a crowded bus-stop ... of men. But my greatest power is this: When Destiny speaks ... she speaks to me.

The thinking gets done by that nebbishy sidekick, Arthur, an anxiety-ridden accountant in a moth costume played in the new series by Griffin Newman.

Through all of his previous iteration, The Tick has really always been Arthur's story, told from his perspective. The Amazon series doubles down on that concept by supplying Arthur with ... wait for it ... a tragic backstory.

It involves a dead father, and an elderly supervillain, played here with wheezy gusto by Jackie Earle Haley.

That weirdly somber bit of business is just one of many ways that this latest outing seeks to ground the action in a emotional universe that's darker than fans of this historically light and breezy spoof of character might expect.

Consider: This Arthur is a guy who's living with mental illness, and the series raises the question of whether the Tick truly exists, or is instead a manifestation of Arthur's id, albeit a weirdly steroidal one.

It raises that question, and answers it soon enough, and I won't spoil it here, but it's not played strictly for laughs ... which is surprising, and a bit puzzling. Superheroes are always getting grim and gritty reboots, and this isn't that, exactly. But it is less broad, less silly than previous versions.

All that hand-wringing over Arthur's mental condition threatens to gum up the series' momentum, especially in the first two episodes, and leach out some of the goofy charm that's essential to the enterprise. The attempt to deepen the emotional stakes — to give the show heart, as they say — is laudable, I suppose. But this is a character who long ago decided that his heroic battle-cry should be — famously, fabulously — "Spooooon!"

The Tick (voiced by Townsend Coleman) and Arthur (Micky Dolenz YES THAT MICKY DOLENZ) pick their battle-cries in the 1994 animated series.

At least in the first six episodes made available to press, said utensil-based-catchphrase doesn't turn up — and given the less anarchic tone, likely wouldn't fit in, anyway. More's the pity.

Once the show gets past all that "Is the Tick just a cobalt-blue Tyler Durden?" business, however, the show finds its rhythm, and allows its supporting characters room to breathe. Yara Martinez's evil mistress of static cling, Miss Lint, gets some laughs out of her living situation (her man-bunned ex refuses to move out of her lair), and Scott Speiser's ludicrously violent vigilante — the excellently named Overkill — gets some nice moments playing off the fussy consternation of his sentient boat (the great Alan Tudyk, adding yet another A.I. voice to his IMDB profile). You'll likely wish Broadway mainstay Michael Cerveris had been given a bit more to do, as Egyptian-themed (and brand-obsessed) ganglord Ramses IV.

It takes Serafinowicz and Newman a couple episodes to settle into the necessary chemistry between The Tick and Arthur, but they do find it. Which is really what matters, because for the show to work, we have to see how much these two hapless, broken, horribly overmatched heroes need each other ... and that there's nothing either one of them can do about it. They are fated to be together, because, as The Tick himself so eloquently monologues:

Destiny's got her hands way, waaaaaay up in [our] puppets! It's an unpleasant tingling! THE DEEPEST OF WRIGGLES!

The first six episodes of The Tick's 12 episode-season will be available to stream on Amazon Friday, August 25. The second six will be released in early 2018.

An earlier version of this post mistakenly stated that all 10 episodes of the series will be available on Aug. 25.