Accessibility links
In 'The Villainness,' Revenge Is A Dish Served Stylishly This baroque Korean revenge thriller borrows heavily from similarly themed films, but features great performances and employs a purely visual story-logic that sets it apart.

In 'The Villainness,' Revenge Is A Dish Served Stylishly

In 'The Villainness,' Revenge Is A Dish Served Stylishly 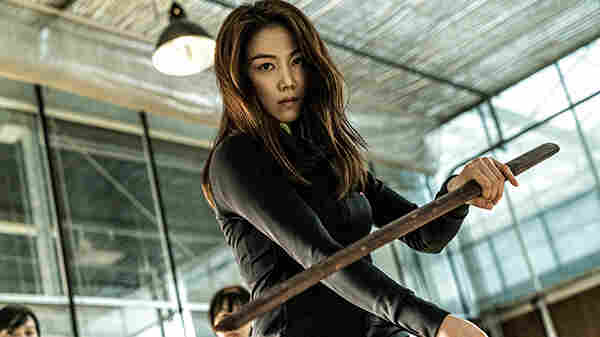 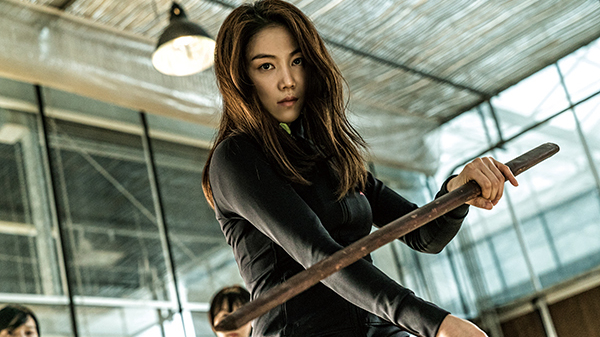 In the exhilarating introduction to The Villainess, you are there. But who are you?

Shot from the perspective of the attacker, the sequence tracks a lone fighter through a building full of thugs, all of whom get dispatched with bloody efficiency. Finally, the unseen figure enters a martial-arts studio with a dozen or so adversaries and a mirrored wall. Only when the camera catches the intruder's reflection does the point-of-view switch from hers to ours.

Korean writer-director Jung Byung-gil likely employed this transition simply because it looks cool. But the moment serves also as a statement of the movie's logic, which is essentially visual. Jung shreds a simple story and then weaves the pieces into an intricate tapestry of flashbacks and pure-action scenes, with the individual strands often sewn together by pictorial rhymes.

The one-against-dozens woman is the title character, given name Sook-hee (Kim Ok-bin). She's there to avenge the murder of her new husband, the man she calls only "Mister" (Shin Ha-kyun). But Sook-hee's murderous intensity is also rooted in the trauma of her father's murder, which she witnessed as a girl more than a decade ago.

Sook-hee escapes the den of (apparently) thieves, only to be apprehended by police. Already a trained assassin, she's taken to a secret agency for further instruction. She'll remain an executioner, but one now working for the (possibly) good guys. They teach her killing and — as potential covers — cooking, acting, and ballet.

Her boss, a steely woman known as Chief (Kim Seo-hyung), is concerned only with skill and ruthlessness, not the righteousness of the organization's work. She never delivers the self-justifying speech that would be obligatory in a Hollywood flick. Instead, Chief's resolve is underscored in a moment when she ignores Sook-hee's feelings while revealing absolutely none of her own.

Sook-hee's new job is complicated by the fact that her brief marriage left her pregnant. Her training complete, Sook-hee moves with her young daughter into an agency-provided apartment in suburban Seoul. Her new cover? Theater actress. Her new neighbor? A cute guy (Bang Sung-jun) and agency-assigned watcher who's also a potential boyfriend.

In a world of chaos, love is the only force more powerful than violence — although often not stronger than death.

As the latest baroque Korean revenge fantasy, The Villainess inevitably recalls the movies of Park Chan-wook. (Kim Ok-bin appeared in Park's Thirst; Shin Ha-kyun was in both that film and Sympathy for Mr. Vengeance.) Other precursors include Luc Besson's La Femme Nikita and Gareth Evans' The Raid, whose close-quarters mayhem Jung emulates repeatedly. After the opening's slaughter in tight hallways, the director stages battles in a hurtling bus and — with swords on motorcycles — within a narrow highway tunnel.

Expertly edited, photographed, and choreographed, The Villainess also benefits from Koo Ja-wan's percussive score and performances that persuasively shift between commonplace emotions and supernatural ferocity. Kim Ok-bin seems human even when the character she's playing is a just an action figure.

Sook-hee is a puppet, of course, and not just of Chief. The director also manipulates her to appeal to the male enthusiasm for pretty women who turn out to be exceedingly dangerous. Jung might be commenting on that taste by sending his heroine to a school where both marksmanship and pirouettes are part of the curriculum. But probably not. Most likely he conceived the notion of homicidal ballerinas just because they look cool.