Accessibility links
Stream Dälek's New Album 'Endangered Philosophies' For nearly 20 years, the searing sound collages of experimental hip-hop group Dälek have invited listeners to expand their understanding of what the genre can sound like. 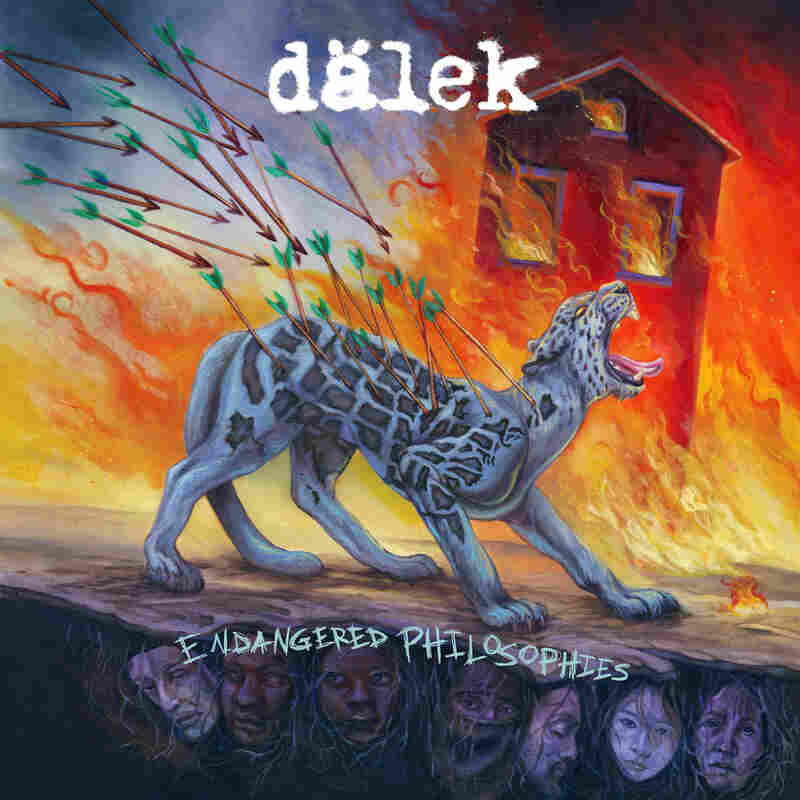 For nearly 20 years, the searing sound collages of experimental hip-hop group Dälek (pronounced DIE-uh-leck) have invited listeners to expand their understanding of what the genre can sound like. The Newark, New Jersey group's noise rock-influenced samples have drawn comparisons to shoegaze bands like My Bloody Valentine and serve as a surprising yet fitting platform for a rapper like MC Dälek, aka Will Brooks, to display his image-rich lyricism.

In the early years, core members Brooks and producer Oktopus, aka Alap Momin, developed the harsh yet harmonic sound the group became known for. Along with producer Joshua Booth and turntablist Still, aka Hsi-Chang Lin, Dälek created a handful of critically acclaimed albums in the 2000s, until Booth, Lin, and Momin each moved on to other pursuits, which led to the group going on hiatus.

But by 2015, Brooks says he missed the noise and reformed the group. Their new album Endangered Philosophies is the second release since putting together a new lineup that isn't all that new. DJ rEk was the group's live turntablist when the group toured for its 1998 debut Negro Necro Nekros, and has returned to lend his scratching talents to Dälek. Longtime collaborator Mike Manteca, a source of many of the group's signature electronic and guitar sounds, stepped into a central production role. Will Brooks, the sole constant in the group, continues to pen incisive lyrics that express despair at the African-American condition. Combined with the distorted backbeats from rEk and Manteca that underline that distress, the resulting trio provides seamless continuity from the days of the group's classic oeuvre to a new era where it is still a vital voice.

Some songs on Endangered Philosophies respond to events that inspired the Black Lives Matter movement. On "Weapons," Brooks references the death of Eric Garner, who was approached by New York City police officers on suspicion of selling loose cigarettes and put into a fatal choke-hold: "Been receiving conflicting reports / Reality's warped / You could lose breath over untaxed Newports." As ambient guitars whorl beneath the chorus, Brooks makes a call for a divided community to pull itself out of disarray and present a united front against police brutality, rapping "Regain perspective / We've all been off message / We won't win all sectioned / As one, we all weapons."

Despite the melancholy that fuels each track, Will Brooks' lyrics reveal a belief that in a crucible of trying times, hope can emerge. On the album closer, "Numb," Brooks raps "Perhaps we all broken / Current state got me heartbroken / Gotta say what we all hoping / Explosive times will get the illest minds open," suggesting that reckoning honestly with the state of race relations in the United States will eventually lead to change. For now, the turbulent music of Dälek will keep challenging its listeners with an intense sound evoking pain that cannot be ignored.