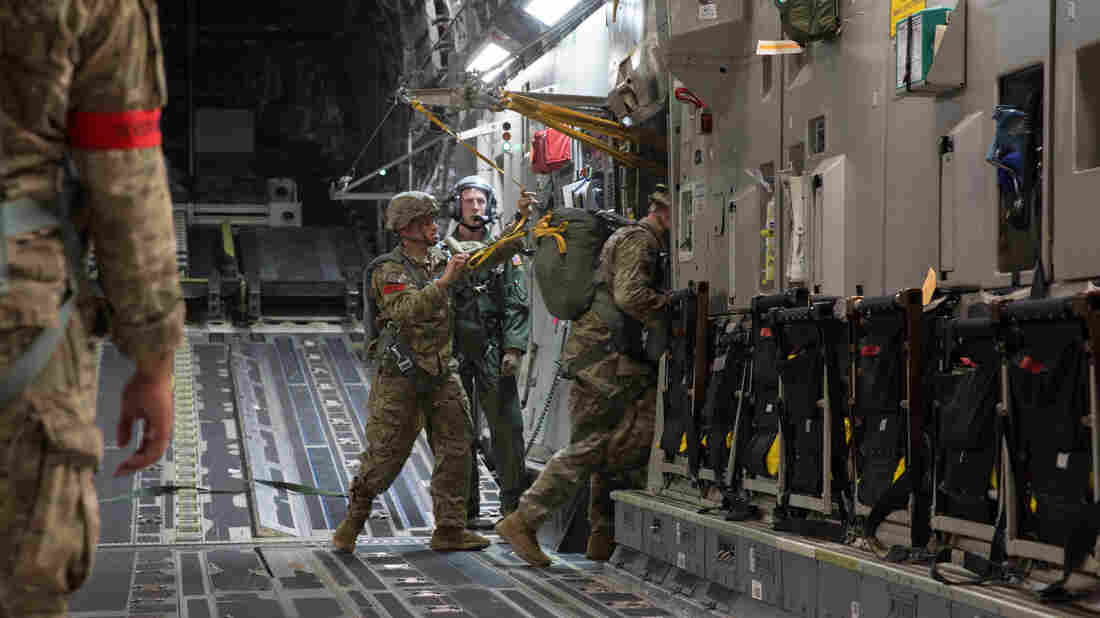 A paratrooper from the 82nd Airborne Division jumps out of a C-17 jet transport during a training jump last month at Fort Bragg, N.C. Matt Couch/WUNC hide caption 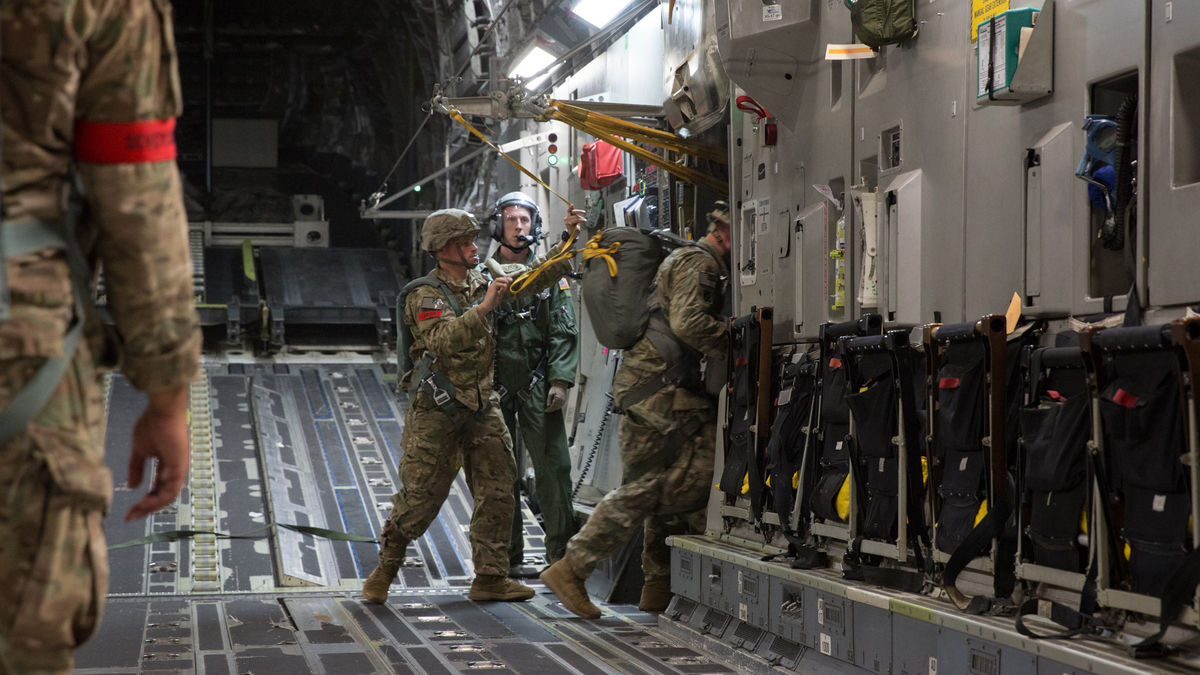 A paratrooper from the 82nd Airborne Division jumps out of a C-17 jet transport during a training jump last month at Fort Bragg, N.C.

The 82nd Airborne Division's identity and culture are built around one thing: parachuting into combat.

But the division was formed in 1917, a quarter-of-a-century before there was such a thing as paratroopers.

In the popular imagination, its story starts with a single man.

"That's Sgt. York's helmet that he wore on the day he earned his Medal of Honor," said historian John Aarsen, director of the division's museum at Fort Bragg, N.C., as he stood in front of a display case. "And that's his uniform that he toured the U.S. in."

York has been called the greatest American hero of World War I. He killed more than 20 German soldiers while assaulting a machine-gun unit and almost single-handedly captured another 132.

And yes. The division has its own museum. And a series of podcasts on the unit's history.

Civilians can visit, but the 82nd Airborne mainly uses it for something else.

In short, the division has turned its extraordinary history into a crucial tool.

Every new paratrooper is brought to the museum. It's a way of maintaining a consistent culture and set of values in an organization that has constant turnover as soldiers cycle in and out — far more turnover than most civilian companies experience.

That history offers lessons in tactics and strategy. And helps young soldiers deal with a job so daunting that their method of getting to the battlefield can kill them.

"An 18-year-old in 1943 jumped out of the door over Sicily, and did what he needed to do," Aarsen said. "And you are an 18-year-old in the United States Army, and what I'm asking you to do is no different than what happened in that door in Italy. And you can do it. There are 75 years of soldiers like that, soldiers standing in that door all this time." 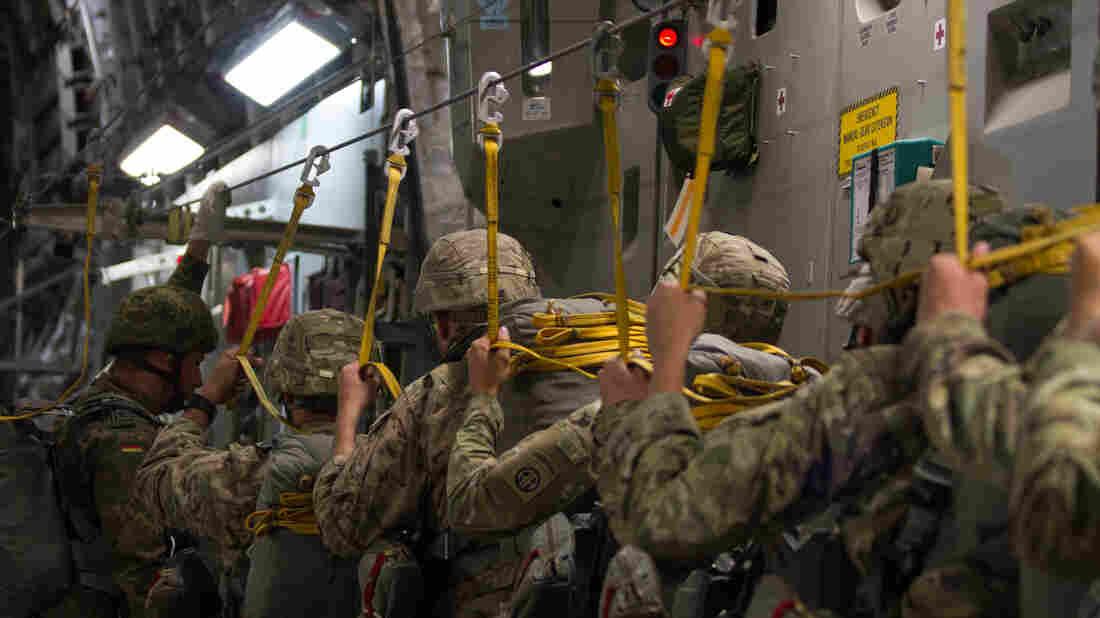 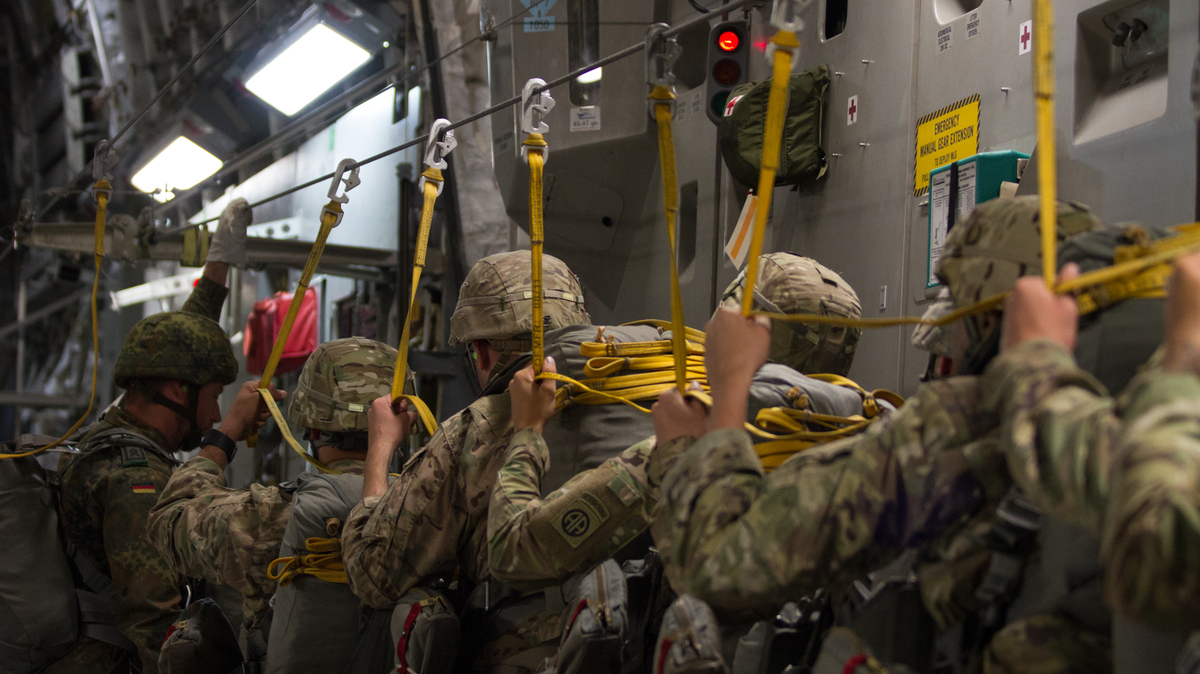 Paratroopers with the 82nd Airborne Division walk towards the jump door during a training jump last month at Fort Bragg, N.C.

One of the 82nd's soldiers standing in a door on D-Day was 20-year-old Kenneth "Rock" Merritt. 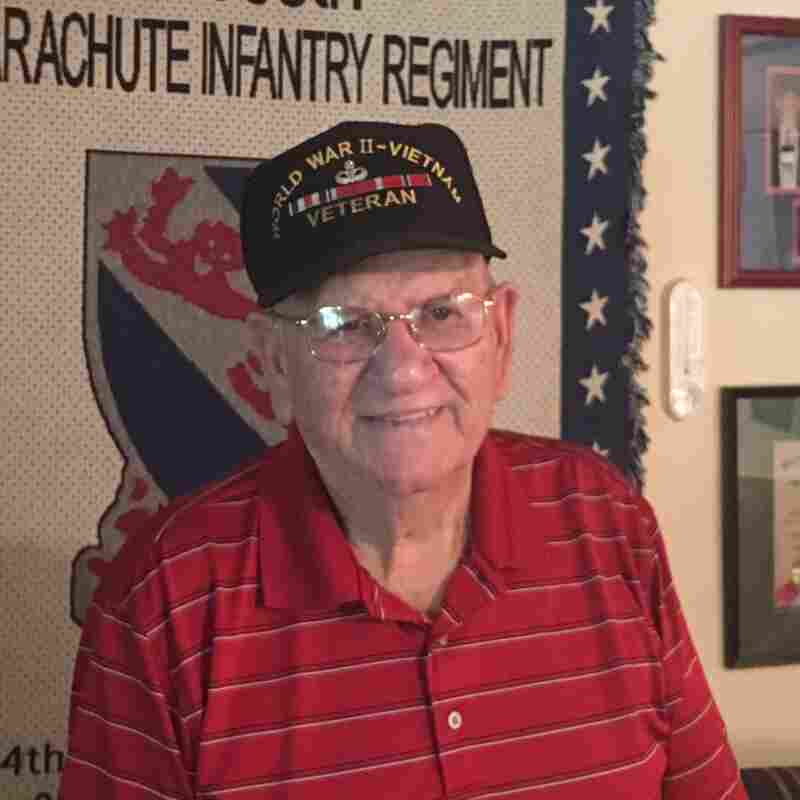 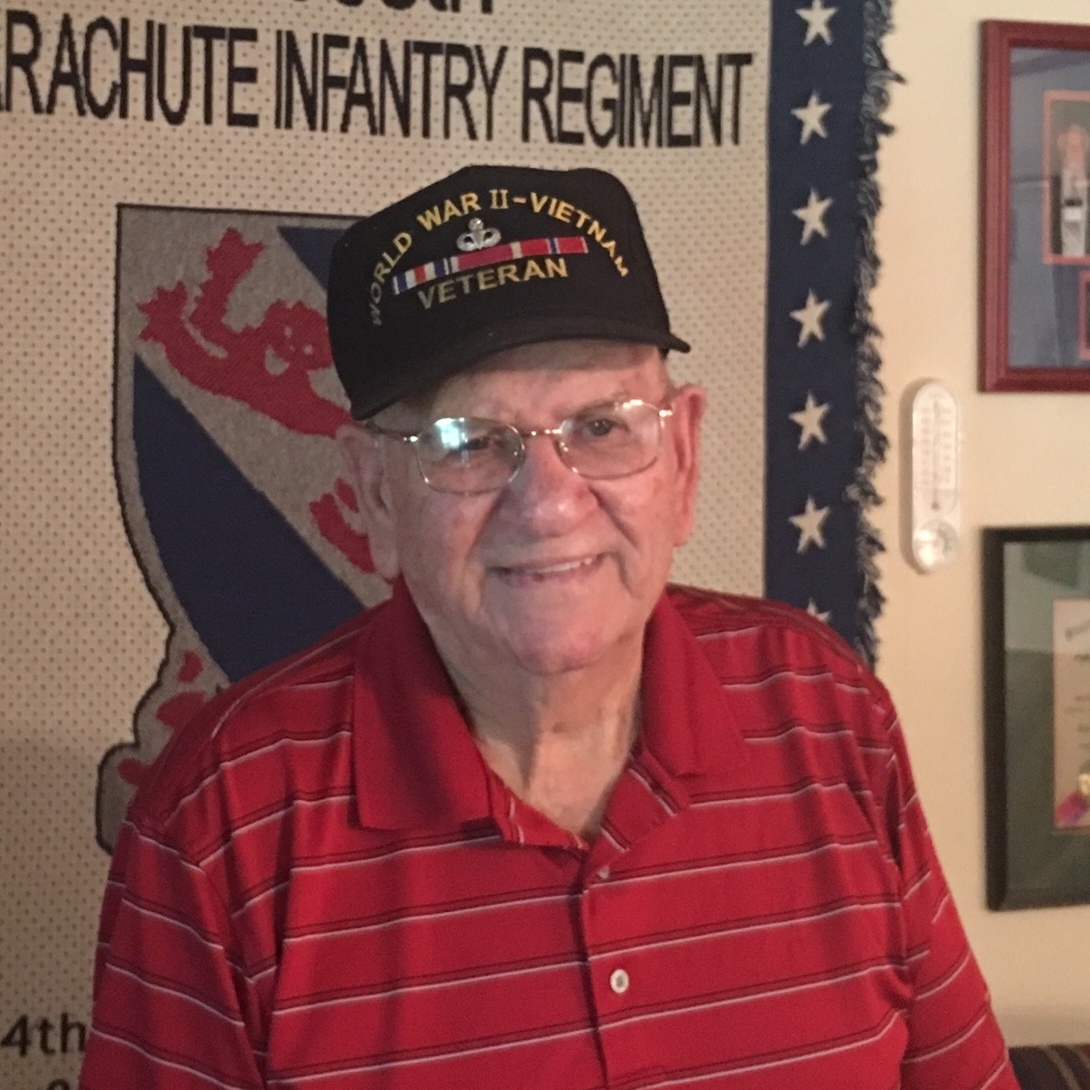 Kenneth "Rock" Merritt jumped into Normandy with the 82nd Airborne Division on D-Day in 1944.

He was the second man out of a C-47 transport over Normandy - hours before landing craft hit the beaches - into a sky lighted only by German tracer rounds.

"If somebody tells you, no, you're not scared, he's either lying or he's a fool," said Merritt, now a 94-year-old retired command sergeant major.

The plane was flying much lower than his practice jumps, and the parachute barely had time to slow his fall.

Merritt came down in in a briar patch, and a German machine gun fired at him as he wriggled out of his parachute harness. Then an American transport plane fell towards him, on fire. As it passed just overhead he saw the lines trailing out that had yanked open a load of paratroopers' chutes.

That, he thought to himself, meant they had gotten out.

Then Merritt collected his equipment and crept away to find the rest of his unit. What was left of it, at least.

"On D-Day, my entire chain of command got killed," he said. "Not wounded, not captured, all of them got killed."

Merritt was among the nation's first paratroopers. He said back then they were taught they could beat any five men in a fight, and that they were the best soldiers anywhere.

They were also taught to move up two levels of command if their leaders were lost in battle. By dawn, that training seemed clairvoyant.

Merritt says nearly 2,100 in his regiment made that jump. After a month of fighting, fewer than 1,000 were left.

He also was part of a big combat jump into Holland in a battle depicted in the movie A Bridge Too Far. And he fought in the Battle of the Bulge.

Later Merritt was sent to Korea and Vietnam, and retired after rising to one of the Army's highest positions for enlisted soldiers.

During 35 years in the Army, he served with various units. Many were good, he said, but none matched the spirit and leadership of the 82nd.

Battles Fought On Many Fronts, And Not Just In Combat

The full sweep of the unit's history is almost too much to absorb, from York's exploits, to the 82nd's dramatic role in the Normandy invasion, to a long list of other famous battles and conflicts, right up to multiple deployments to Iraq and Afghanistan. 82nd troops are still in both those countries now. 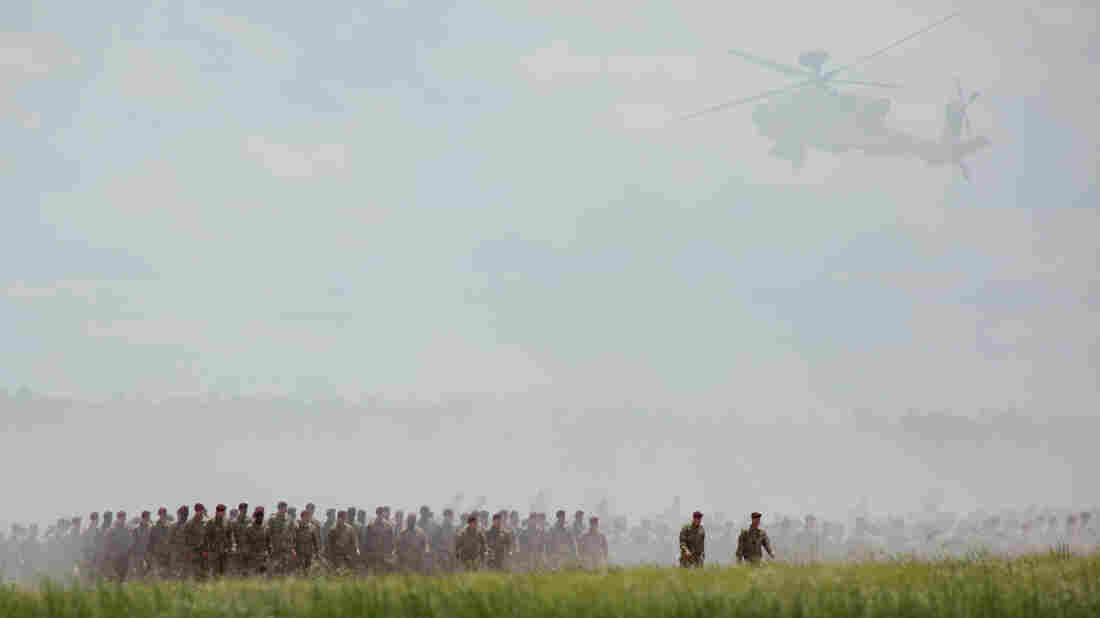 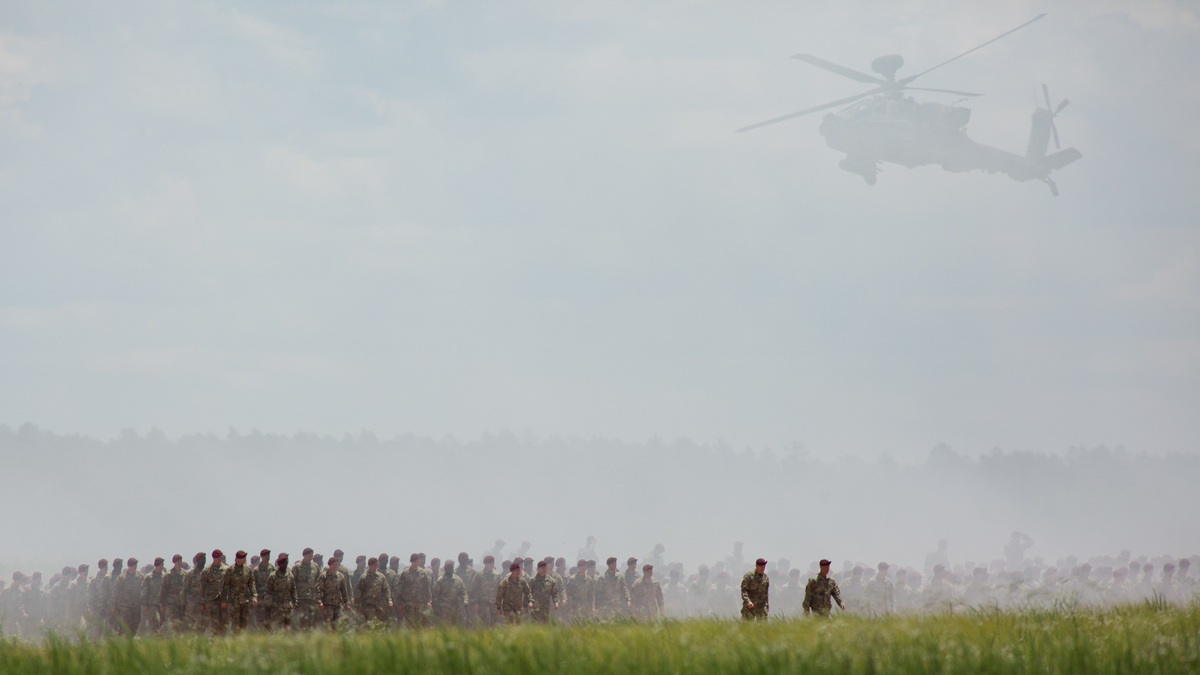 After World War II, it became the first Army division to be permanently integrated, and it has had roles in every major conflict since then except the war in Korea.

Soldiers of the division were sent to keep order at the desegregation of the University of Mississippi, to riots in Washington, D.C., after the assassination of the Rev. Dr. Martin Luther King, Jr. and to New Orleans after Hurricane Katrina. They served humanitarian missions in Haiti and south Florida after Hurricane Andrew.

The big parachute assaults in World War II were perhaps the most famous chapters of the 82nd's history. But they led to a lot of casualties, had mixed success and prompted a question that goes right to the heart of the unit's identity. A question people are still asking: whether it makes sense for the Army to maintain such a large unit of paratroopers.

Other units, particularly in special operations, make combat jumps with small numbers of troops. But large jumps have been rare since World War II and paratroopers of the 82nd haven't made a large jump since the invasion of Panama in 1989.

"But just as the 82nd doesn't do an airborne assault doesn't mean the capability hasn't been put to use," Aarsen said. "Hurricane Katrina was like that. The 82nd is the only unit in the Army that can load on an airplane 18 hours after you call it up and be moving to where ever you need it. Because it's rehearsed."

In one sense, the 82nd's specialty is parachuting. In another, it's being ready. One of the division's three brigades always has some of its soldiers ready to board aircraft, and ready to fight, within 18 hours. That's a role called Global Response Force.

That speed is something no other unit that size offers the Pentagon.

Sometimes being ready means not fighting at all. Aarsen said the Pentagon held the 82nd out of the war in Korea because it wanted a quick way to respond in case of surprise aggression from the Soviet Union.

And sometimes being ready means being used — but as a threat. The 82nd is credited with averting a conflict in Haiti in 1994 just by loading into planes and getting into the air.

One reason large combat jumps are rare is the increasing sophistication of anti-aircraft systems. The 82nd is experimenting, though, with something that could help against many foes: a light armored vehicle that can be dropped by parachute.

John Gordon, a senior defense researcher with RAND Corp., has been working with 82nd leaders on plans for the unit's future, including the use of something like the eight-wheeled LAV-25s the unit has borrowed from the Marines for testing.

The 82nd wouldn't need to use a full set of vehicles for every mission, but having enough ready would give it more flexibility, Gordon said.

"With many of these potential opponents today, the number and quality and range of their air defense systems is such that you're going to have to find a place to land the paratroopers outside the range of the air defense systems," Gordon said. "And if that distance is a long, long way and the paratroopers are limited to foot mobility it's going to take them a while to reach their objectives.

"But if the soldiers and enough vehicles could be dropped a short distance from an objective like an airport, they could be out of range of its anti-aircraft defenses, but close enough to attack quickly," he said. 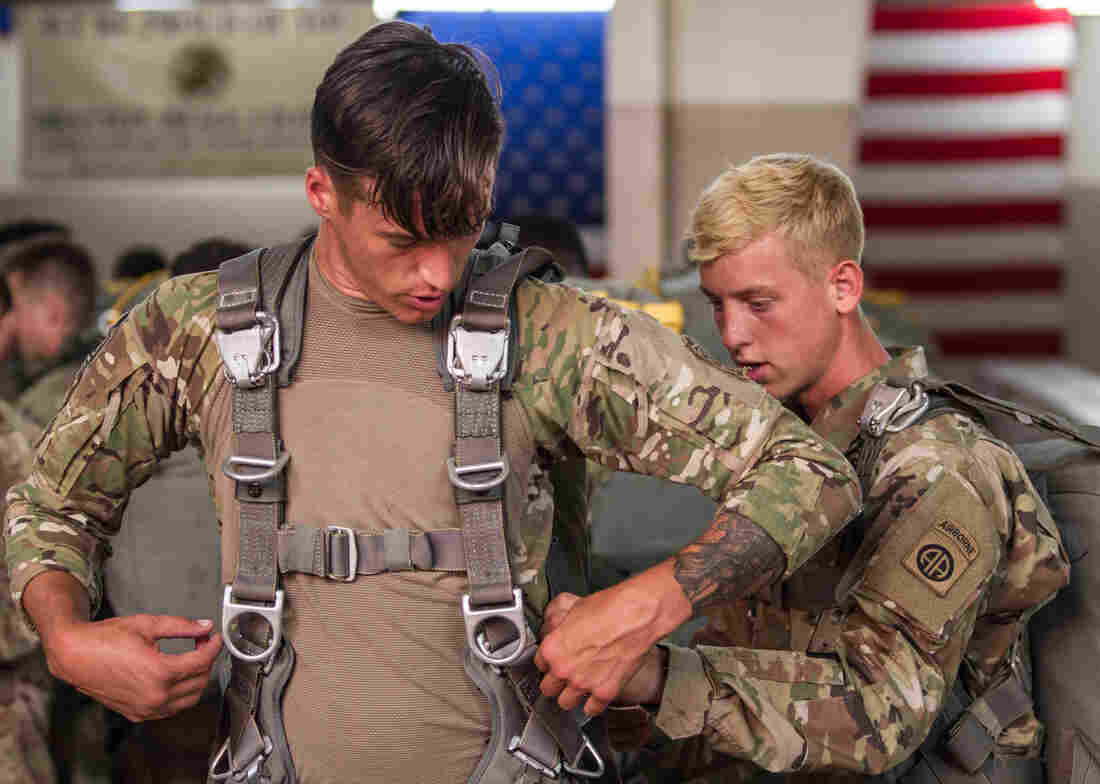 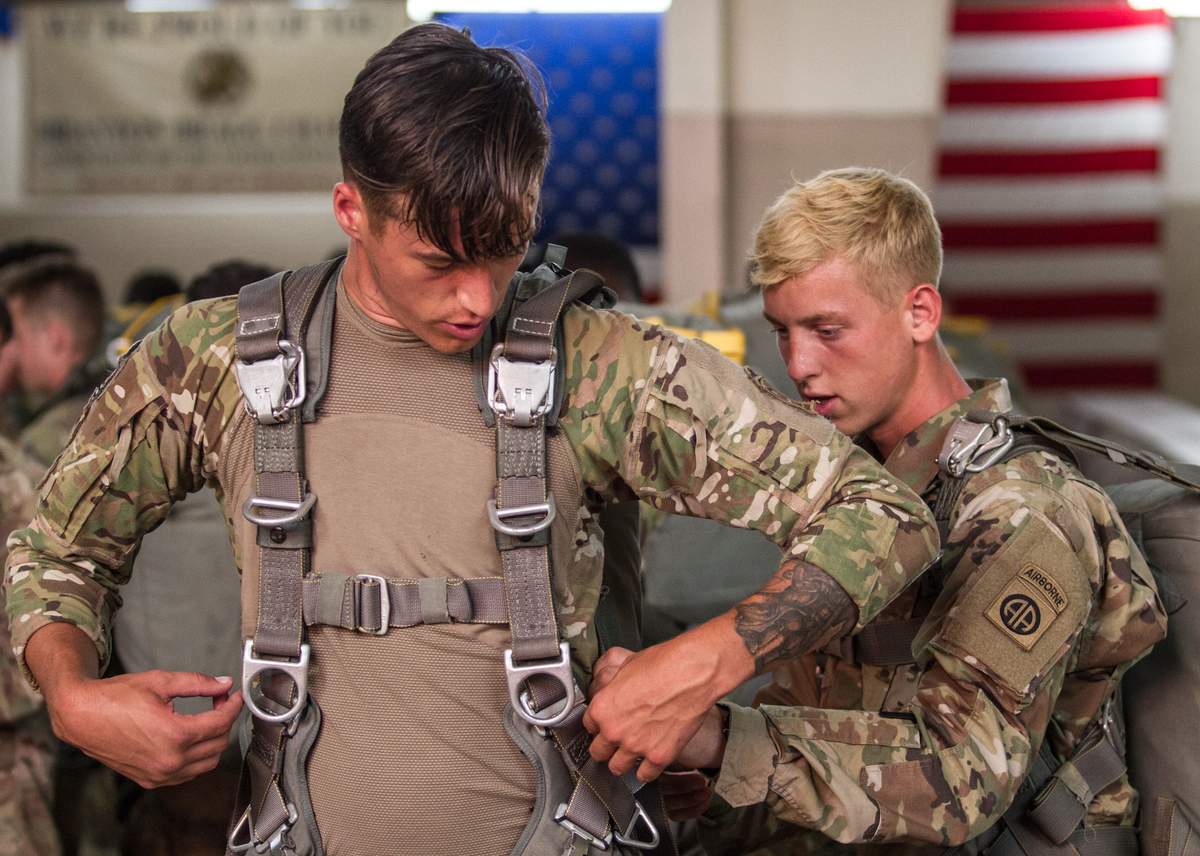 Aboard a hulking C-17 jet transport, young paratroopers prepare for a training jump. Army Spc. Kevin Bogucki is among them. As the plane banked and turned towards a drop zone, Bogucki was nonchalant about jumping out of a perfectly good aircraft for a living.

"They get a kick out of it when I tell people, it blows their mind," he said. "Me, it's old news now. Oh, I got another jump today."

Soldiers get hurt on jumps, and not just combat jumps. Mainly it's ankle injuries. Though there's worse. One of Bogucki's friends broke his hip after another plummeting soldier fell into his parachute and they got tangled.

They are all volunteers, one more thing that sets the 82nd apart.

Bogucki said that it was the extra $150 a month that first got his attention, but once he got into the 82nd, he said, it became obvious that all the talk about it being special wasn't just talk.

Now, he said, he believes that it really is better than other units.

"It is," he said. "Absolutely. You...go on training things like this all the time [and] it has to pay some dividends."

A few minutes later, Bugucki and dozens of other paratroopers stood, all burdened with heavy packs, rifles and parachutes.

They filed back to the two open doors of the huge jet, the men in front of Bogucki vanishing one at a time into the night sky until finally he was standing in the door.

Then, just as "Rock" Merritt had done so many decades ago, Bogucki jumped.