Accessibility links
'Disjointed' Is Like Any Workplace Sitcom — With More Pot, Sex And Language Set in a medical marijuana dispensary, the big networks all turned the show down. But Netflix picked it up and co-creator Chuck Lorre says, ultimately, it's about characters who care for one another. 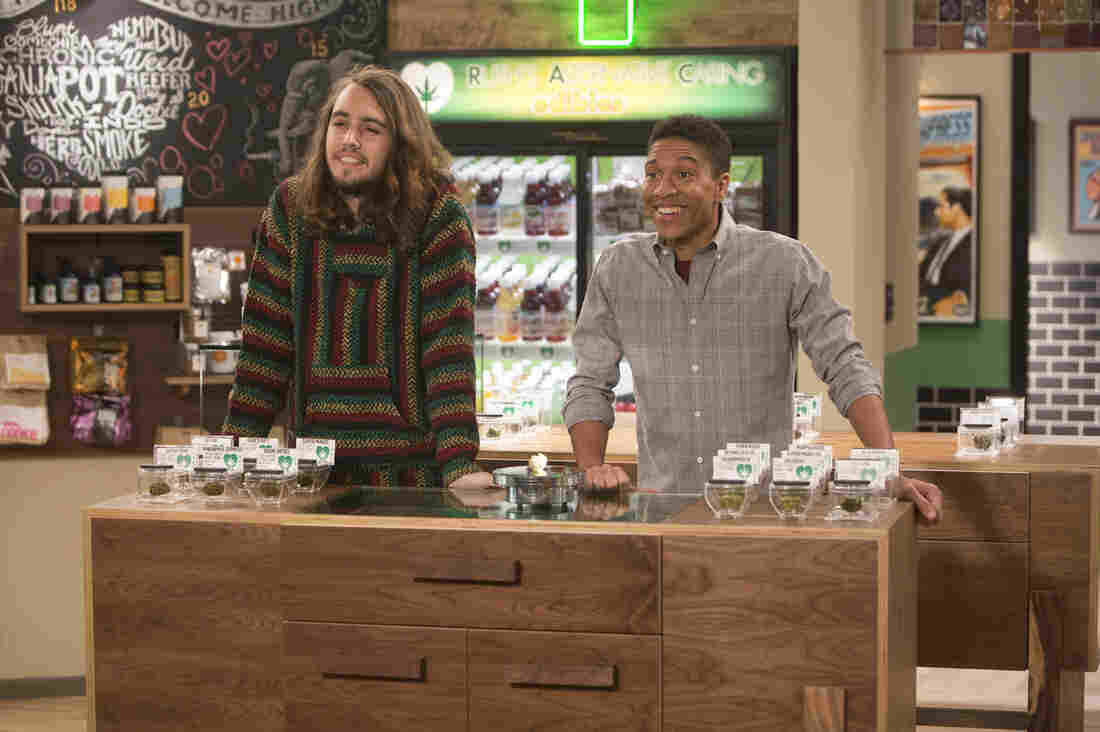 Dougie Baldwin (left) and Aaron Moten are two of the stars in the new Netflix comedy Disjointed, which is set in a medical marijuana dispensary. Patrick Wymore/Netflix hide caption 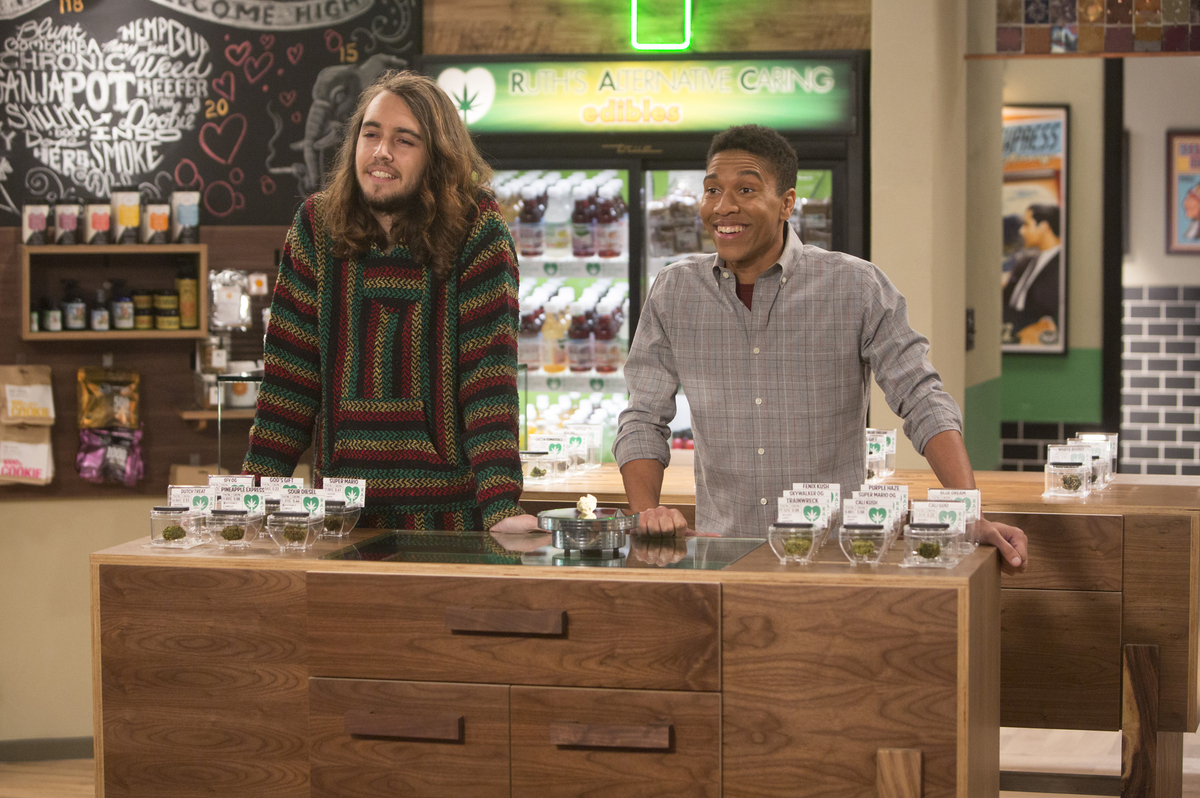 Dougie Baldwin (left) and Aaron Moten are two of the stars in the new Netflix comedy Disjointed, which is set in a medical marijuana dispensary.

Chuck Lorre is, without question, television's sitcom king. He created two of today's top money-making syndicated shows — The Big Bang Theory and Two and a Half Men — and his other hits over the years include Dharma & Greg, Grace Under Fire, Mike & Molly and Mom.

So why did every single broadcast network turn down his latest sitcom?

The show's Los Angeles set is a hippy-looking shop filled with psychedelic posters and glass cases displaying actual product. On a recent day of shooting a prop guy was handing out vape pens to the actors. "We'll be vaping," he says. "Vaaaaping."

Waaaay too edgy for Lorre's home network, CBS — even though he's earned the company more than $1 billion with The Big Bang Theory, according to Deadline Hollywood.

"We didn't even get a meeting out of it," Lorre said during an interview at his production offices in Burbank. "We sent the script and got back: No."

"The fact that they're smoking pot — if they were sitting at a bar in Boston drinking with Sam and Norm and Cliff — they're still a surrogate family and people care about each other," he says.

But the family tension in Disjointed is also more literal, deriving partly from the dynamic between Bates' Earth mother character and her much more corporate son. He's trying to convince her to build her pot dispensary into a national chain. 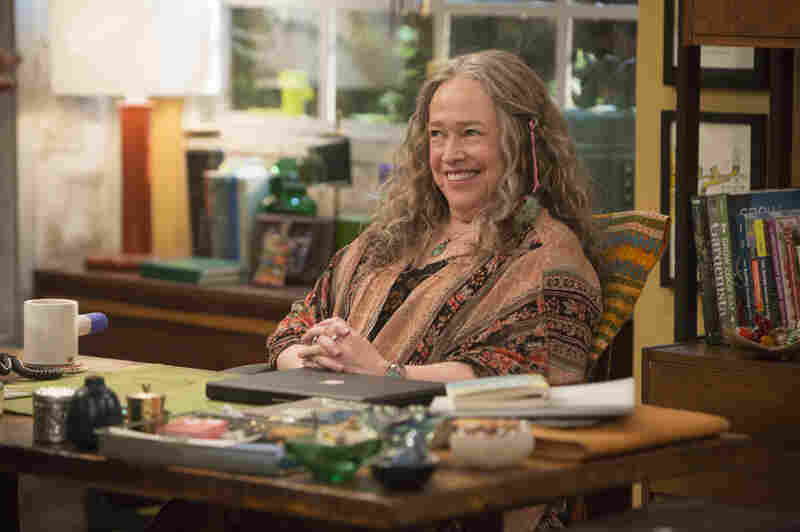 Disjointed hired a cannabis consultant to make sure the actors pretending to smoke on the show were doing so believably. Kathy Bates, above, says she didn't need coaching. Patrick Wymore/Netflix hide caption 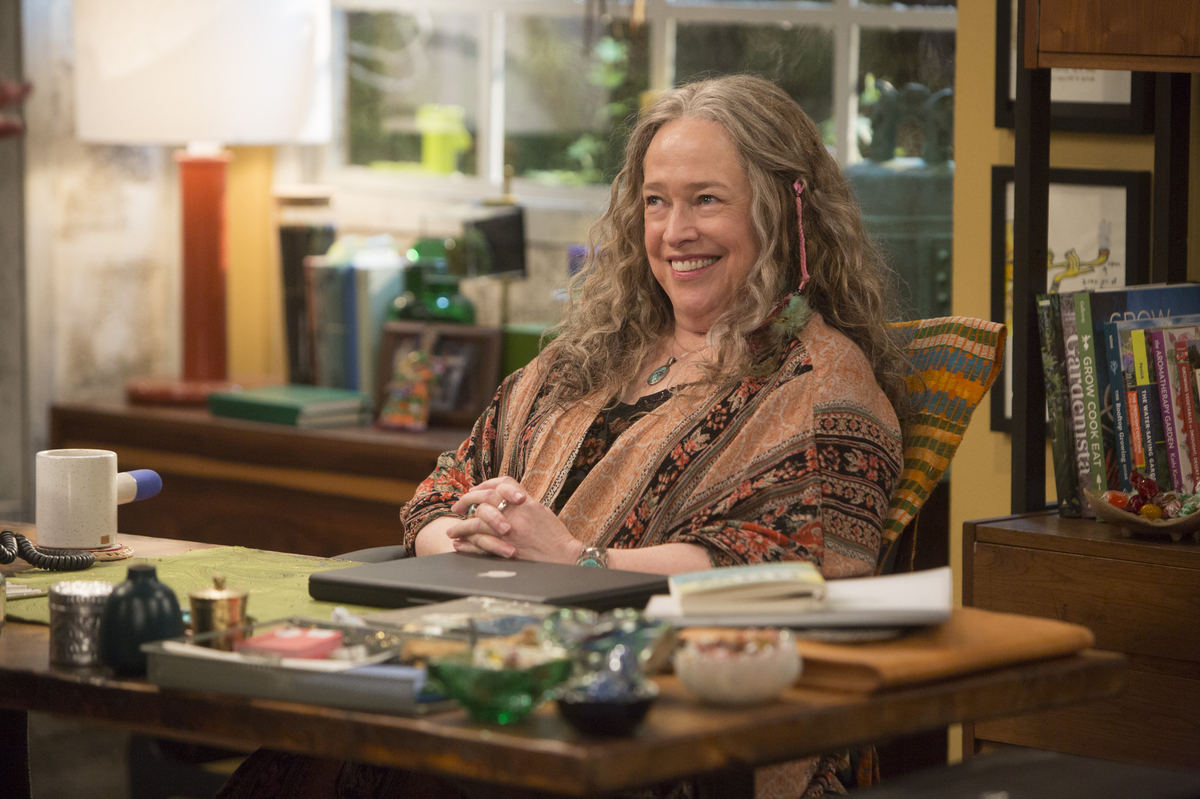 Disjointed hired a cannabis consultant to make sure the actors pretending to smoke on the show were doing so believably. Kathy Bates, above, says she didn't need coaching.

"The gold rush is on, and pretty soon, someone's gonna become the Walmart of cannabis," he coaxes. "Why not us?"

"Walmart is evil," Bates' character retorts (just before her son reminds her that she shops there herself).

"I am not a real doctor, but I am board certified by Snoop Dogg," she jokes on the Disjointed set, where she helps select props, consults on set design and guides the actors on how to properly pretend to smoke weed. "They tend to hold the joints like cigarettes ... I hate that," she says.

Bates says she needed no such coaching; the subject matter is partly what drew her to the show. "I have chronic pain and have had my doctor give me a permit to have medical marijuana and it's made such a difference to me," she explains.

Lorre doesn't use cannabis himself, but wryly offers that he's "certainly had a great deal of experience with the various and sundry chemicals, both fermented and otherwise."

People are watching Netflix stoned with or without our show — by the millions, I would imagine. If the only people who watch us are stoned people who watch Neflix, that's an enormous audience.

It's no secret that Lorre's been in recovery for many years. He does not discuss it directly, but his shows do. His show Mom, for example, is about a pair of recovering addicts, a mother and daughter. When I ask Lorre how he feels about making a comedy about people using drugs, he replies: Why not do it?

But ... let's be honest; pot humor isn't always that funny unless you happen to be high.

"Pot humor can be slow," acknowledges co-creator David Javerbaum. "It can very slow and it can be very arduous and that's not gonna work with the rhythm of a multi-cam[era sitcom]. It's gotta be fast."

Javerbaum is a former head writer for Comedy Central's The Daily Show and the Broadway play An Act of God. Disjointed was entirely his idea. Javerbaum told NPR that he wants viewers to feel high when they watch it and it's OK with him if most of the audience is actually stoned.

"I mean, people are watching Netflix stoned with or without our show," he points out. "By the millions, I would imagine. If the only people who watch us are stoned people who watch Neflix, that's an enormous audience. And that would be enough."

Back on the Disjointed set, a director shouts out, "We're rolling!" On this show, that could mean any number of things.

Earlier online and radio versions of this story incorrectly included How I Met Your Mother among the shows created by Chuck Lorre. He was not involved in the show.