Accessibility links
Take A Walk On The Wilder Side Of Death With 'Reincarnation Blues' Michael Poore's new novel is surprisingly goofy for a book about dying. It's the story fishing guide Milo, who's just been eaten by a shark. Oh, and he's in love with Death, who's also named Suzie. 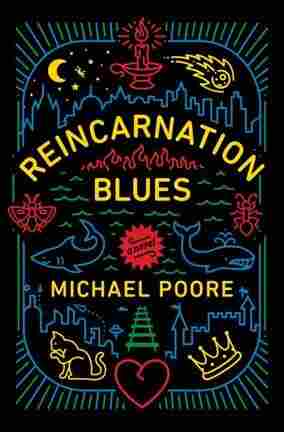 For a book that is all about death and dying — for a book which counts among its main characters an actual embodiment of Death (named Suzie) — Michael Poore's Reincarnation Blues is surprisingly goofy.

And I mean that in the sweet way. The hard way because goofy isn't easy to pull off in a serious book (which Reincarnation Blues is), but Poore does it brilliantly. It is the story of 10,000 deaths — some good, most bad — and it begins like this: "This is a story about a wise man named Milo. It begins on the day he was eaten by a shark."

That's chapter one, page one, line one (and two). And it sets a tone, as they say. The book — though beautiful, occasionally heartbreaking, sometimes deep — never gets any heavier than that. There's a frivolity to it (for lack of a better word) that works only because death, in Poore's world, is just a doorway. You go through it just to see what's on the other side.

But in the beginning, Milo is a wise man and fishing guide in the Florida Keys to whom the lost and hurting flock turns for wisdom, answers, explanations, occasionally fish. Milo drinks a bit. He's kinda lazy. His best friend is a dog that used to be a bus driver.

In Life After Life, 'Incarnations' Spins A Sinuous Tale Of Soul Mates

But Milo is undoubtedly wise. All you have to do is look in his eyes and you can see it. He's an old soul (the exhausted phrase on which the entire novel hangs), but unlike most old souls, Milo has an accounting. He has lived 9,995 lives. He's been a man and a woman and a cricket. The shark that's about to eat him? It's been other, different sharks and other, different fish, and also the Strawberry Queen of Troy, Ohio. Because that's the central conceit of Reincarnation Blues. Everything has been something before. Or someone. And most things have been many someones before.

But no one has been as many someones as Milo.

And yeah, like I said, it all reads pretty goofy, right? But trust me when I say that Poore sells it. He makes this all make sense. Grounds it in actual emotion and actual risk and reward. Suzie is kind of a mopey emo Death, and when she and Milo are together (something they only get to be in between Milo's many incarnations) they work like Sid and Nancy — just a couple of punk kids who don't care very much for how anyone thinks they ought to be spending their (many) lives.

'Reincarnation Blues' is like 'Cloud Atlas' written by Douglas Adams.

Structurally, Reincarnation Blues details Milo's last five lives — his last five chances to get it right. But the best pieces of it are the shrapnel of Milo's other experiences. Past lives and future ones, brief asides, stray memories, tiny glimpses into entire existences sometimes winnowed down to a single sentence. Poore just throws them down like bright pennies on the sidewalk. A lifetime spent as a juggler who once lifted an elephant. Another spent as a tree. A childhood spent fighting a losing battle against cancer is handled in one line that took me right in the throat when I read it and went down like trying to swallow a brick sideways. The ones that read like science fiction are the best and wildest of them — a hundred perfect words to describe a life that has enough in it to fill a novel all on its own, a page that might've been a trilogy of Hollywood blockbusters in someone else's hands. And Poore has dozens of them, each one like a short story buried in the pulp of something so much larger.

So read it, okay? It's the most fun you'll have reading about a man who has been killed by both catapult and car accident. It has one of the best first chapters of the year, and the second one is even better. Reincarnation Blues is like Cloud Atlas written by Douglas Adams. Something that could've been so grim and sad turned bright and cheery (and also sad) by a mind just made for the appreciation of absurdity, dry humor, shark attacks, philosophical anarchy, and an acceptance of the hard fact that every life is a death sentence, made valuable only by what we choose to do between the first day and the last one.