Accessibility links
Neighborhoods Worry About Living Amid Oil And Gas Development After a deadly home explosion in Northern Colorado, residents want to change the rules on how close their homes and schools should be to oil and gas wells. 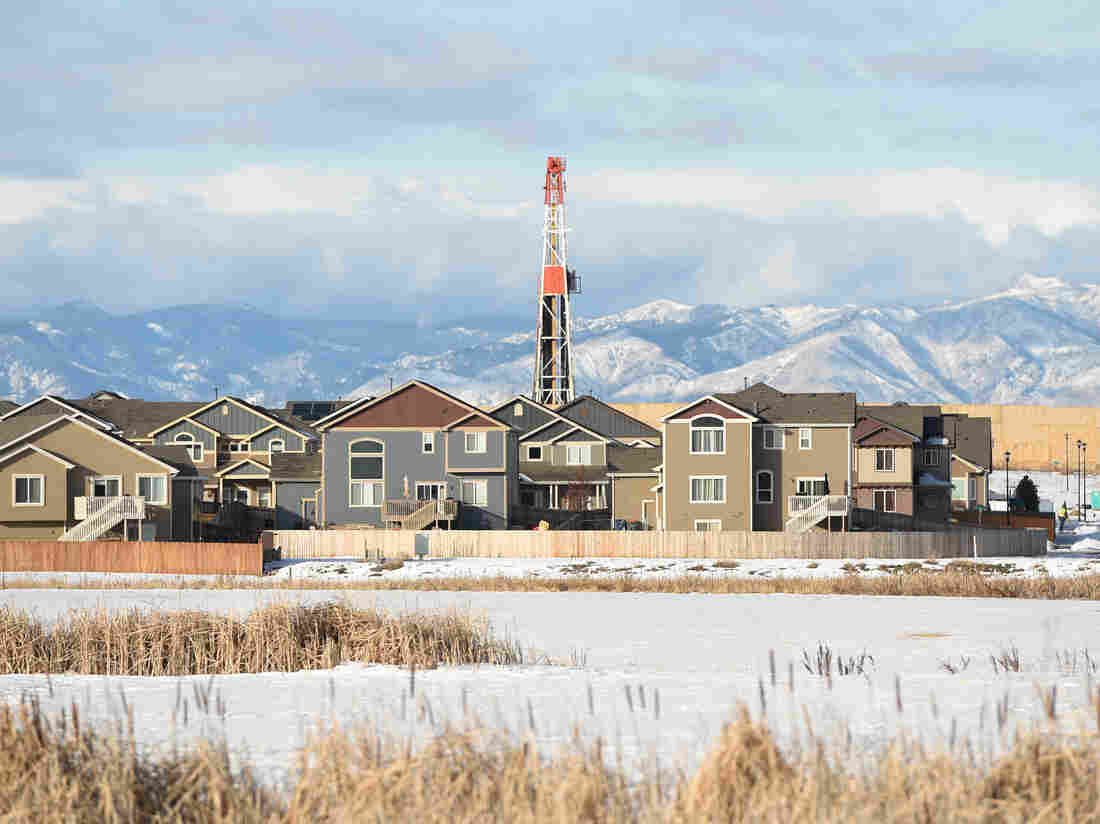 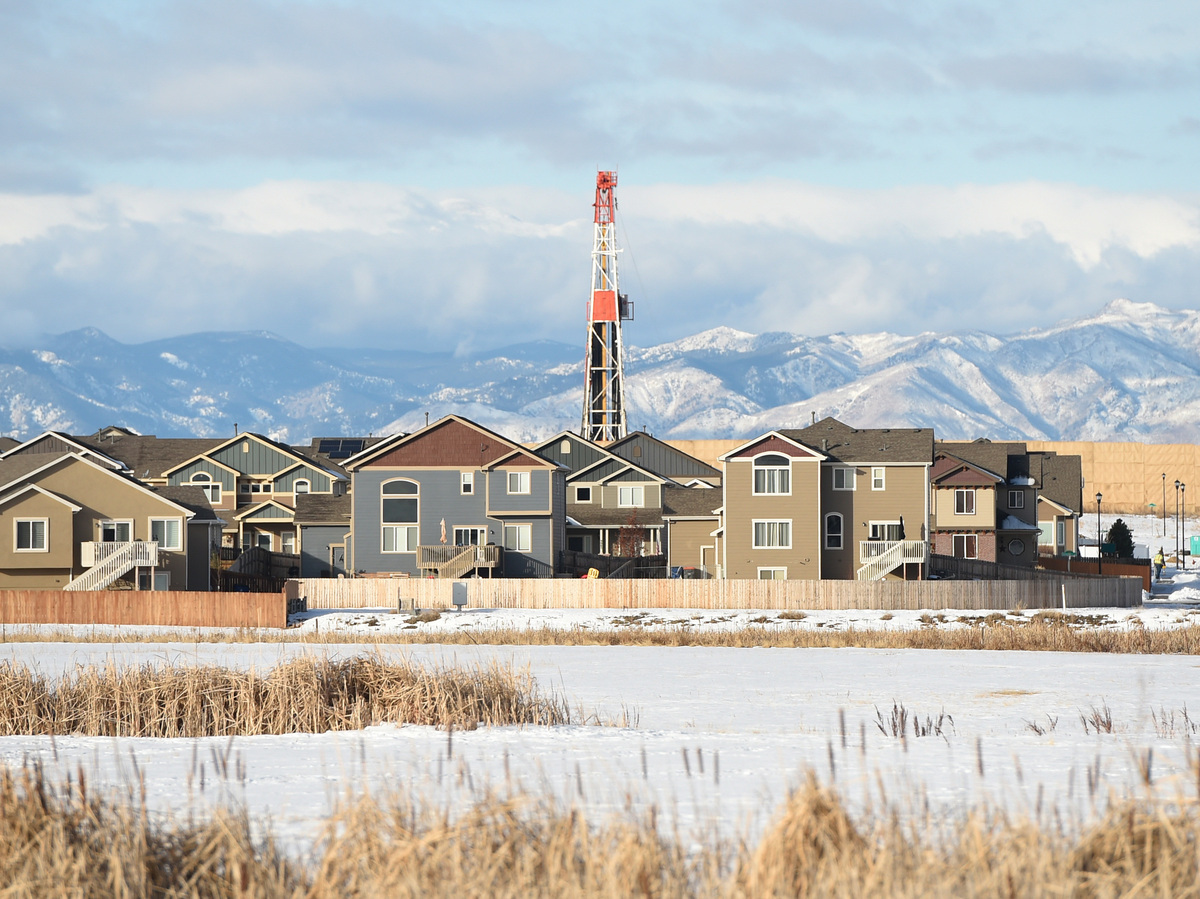 Oil and gas operations near a subdivision in Firestone, Colo.

In Northern Colorado, there are growing concerns in neighborhoods and communities about oil and gas wells sitting too close to their homes and schools. Last Spring, the danger became clearer when a home exploded in Firestone, Colo., killing two people, after a small pipeline connected to a well began leaking odorless gas into the basement.

"We used to be worried about asthma and cancers and ruining our water. Now we're also worried about our houses blowing up," said Barbara Mills-Bria, of Lakewood, Colo., during a recent public meeting with oil and gas regulators in Denver.

Some community members support oil and gas development, others want drilling banned entirely. Many just want it kept away, at a safe distance. 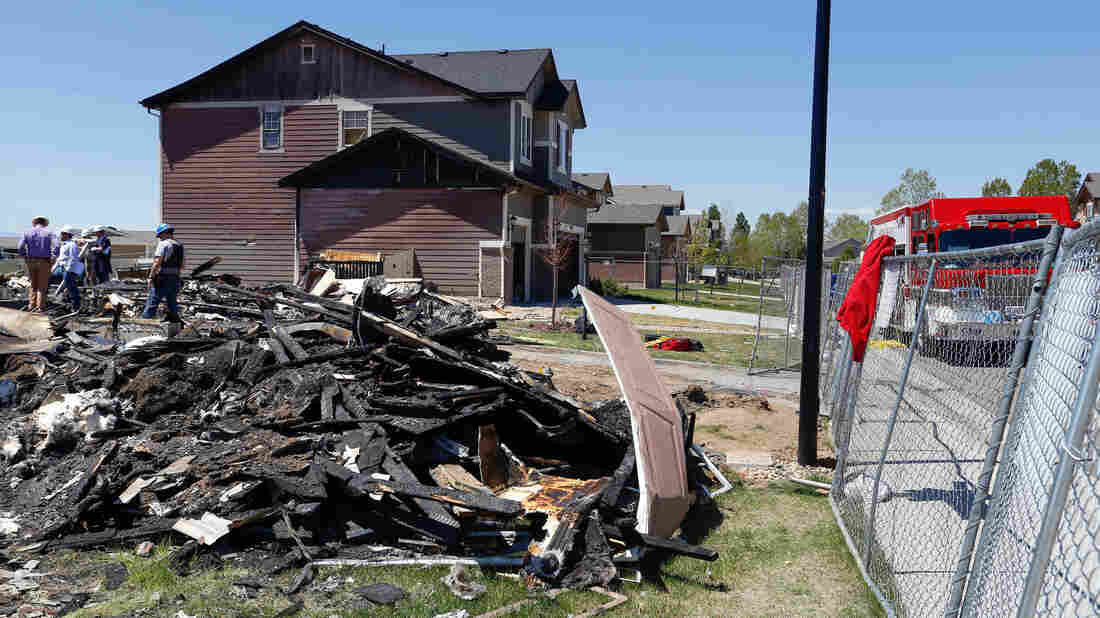 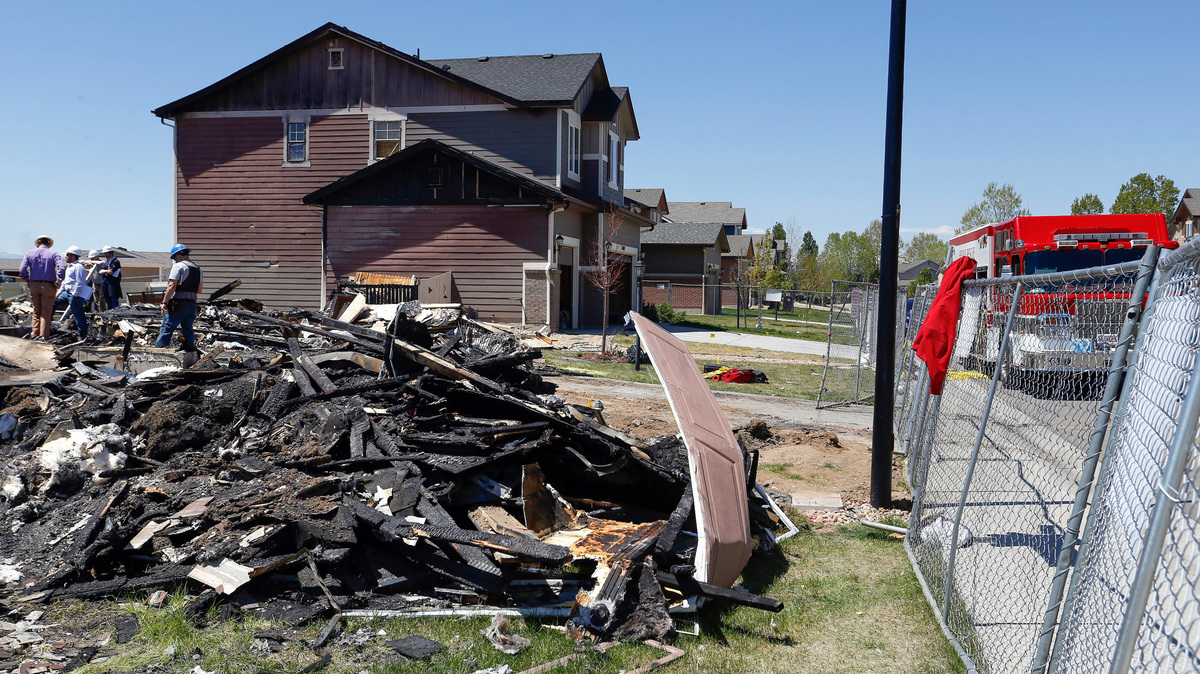 Workers dismantle the charred remains of a home where an unrefined petroleum industry gas-line leak explosion killed two people inside their home in Firestone, Colo.

Currently, minimum allowed distances – called setback – aren't entirely based on math and science. They are usually a compromise between competing interests.

The stated intent of Colorado's setback regulation is to "protect health, safety, and welfare." But there are other factors at play. Any increase to the setback would restrict where companies could drill. So, operators have fought changes.

In 2016, members of the oil and gas industry dumped over $15 million dollars into fighting a pair of ballot proposals. One advertisement accused "efforts to shut down oil and natural gas" as being "very devious."

Those proposals – including one that would have increased the state setback to 2,500 feet – went nowhere, but smaller changes have gone through. In 2013, after months of contentious debate, members of the Colorado Oil and Gas Conservation Commission (COGCC) voted to update the state's setback regulations, increasing the existing distance of 150 feet in rural areas and 350 feet in urban areas to a uniform 500 feet statewide.

The setback from structures like above ground utilities and public roads was bumped up to 200 feet, from 150 feet. The original safety setback of 150-feet was a calculation of 1.5 times the height of a drilling rig, meant to protect homes and buildings if a rig toppled over.

The new setback of 500 feet from homes was a compromise among everyone from energy companies, to farmers, to home developers, to concerned residents. It addressed nuisances like noise and lighting issues. But, according to rule-making documents, there wasn't enough data to address more serious problems like air emissions.

"There was not, in our opinion, sufficient, clear, undisputed scientific evidence to base a setback number on," says Matt Lepore, director of the COGCC. "Frankly, nothing would make me happier than [to have] somebody to tell me 1,007.5 feet is safe for everybody. That would be fantastic. That's not going to happen."

But are current setbacks adequate? Researchers tried to answer that question in a 2016 paper, published in a journal called Environmental Health Perspectives. They looked at existing setbacks in Texas, Pennsylvania and Colorado, ranging from a few hundred feet to over a thousand. The conclusion was that these distances are not always good enough to protect people from risks like air emissions and explosions.

On top of that, setbacks aren't set in stone. In Colorado, operators can ask for permission to drill closer than 500 feet and homes can be built closer than that. 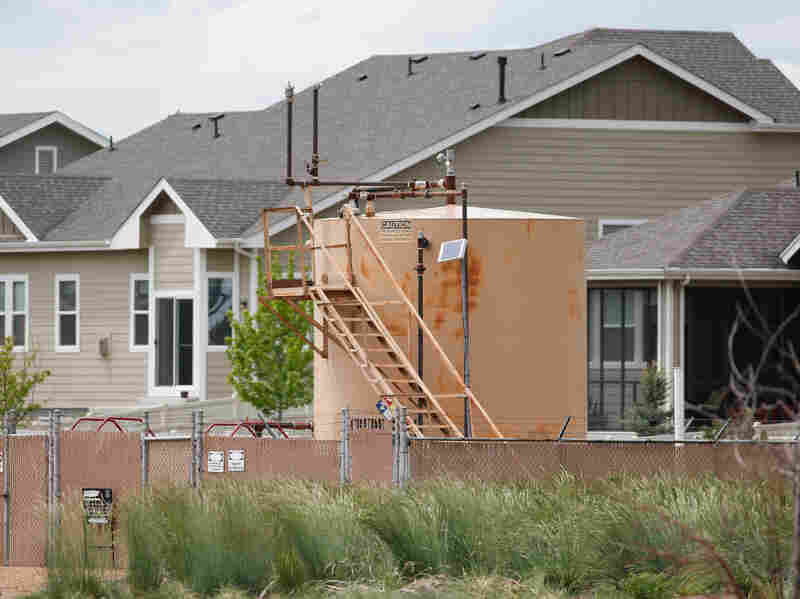 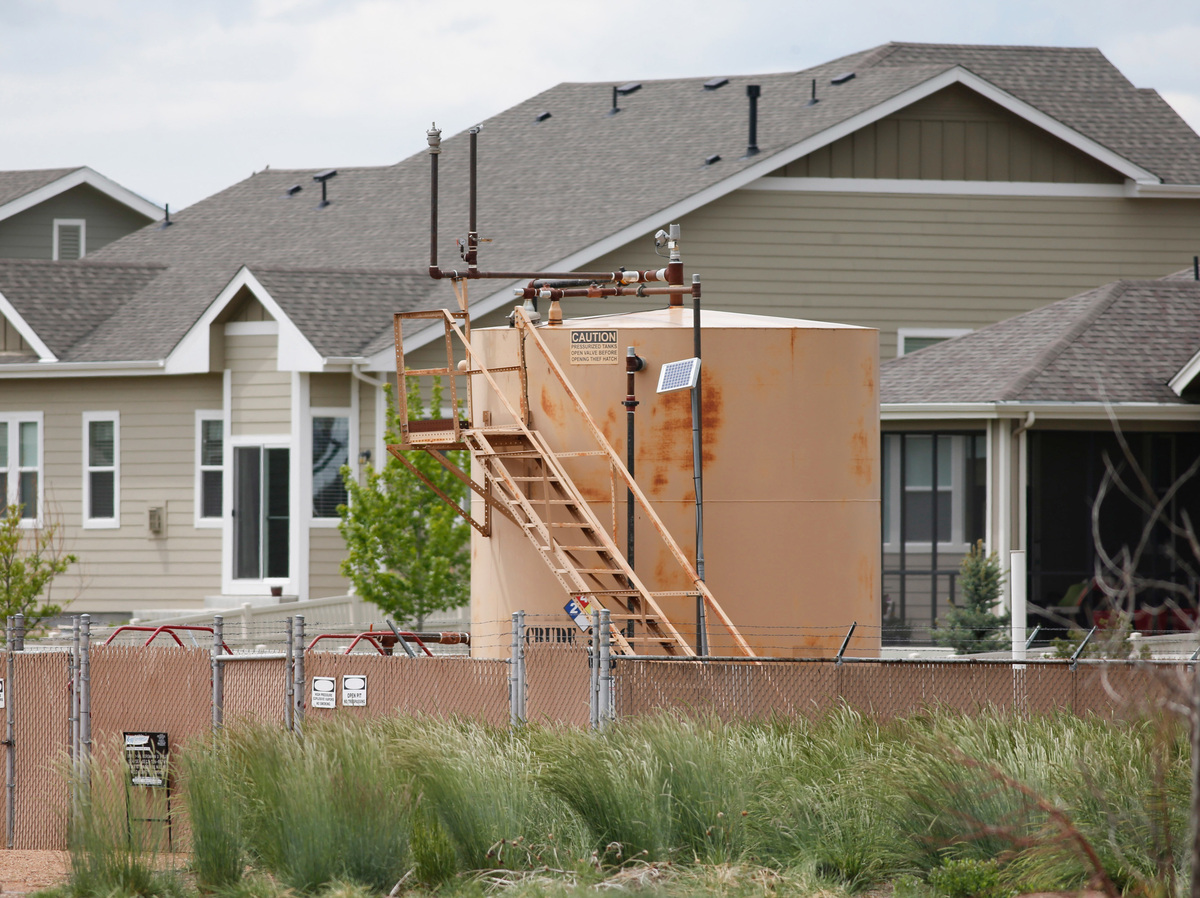 An oil storage tank sits by a housing development off state highway 119 near Firestone, Colo.

Inside Energy, a public media project, found that since 2013, on Colorado's Northern Front Range, there are at least 220 new wells within 500 feet of homes.

In the absence of state action, some towns are trying to pass their own setbacks. That is what Broomfield, Colo., is hoping to do before operations on a large oil and gas proposal get underway. Extraction Oil and Gas wants to put in 99 wells on four pads, close to a retirement community and a proposed school and reservoir.

Broomfield Mayor Randy Ahrens is supporting a setback of a quarter mile, in part, because he witnessed several accidents at sites while working in the oilfield in the 1980s. When people ask Ahrens why safety is so important to him, he takes out his phone and shows them a picture of a site in Coleman, Texas, engulfed in flames – a well blowout.

"A unit lost control and the flames are about 150 foot high in the air," Ahrens says.

Broomfield had actually considered banning new oil and gas development but voluntarily dropped those plans this spring, in part, because of fears of a potentially messy and expensive legal battle. Instead, the town formed a task force to try and deal with issues, like setbacks, directly.

Can people co-exist with oil and gas?

This tension between residents and oil and gas development existed long before it came to Broomfield.

Matthew Fry, a geographer at the University of North Texas, says he even has a jogging route based on the seven or eight wells he passes along the way. "My wife will say 'where did you run today?' I'll say I did the gas well route," he says. 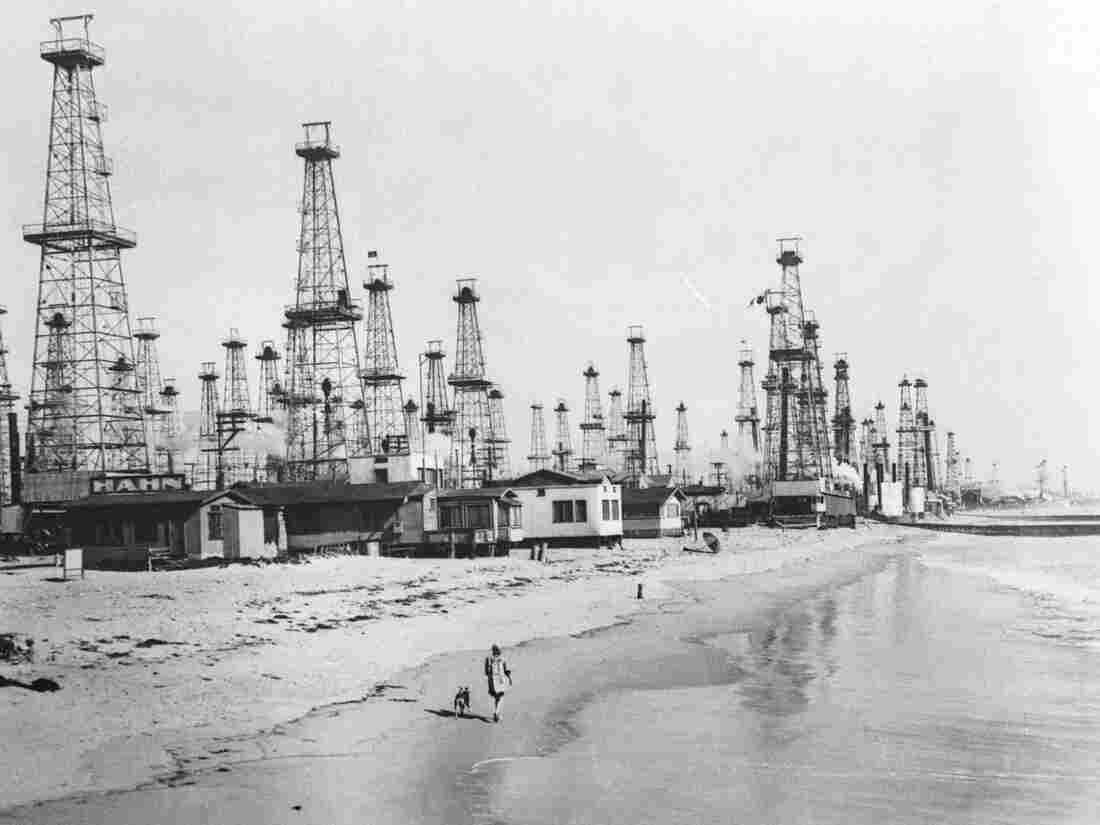 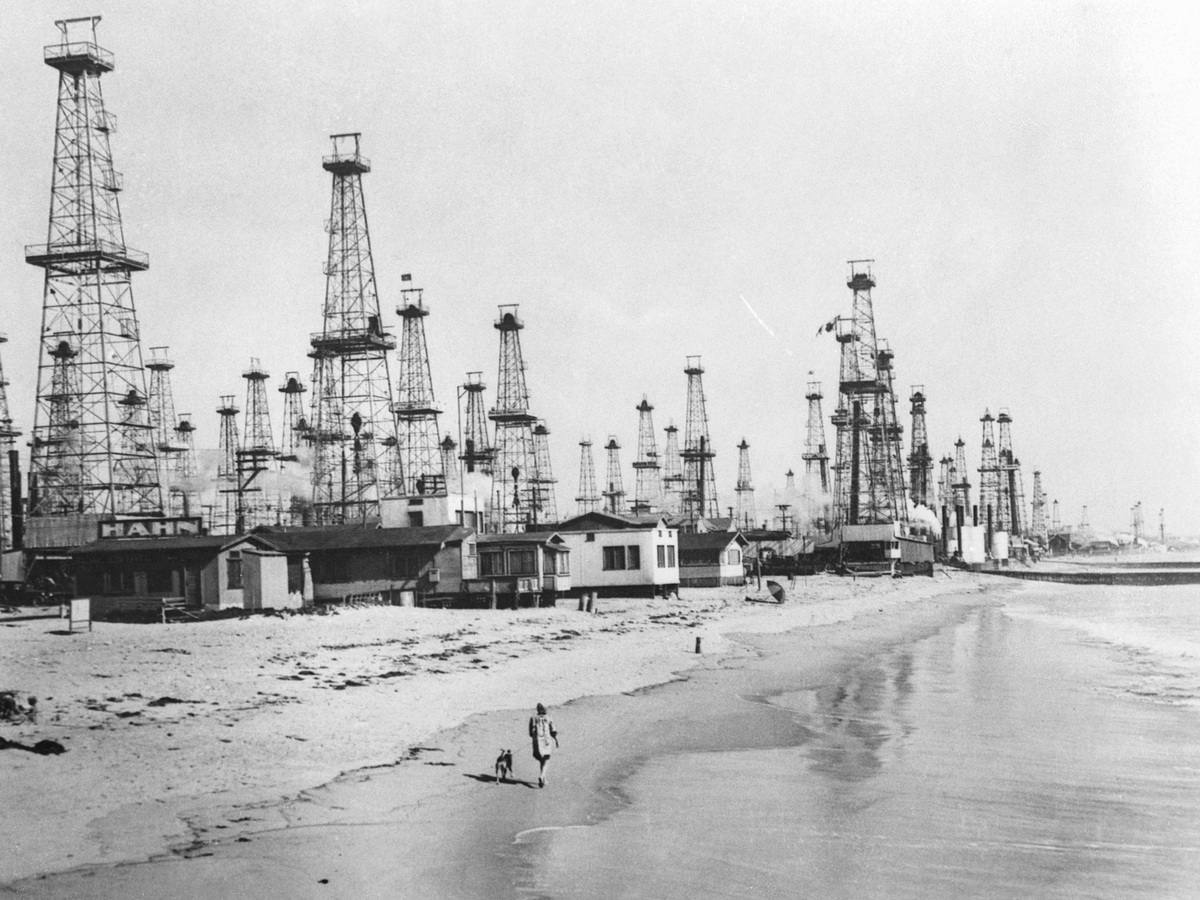 Oil derricks stand tall on a beach in Venice, Calif., in the 1920s.

Fry's research focuses on the intersection of oil and gas and communities. He says this kind of uncomfortably close development is not new. Think of oil derricks lining beaches in Los Angeles or dotting Oklahoma City's 1930s skyline.

But Fry says that these days, drilling that happens near people is more suburban than urban.

Suburban drilling is growing, especially in Northern Colorado. Advances in drilling technology have allowed energy companies to access previously untapped reserves, some of which happen to run underneath towns north of Denver, like Broomfield, where Extraction Oil and Gas is hoping to drill 99 wells over the course of a year or so.

Broomfield's oil and gas task force has put thousands of hours into drafting new town rules, trying to have proposals finalized before drilling starts. They have gathered baseline data on air quality and analyzed regulations from other municipalities. The draft rules include recommendations like air and water monitoring, a larger minimum distance between homes and drilling and disclosure of all chemicals that could be brought on site

Broomfield Aims To Co-Exist With Oil And Gas Development

"If they understand the preeminence of health safety and welfare, they might have an easier time getting what they want," says Susan Phillips Speece, a member of the task force.

Extraction is also planning measures to address health and safety, and even noise and sigh of its proposed operations.

"Things like electric rigs which we introduced to this basin. The sound walls that you see," says Brian Cain, Extraction's head of public affairs, as he showed off the various mitigation measures in the company's plan.

Extraction also has plans to reduce truck traffic, to remove dozens of old oil and gas wells and they plan to use new quieter fracking equipment, developed by Liberty Oilfield Services.

"We understand the need to minimize those inconveniences and impacts to the community," Cain says.

In addition to this new technology, Extraction says it will spend millions on landscaping to mask some of this infrastructure.

In recent financial documents, Extraction warns that costs could go up thanks to all of these urban operations. That, coupled with the need to negotiate with the task force begs the question: why even bother with Broomfield?

"We don't really get to choose where the natural resources are. Everything north of Denver is effectively part of the Denver Julesburg basin," Cain explains.

Now, it's the state of Colorado that has ultimate authority over oil and gas drilling and it has tried to deal with some of the impacts with rules on methane emissions and groundwater testing. But for many in Broomfield, it's not enough.

More and more people are moving to areas in the DJ basin, putting pressure on Colorado lawmakers to deal with certain impacts of drilling early on, sometimes before other states, by passing regulations related to issues like methane emissions and groundwater testing. 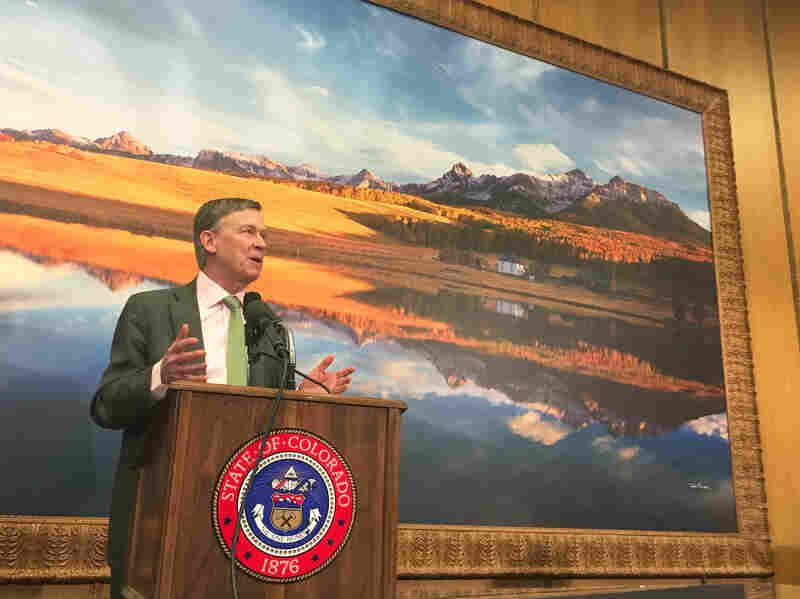 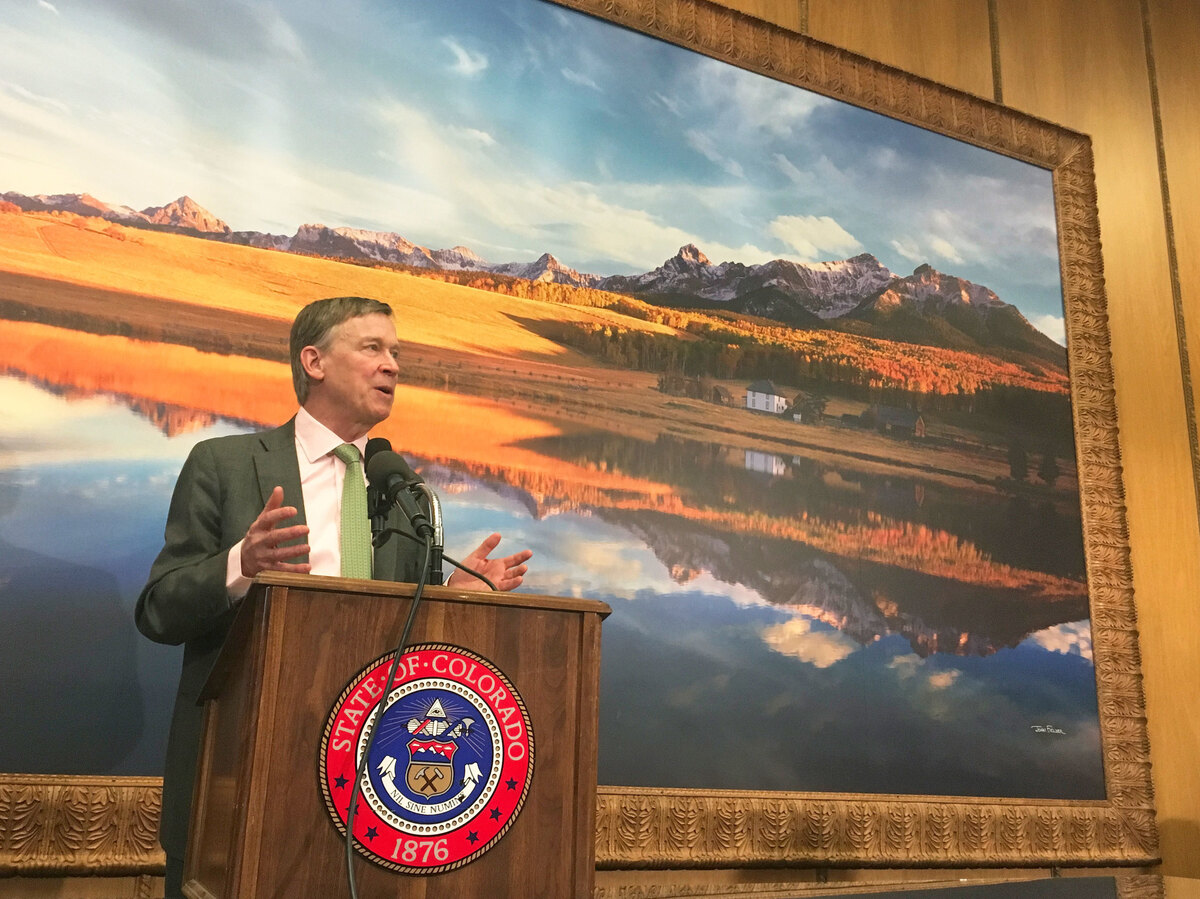 Now Colorado Gov. John Hickenlooper, a Democrat, is proposing even more regulations on the industry. In a press conference on, Aug. 22, he outlined seven new recommendations for the industry and its regulators, that include an increased pressure testing requirement for all oil and gas pipelines, and the creation of a working group to improve safety training.

But some communities want to do more. Speece says Broomfield is taking the lead right now — hoping to become a model for other towns.

Extraction recently weighed in saying that some of Broomfield's draft recommendations are either in conflict with state law or would make drilling totally uneconomical. The City Council will vote next month on these tougher oil and gas regulations. If the state or industry decides that they go to far, Speece says Broomfield is ready to fight in court.

Leigh Paterson is a Colorado-based reporter for Inside Energy, a public media collaboration focused on America's energy issues.