Accessibility links
Subtle, Brilliant 'Stay With Me' Blends The Personal And The Political Ayobami Adebayo's debut novel follows a young Nigerian couple struggling to conceive and caught between modern medicine and the traditional remedies — like a new wife — pushed by older relatives. 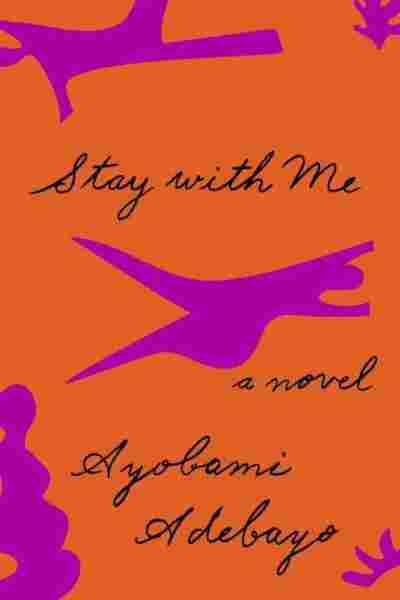 If you lie to save your marriage, does it truly count as a betrayal? This is the question at the heart of Stay With Me, a debut novel about a young couple's infertility, set among the coups and counter-coups of early '90s Nigeria. It's a time when thieves and rapists send polite letters to the neighborhood warning they'll be arriving soon; where the news can coolly announce one head of state in the morning and another by night. And it's a time when smiling relatives can arrive with a second wife and expect the first to prepare lunch for her, presenting the unthinkable under the same polite guise.

As the novel begins, Yejide and Akin, who met in a mutual coup de foudre at university, are finding their marriage sorely tested by their inability to have a child. Pushing the question towards crisis, however, are their older relatives, who drag Yejide to herbalists and Akin towards polygamy to solve the problem.

For his part, Akin, a modern banker who is profoundly in love with his wife, is repulsed by the possible second wives his mother parades through his office. But Yejide — also a modern businesswoman — is herself the daughter of a woman who died giving birth, raised by four cruel stepmothers who rejected her at every turn. She is willing to carry a baby goat up a mountain, to fast herself into the hospital, to please her mother-in-law, the only Moomi she has ever had. Though her husband is indifferent, his Yoruba family is adamant that he has tribal lineage to preserve. To maintain their allegiance, Yejide must "accommodate every new level of indignity."

But a second wife is a bridge too far. As relatives introduce her to Funmi, a furious Yejide fumes, "I expected to hear about a new pastor I could visit; a new mountain where I could go to pray; or an old herbalist in a remote village or town whom I could consult ... What I was not expecting was another smiling woman in the room, a yellow woman with a blood-red mouth who grinned like a new bride."

Akin and Yejide's marriage is a battle within which tradition threatens the couple's own intimacy. Yejide, terrified Funmi will unseat her, develops a false pregnancy, believing woo-woo charlatans over doctors who correctly diagnosis her condition. Terrified he will lose his wife to madness, Akin develops a bold plan to save their family — one which, he later grieves, discounted what would ruin it: "All the mess of love and life that only shows up as you go along."

Adebayo draws a clear parallel between the couple and the country: like Nigeria's middle class, quiescent in the face of political upheaval, Akin and Yejide keep accepting the unthinkable to keep their family intact.

The most subtly brilliant aspect of Stay With Me is how this stunning literary work serves as both astute political commentary and unfolding mystery. Adebayo draws a clear parallel between the couple and the country: like Nigeria's middle class, quiescent in the face of political upheaval, Akin and Yejide keep accepting the unthinkable to keep their family intact. As Yejide and Akin recount the story of their romance, they also reveal the lies and omissions that are destroying them from the inside. "Sometimes faith," Yejide tells us, "is easier than doubt."

This denial is corrosive. Because the reader is also faithful — to Akin and Yejide's stories — we see where we too chose to be blind. "The cost didn't matter," Akin tells us. "At the end of it all was this stretch of happiness that was supposed to begin only after we had children and not before." Only when Akin and Yejide drop that old story are they finally able to have it.