Accessibility links
In Trump World, The Brand Is All, And His Brand Includes The Wall These were the issues that helped catapult Trump in 2016 over 16 rivals with better credentials as Republicans. So no wonder he believes the letters of his own name make a better brand than G-O-P. 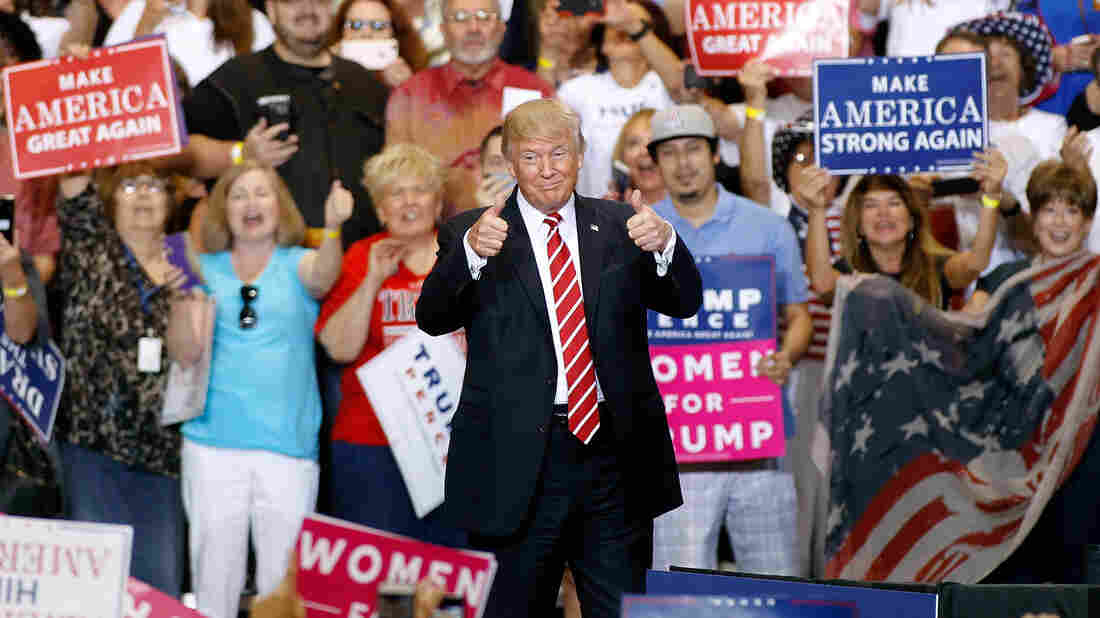 President Trump gives two thumbs-up to a crowd of supporters at the Phoenix Convention Center during a rally this week. Ralph Freso/Getty Images hide caption 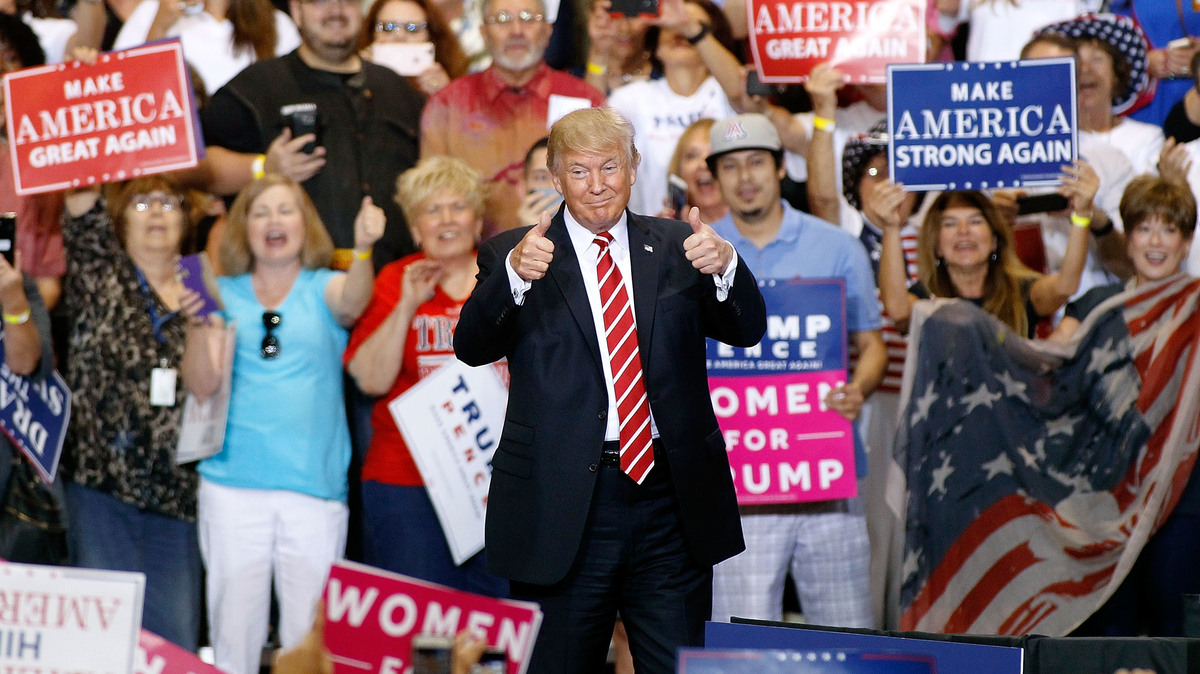 President Trump gives two thumbs-up to a crowd of supporters at the Phoenix Convention Center during a rally this week.

If you picked up a print copy of The New York Times on Friday, you may have noticed something unusual about it — something missing. There were no front-page headlines about President Trump, no pictures of him — not even a little "key" to a story on an inside page.

The name Trump did appear in one story, a profile of John W. Nicholson Jr., the Army general commanding U.S. forces in Afghanistan. The president was necessarily mentioned in that story, but the story was not about the president.

So while not everyone will notice how little Trump there was on the page, rest assured there were those who did. (Likely one in particular.)

The president makes no secret of his obsessive interest in certain media, especially TV and the publications based in New York. He reads the Times as though he worked there. He is known to keep an extensive collection of magazine covers featuring his face.

Of course, it's possible the president overlooked his sudden absence from the Times' front, with its unique power to set agendas elsewhere in journalism. But we still assume others in the White House had to worry about the president's reaction.

In Trump World, being in headlines and on front pages — being featured — is how you happen. Otherwise, you may not exist.

The president rose to prominence largely on the strength of world-class self-promotion. His hotels and other properties are known for the prominence and sheer size of the letters announcing his name.

This is more than a metaphor for self-involvement. Being famous for being famous has been crucial to his brand, even synonymous with it. In estimating his own net worth, Trump has in the past said the ability to lease his name alone should be valued in 10 figures.

He made a fortune in reality TV by exploiting an image and persona created in the tabloids and on shock-jock radio. He prospered in defiance of conventional norms.

When he turned to politics, he brought his fanatical focus on downmarket branding. The issues he could make his own included the debunked "birther" conspiracy about the citizenship of Barack Obama, a ban on Muslim immigrants and refugees, and empathy for anti-vaccine activists.

And, of course, above all, the wall. And making Mexico pay for it.

These were the issues that helped catapult Trump in 2016 over 16 rivals with better credentials as Republicans. So no wonder he believes the letters of his own name make a better brand than G-O-P.

We recall the Trump presidential candidacy in part as a parade of products bearing his name. He announced his candidacy from Trump Tower, treated his Washington hotel as a waiting room for the White House, peddled his steaks and bottled water, and promoted his for-profit "university" (even in bankruptcy).

In much the same way, he had his branded issues that mattered to him and his voters. And that helped him overwhelm 16 intraparty rivals with media presence and his performance in televised debates.

The "Never Trump" movement never got off the ground. Nearly every Republican who mattered agreed to bend the knee. They wanted the White House, they wanted to beat Hillary Clinton. They needed to maintain turnout among conservatives as well as rank-and-file Republicans in order to hold the House and Senate and a raft of state-level offices as well.

All that is true. But it is also true that Republicans expected to get something in return — something beyond victory parties on election night. They expected Trump to meet them in the middle, or at least move in their direction.

Instead, Trump has shown an undiminished determination to go his own way, to be his own man with his own brand and his own issue priorities.

He followed his own compass in responding to the violence in Charlottesville, Va.

He went to Arizona and scorched both of its Republican senators.

He took to Twitter to bushwhack his own party's leaders in the House and Senate on the eve of a difficult month of fiscal negotiations to keep the federal government operating. ("It should have been easy," said the president, "now a mess!")

Trump has now decided his own bottom line for September is not so much a functioning government or a responsible Republican majority as it is a win for his border wall.

No promise that he made to his primary voters, his November voters or the people who crowd into his rallies even now mattered more then or matters more now than the imagined wall from the Pacific to the Gulf of Mexico. It is the solid realization of the dream of "America First."

"If we have to shut this government down, we are going to build that wall," Trump told his ecstatic crowd in Phoenix.

Of course, House Speaker Paul Ryan and Senate Majority Leader Mitch McConnell have shown no interest in the wall. Rather, both care about the nation's fiscal housekeeping — the budget, the debt ceiling, the annual spending process.

In the struggles of September, we shall see which brand the Republican Congress will wear.