Accessibility links
'If The Creek Don't Rise' Traces Webs Of Hurt And Help Leah Weiss' debut novel — set in a remote Appalachian town — has a strong sense of place and a richly drawn cast of characters, all with their own voices, stories and interconnected relationships.

'If The Creek Don't Rise' Traces Webs Of Hurt And Help

'If The Creek Don't Rise' Traces Webs Of Hurt And Help 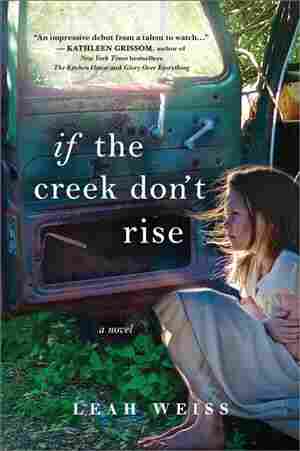 If the Creek Don't Rise

Only 15 days into her marriage to Roy Tupkin and Sadie Blue is already regretting it. Baby or no baby, she never should have married a man who beats her for no reason other than singing along to the Loretta Lynn song she loves — and that's not even the worst of it. But Sadie Blue is not the first or the last woman in Baines Creek to deal with a no-good husband. If The Creek Don't Rise, by debut novelist Leah Weiss, paints a fascinating, gripping portrait of the interconnected and often unseen ways people help each other get by in this remote Appalachian town.

Like her granddaughter Sadie Blue, Gladys also had one hell of a husband (but she ... did something about her Walter). And then there's her neighbor Marris who's always dropping by help with a pie or the dishes or unexpected cleanups. Together, these two women know they can't force Sadie Blue to quit her marriage, but they let her know she'll have a place to turn to.

It's the arrival of Kate Shaw, the new teacher from down in the valley, that gives Sadie Blue an idea that there's "a special life" for her that doesn't involve Roy — or maybe it's something darker, maybe it's the disappearance of the mysterious Darlene. After all, everybody knows that no-good Roy and his "shadow" Billy Barnhill had something to do with that girl vanishing.

Weiss steadily builds the tension to an ending you knew was coming — and, let's be honest, probably hoped for — yet it still arrives as a sudden, powerful shock.

The very real threat of danger to all these women — Sadie and Kate, especially — is like a black cloud hovering over the story. Surly and distant Prudence Perkins, sister to the town preacher, thinks: "Even being four, I wondered who defended us girls. I was too shy back then to ask. Now I know — it's nobody." But it's not always nobody. It's women like Marris or teacher Kate, or preacher Eli Perkins, who is relentlessly dedicated to serving his neighbors, especially Sadie: "I've been planting seeds a long time to help her believe in herself," he says at one point. And it's "crazy" old Birdie Rocas, who knows the healing power of the plants and other secrets of the mountain.

In Baines Creek, it's the women who don't have that network of support who run into real trouble — the missing girl, Darlene, or the mothers of bad boys Billy and Roy, whose tough and unforgiving circumstances, we're given to understand, turned these boys into men who can't love even when it comes to a girl like Sadie Blue. Or Gladys.

While If The Creek Don't Rise is Sadie Blue's story, Weiss tells it through the perspectives of those who help — or hurt — her, delving deeply into each character's point of view and backstory and creating a different, perfect voice for each character. Layer upon layer of perspective reveals what happens to Darlene and Sadie Blue, and provides an immersive and deeply emotional reading experience — especially satisfying for readers who love richly drawn characters and a strong sense of place.

Weiss steadily builds the tension to an ending you knew was coming — and, let's be honest, probably hoped for — yet it still arrives as a sudden, powerful shock. It's a shock that lingers, leaving you thinking about what it means to be a strong woman — and what it means to escape.