Accessibility links
Kinan Azmeh Brings The Magic Of Music To Summer Camp For Refugee Children The acclaimed Syrian clarinetist has performed all over the world, but recently played before a different type of international audience: refugee children at a summer camp in New Jersey. 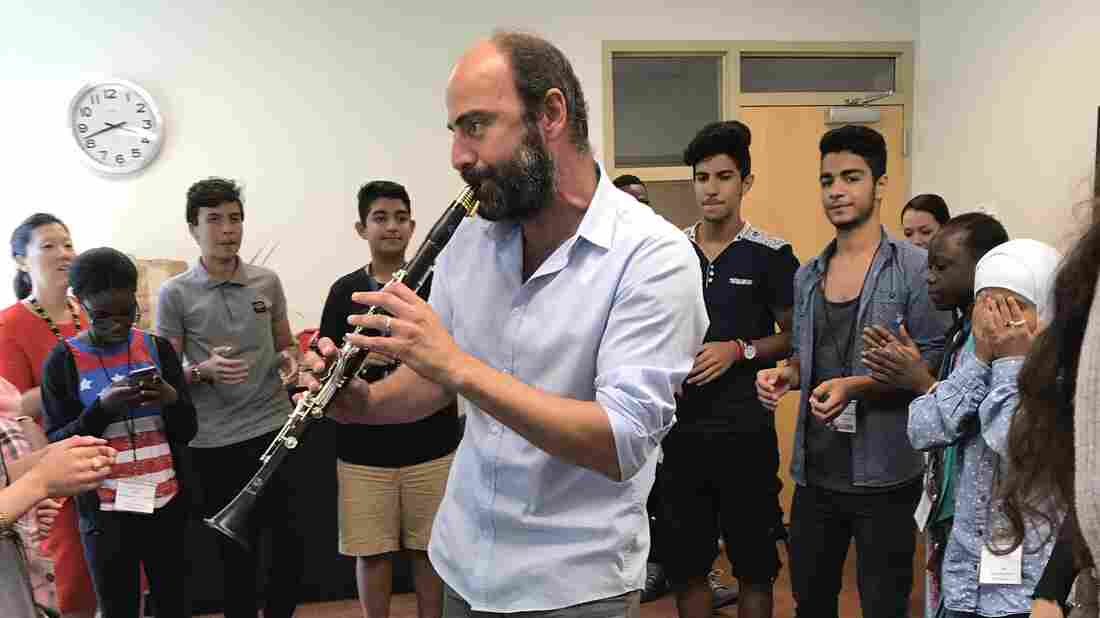 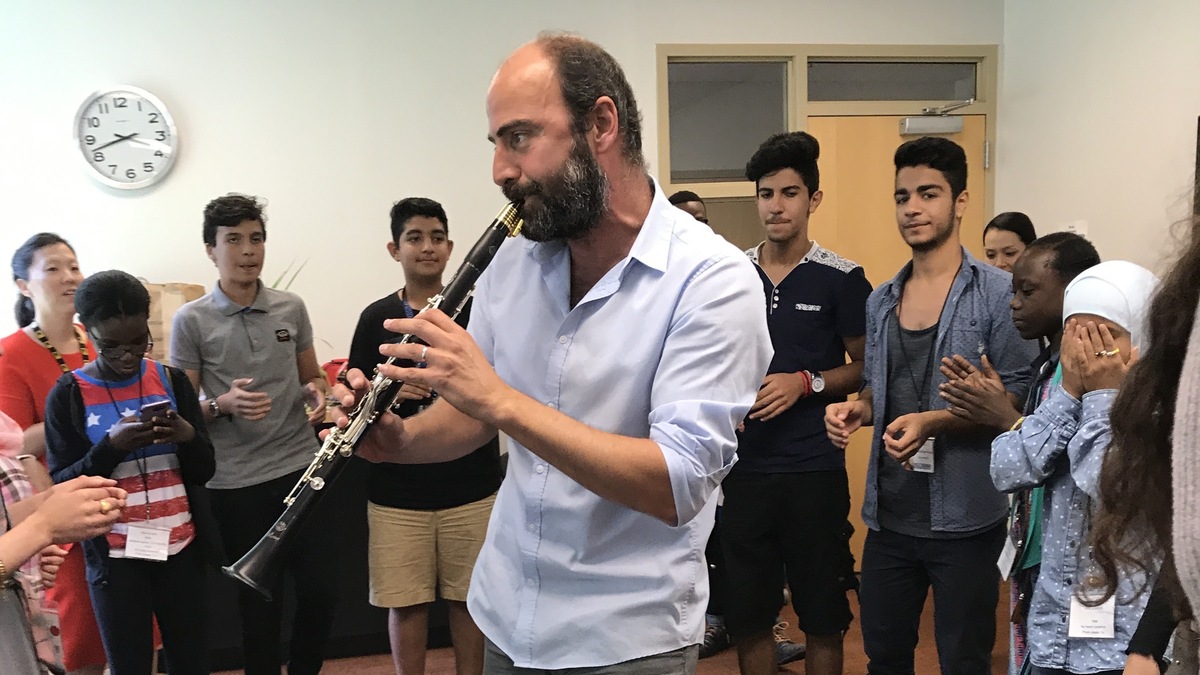 In Union, New Jersey, celebrated musician and composer Kinan Azmeh is playing for his toughest audience yet: a gaggle of refugee children, five to ten years old and newly resettled in the United States.

Born in Damascus, Syria and a graduate of New York's Juilliard School, Azmeh is a Grammy award-winning musician and member of Yo-Yo Ma's Silk Road Ensemble. This summer, he has partnered with the International Rescue Committee's Refugee Youth Summer Academy. It's the Academy's second year, and Azmeh volunteered to lead music workshops.

The program immerses young refugees in American culture, and holds classes to sharpen their English skills. The children are primarily from Syria, Iraq, Afghanistan, Congo and Sudan, and have been resettled for less than a year. There are more than 70 children in the three-week course; the majority of them are between five and twelve years old.

Azmeh brings them music: a language all of the refugees understand. For the youngest in the group, he promises them even more as he opens his clarinet case.

"I tell them there is some magic in the box," he says.

He crouches down to play at their eye level and plays as they squeal with surprise. He allows the most curious to touch the bell of the horn to feel the air that makes the rich sounds.

"I remember when I was a little kid, when somebody is playing an instrument and you want to be physically connected to it, you want to touch the magic," says Azmeh.

Azmeh volunteered, he says, because he understands the hard journey these kids have been on as they've been uprooted from home.

In January, Azmeh was on similarly shaky ground. While he was on a European tour with cellist Yo-Yo Ma, an executive order from President Trump banned all Syrians — as well as citizens of six other majority Muslim countries — from entering the U.S., even if they had legal visas. Azmeh has lived in the U.S. for more than a decade. He has an EB-1 visa, classifying him as an "alien with extraordinary abilities." In the days following the President's signature, Azmeh didn't know if he would be able to fly home to his New York apartment.

"It gave me perspective: What does it mean for other people?" he says, referring to the dramatic migration crisis with millions forcibly displaced.

"You know, you can always feel emotionally shaken by something," he says. "For me, I immediately thought: What can I do?"

One thing he did was record an album, Songs For Days To Come, commissioned and recorded by St. Urban, an organization that promotes chamber music in New York and donated 50 percent of the proceeds to the New Jersey Refugee Academy. The album collaboration led Azmeh, and Lenore Davis, who heads St. Urban, to work together on a day of music for these newly arrived refugee kids who come to the Academy to get ready for American classrooms in the fall.

Many have missed years of school due to war and violence back home. Over the weeks at the Academy, they get to practice their English and learn other basic skills. 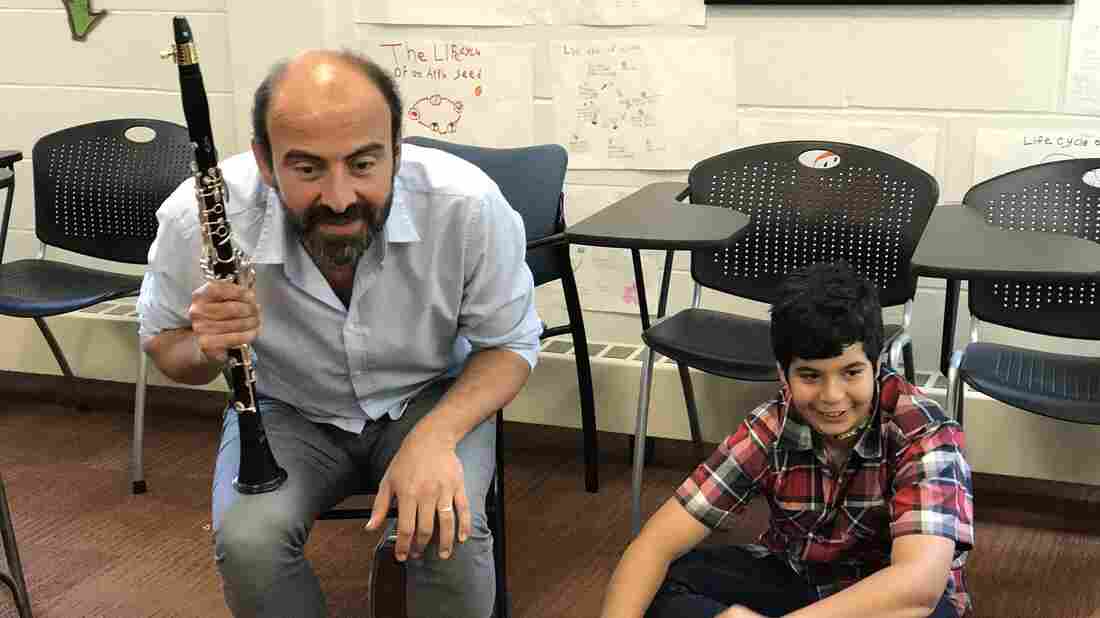 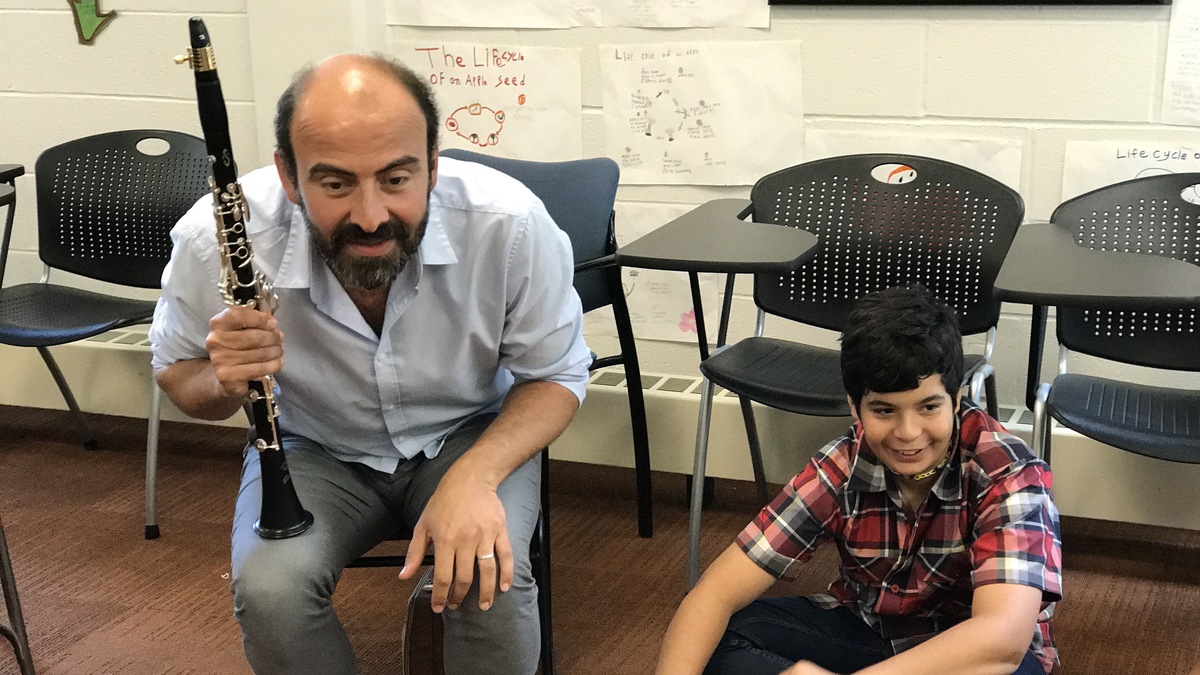 "Just those things that seem so simple, like bringing your backpack every day, and learning how to sit and keep your hands to yourself," says Megan Bergert, the IRC's Youth Coordinator.

The kids also attend yoga classes and drama therapy to help them overcome war trauma and grapple with the rise of anti-Muslim, anti-immigrant sentiments in their new country. Even the youngest students here feel it, says Bergert.

"They feel those things in their bodies," she explains. She adds that the children feel the tension through their parents at home, too. "They come in and we see it on their faces," she says, "because they are feeling it as a physical experience."

Azmeh's music workshop offers a break from the pressure to quickly adjust to a new country and culture.

In an afternoon session, he prompts a circle of high school-age refugees to sing songs from home and tap out rhythms as he plays the clarinet and his wife, concert violinist Layale Chaker, improvise an intimate concert.

Abdullah Mahmoud, a 16-year-old from Iraq, beams as he claps his hands and sings alongside his new friends from summer camp. He was resettled nine months ago with his parents, and has already learned a lot about his new country.

"I'm not worried about the Muslim thing," he says in clear English, "because I read every person in the United States has freedom of religion and freedom of speech."

Azmeh says music is also about freedom: the freedom to express your emotions. It's a gift he leaves for these refugee kids. They swarm him for selfies to remember their first American summer camp.