Accessibility links
Texas Becoming A Magnet For Conservatives Fleeing Liberal States Like California Some California conservatives are setting out to create their own idyllic communities in Texas — neighborhoods that espouse conservative Christian values and politics. Liberals need not apply. 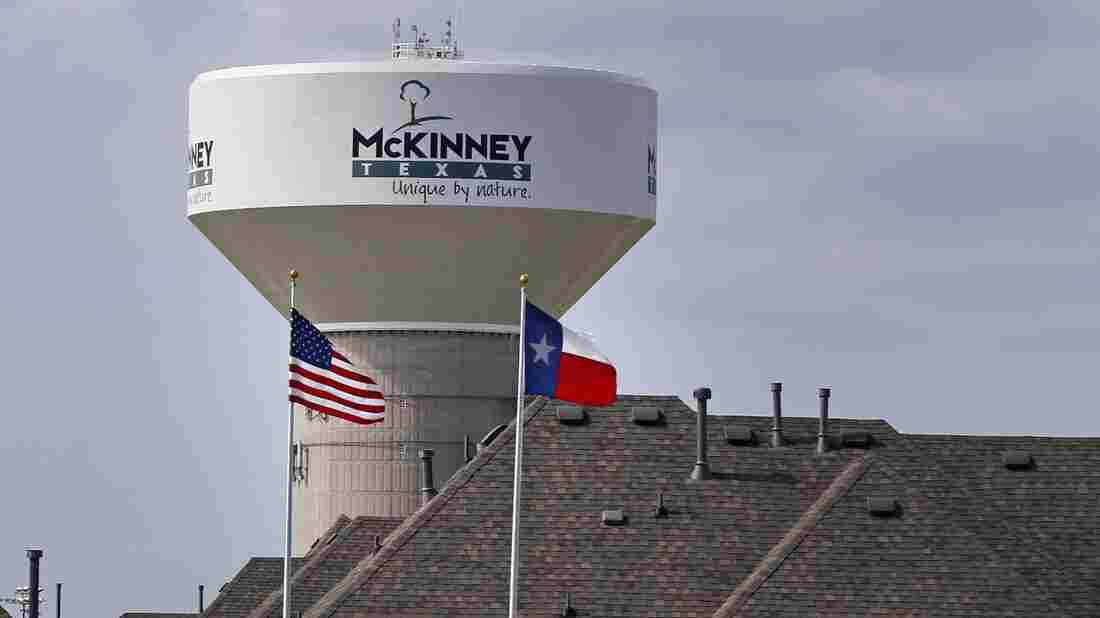 A water tower with a city slogan painted across it is seen behind a housing area in McKinney, Texas, in 2015. Ron Jenkins/AP hide caption 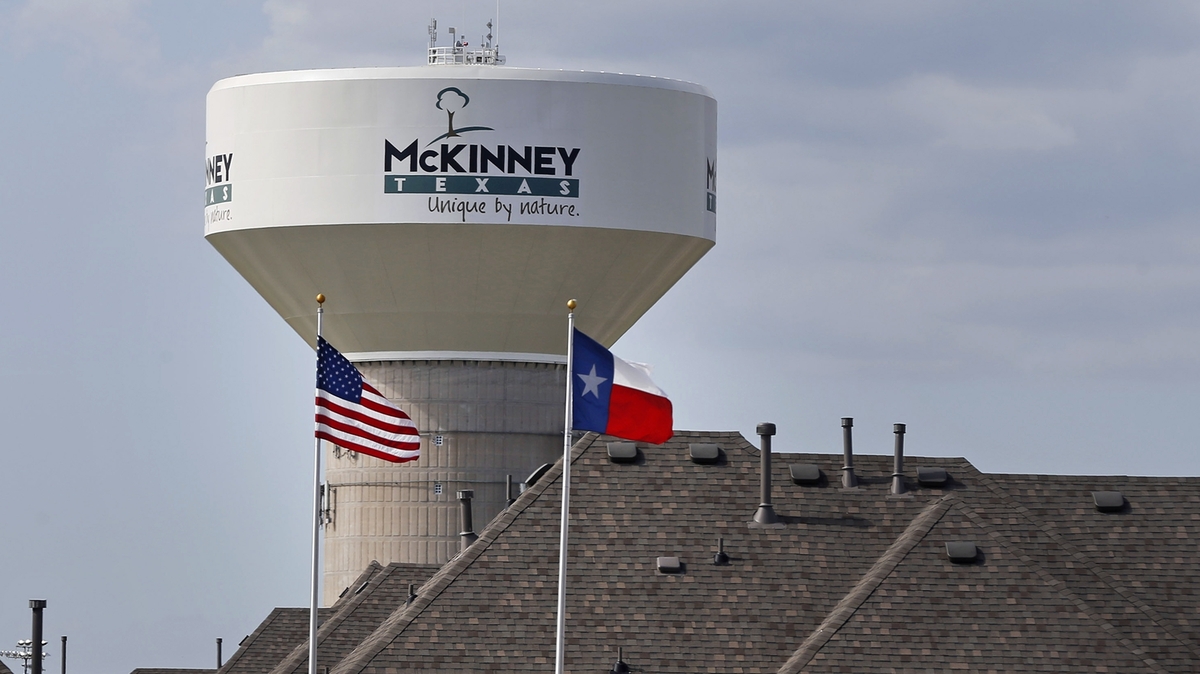 A water tower with a city slogan painted across it is seen behind a housing area in McKinney, Texas, in 2015.

There are no cardboard boxes or bubble wrap or heavy duty packing tape in Tim Stokes' 1,600-square-foot Sacramento, Calif., home. But, according to the 36-year-old, he and his pregnant wife, their three kids and their two 100-pound mastiffs are on the verge of selling the house they bought just over a year ago.

Though Stokes was born in Nevada, he has spent all but the first six months of his life in California. For most of that time, any move away from his hometown and family would have been unthinkable for him. But in the past six years, Stokes, who is a Republican, said the political climate and the seemingly unstoppable swing further to the left in California have become unbearable.

"It's the simple fact that I'm trying to raise a family," he said, before adding that he's tired of feeling like an outsider in his hometown.

He is a regular voter and in recent years has voted against a long list of proposals. He opposed a hike in gas taxes, the legalization of marijuana and Proposition 57, which allows the early release of some nonviolent offenders from prison in order to alleviate overcrowding. They all passed.

It is these types of unrelenting political blows, he said, that have left him feeling thwarted and outnumbered. And it is the reason behind the family's imminent move to Texas, a state where he believes he will finally be surrounded by people who share his conservative values.

That would make the family of five (almost six) part of a massive wave of Californians migrating to Texas. In fact, by some estimates there will be another 20 million people moving there by 2050.

Stokes said he'll be making the move across with the help of a company called Conservative Move whose tag line is "Helping families move Right."

Founder Paul Chabot, 42, started the company in May after making the move from San Bernadino, Calif., to McKinney, Texas, with his own family. Chabot, a Republican, had recently endured a second failed run for Congress.

Following the defeat, he and his wife concluded that their home state is controlled by what he referred to as an ultra-far-left ideology. "And that left ideology in California are largely wealthy liberal coastal elites that I believe controlled most of California through politics and fundraising and policies, hands down," he said. But, he added, "when you get to the inland part of these states — the Inland Empire, the Central Valley — these are areas where you have working poor people that are living largely impoverished and forgotten."

The company was launched in May and already, he claimed, 2,000 families have asked for his help. It's been an easy sell, he said laughing, because Republicans like Stokes — who are trapped in liberal states — are desperate to leave.

"It's because of liberal laws that have basically destroyed the infrastructure or the region," he said.

It is also helpful that the local economies and job markets in Texas, especially northern Texas, are booming. And, when compared to home prices in big, blue urban areas, the housing is remarkably affordable.

When asked to describe what the company does exactly, Chabot said, "Our primary job is to help families living in more blue states relocate to red states." In practice, he collects a commission from the buying and selling of homes.

Chabot's goal is to establish a series of communities, primarily in North Texas, where entire neighborhoods are populated by conservative Republicans. In a way, what Chabot said he is offering is a chance to step into a time machine.

"I jokingly say North Texas out here reminds me of Orange County, California, in the 1980s," he said.

When pushed to consider if there are any downsides to what he's doing — encouraging people to stick with their own kind, discouraging them from having neighbors with different points of view — Chabot claimed what he is after is just "a strong sense of community where you feel really good about the people that are around you because they somehow — you just mentally connect with what it is that they want."

Fuller is a real estate developer and the mayor of McKinney, Texas, which is in the Dallas-Fort Worth area — where Chabot lives, has based his company and is luring people to move.

While Chabot is trying to create communities around a certain set of conservative values, George Fuller is actually creating bricks and mortar communities. He is about to open a 46-acre multi-purpose project.

Tech Creates Our Political Echo Chambers. It Might Also Be A Solution

Although Fuller is also a conservative Republican, he said, at its core, the desire to self-segregate can be dangerous.

With the violence of Charlottesville, Va., weighing heavily on his mind, the newly elected mayor acknowledged that Americans have been choosing to "live in bubbles" for decades but he insisted it can leave people out of practice when confronting a person with a different point of view.

His suggestion: "I think instead of just trying to kind of put together pockets of like-minded, I would think energy is better spent trying to figure out how to live and exist together and find productive solutions going forward versus insulating yourself from different thoughts and ideologies."

And, he argues, Chabot's dream is probably short-lived given the influx of newcomers to Texas. Yes, many may be conservatives seeking refuge in a conservative state, but it's just as likely many are liberals moving for reasons unrelated to politics. Yet, once they arrive in the red-voting state, their progressive views will have some influence on politics and legislation.

As evidence, he points to the results of the 2016 presidential election in the state. Forty-three percent of Texans voted for Hillary Clinton.

So, Fuller cautions all conservative movers to temper their expectations: The Lone Star State might get more blue.