Accessibility links
Hope Hicks Is A Trump Team 'Survivor' And Now Interim Communications Director In an administration where it seems like everyone becomes an instant celebrity, Hicks has kept her head down, working hard at maintaining a low profile. 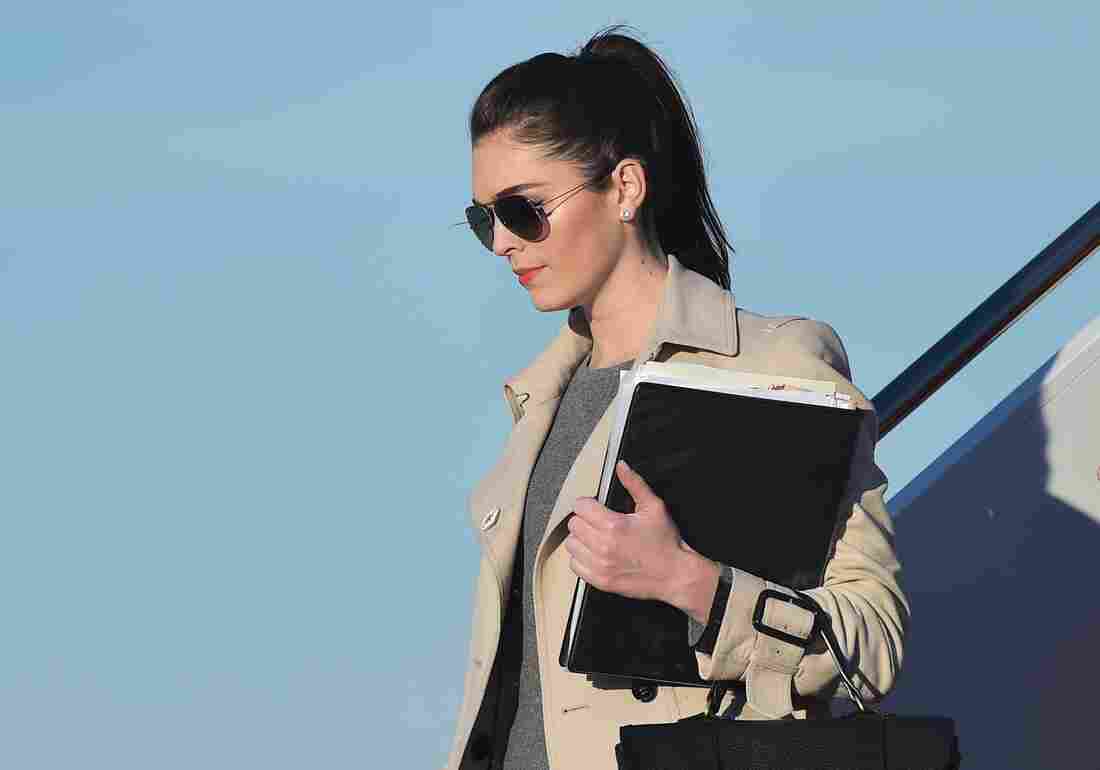 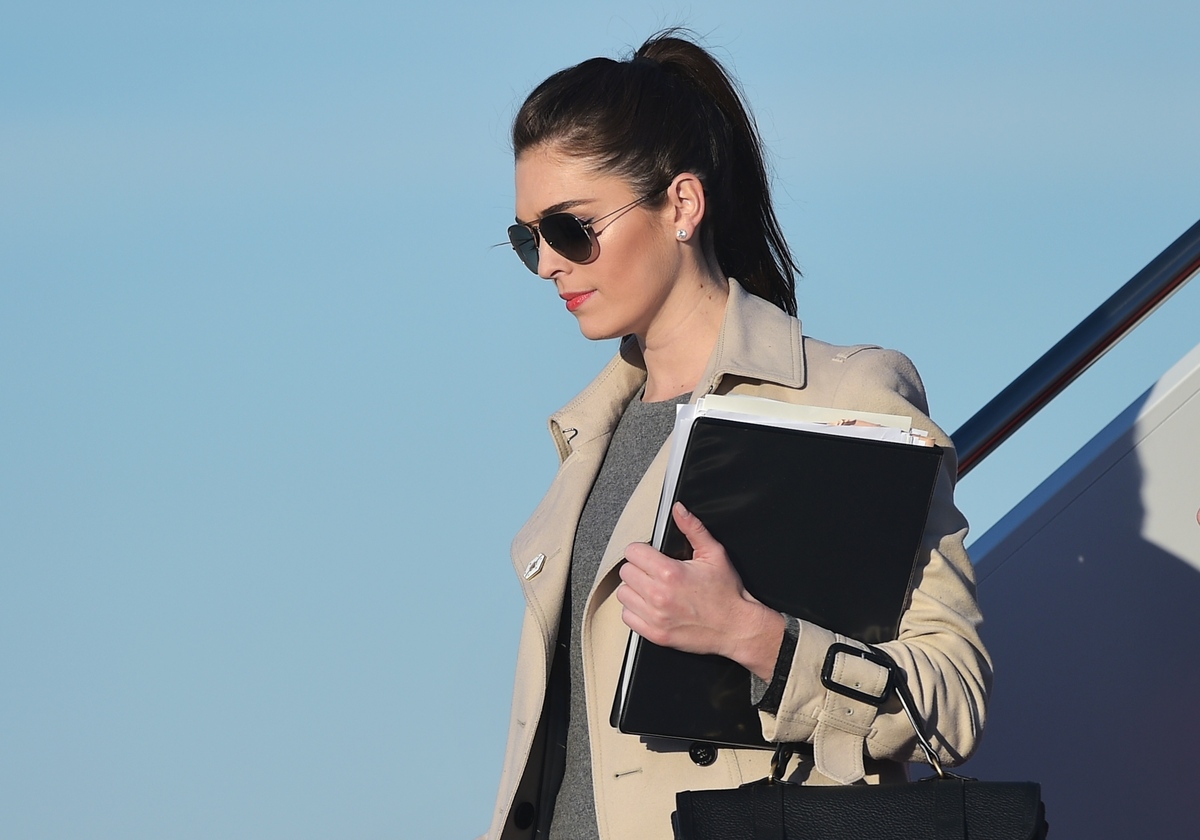 Hope Hicks steps off Air Force One on Feb. 6 at Andrews Air Force Base in Maryland.

If you Google interim White House communications director Hope Hicks, you'll find plenty of articles referencing her youth (she's 28), her time as a model and her work in corporate public relations for Ivanka Trump's brand.

But people who know her say if that's all you hear, you'll conjure up an incomplete image of Hicks.

"They say, 'Well, Hope is so beautiful. She's a model, that's the only reason Donald Trump hired [her]' — it's not true at all," says Sam Nunberg, an adviser to President Trump from 2011 to mid-2015. "Anybody who underestimates her is making a big mistake."

When approached by NPR for this story, Hicks politely declined to be interviewed. And that's her MO. In an administration where it seems as though everyone becomes an instant celebrity, Hicks has kept her head down, working hard at maintaining a low profile.

"I think it's a skill ... to avoid being in the press," says Dana Perino, who served as White House press secretary during the George W. Bush administration. She says she has been admiring Hicks from afar.

"She is a true communications professional in that she doesn't seek the limelight," Perino says.

This comes in stark contrast to the man who immediately preceded Hicks in the communications director role, Anthony Scaramucci, whose stunning and profane New Yorker interview caused him to flame out in just 10 days.

Hicks didn't always shy away from attention. She grew up in Greenwich, Conn. According to a profile in her hometown Greenwich Magazine, in 2002, Hicks and her older sister Mary Grace landed a modeling gig for Ralph Lauren. It wasn't long before they were featured in Vanity Fair and Vogue. The Ford Modeling Agency quickly scooped up the Hicks girls and signed them to two-year contracts, leading to Hicks getting appearances on television commercials and the popular soap opera Guiding Light. She also became the face of the preteen book series The Hourglass Adventures, by Barbara Robertson.

Her modeling career ended before college. And her lacrosse coach at Southern Methodist University in Dallas, Liz Holmes, says Hicks never mentioned it.

"Her drive and determination and love of the sport really helped kick things off. ... She helped me institute the culture of grace and good sportsmanship ... all while being really good at lacrosse," Holmes says.

But when it came to the limelight, Holmes says, she had to push Hicks.

According to Holmes, Hicks would much rather feed the ball to her teammates and let them get the glory of scoring. "I said I need you to score more. ... I need you to be shooting 10 times a game," Holmes says.

When pressed, Hicks begrudgingly said she would try to score herself, since that's what her coach wanted.

"She'll do whatever her team requires her to do," Holmes says. "She'll do it well, she'll do it happily and she'll never complain."

After college, Hicks went to work for Hiltzik Strategies, a communications and consulting firm in New York. Matthew Hiltzik, the CEO, says Hicks understood that her role was all about the client.

"It's not about bringing attention to yourself; it's about getting the job done," Hiltzik says. "And in the case of being in the communication space, it's being able to be respected and appreciated by all the parties who are involved."

It could have been in her blood. Hicks grew up in a family of high-powered communications professionals. There's a political connection, too. Her father, Paul Hicks, met her mother, Caye, while they were both working on Capitol Hill as legislative aides — him to Connecticut Republican Rep. Stewart B. McKinney and her to Tennessee Democratic Rep. Ed Jones.

One of her clients she impressed was none other than Ivanka Trump. In October 2014, Hicks was hired away from Hiltzik by the Trump Organization to primarily work with Ivanka. 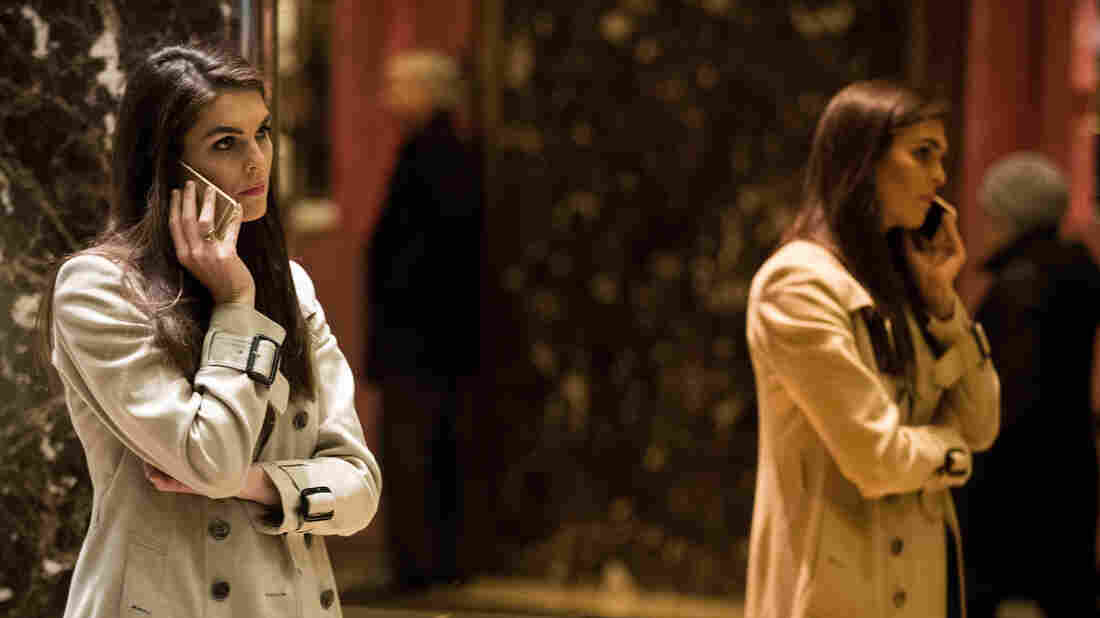 Hope Hicks talks on her phone in the lobby at Trump Tower on December 2016. Her professional style stands in stark contrast to the man who immediately preceded her as communications director, Anthony Scaramucci. Drew Angerer/Getty Images hide caption 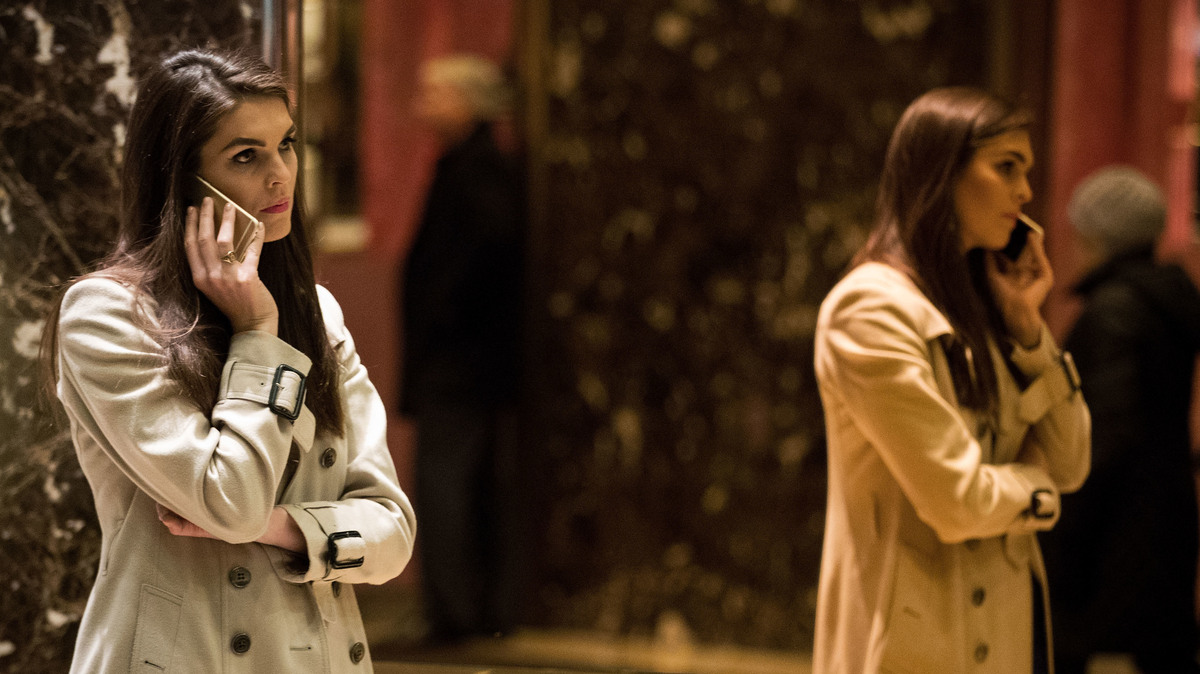 Hope Hicks talks on her phone in the lobby at Trump Tower on December 2016. Her professional style stands in stark contrast to the man who immediately preceded her as communications director, Anthony Scaramucci.

Nunberg met Hicks when he was going to the South Carolina Tea Party convention with Trump in January 2015. He says even then Hicks showed a knack for politics and messaging.

At the time, Hicks wasn't only working on the exploratory phase of a presidential campaign for then-Mr. Trump; she was also working on the opening of a Trump golf course in Brooklyn, N.Y., and on events at Mar-a-Lago and in Miami.

And from the very beginning, Nunberg says, Hicks believed Trump would win the White House.

"And she said to me that people in the primary states were going to view him as a president because they watched him on The Apprentice. Which was true."

When Nunberg was pushed out of the campaign, he and Hicks weren't on the best of terms. But he respects her.

"I mean this in a positive way: She's a corporate shark," Nunberg says.

"Let's go back — January 2015. She's sitting in a room with Michael Cohen, Corey Lewandowski and me. You see any of those people in the White House besides her?" Nunberg asks.

"She is a survivor. And she'll be with him to the very end."

One of the ways she has survived — even thrived — in Trump's orbit is by putting Trump first and not allowing herself to become the story.

Until now, her role in the White House has been that of the ultimate gatekeeper. She arranges interviews with the president, and some of them can become explosive.

For example, a mid-July interview with The New York Times produced days of problematic headlines and fueled speculation about whether Attorney General Jeff Sessions should resign. According to the Times, Hicks was the only White House aide in the room.

Perino says there was probably a better way to handle it.

"I can imagine what happened — that he said, 'Get them in here,' " Perino says of the Times reporters.

"I think that there's just one way to accommodate a president — by saying, 'OK, we'll get them in here. But you've got to give me 15 minutes because I need to just let the chief of staff and press secretary and communications director know you're doing it.' ... That doesn't mean he wouldn't have done the interview. It just means that other people wouldn't have felt blindsided by it."

But any blowback Hicks got for that interview didn't stop her from being named interim communications director.

As improbable as her rise has seemed, it may have been in the cards all along.

In the 2002 Greenwich Magazine profile, a teenage Hicks reflected on her aspirations.

"I'm not ready to decide if modeling is what I want to do with my life. I'm having so much fun, I'm just going to go where it takes me. But I want to continue with the acting," Hicks said.

"I'm also interested in politics — it runs in the family, my parents met while they were working on Capitol Hill. ... If the acting thing doesn't work out, I could really see myself in politics. Who knows?"

In a previous version of this story, Sam Nunberg was quoted as calling the president a magnet. He actually said magnate.