Accessibility links
'My Absolute Darling' Is Hard To Read, Harder To Put Down Gabriel Tallent's devastating debut novel about a young girl and her abusive but charismatic father has memorable characters, the pacing of a thriller, and still manages to work in some light moments.

'My Absolute Darling' Is Hard To Read, Harder To Put Down

'My Absolute Darling' Is Hard To Read, Harder To Put Down 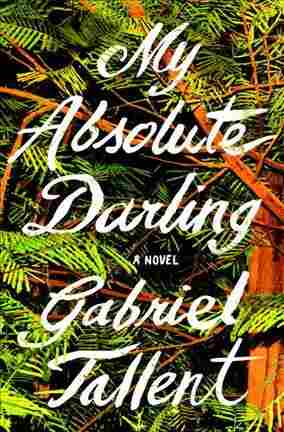 Just a few pages into My Absolute Darling, Martin Alveston quizzes his 14-year-old daughter, Turtle, on her vocabulary; it's a subject the young girl is having considerable trouble with at her middle school. Frustrated by his daughter's progress, Martin tosses her notebook across the room, and places a semiautomatic pistol in front of her. He holds a playing card in his hand, daring her to shoot it. "You're being a little b----," he says. "Are you trying to be a little b----, kibble?"

It's our first indication that something's wrong in the Alveston house, and it only gets much, much worse from there. Gabriel Tallent's My Absolute Darling is a shocking and unsettling novel about child abuse — it can be difficult to read, but it's an excellent debut from the Utah-based author.

Turtle's real name is Julia, but only her teacher and principal call her that. She lives near Mendocino, Calif., with her father, a charismatic sociopath and survivalist who's convinced that the world is due for a large-scale ecological disaster. Martin, whose wife drowned under mysterious circumstances years ago, has trained Turtle to be ready to live off the grid — at 14, she's already an expert markswoman who's most at home in the outdoors.

She's also the victim of horrific mistreatment at the hands of her father, who abuses his daughter physically, emotionally and sexually. Turtle has a severe case of Stockholm syndrome, and justifies her father's psychotic behavior, although she's been starting to wonder why he treats her so badly. "I need you to be hard on me, because I am no good for myself," she imagines telling Martin, "and you make me do what I want to do but cannot do for myself, but still, but still — you are sometimes not careful; there is something in you, something less than careful, something almost — I don't know, I am not sure, but I know it's there."

Turtle begins to question her home life more seriously when she meets two high school boys, and develops a crush on one of them, a sweet teenager named Jacob: "The boys talk in a way that is alarming and exciting to her — fantastical, gently celebratory, silly. To Turtle, slow of speech, with her inward and circular mind, their facility for language is dizzying."

Eventually, Turtle realizes she has to escape, but she knows that Martin won't make it easy — he regularly threatens his daughter and anyone he thinks might take her away from him. After Martin suspects that Turtle has revealed her abuse to her teacher, he hisses, "And even if you tell no one, if you give no sign, if you never breathe a word, but someone, anyone, comes to me again and so much as suggests, I will open your little neck, and won't that be a goddamn beautiful thing. ... You're along for the ride, you little b----."

There's no shortage of things to admire in 'My Absolute Darling' — it's a devastating and powerful debut.

My Absolute Darling is, very obviously, difficult to read, particularly the scenes that detail Martin's abuse. But it's also nearly impossible to put down. It has the pacing of a thriller, particularly in the novel's final scenes, when Turtle realizes she has a major decision to make but very little time to do it. And Tallent somehow manages to work in some light moments, thanks to Jacob and Brett, the wisecracking high schoolers who quickly take a liking to the girl. (At one point, Jacob introduces Turtle to his sister as "the chain-saw-wielding, shotgun-toting, Zen Buddhist, once-and-future queen of post-apocalyptic America."

In Turtle, Tallent has created a memorable and original character. She's easy to feel sorry for, but impossible to pity — she's tough, but capable of tenderness when she lets her guard down. Tallent does a masterful job explaining why some abuse victims stay with the people who hurt them, especially when they've never known a life without abuse: "Her moments of happiness occur right at the margin of the unbearable."

She's not the only well-drawn character in My Absolute Darling. Martin is a weirdly charming villain, and Jacob and Brett are more than just comic relief — they're Turtle's link to the outside world, and their dialogue sounds exactly like the way precocious teenage boys speak.

The country around Mendocino is a character in itself here, too. Tallent's descriptions of the flora and fauna of northern California are beautiful; he makes the countryside, both beautiful and forbidding, come alive. There's no shortage of things to admire in My Absolute Darling — it's a devastating and powerful debut from a writer who's almost certain to have a wonderful career ahead of him.