Accessibility links
Flood Of 'Texas Navy' Private Citizens Help In Houston Rescue Efforts Houston remains in rescue mode as Tropical Storm Harvey continues to dump water on the flooded region. About 5,500 people have been brought to emergency shelters in the city, the mayor said Monday. 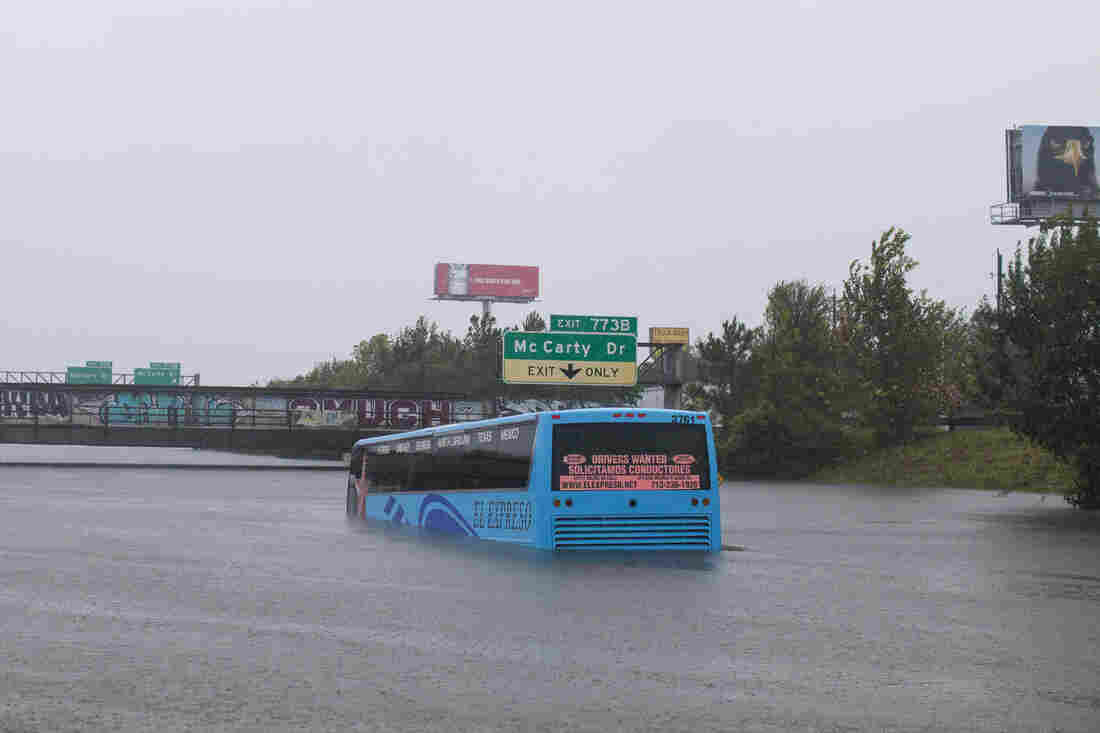 A bus is stuck in the flooded Interstate 10 in Houston on Monday. Hurricane Harvey, a Category 4 storm, made landfall on the Texas coast near Corpus Christi on Friday. Katie Hayes Luke for NPR hide caption 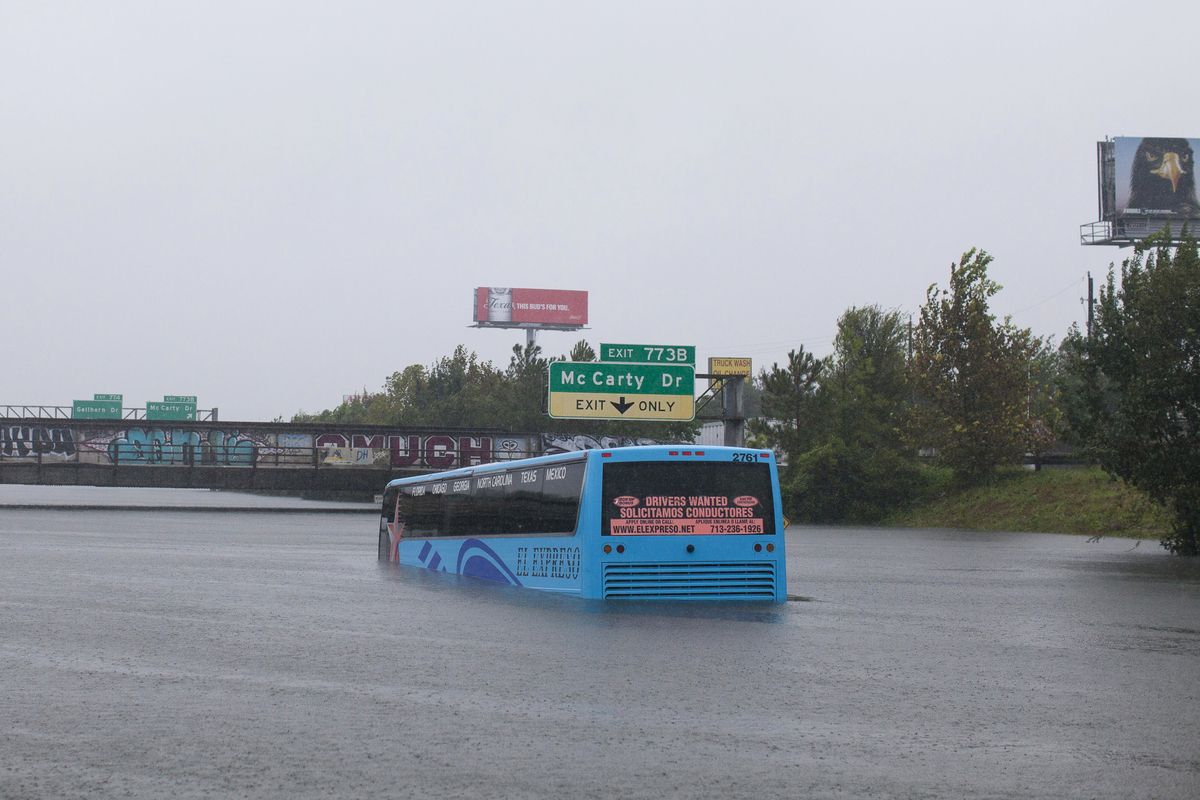 A bus is stuck in the flooded Interstate 10 in Houston on Monday. Hurricane Harvey, a Category 4 storm, made landfall on the Texas coast near Corpus Christi on Friday.

Houston is grappling with a disaster of epic proportions from Hurricane Harvey, as the now-tropical storm continues to dump rain on the region. On Sunday, the death toll rose to eight, including a family of six who drowned in a van while trying to escape the rising waters.

The historic Houston flood of 2017 is deepening, and with it, there are more water rescues — at least 2,000 by Monday afternoon. People who believed that they could wait it out or that the water would go down are realizing they have to get out.

On a downtown street in Houston, an elderly man pushes his wife in a wheelchair. Both wear trash bags for ponchos, as they walk from an arena that was turned into a shelter.

"We had knee-deep water in our house, so we're here," says Mel Mikan, who was rescued with his wife, Barbara, Sunday night by a Bellaire Fire Department boat.

"We were at Crosspoint Church in Bellaire, and we had metro bus come and pick just about everybody up," she says. "Even the Army was out there with their big trucks, and they were bringing us to the Coliseum. Now we have a hotel so that's where we're going now." 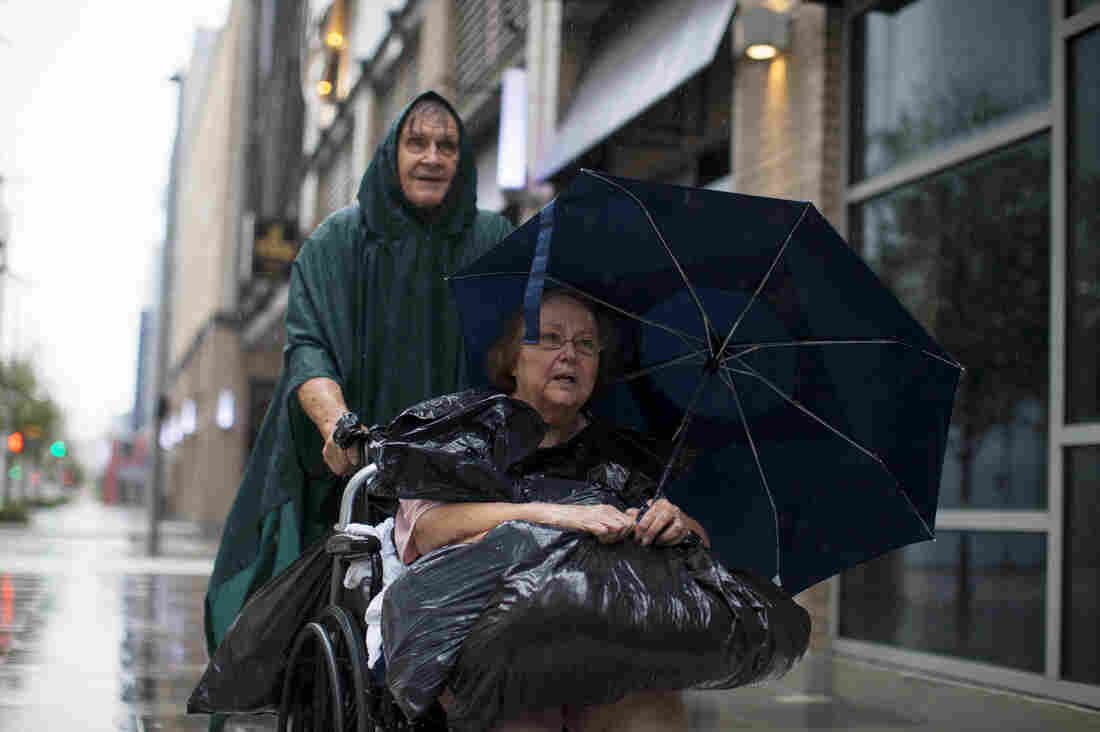 Mel Mikan pushes his wife, Barbara, toward a DoubleTree hotel in downtown Houston. They had been evacuated to the Coliseum. Katie Hayes Luke for NPR hide caption

Houston Mayor Sylvester Turner said at a press conference Monday that about 5,500 people have been brought to emergency shelters in the city. He stressed what is obvious to anyone driving the few passable streets — the city is still very much in rescue mode.

"That's the major focus for the day, that's my directive, is that we want to focus on getting people where they are and getting them out of homes or whatever their stressful situation may be," he said.

All over Houston, you see what is being called the Texas Navy: private citizens pulling their fishing boats behind pickups. They're launching their vessels at the water's edge, which could be anywhere that a street becomes a bayou. Harris County Judge Ed Emmett put out an extraordinary call Sunday. He said the fire department, Coast Guard and police are overwhelmed — they need people to help their neighbors. And folks have responded. 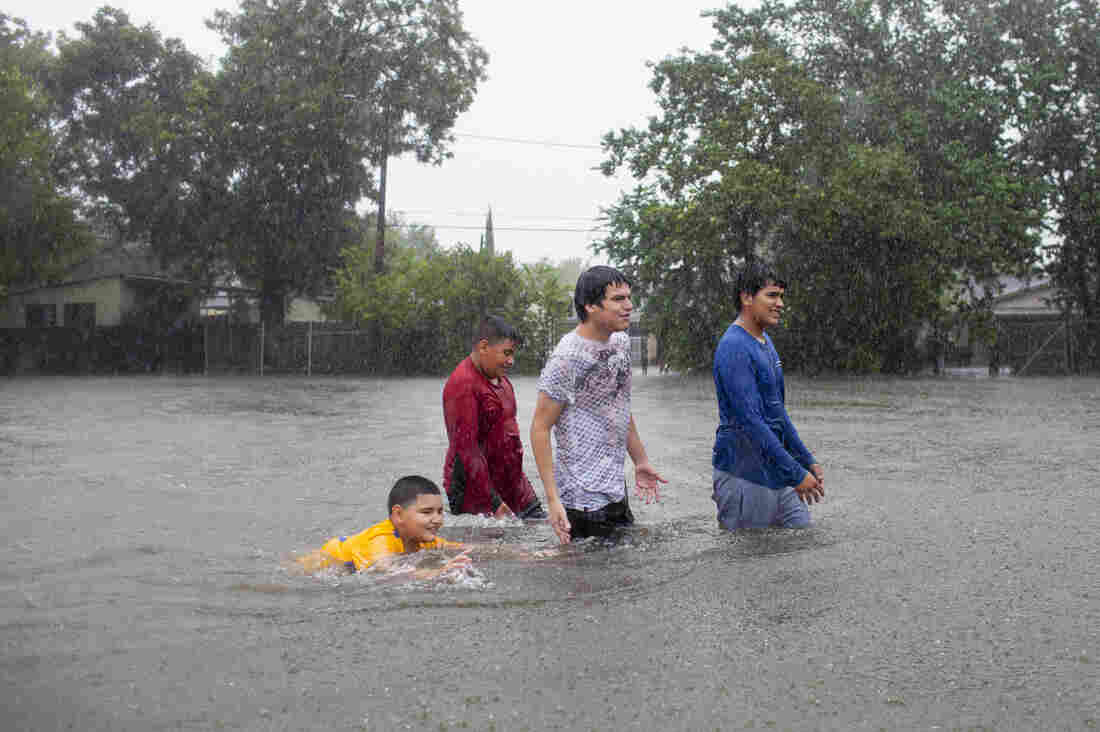 Kids walk — and swim — in the floodwaters in a Houston neighborhood as the rain continues to pour down. Katie Hayes Luke for NPR hide caption

"I've been able to rescue 10 to 15 people at a time. Yesterday was a very good day. We rescued 53 people into the night," says Ray Ortega, an oilfield tool salesman, who drove up from his home in Victoria pulling a 23-foot fishing boat that he usually uses in the Gulf to go after speckled trout and redfish. Ortega was looking for a place to launch his boat and rescue more people.

The Army Corps of Engineers announced that it will open floodgates and release water from two major reservoirs that are perilously full from the tropical deluge. This is expected to push Buffalo Bayou — which flows through the middle of Houston — even higher. Some worry that will cause the flooding to get even worse.

That is why brothers Jay and Manuel Cano came out with their green rowboat to rescue a relative stranded in the flooded Denver Harbor neighborhood.

"We got my wife's sister in there without no light or water since all this started, so we're gonna see if we can help her get out," says Jay. 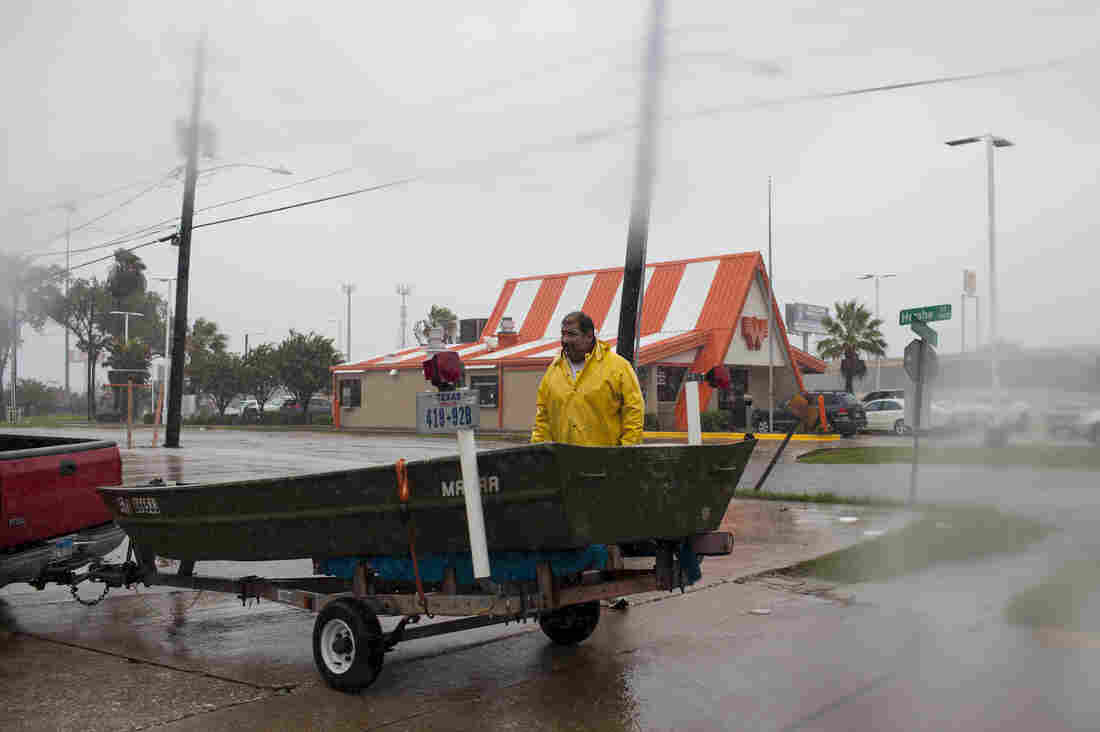 Manuel Cano, with his brother Jay, prepare to take a boat out to try to rescue family members in Houston. Katie Hayes Luke for NPR hide caption 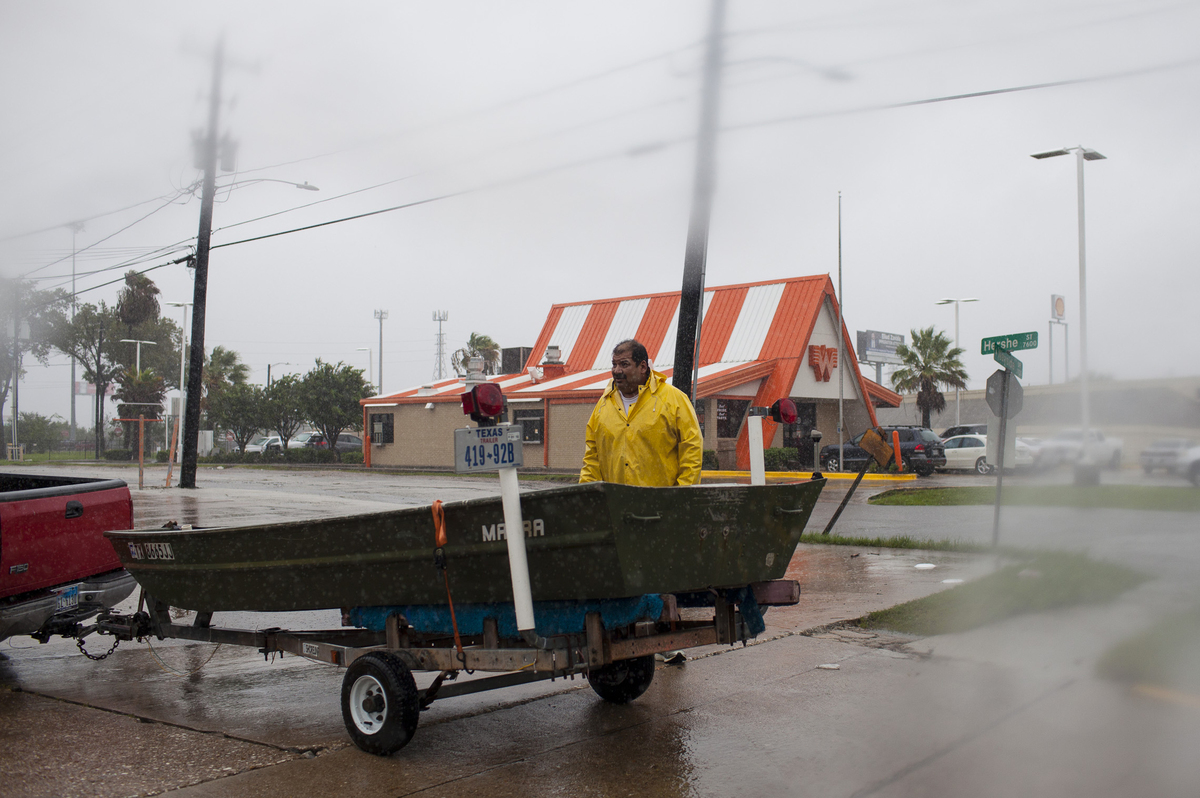 Manuel Cano, with his brother Jay, prepare to take a boat out to try to rescue family members in Houston.

One of the most maddening problems that Houston is facing is the vast acreage of the city that has gone underwater. This makes it difficult if not impossible to get around.

Larry Hall, a juvenile probation officer with Harris County, drove down a street where the water came up to his bumpers, then turned around in frustration.

"I live in Crosby, and I'm just tryin' to find my way home. I left my job off of Chimney Rock, and I've been driving for the last three hours to make it back in that direction."

Meanwhile, the National Weather Service reports that Harvey is expected to produce 15 to 25 inches of additional rainfall over the upper Texas coast and into southwestern Louisiana through Friday. Some isolated totals may exceed 4 feet of rain.