Accessibility links
President Trump Traveled To Texas Tuesday As Federal Official Worked On Initial Response Efforts The president said he waited to visit until he could do so "without causing disruption." He sidestepped Houston and instead stopped in Corpus Christi, where Harvey made landfall, and then in Austin. 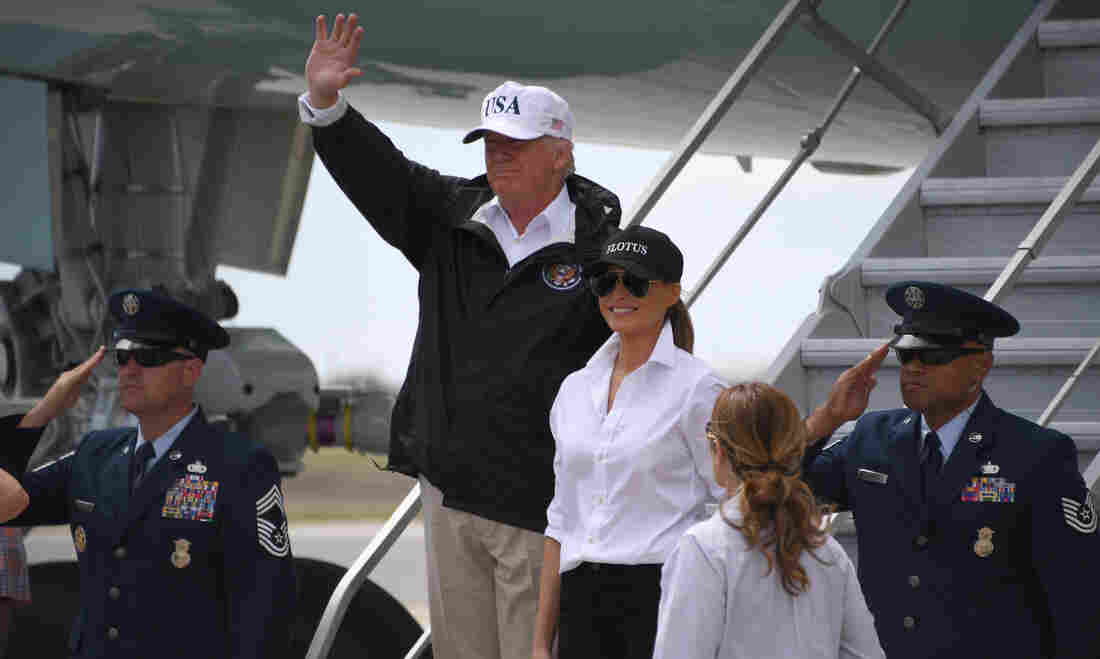 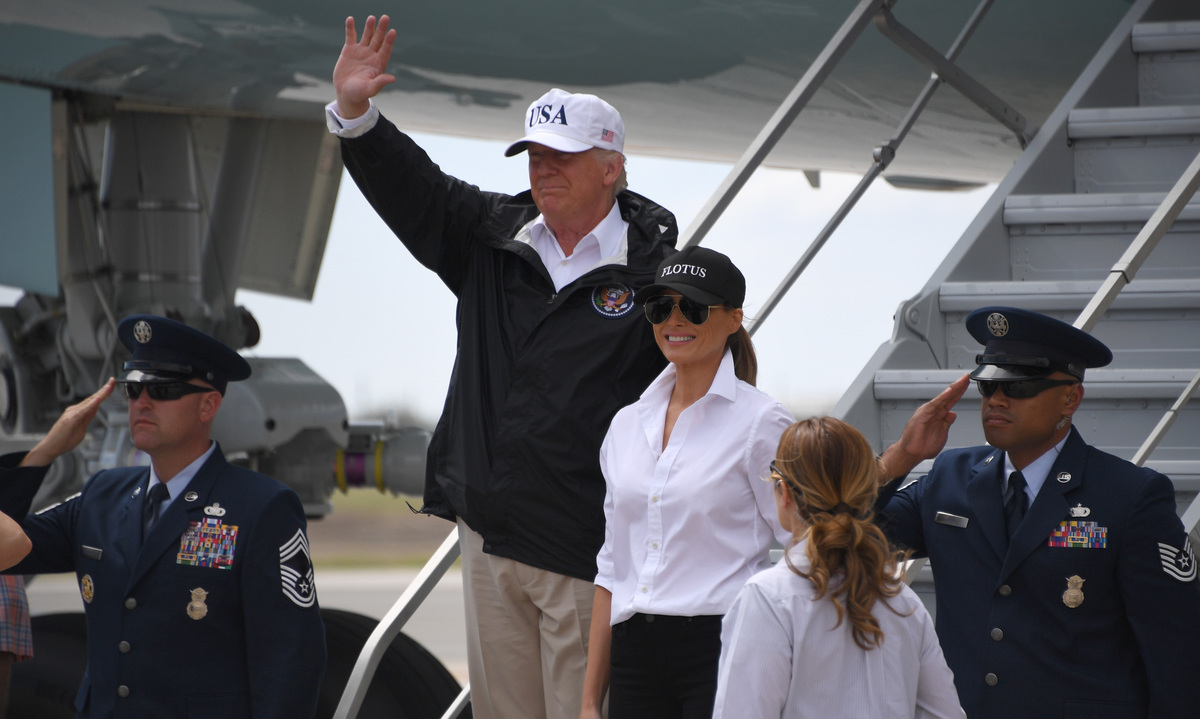 President Trump visited Texas on Tuesday to show support for residents reeling from the effects of Hurricane Harvey and to assess the first stages of the federal recovery effort.

At a briefing with Texas Gov. Greg Abbott and other officials at a Corpus Christi fire station, Trump called Texas a special state and said he wants his administration's efforts at aiding those affected by the storm "to be looked at in five years — and 10 years — from now that 'this is the way to do it.' " Trump said the storm "was of epic proportions. Nobody's ever seen anything like this."

Can Trump Show A Nation He Cares?

FEMA Administrator Brock Long also took part in the briefing, after being introduced by the president as "as a man who's really been very famous on television over the last couple of days."

Long said "all eyes are on Texas, and so are mine," cautioning that rescue and recovery efforts still have "a long ways to go."

He also said the situation at the packed Houston convention center, which is being used as a massive shelter, "is not the Superdome," a reference to the chaos that surrounded the New Orleans stadium after Hurricane Katrina, which struck 12 years ago.

Trump later stood outside the fire station and waved a Texas state flag.

"Thank you everybody," Trump said, saying the response to the storm's flooding "is going well."

As he looked over the gathering at the station, he declared: "What a crowd, what a turnout."

After Pressure Mounts, Joel Osteen Says His Houston Megachurch Is Open To Evacuees

At a stop in the state capital, Austin, Trump toured the Texas Department of Public Safety's operations center, where officials were monitoring developments on TV and computer screens. Trump told them that "the world is watching and the world is very impressed with what you are doing."

He then met with Texas lawmakers including Republican Sens. Ted Cruz and John Cornyn. Trump said, "We'll be working with these characters over there and think we'll come through with a really, you know the right solution," saying recovery from Harvey is "going to be a costly proposition."

"Probably there has never been anything so expensive in our country's history; we've never done anything so historic in terms of damage and in terms of ferocity as what we've witnessed with Harvey," Trump said. "It sounds like such an innocent name," he said, "but it's not innocent."

To avoid complicating ongoing rescue efforts, Trump sidestepped Houston, where floodwaters have been rising for days. Instead, he and first lady Melania Trump visited Austin and the Corpus Christi area, where Harvey made landfall Friday night, packing 130 mph winds. It was downgraded to a tropical storm by Saturday evening. Trump said he may pay a second visit to the region on Saturday. Depending on the path of the storm, that trip could also include a stop in Louisiana.

The president has been eager to travel to Texas since the weekend but said he waited until he could do so "without causing disruption." Trump tweeted on Sunday: "The focus must be life and safety."

I will be going to Texas as soon as that trip can be made without causing disruption. The focus must be life and safety.

Tuesday's visit was an early test of Trump's talents as comforter in chief. Natural disasters can provide a showcase for presidents to demonstrate compassion and leadership. But they can also be a political minefield if frustrated and exhausted residents judge the government's response to be inadequate. 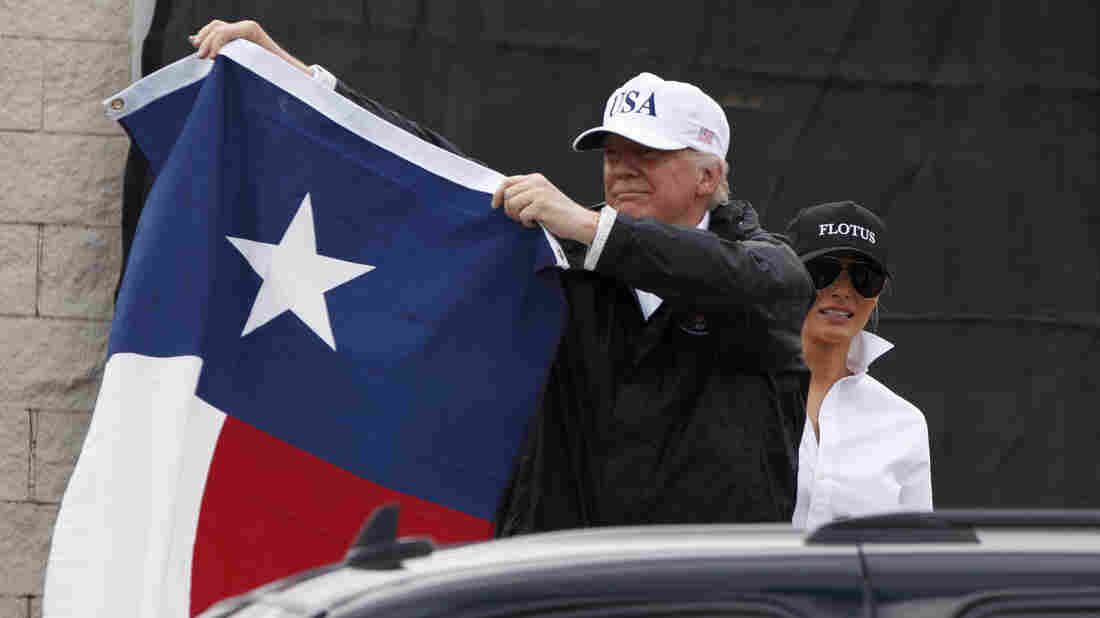 Trump holds up a Texas flag after speaking with supporters outside Firehouse 5 in Corpus Christi, Texas, where he also received a briefing from state and local officials. Evan Vucci/AP hide caption 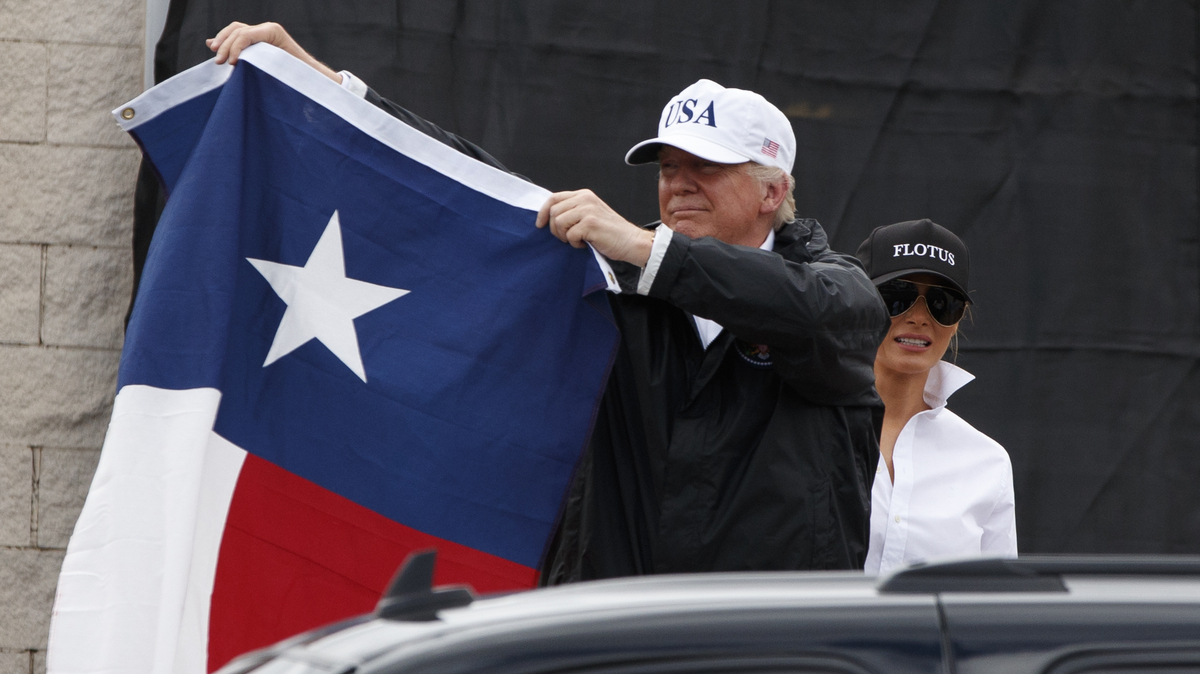 Trump holds up a Texas flag after speaking with supporters outside Firehouse 5 in Corpus Christi, Texas, where he also received a briefing from state and local officials.

A year ago, as a presidential candidate, Trump paid a surprise visit to flood-ravaged parts of Louisiana. Then-President Barack Obama, who was vacationing at the time on Martha's Vineyard, was criticized in some quarters for not making his own trip. Obama traveled to Louisiana the following week.

Trump made an effort to get ahead of Hurricane Harvey, signing a disaster declaration for Texas on Friday night, as the storm was bearing down on the Gulf Coast. The president signed a separate emergency declaration for neighboring Louisiana on Monday.

The Coast Guard and Texas National Guard have been assisting in rescue efforts. On Tuesday, Vice President Pence said that there were "more than 8,600" federal officials on the ground through FEMA and that the federal response effort has already delivered more than 2.5 million meals and 2 million liters, about 530,000 gallons, of drinking water "with more on the way."

The administration acknowledges, however, that recovery from a storm of this magnitude will take both money and time.

"We're 100 percent focused on lifesaving efforts right now," Pence told Rush Limbaugh on Monday, adding, "but once the floodwaters subside, then the real work of recovery will begin in earnest."

"When you look at the magnitude of the flooding that's taken place in the fourth-largest city in the United States," he said, "we anticipate that it will be years coming back."

Trump said Monday that the administration has already begun talking to lawmakers about what promises to be a costly recovery effort.

Economic Impact of Harvey Could Be Felt Nationwide Before It's Over

"It's going to be a very expensive situation," Trump said. "We want to take care of the people of Texas and Louisiana."

After past disasters, Congress has opened its checkbook, authorizing $110 billion in aid after Hurricane Katrina in 2005 and $51 billion following Superstorm Sandy in 2012. Many Republican lawmakers from Texas voted against the Sandy relief, which colleagues from New York and New Jersey have not forgotten.

"Despite my TX colleagues refusal to support aid in #SouthJersey time of need, I will support emergency disaster $$ for those impacted," Rep. Frank LoBiondo, R-N.J., tweeted on Monday. "Must stand together as Americans, not be hypocritical based on geography," he added.

Trump voiced confidence that recovery funding may be the unusual item in Washington that attracts bipartisan support.

"We think you're going to have what you need, and it's going to go fast," Trump told a reporter for a Texas newspaper prior to his trip Tuesday. "I think you'll be up and running very, very quickly." 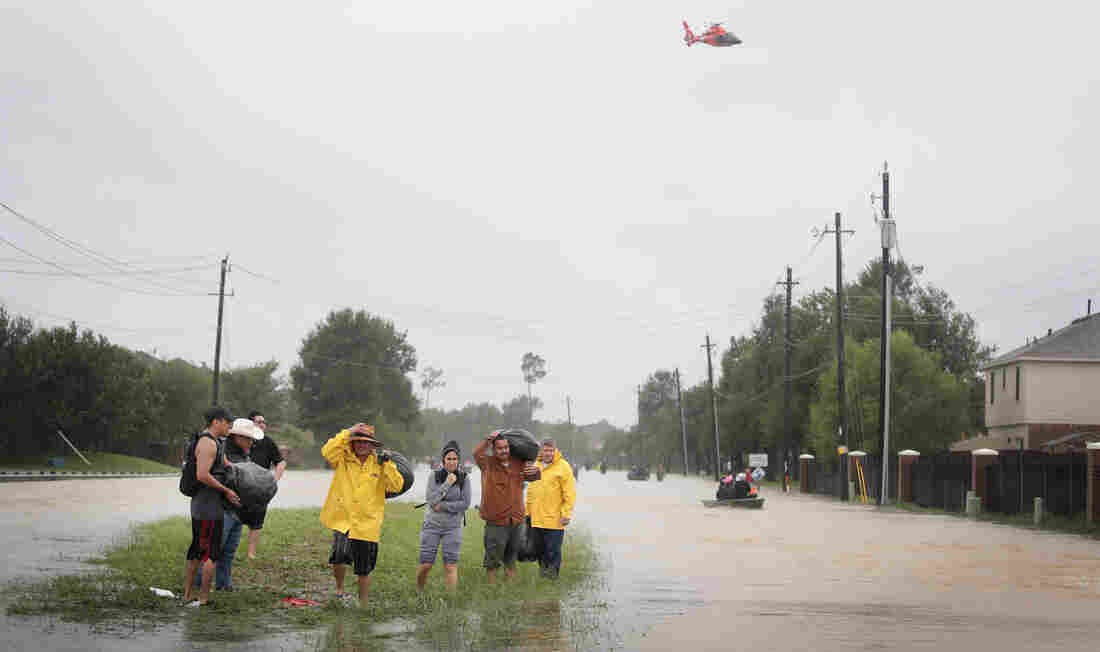 People make their way out of a neighborhood flooded by Tropical Storm Harvey in Houston on Monday. Trump did not visit Houston so he won't complicate relief efforts. Scott Olson/Getty Images hide caption 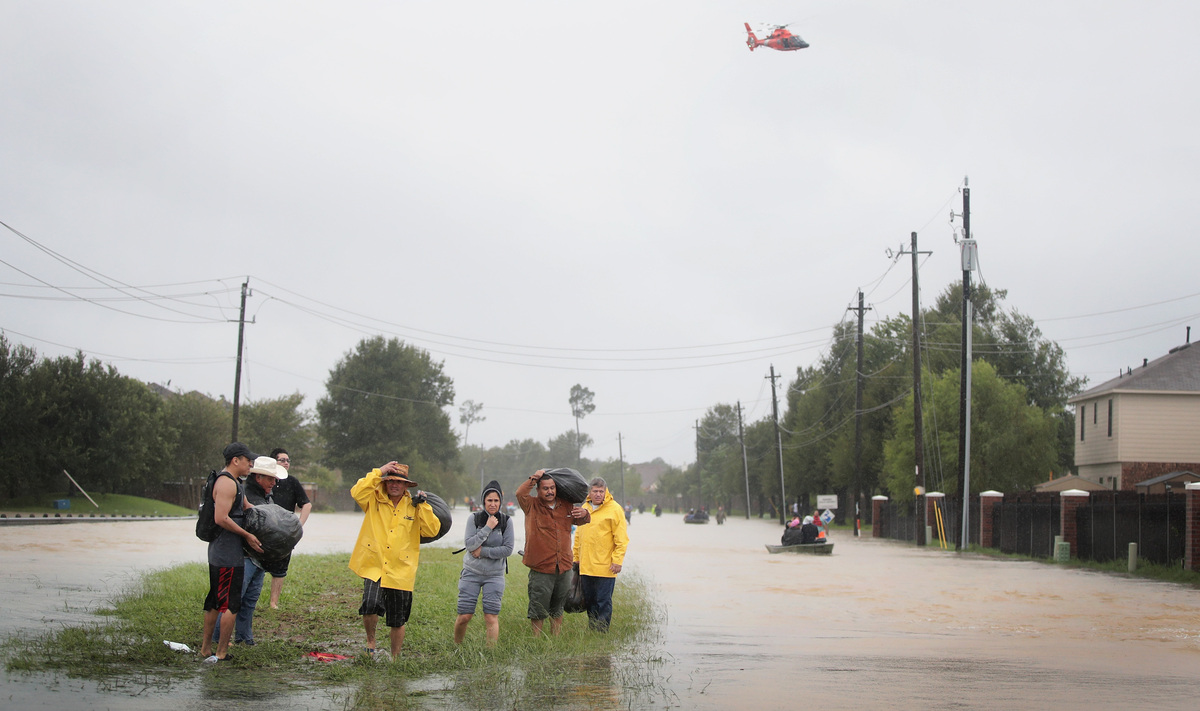 People make their way out of a neighborhood flooded by Tropical Storm Harvey in Houston on Monday. Trump did not visit Houston so he won't complicate relief efforts.