Accessibility links
Amplified And Orbital: Queens Of The Stone Age's Josh Homme On Living In The Moment The band's frontman and founder talks to Kelly McEvers about being "a now-ist," working with Mark Ronson and Iggy Pop and the dancey sound on the band's new record, Villains. 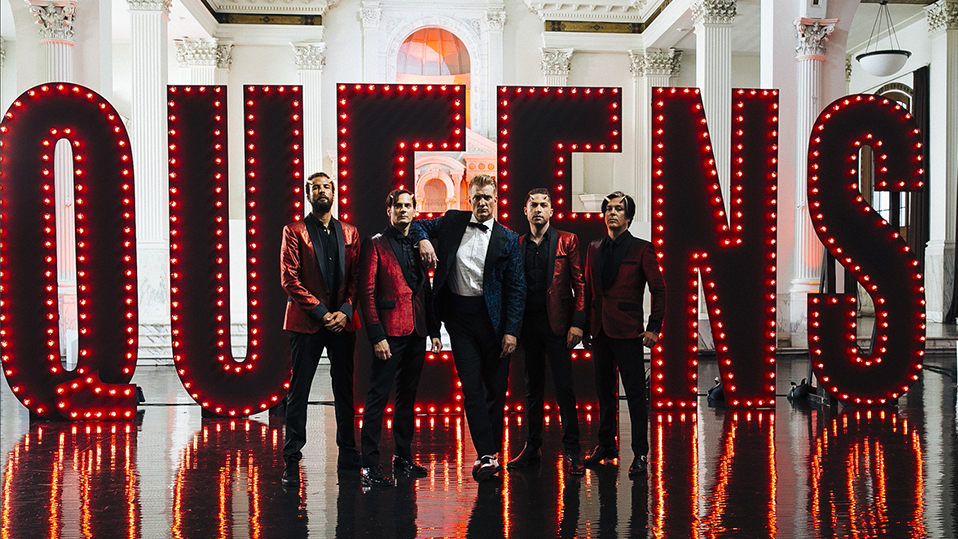 The past few years have been all over the map for Josh Homme.

There has been cause for celebration: The frontman and founder of Queens of the Stone Age produced a record with and toured with his childhood idol, Iggy Pop.

But there has also been tragedy. Homme's other band, the Eagles of Death Metal, was playing at the Bataclan during the horrific Paris attacks almost two years ago. Though Homme was not there that night, he still does not talk about it.

The new Queens of the Stone Age album, Villains, shows few signs of that darkness. The upbeat, even dancey record was produced by Mark Ronson, who famously worked with Amy Winehouse, Adele and Lady Gaga before working on Villains.

Homme talked to NPR's Kelly McEvers about the band's "orbital" approach to the music on Villains, working with Iggy Pop and why he won't discuss the 2015 attack at the Bataclan. Hear the conversation at the audio link or read an edited transcript of the interview below.

Kelly McEvers: How did you come to work with Mark Ronson? You're two guys from two very different musical worlds.

Josh Homme: He asked me to play on the Lady Gaga record, so I played on about four tracks, five tracks. And I got to watch him work. He's a great communicator. I've kind of banked everything on music being my religion and my philosophy and my way to leave baggage behind and learn something. He was very understanding of that and I think he got excited at that reality. Plus he dresses like a gangster on vacation, so he looks very handsome.

All the time! He's got the best hair.

You are a rock 'n' roll dude. You don't have your leather jacket on today, but you've got your tatted hands, you've got your serious cane that looks like it could maybe hurt somebody.

Right. [Laughs.] But you have this new album! And it's kind of electronic and dancey.

Yeah, I mean, normally we have three guitar players. Lynyrd Skynyrd did three guitar players wonderfully but it's difficult to do. So while two guitars are going, when a vocal leaves, something needs to vocalize and carry the tune. So we had our keyboard player Dean [Fertita] sort of lead that way in this sort of John Carpenter [way]. You know, John Carpenter did all the soundtracks to his movies, and there were these sort of broken, robotic keyboard sounds — very dental, perhaps, sometimes.

I would love an example.

Of his or mine?

I mean, the Halloween soundtracks — everything seems to start with this stark bing bing bing bing, then it goes into these kind of noises. [Imitates noises.] And for us, a song like "Fortress" would be a great example of keyboards leading the way.

When I think about your last album, ...Like Clockwork, it was dark.

Yeah, I had troubles.

You had some health issues. So what is it that this album is tracking, in terms of your life? Are things just kind of better, and you're in a good place? Is that what's happening?

Yeah. What I took from that was — I felt like if I was gonna carry the flag for anything, it was being yourself in the moment. And if there's a moment hanging in the air, grab it and make it yours. Especially after working with Iggy Pop as well, on Post Pop Depression. It was like — say what you want, like and don't like what you want, but I'm going to run — now.

Let's talk about working with Iggy Pop. How did that come about?

Well, in a very modern way: I got a text.

[Laughs.] Wait, what did it say? Because nobody else in the world gets this text. So I feel like we need to linger on this moment for a minute.

It said, "Hey, was thinking maybe we could record something. Let me know what you think. Iggy Pop." And if you'd told the 13-year-old me that that was the case, that was gonna happen, I would've gave you the finger and skated off.

I wanted to listen to another song that our colleague Gabe says is his new anthem: "The Evil Has Landed." It's definitely rock. There's also this kind of Bryan Ferry thing going on, too.

Absolutely, sort of Sly & the Family Stone, perhaps? Using double-time to go half-time. There's something that was really important to me and that I explained to Mark, and that the guys knew early, is that many songs are like a merry-go-round. When the chorus comes back around you've heard it, you're familiar with it, it's the same. Perhaps the words change, perhaps they don't. And for me, this needed to be very orbital, where every time you hear a part, you hear a verse come around, it's only 40 percent the same; it's been altered each time. And the chorus as well. That way, it's more like getting on a bus at a bus stop: You get on one place, you get off somewhere else. And you don't understand what's going to happen at all times. But you feel comfortable; hopefully, you feel comfortable.

Yeah. "It's my bus." This orbital style — I figured, however we're spinning on the planet, spinning 'round the sun: Let's try this same thing with music.

You said you don't like to talk about Bataclan and I'm not going to linger on it too much. But I guess what I want to know is: Why? Why don't you want to talk about it?

There's so much that I could not explain, that is not up for discussion, that does not require your opinion, that isn't impacted by my own. There are people's [pauses] kids, which I have — And, I don't talk about the Bataclan because, in some ways, it's the business of the world and in other ways, it's nobody's business. But I can't explain how rough that was in a way that I care what you think, you know? I'm sorry to say it that way.

No, I think I see what you mean.

And so I just say I don't like to talk about that, because I don't. I hate it. But it didn't change anything for me. It amplified everything and who I am.

Yeah. Yeah. You can't stop what I have coming.