Accessibility links
Mirrors And Neck Ruffs: 'The Ladies-In-Waiting' Takes On Velázquez Writer Santiago García and artist Javier Olivares examine Diego Velázquez' painting Las Meninas and its influence down the centuries with a heady — and sometimes heavy — mix of comics and high art. 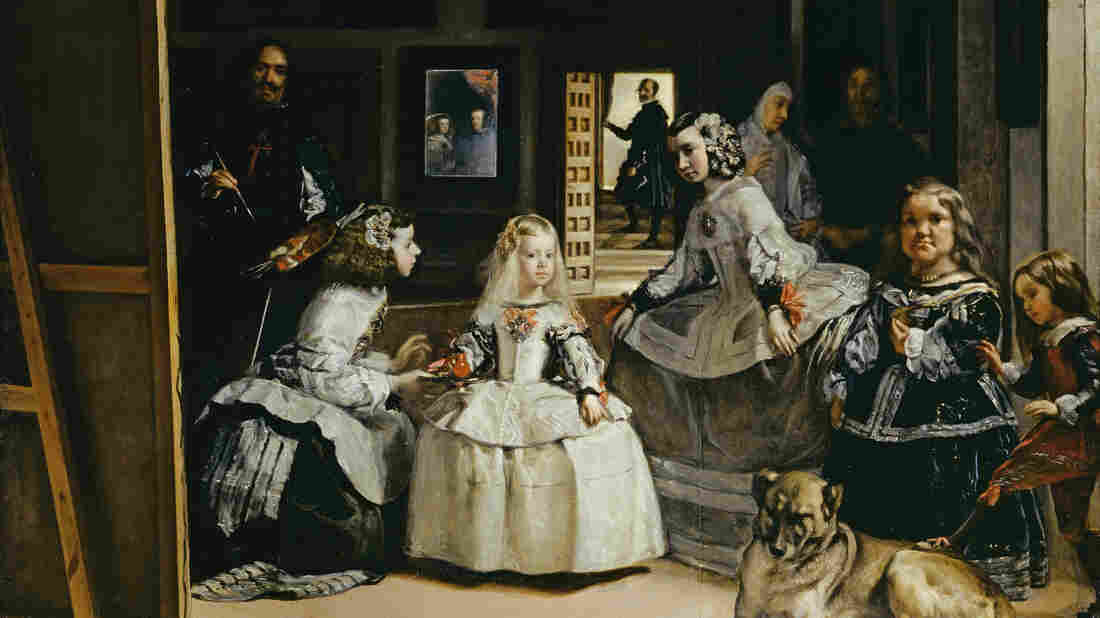 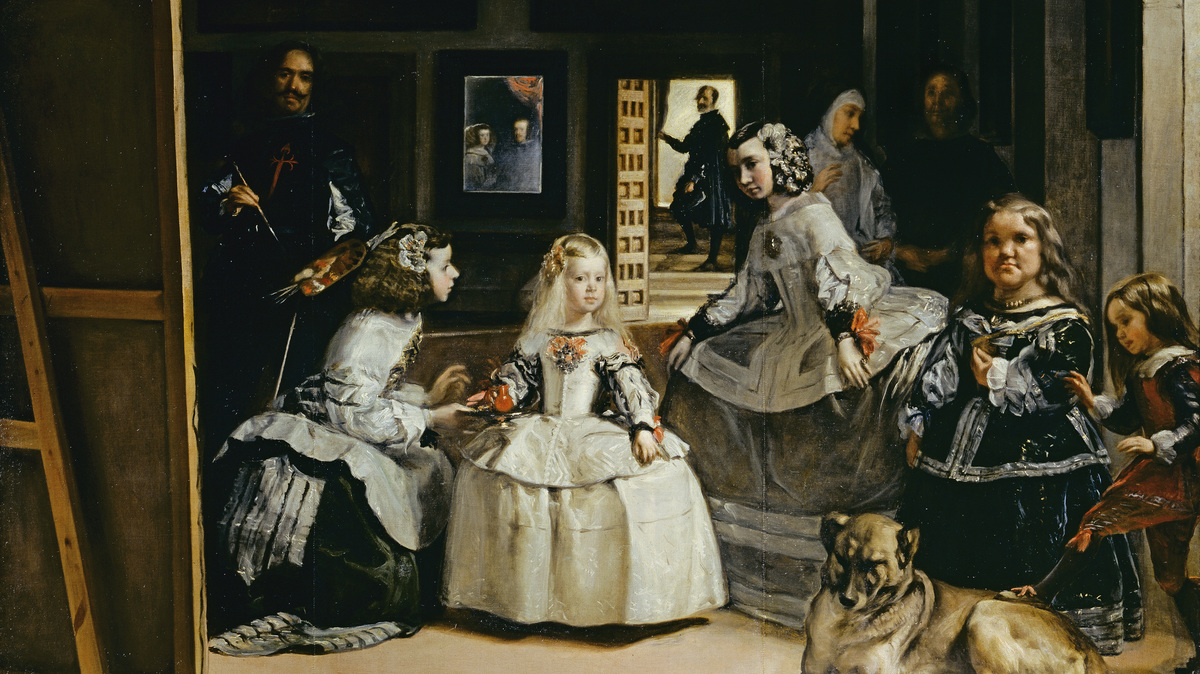 A detail from Diego Velázquez' famous painting Las Meninas, or The Ladies-in-Waiting.

There are a lot of famous mirrors in art history. From Jan van Eyck's Arnolfini Portrait — in which an eyelike mirror casts an aura almost as unsettling as the subjects' 1430s fashions — to Yayoi Kusama's dizzying, futuristic mirror rooms, a reflective surface can evoke anything from God's unflinching scrutiny to the modern ego's construction of itself. 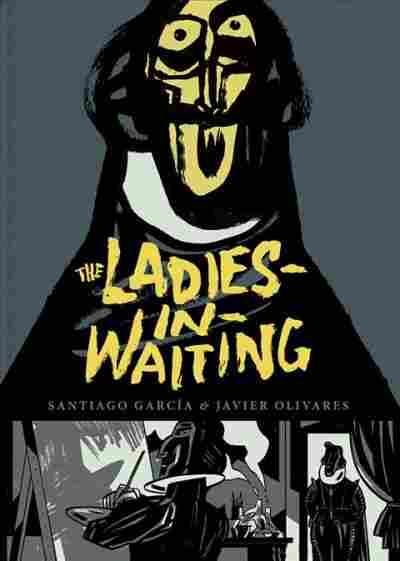 Even in this crowded field, Diego Velázquez' 1656 Las Meninas (The Ladies-in-Waiting) maintains a special hold on viewers' imaginations. The elaborately gowned girl at the center is weirdly poised for her age. The presence of the artist himself, standing to one side with brush in hand, gives the scene a jolt of unexpected modernity. Then there's that mirror in the background. Framing two hazy faces, it makes it unclear who's looking at whom.

For Santiago García and Javier Olivares, Velázquez' painting is itself a kind of mirror, offering kaleidoscopic angles on history and culture. By telling the story of Las Meninas' creation and its subsequent influence over generations of artists, they hope to find insights into timeless aesthetic questions — even, with the graphic novel format, prompting the reader to muse on the relationship between comics and high art. It's a heady — and heavy — mix.

Maybe too heavy; García even includes a bibliography of titles like Michel Foucault's The Order of Things. As if determined to show off the effects of his reading, he jumps between historical periods in the best postmodern fashion, dropping in on artists who've been impacted by Las Meninas over the centuries: Goya, Picasso, Dalí. Maintaining a knowing, high-low tone, he casts some anecdotes in the vein of sensationalistic comics — "True Crime Stories: Murder In Main Street" — only to turn around and spout lines like "Maybe it's time to give a name to the image that appears at the heart of a text and that the writer contemplates before his notebook." Anyone who still doubts comics' intellectual potential will find plenty of ideas here. But while García gestures in impressive directions, he never really digs into his themes.

Museum of Masterpieces Made for a Coffee Table

Actually, The Ladies-In-Waiting is most successful when García ditches all that brainy stuff and just shows us Velázquez and his world. Living and working in a sprawling Spanish court, determined to advance creatively and yet dependent on the whims of a monarch, Velázquez faced tradeoffs and constraints that have dogged artists through the centuries. The machinations of his onetime assistant Juan de Pareja are even more engaging, though they occupy far too few pages here. A Moor born into slavery, Pareja tweaks circumstances to obtain freedom and an artistic career of his own.

Aspiration, frustration, chance: There's nothing archaic about this tale except the neck ruffs. And in fact, the extremes of Renaissance haberdashery aren't all that obtrusive, thanks to Olivares' muscular style. He's the perfect artist for this material. His slashing strokes and exaggerated expressions recall Max Beckmann and Georges Rouault, especially when he's drawing bodies in the throes of torture or illness. German Expressionism circa 1915 quickly comes to seem like the most obvious way to depict 17th-century Spain, an era likewise marked by extremes of morality, law and fate.

García's postmodern storytelling requires Olivares to try for a new style every few pages, switching from the atmosphere of Renaissance Naples to the Spanish seaside in the 1960s (where we find Dali painting on his balcony) to the Victorian garden of William Merritt Chase. Olivares' versions of these scenes are uniformly heavy and assertive — you'd never mistake these lines for anyone else's — but he changes things up with different color schemes. He even throws in a little homage to the posters of Peter Max.

The effect is, as it's intended to be, a bit like angling a mirror to pick up different reflections. True to Velázquez and his heirs, Olivares and García know that each of those flickering glimpses shows a different side of the truth. Their mirror has flaws, but it still catches plenty of light.