Accessibility links
In Storm-Tossed Houston Area, Most Homeowners Lack Flood Insurance Congress is widely expected to approve billions in aid for flood-stricken areas, but it may take awhile to arrive. 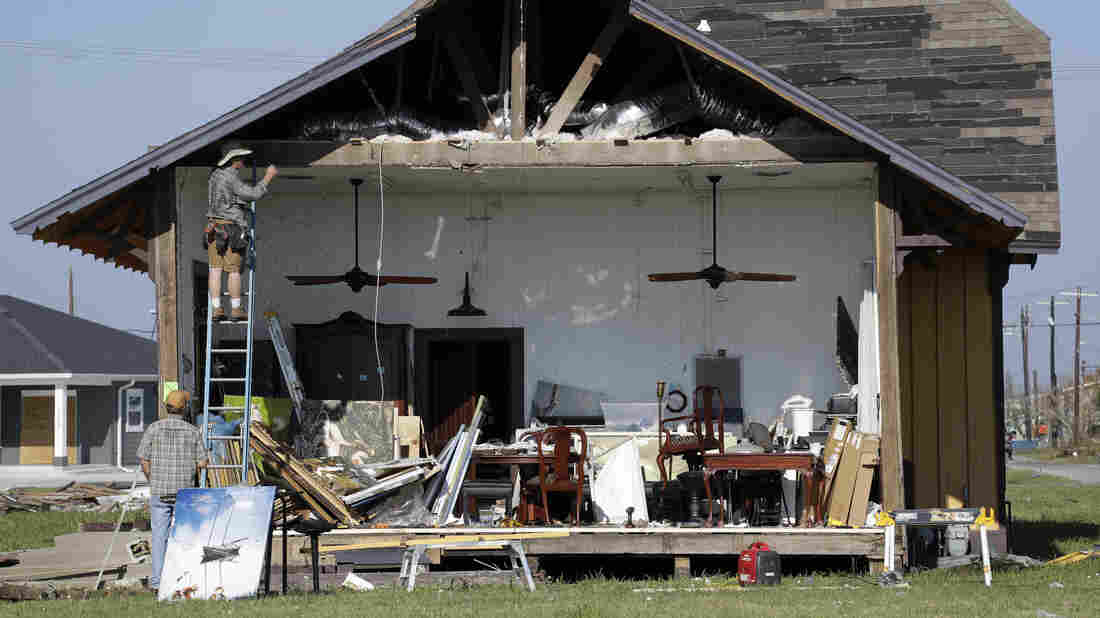 Workers begin repairs to a wall that was lost in the wake of Hurricane Harvey on Wednesday in Rockport, Texas. Most insurance policies don't cover flooding damage. Eric Gay/AP hide caption 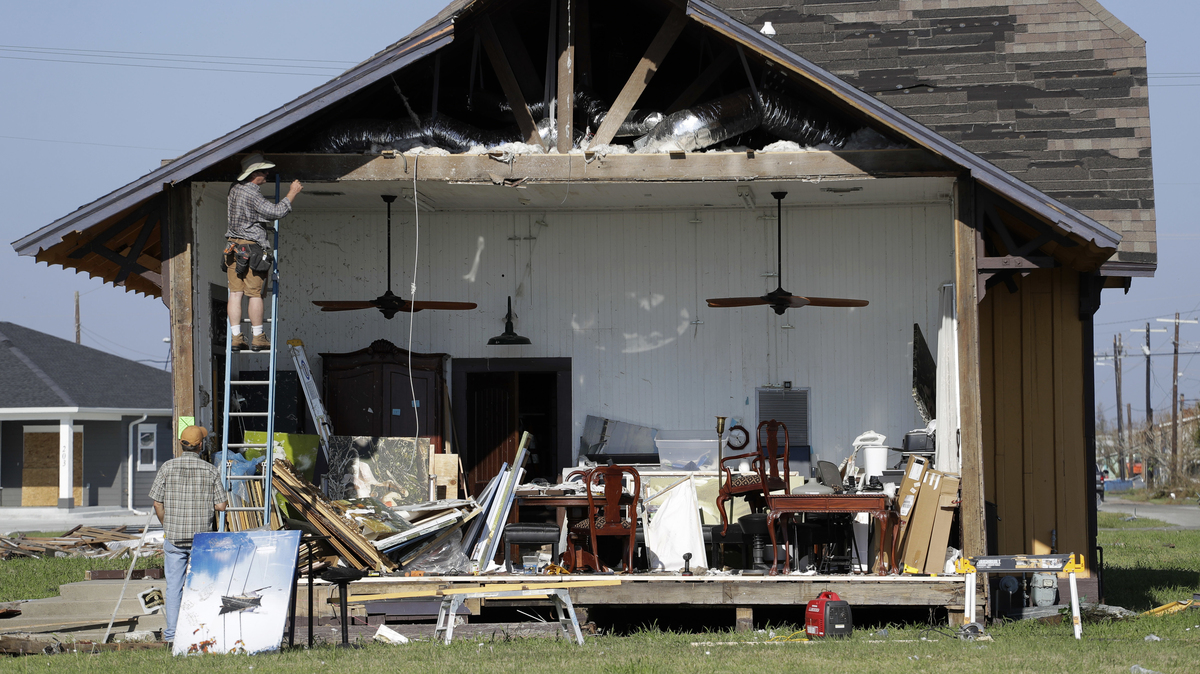 Workers begin repairs to a wall that was lost in the wake of Hurricane Harvey on Wednesday in Rockport, Texas. Most insurance policies don't cover flooding damage.

A friend sent a photo to Jaime Botello's phone Wednesday that confirmed his fears: The house where his family has lived for 30 years is completely flooded.

And like most people in the Houston area, Botello, a welder who was at a shelter with his wife on Wednesday, doesn't have flood insurance. He says he can't afford it.

Texas officials say some 49,000 homes have been damaged by the massive flooding that has come in the wake of Hurricane Harvey. The vast majority of the owners don't have flood insurance.

"It's a terrible disaster just on the facts you see when you look at TV or the pictures," says Bob Hunter of the Consumer Federation of America, a former Texas insurance commissioner. "But it's also a terrible potential second disaster because so many of the people are not going to be insured."

Most insurance policies don't cover flooding damage. To obtain it, homeowners go through the National Flood Insurance Program, which is administered by the Federal Emergency Management Agency.

But even though the premiums are effectively subsidized by the government, most people choose not to take out flood insurance, especially those who live in areas not generally considered flood-prone. In fact, the Associated Press reported recently that fewer than 20 percent of Houston homeowners have flood insurance — less than five years ago, despite the city's rapid population growth.

Those who lack insurance have a few options. The government offers low-interest loans to businesses and homes damaged by the storm. "But it's still a loan. You have your old mortgage to pay and now you have a new loan to pay off," Hunter notes.

The government also provides grants to homeowners to make their homes habitable again, but the grants are not large.

"Disaster aid from the federal government is much more limited than I think [people] realize," says Carolyn Kousky, director of policy research and engagement at the Wharton Risk Center. President Trump has authorized FEMA to make grants to homeowners under what is called the Individual Assistance Program, she says.

"But the average amount these grants pay out historically is more like $5,000. And the reason it's so low is that they're really just to make your home safe and habitable again. They're not to bring your home back to pre-disaster conditions.

"To bring them back to pre-disaster conditions, you really need to have insurance, and I think that message may not be getting out there effectively before storms," she says.

In addition, the Department of Housing and Urban Development has block grants for communities damaged by Harvey, although it can take a long time to process them.

And Congress is widely expected to approve billions of dollars in additional aid.

"What's going on is so unprecedented and so terrible and horrible that Congress is probably going to be very generous in how they do disaster relief," Hunter says.

But it may be years before the money reaches its targets.

"It can take months and even years in some cases between when it's authorized by Congress and when a person actually sees a check from it," says Kousky.

She says FEMA has taken steps to reform its process for getting aid to victims of natural disasters, after its much-criticized handling of Hurricane Katrina in 2005 and Superstorm Sandy in 2012.

"I guess it remains to be seen how effective those are, but there's been a lot of changes to the claims-handling process, so hopefully it will go better this time," she says.

In addition, a new Texas law goes into effect on Sept. 1 that will make it harder for people to sue insurance companies that take too long to pay claims.

State officials say the new law shouldn't affect people whose homes were damaged by Harvey, but it's already adding to the confusion a lot of people feel as they begin to rebuild their lives.