Accessibility links
Trump Wore USA Hat To Visit Hurricane Zone, And Trump Fans Can Buy The Look The president's re-election campaign will sell you Trump's USA hat in white, red or camouflage for $40. 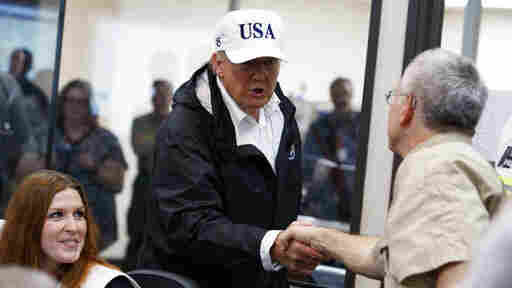 President Trump, with a well-known fondness for golf hats bearing slogans, toured post-Hurricane Houston on Tuesday wearing white headgear emblazoned with "USA." It had a U.S. flag on one side, and on the other side — maybe this was the giveaway — the numeral 45. Trump is the 45th president.

It was merchandise from his re-election campaign's online store. On a webpage not updated since January, the campaign sells "the Official USA rope hat worn by 45th President-Elect Donald J. Trump, himself" for $40 – available in red, camouflage or white. And yes, it was made in the U.S.A., according to the website.

The White House issued a press release with photos of the white-hatted president meeting with Texas Gov. Greg Abbott and other officials. A White House spokeswoman seemed to dismiss concerns about merchandising, citing the hat's USA logo.

But Fred Wertheimer of the watchdog group Democracy 21 said Trump has blended his business activities with his White House duties.

"There's no apparent line for the president on how his office can be used for financial benefit, for profit going into his pocket or money going into his campaign," Wertheimer said. "In essence, he's now licensing the presidency."

No other president has created a re-election campaign committee as quickly as Trump.

Another watchdog group, Citizens for Responsibility and Ethics in Washington, found fault with the official photos. Spokesman Jordan Libowitz said, "The White House should be dedicated to the people's business, not Trump's business. It is wholly inappropriate for them to promote Trump products, of any kind, at any time."

CREW is already suing Trump for alleged violations of the Constitution's Foreign Emoluments Clause. The lawsuit says Trump profits from lavish spending by foreign diplomats at his hotel near the White House.

While most other presidents in recent decades decided to avoid conflicts of interest by separating themselves from their investments, Trump has chosen to maintain ownership of his hundreds of businesses. Critics contend that when he uses his Mar-a-Lago Club in Florida and Bedminster golf club in New Jersey as presidential retreats, he is also promoting them.