Accessibility links
Fact Check: Trump's Tax Speech In Springfield, Mo. Without revealing any particulars, the president pitched his ideas for a tax code overhaul on Wednesday. Here are four claims he made and how close to correct he was on all of them. 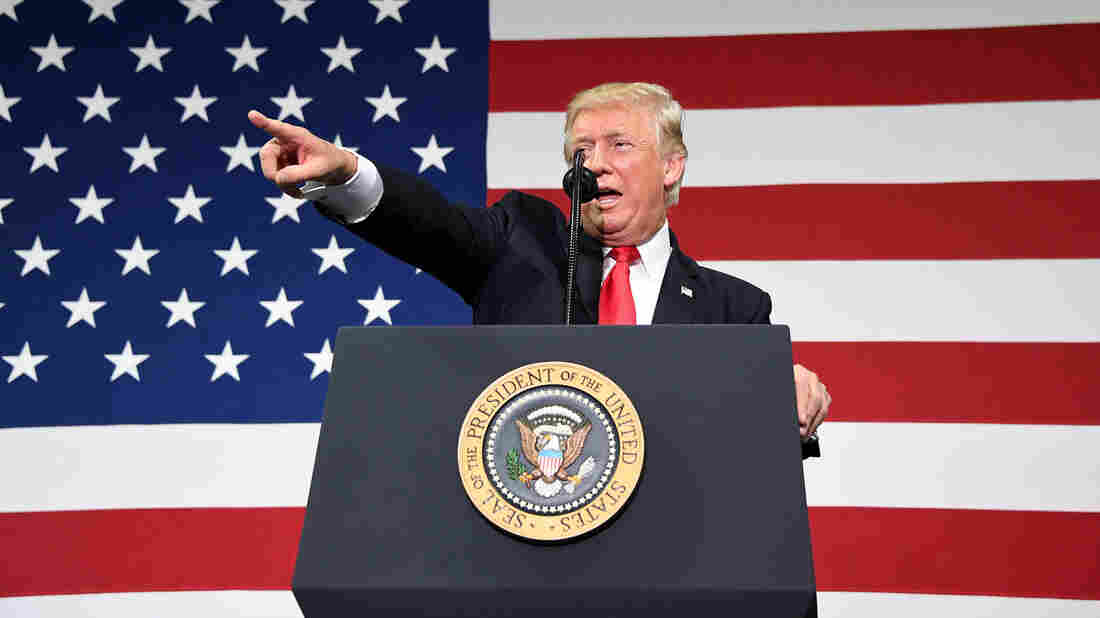 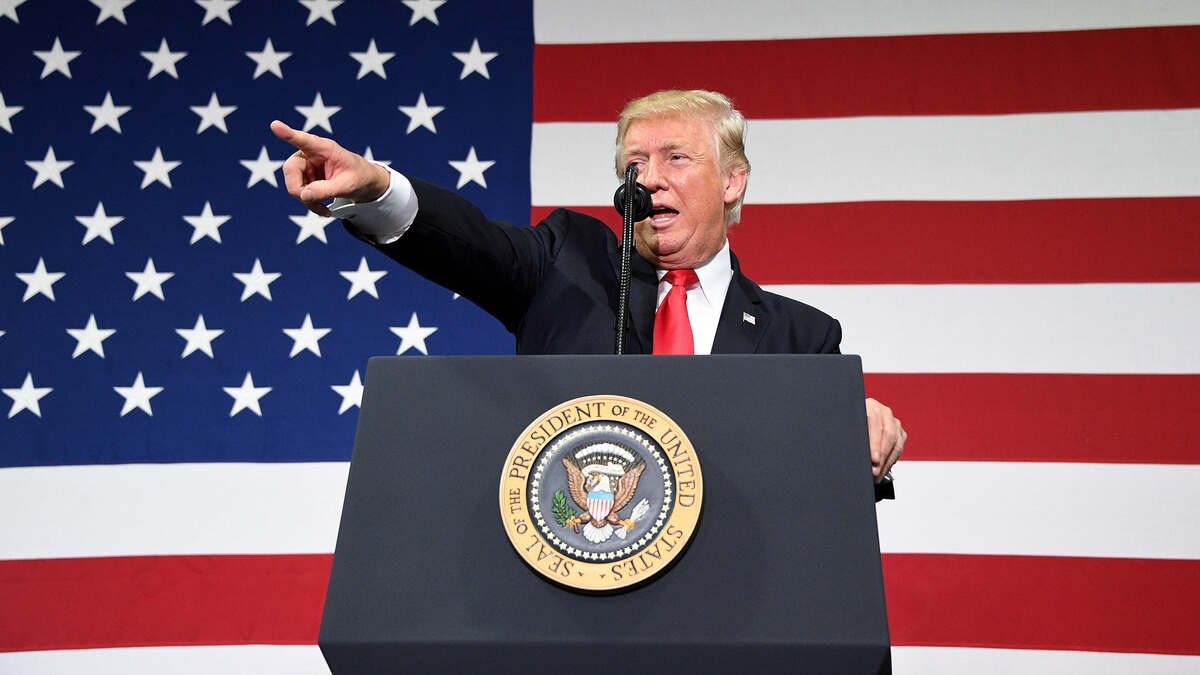 President Trump pitches tax overhaul at an event at the Loren Cook Co. in Springfield, Mo., on Wednesday.

President Trump pitched a tax overhaul package on Wednesday in a speech that was heavy on politicking and light on the particulars.

Trump's tax policy ideas are still sketchy — when pitched in April, they amounted to one page of bullet points. In his Wednesday remarks, he didn't add much more detail beyond the broad strokes, saying he wants lower rates for the middle class, a simpler tax code, lower corporate rates and for companies to "bring back [their] money" from overseas to the U.S.

In his speech in Springfield, Mo., though, he said a few things that were misleading or could use more context. Here are four fact checks:

"We just announced that we hit 3 percent in GDP. Just came out. And on a yearly basis, as you know, the last administration during an eight-year period never hit 3 percent. So we're really on our way."

He's right that on Wednesday, the Commerce Department announced that the economy grew at a 3 percent rate in the second quarter. This was an upward revision from a previously announced 2.6 percent (and will still be revised again).

There's a technicality here, though: Trump used the phrase "on a yearly basis." If he's talking about calendar years, he's right, but barely. According to Commerce Department data, annual GDP growth during Obama's presidency hit a high of 2.9 percent in 2015 — so, just shy of 3 percent. But then, if he is measuring any given 12-month period, he's not right; year-over-year GDP growth was at times over 3 percent during the Obama presidency.

Either way, that 3 percent rate he pulled out is how annual growth would look if growth from the second quarter were to hold for a full year. Reporting the GDP rate in this annual way makes it easier to show whether growth was faster in, say, this quarter than it was in prior years. But once again, it still has that hypothetical aspect to it.

And that leads to a more important point here: Many economists believe that sustained 3 percent growth, like Trump says he can help create, is unlikely. The Committee for a Responsible Federal Budget earlier this year tried to game out how that kind of GDP growth could happen. Its outlook was not rosy.

"By our estimates, returning capital growth, productivity growth, and prime-age labor force participation to where they were in the 1990s would result in 2.9-percent growth," they wrote. And getting to those levels, they added, would be "an unlikely scenario given recent trends."

2. Comparing U.S. growth with other countries'

We can't fact-check Trump here in the strictest sense (that is, we don't really know what these other leaders are telling him), but we can check the assumption that we can compare the U.S.'s growth rate with other countries'. The answer: It doesn't work like that.

Why 'MAGAnomics' Isn't Likely To Work

He explained that these countries have what some economists call a "latecomer advantage" — an additional lift that comes from starting out behind other countries. For example, he pointed to China, which has grown quickly in part because of foreign firms coming in and setting up shop there. So when Volkswagen sets up a plant in China, it's bringing in processes and technologies from the outside.

"They can do joint ventures or have foreign firms come in, they can license technology, they can improve labor productivity," he explained.

This is what helps a country like China or India have an economic growth rate of around 7 percent.

"We need a tax code that is simple, fair and easy to understand. And that means getting rid of loopholes and complexity that primarily benefit the wealthiest Americans and special interests. Our last major tax rewrite was 31 years ago. It eliminated dozens of loopholes and special interest tax rates, reduced the number of tax brackets from 15 to two, and lowered tax rates for individuals and businesses. Since then, tax laws have tripled in size."

The Reagan tax plan, approved by Congress in 1986, did cut back on loopholes, and it did cut the number of brackets down to two.

But there's one important point buried in here, and it's that bit about the number of tax brackets and setting rates. Trump said he wants to make the tax code "simple, fair, and easy to understand." Brackets and rates are not what make the tax code byzantine ("fair" is subjective, and we're staying out of that here).

"It's a very mild form of simplification," said William Gale, co-director of the Urban-Brookings Tax Policy Center at the Brookings Institution, a liberal-leaning Washington think tank, in an interview with NPR in 2015. "The real complication in the system is in the tax base, not in the rate structure. Figuring out how you calculate capital gains or figuring out whether you're eligible for the [earned income tax credit for lower-income Americans], given the child rules — once you've got that, then you just plug in the rates."

The brackets-simplicity argument is one Americans are bound to hear more as Congress debates a tax code overhaul; politicians try to draw this connection often. But slicing down deductions — and potentially upsetting some groups of voters — could be a tougher sell.

"Today we are still taxing our businesses at 35 percent. And it's way more than that. And think of it — in some cases way above 40 percent when you include state and local taxes in various states. The United States is now behind France, behind Germany, behind Canada, Ireland, Japan, Mexico, South Korea and many other nations also."

That's what puts the U.S. "behind" other countries, in Trump's estimation. Except what matters is the effective tax rate. Deductions and credits help bring U.S. companies' tax rates below what they would otherwise pay. The effective tax rate for U.S. corporations is only around 18.6 percent, which is on the high end compared with other advanced economies but not unusually high — it's a few percentage points below Japan, a few above Germany, and right in line with the U.K.

And those tax rates vary widely from firm to firm: A recent report found that out of 258 profitable Fortune 500 companies, 39 percent paid zero corporate taxes in at least one year between 2008 and 2015.