Note: NPR's First Listen audio comes down after the album is released. However, you can still listen with the Apple Music playlist at the bottom of the page. 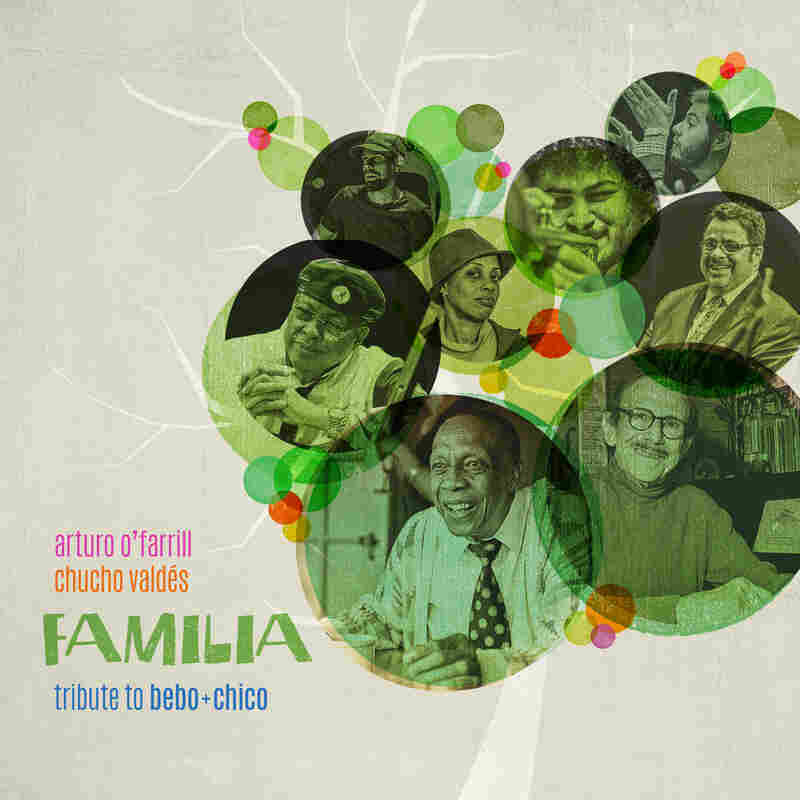 It's impossible to overstate the importance of both Bébo Valdés and Chico O'Farrill to 20th century Afro-Cuban music and jazz.

The curious thing is that each made those contributions on opposite sides of the Florida Straights. Bebo Valdés (1918-2013) was a pianist, composer, arranger and bandleader in Havana, while Chico O'Farrill (1921-2001) was busy leading ensembles in New York. Their paths through Cuban music reflect unbreakable musical ties between the U.S. and Cuba that defied politics and a Cold War.

Familia: Tribute to Bebo and Chico, is just that: a multi-generational celebration of their lofty contributions led by their sons, pianist and composer Chucho Valdés and pianist and bandleader Arturo O'Farrill, in a series of performances that not only pay tribute to their fathers, but also continue to expand the tradition of Afro-Cuban jazz.

Tribute's generational magic doesn't stop there. Pianist Leyanis Valdés and drummer Jessie Valdés would have made their grandfather proud, and the same can be said about trumpeter Zack O'Farrill and drummer Adam O'Farrill. These inclusions are not just acts of empty nepotism. The playing is skilled, creative and impressive. For fans of Chucho and Arturo, this will come as no surprise since each pair of progeny have recorded extensively under the family name.

Chucho Valdés is literally a towering figure of Cuban music made on the island. Standing over 6 feet in height, his explorations of the African influences in Cuban music are so profound that he is revered by musicians who play jazz, dance music, Buena Vista styled classic Cuban son, and even the island's hip-hop community.

Arturo O'Farrill took over his dad's regular Sunday night big band gig when his father died in 2001 and used the gig to remind music fans not just of Chico's individual contribution, but also of the magic found in the sounds of all those horns playing intricate, joyful noise over Afro-Cuban mambos swing. He has recast the band as the Afro Latin Jazz Orchestra and has brought the music into the 21st century.

The entire album is full of music that would have intrigued both elder statesmen. And yet this album is so much more than a tribute to musical giants. It has the feel of an emotional homage to patriarchs who have left both a familial and musical legacy in their wakes.