Accessibility links
Houston's Jazz Envoys Describe A Vibrant Scene Deluged, And Worry For Its Future An outsized number of jazz heavyweights call Houston and its surrounding area home — here, they speak of the situation down south and their concerns for its future.

Houston's Jazz Envoys Describe A Vibrant Scene Deluged, And Worry For Its Future

Houston's Jazz Envoys Describe A Vibrant Scene Deluged, And Worry For Its Future 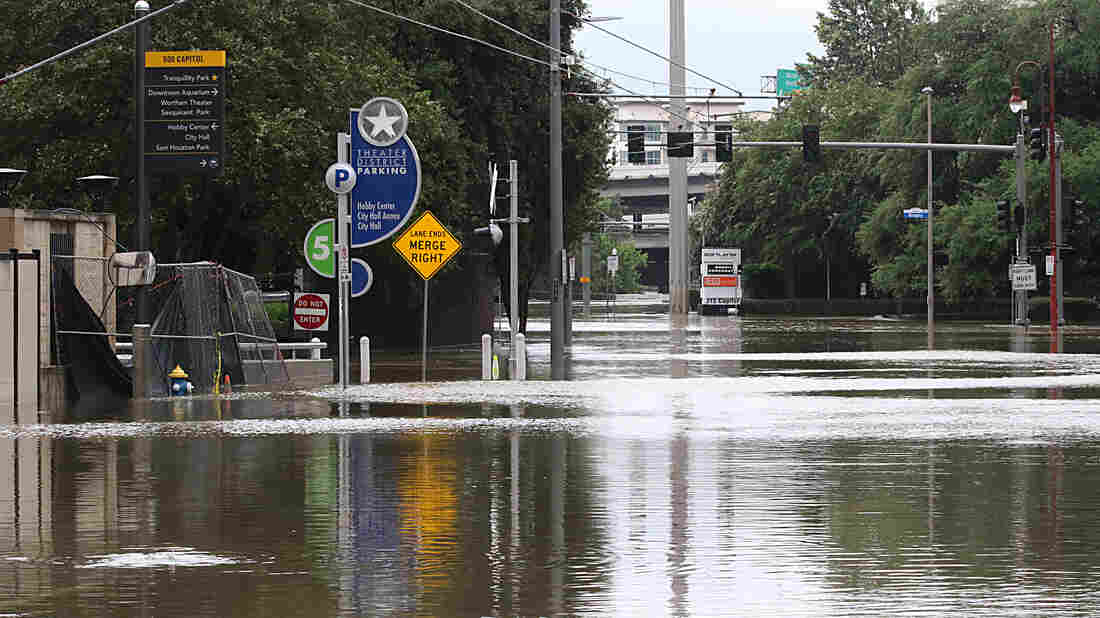 Downtown Houston's theater district, the second-largest in the nation, was flooded with water from Buffalo Bayou. Thomas B. Shea/AFP/Getty Images hide caption 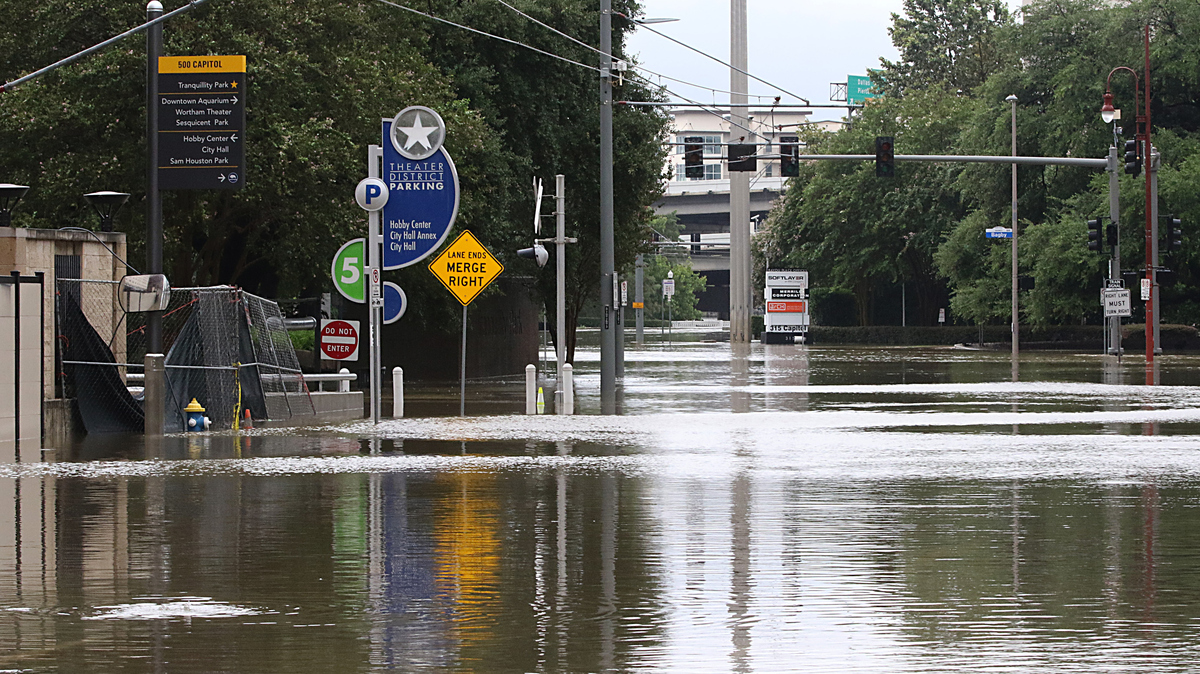 Downtown Houston's theater district, the second-largest in the nation, was flooded with water from Buffalo Bayou.

Kendrick Scott opened his first set on Tuesday night, at the Jazz Standard in New York City, with a pensive new composition titled "Home." It had a bittersweet melody, a waft of dark harmony, and a beat defined both by chop and flow. "I'm just going to send this out as a meditation for everybody in Houston, Texas right now," said Scott, a drummer, as he introduced the tune.

His band, Kendrick Scott Oracle, is stocked with serious talent, each musician a distinguished leader in his own right. Among them is guitarist Mike Moreno who, like Scott, originally hails from Houston, and has been keeping an anxious watch on the events of the past week.

The catastrophic wake of Hurricane Harvey has stretched across East Texas and into Louisiana, taking lives and uprooting tens of thousands of others, while causing billions of dollars in damage and disruption. But the flooding in Houston has been a specific worry for that city's jazz diaspora, which includes some of the most important artists of the present era.

In effect, there's no way to tell the story of jazz in our time without talking about Houston, even though it doesn't have the legacy sheen of a place like New Orleans, Chicago or New York. "You can't point to a jazz club, really, in Houston," pianist Robert Glasper, a three-time Grammy winner, said by phone this week. "But Houston probably has more jazz musicians that are relevant on the scene now than any other city."

Those musicians all have families back home, and in the days since Harvey made landfall last week, a lot of energy has been devoted to checking up on them, and on each other. Glasper's father, who lives in Beaumont, lost a friend to floodwaters there. But Glasper, like the half-dozen other musicians I spoke with, considers his family fortunate. "We've been on a thread of text messages making sure everybody is cool," he said, "me and Jamire Williams, Eric Harland, Chris Dave, Kendrick, Jason Moran." 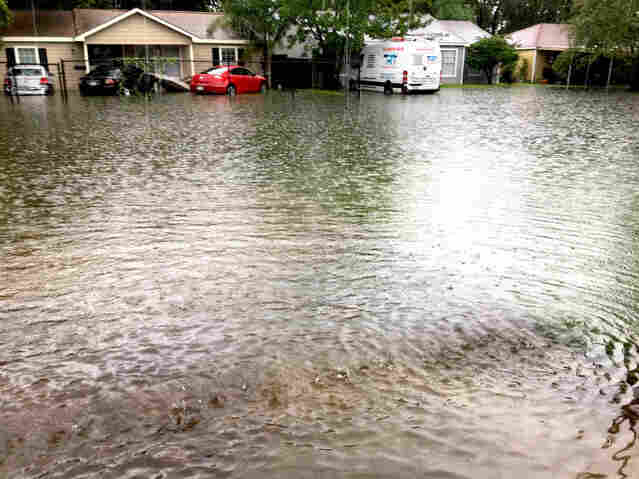 Brenda Harland, the mother of Eric Harland, took this photo from her porch in the Pleasantville neighborhood of Houston. Brenda Harlan hide caption 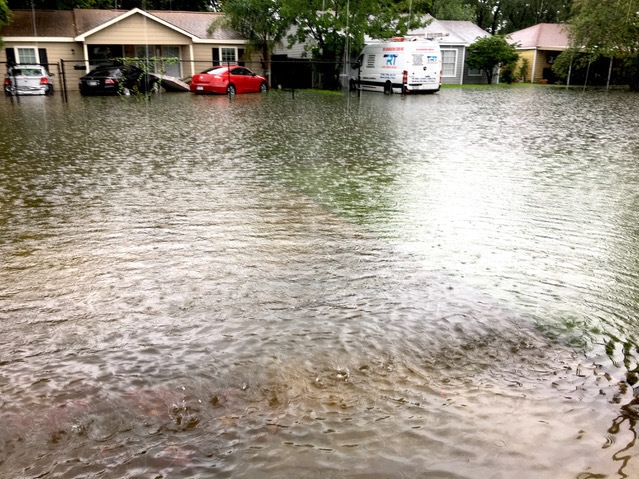 Brenda Harland, the mother of Eric Harland, took this photo from her porch in the Pleasantville neighborhood of Houston.

Notwithstanding Moran, another pianist, every name Glasper lists is an esteemed drummer-bandleader who has helped evolve the pulse of the music. Harland, the big brother of the bunch, was alarmed to see pictures taken by his mother on Saturday, as water was rising around his childhood home.

"There was a moment when I realized I couldn't get back there," he said on Wednesday night, after his efforts to travel to Houston from New York were forestalled. (He made it as far as Dallas-Fort Worth.) "You just want to cry, but you can't. I'm not the one going through it; if anybody should be crying, it's them."

Harland's mother was evacuated by FEMA before the flooding worsened, and she'll be assessing the damage in the coming days. She resides in the Pleasantville neighborhood of northeast Houston, which is also where Moran's grandfather lives. (He made it out safely too.)

At Least 100,000 Homes Were Affected By Harvey. Moving Back In Won't Be Easy

"I have maybe hundreds of family members in Houston," said Moran, who among other things is the artistic director for jazz at the Kennedy Center. "Nearly all of them are, miraculously, OK. But I have so much concern about how the city rebuilds after this. And it's not only physically, but psychologically — the trauma of having all this water inundate a livelihood. Kind of like what we saw happen with Hurricane Katrina in New Orleans. These are bastions of southern creativity that could, all of a sudden, be washed away."

That fretful focus on the near-future is a prevailing theme now. "What concerns me is the aftermath," said pianist Helen Sung. She grew up in southwest Houston, which saw considerable flooding from Brays Bayou. (Her parents, first-generation immigrants, are safe.)

Kendrick Scott was raised partly in Meyerland, another area that experienced devastating flooding. (He said his father, in Missouri City, had been shut in by water but was well-provisioned.) Scott has a unique perspective on the cultural implications of the storm, as a longtime associate of New Orleans-born trumpeter and composer Terence Blanchard.

On the 2007 Blue Note album A Tale of God's Will (A Requiem for Katrina), Scott helped Blanchard create a poignant reflection on the devastation of Hurricane Katrina. And before his set at the Jazz Standard, 12 years to the day after the breach of levees in New Orleans, Scott voiced wariness about any comparison between that moment and this one.

"I'm actually searching my feelings to see how I feel," he said. "I need more information. It's been so dark that I've just been talking to my family, instead of looking at the news."

Houston's jazz infrastructure is a curious thing, at once diffuse and deeply entrenched. There are a handful of clubs that feature jazz, with a focus on local talent. Cezanne, on the second floor of a building in the Montrose neighborhood, plans to reopen this Friday with the Bruce Saunders Quartet. Also back in business are Café 4212 and Phil & Derek's Restaurant and Jazz Bar. But assessing the recovery of the scene isn't as simple as ticking off a list of venues.

Downtown Houston's theater district, the second-largest in the nation, was flooded with water from Buffalo Bayou; earlier this week the Houston Chronicle drew a parallel to Tropical Storm Allison, which submerged much of the district in 2001. The Wortham Center, home to the Houston Ballet and Houston Grand Opera, saw floodwaters in its underground spaces, including storage areas and dressing rooms.

The Wortham Center is home to much of the concert programming by Da Camera of Houston, which specializes in jazz and chamber music. "We are a member of Theater District Houston, which consists of seven presenting organizations," said Sarah Rothenberg, Da Camera's artistic and general director. "We've been having conference calls since Monday about the state of the buildings. It's too soon to know anything."

Da Camera has been a major conduit between ex-Houstonians and the city's jazz community. A few years ago, the organization initiated the Jason Moran Homecoming Residency, an annual program that brought Moran not only into concert halls but also (and more to the point) into local schools. "These are students who are in elementary and middle school who had gotten curious about music," Moran said. "All these future musicians who will now have to watch their parents deal with trying to get their lives back together."

The more fortunate among them will likely attend the High School for the Performing and Visual Arts (HSPVA), which has been the single most important factor in Houston's ascendant influence on the jazz landscape. The school's legendary former band director, Robert "Doc" Morgan, mentored more than one generation of musicians now in circulation. 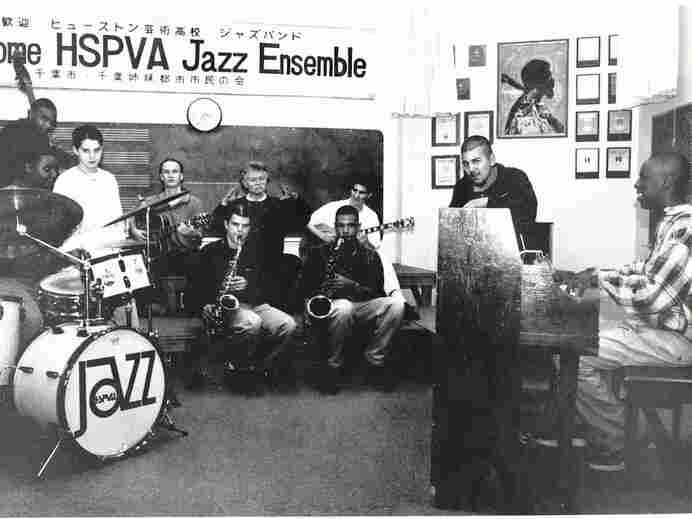 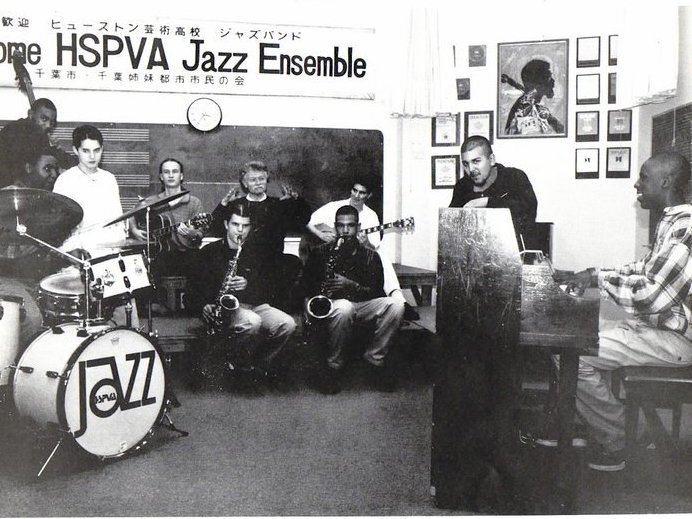 A photograph from 1997 depicts the HSPVA Jazz Octet, with members including Glasper, Scott, Moreno, saxophonist Walter Smith III, and bassist Mark Kelly. (Kelly is now a member of The Roots, which serves as a reminder that the HSPVA's impact extends far beyond jazz — and not just as the alma mater of Beyoncé.)

There's a strong pipeline from HSPVA to jazz conservatory programs. Several years ago, alumni established DocFest, a reunion concert that raises money for the Helen and Bob Morgan Jazz Scholarship Fund at the New School in New York. This year's DocFest, featuring keyboardist Bob James, was originally scheduled for this Friday, and had to be postponed.

But Warren Sneed, the current director of jazz studies at HSPVA, said that school was scheduled to resume on Sept. 11. "I've heard from my principal that there was some minor flooding but nothing that wasn't manageable," he said.

Sneed, who lives south of Meyerland, has been keeping track of students and former students, some of whom have endured serious flooding. "If you live in Houston, you're going to know somebody who was affected by the flood," he said. (Chris Walker, one of the alums who started DocFest, lives in a neighborhood that received mandatory evacuation orders.)

Still, Sneed spoke with resilient understatement on the city's recovery. "I don't see a mass exodus of musicians or anything like that," he said. "There really is a cool vibe in the city about working together and getting things back on track."

Moreno, among others, echoed this sentiment. "The city's going to bounce back, there's no doubt about it," he said. "Some of my friends in Houston have been going out and doing what they can to help."

Musicians in the Houston diaspora, meanwhile, are weighing options — and in some cases, looking ahead to their return. This year is the 30th anniversary of Da Camera, with a new season that happens to bear the theme "No Place Like Home." The first jazz concert in the series, on Oct. 6, will feature the Robert Glasper Experiment. Future concerts on the calendar include Harland (with saxophonist Charles Lloyd) and Sung (with the Mingus Big Band).

"We're living in a time where the whole idea of home is so fragile," Rothenberg said. "As soon as you talk about home you're also talking about its opposite — homelessness and exile. These things feel even more powerful now, as this city looks around and so many of our Houstonians do not have a home."

At the same time, musicians like Scott are looking to Houston with at least an idea of home clear in mind. Moran put it this way: "We who love Houston so much, who have departed the city and carried its name outside to the rest of the world, we owe a great debt to the city. And it might be our time to figure out a way to do something concrete."