Accessibility links
A Bipartisan Bill Helped Save Pets From Harvey, And Maybe Their Humans Too In the aftermath of Hurricane Harvey, many people who lost their homes to flooding were able to save their pets. NPR's Scott Simon reflects on the importance of those relationships. 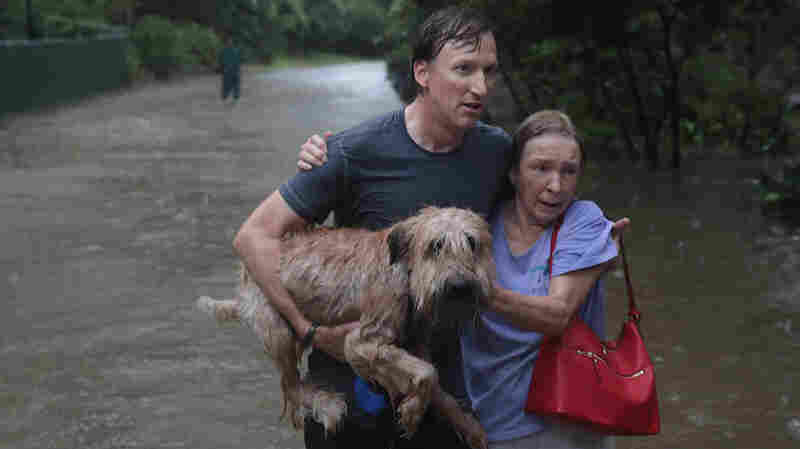 Andrew White helps a neighbor — and a dog — get to safety after their street was flooded by Hurricane Harvey. Scott Olson /Getty Images hide caption 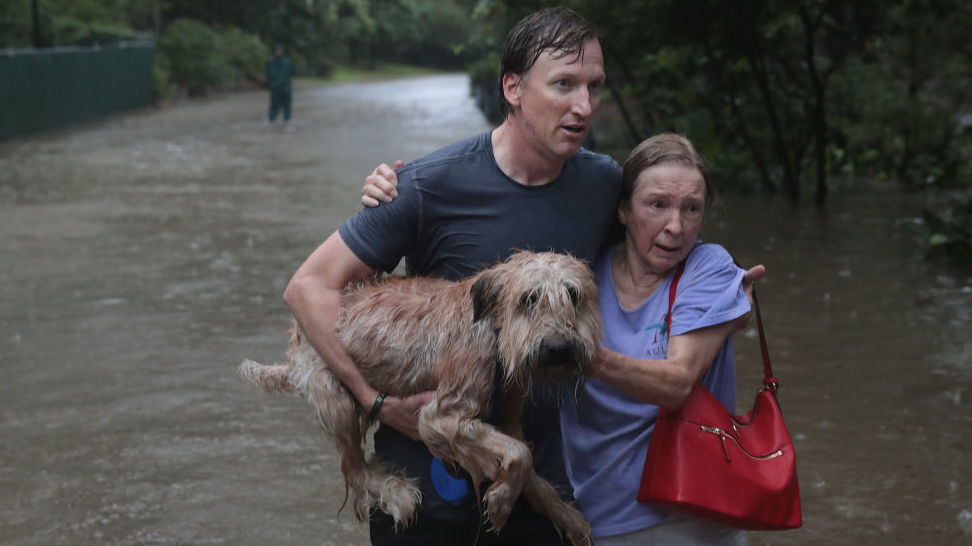 Andrew White helps a neighbor — and a dog — get to safety after their street was flooded by Hurricane Harvey.

Houston and Texas made Americans proud this week. Hurricane Harvey assaulted southeast Texas with vicious winds, rains and floods, but Texans struck back with unshrinking courage, spirit and selflessness. They risked their lives to save neighbors and strangers.

A lot of the images of people being plucked from flooded roads and picked up from rooftops showed them holding dogs, cats and other pets in their arms. Pictures from shelters show people sharing cots and food with their pets. These images help reveal an important change in U.S. emergency policies.

In 2005, a number of people in the path of Hurricane Katrina refused to be evacuated by emergency crews when they were told that they couldn't bring their pets. Some people then chose not to leave and risked riding out the storm. Sometimes, they didn't survive.

We did a story at the time on Miss Emma Anita Wagner Seals of Pass Christian, Miss. She was an 81-year-old woman who decided to stay in her home to take care of her cats and dogs as Hurricane Katrina surged ashore. She chose to perish with her companions in life, rather than leave them to drown. Her story reminded a lot of our listeners that while pets are not human beings, but they are members of our human families.

Emergency managers began to grasp that if they didn't make room for family dogs, cats, birds and turtles in rescue boats, buses, and shelters, they wouldn't be able to persuade a lot of people to leave their homes. So a bill was passed with bipartisan support — remember that?

The 2006 Pets Evacuation and Transportation Standards Act was sponsored by Republican Ted Stevens of Alaska in the Senate and Democrat Tom Lantos of California in the U.S. House of Representatives. It charges the Federal Emergency Management Agency with telling local emergency officials that they must include pets and service animals in their disaster evacuation plans.

This week, we saw what an act of Congress can do. It may have saved not only the lives of cats and dogs, who were carried out in the arms of their owners and rescuers, but the lives of people who love those animals as members of their family and wouldn't have left them.

We spoke with Chris Schindler of the Humane Society this week as he and volunteers worked in Dickinson, Texas.

"This time there was a plan for animals, and it made a difference," he told us.

"It's gratifying to see people united with their pets. And for some people in Texas," he reminded us, "their pets are all they have left."