Accessibility links
In 'World Of Tomorrow,' A Novelist Found Echoes Of 1939, Today Brendan Mathews' debut novel is a sprawling story of three Irish brothers and their adventures in America on the cusp of World War II. 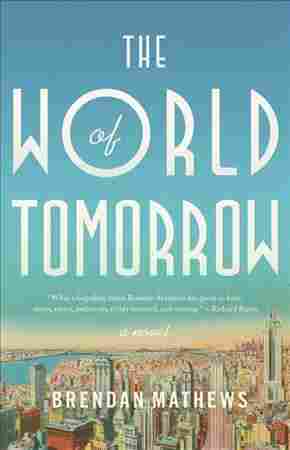 The World of Tomorrow

In his debut novel, The World of Tomorrow, Brendan Mathews portrays America as a land of possibility and redemption. "I wanted to write a book that was full of immigrants and dreamers and strivers," he says. "People who come to America or to New York specifically in pursuit of something — they all want something better, something different.

His novel, he explains, explores what the cost of those dreams might be. It's a sprawling story of three Irish brothers and their adventures in America on the cusp of World War II. Over the course of over 500 pages, readers meet a disgraced heiress to a mining fortune, a couple of up-and-coming jazz musicians in Harlem, a Jewish refugee artist from Czechoslovakia, shady members of the IRA-linked underworld and many others inhabiting both low and high society in New York.

Mathews talks about his own Irish heritage, why he set the story in 1939, and the significance of "the world of tomorrow."

On the book's trajectory

It's spread out over a week and it's the unexpected arrival of two brothers from Ireland — one an escaped convict and one a seminary drop out. And they end up in the home of their [third] brother who's a jazz musician in New York City in 1939. And over the course of the week that follows, it describes their collisions and run-ins with other musicians, with a wealthy family of heiresses, and with a former IRA member and mob enforcer who is on the tail of the escapee brother who has left Ireland with a small fortune which he has "liberated" — in his view — from an IRA safe house right before he left for the states.

On what drew him to this time period

I grew up in a large Irish Catholic family. My grandfather was an immigrant to the U.S. — he came over in 1929. And my family is full of storytellers; every time we get together there's lots to be told about the family's life in America and even the cousins back in Ireland.

But the period before that really was never discussed. Ireland goes through ... a war of independence and then immediately a civil war. And so I wanted to trace through some of that legacy of revolution, of political violence. I wanted to think about when a revolution becomes something else, and when the support of a cause like that morphs into something maybe a little more dangerous.

On the main character, Francis, who pretends to be a Scottish lord

Francis, he's escaped, and he suddenly finds himself in this life that he'd always dreamed of having. He was sort of on the fringes of high society in Dublin — he was a smuggler who provided luxury goods to the upper crust. And with all this money he's decided the best way for him to pass himself off as what he isn't is to go through what he calls "the first class plan." He's going to act as first class as he knows how, pass himself off as a lord, and figures nobody will ask any questions. And it works for a long time for him. He's on this fancy ocean liner, and they end up at the Plaza Hotel in New York. ... He's this very charming, roguish figure who keeps raising the stakes and everything keeps working out for him until about midway through the book when things start to take a turn.

On the character of Tom Cronin

In Ireland was he was a soldier — He was part of this revolution and so he would see himself as a soldier. But then, as the cause changes ... as he comes to the U.S. and starts working for this mobster who's sort of connected to the IRA in other ways, he really can't take on the mantle of soldier any longer ... he really is a soldier or a hit man. And he struggles with that ... the violence he carries with him all the time, when does it feel to him justified and when is it just raw violence?

He's tried to put all that in his past. He's tried to make this new life for himself, but he finds himself dragged back ... for sort of one last job that he has to carry out, he feels, because his family's safety is in question.

One of the things I was really interested in for the book was thinking about the past and how easy it is to shed that. Whether second chances are possible, whether redemption is possible — which is something that Cronin desperately hopes is the case.

1939 really is one of those years where you can say that the world that existed in 1939 would never exist again. ... But then at the same time, the more I looked into it, I kept seeing all these echoes from '39 that tied into now.

On why the book is set in 1939, right before World War II

But then at the same time, the more I looked into it, I kept seeing all these echoes from '39 that tied into now. America in a seemingly economic slump ... a refugee crisis overseas that the United States was trying really hard not to pay attention to ... a rising tide of fascism and support for it, both overseas and even in parts of the U.S. But also people who were just trying to get by — people who had dreams, people who wanted a world for themselves that was a little bit better, people who were still striving and trying to make something better.

On the origin of the title The World of Tomorrow

When this book is set, the 1939 World's Fair has just kicked off. And it promises this beautiful, brilliant world of highways and skyscraper cities and orchards held under glass domes. ... There's this beautiful, brilliant world that's right around the corner, and people in New York and the U.S. really want to see that world come to be, and there's this growing awareness that before they get to that world, there's a real price to be paid. That the war is right there in between the world that they know and the world that they want.

Peter Breslow and Barrie Hardymon produced and edited the audio of this interview. Beth Novey adapted it for the Web.