Accessibility links
The Astonishing Desolation Of Chavela Vargas' 'La Llorona' Vargas' ability to tap into the depths of the human spirit using just a guitar and her voice is exemplified by her 1994 album of original material and Mexican classics. 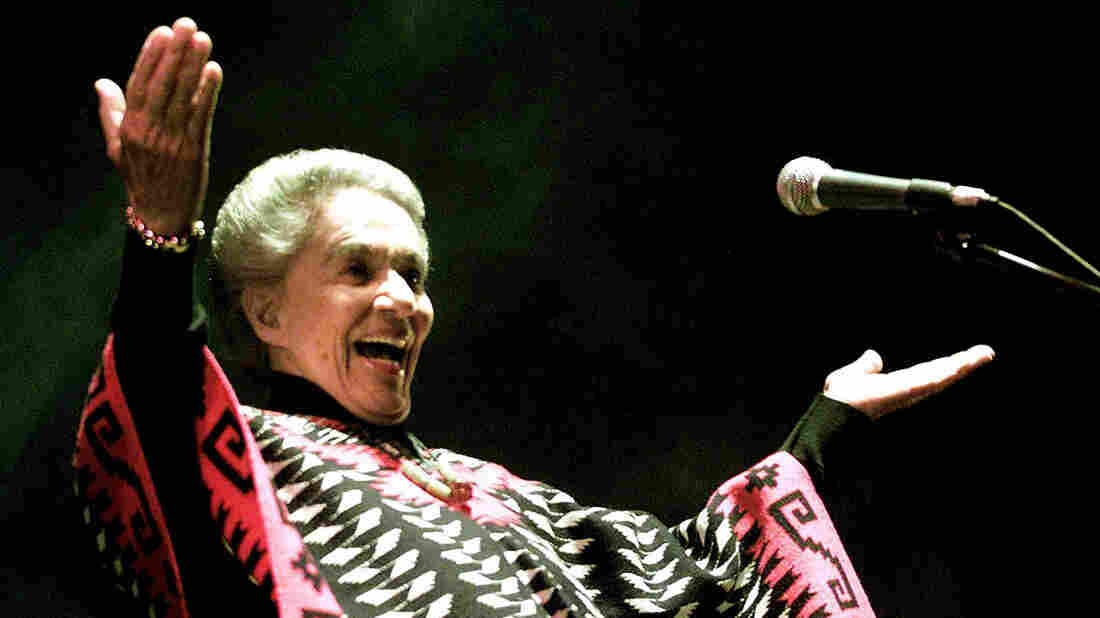 Chavela Vargas' album La Llorona showcases the astonishing range of desolation and heartbreak that only she is able to reach. Jaime Razuri/AFP/Getty Images hide caption 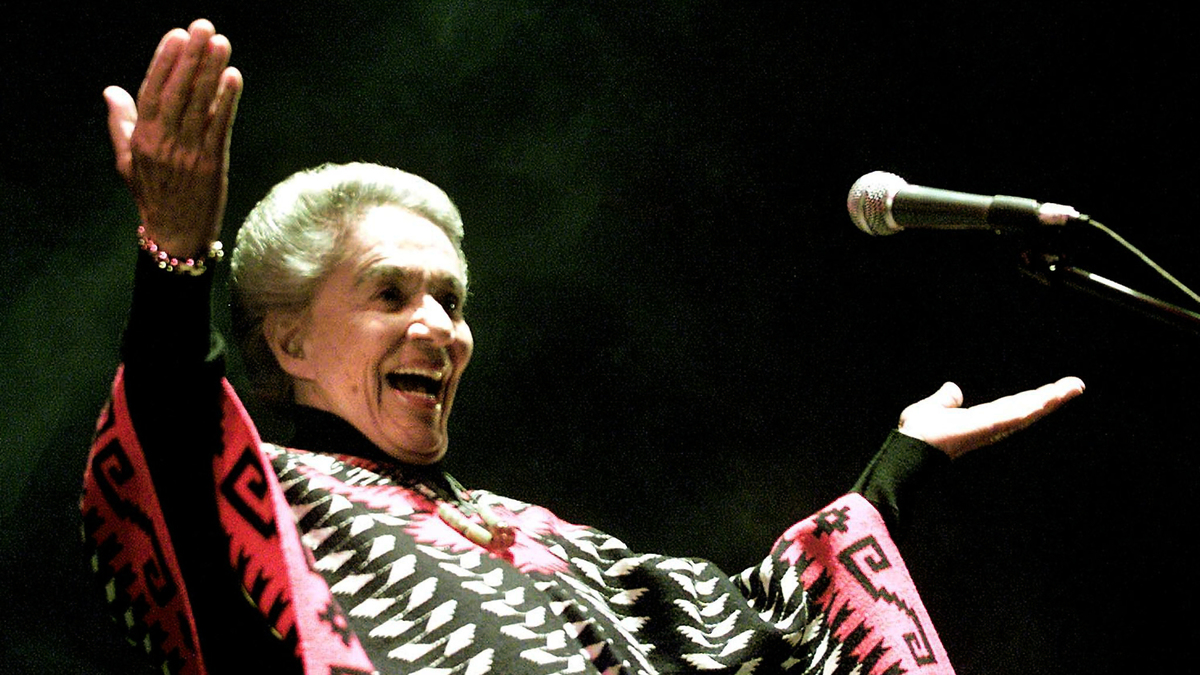 Chavela Vargas' album La Llorona showcases the astonishing range of desolation and heartbreak that only she is able to reach.

Isabel Vargas Lizano first unveiled her inimitable musical alter ego, Chavela Vargas, in 1942. It was less of a name than it was a reaction. As she explained in Catherine Gund and Daresha Kyi's 2017 documentary Chavela: "A bull came out to charge against life, goring and kicking. I would fight like a bull and march on."

Vargas — who was born in Costa Rica but who spent the majority of her life living in Mexico, where she became a star — was careful to differentiate between Isabel ("the person I love") and Chavela (a "real b****"). Yet cultivating and embodying this persona is how Vargas armed herself with the strength to combat the machismo and homophobia that plagued the world she lived in. And through this, she found within herself the will to tap into the depths of the human spirit, perhaps more than anyone in history, using just a guitar and her voice.

The mid-century mainstream image of women was coquettish and demure, and while a lot of music reflected these ideals, Vargas' style was anything but that. She would growl, howl, whimper and shake while singing rancheras and corridos — overtaken with so much grief, it was as though she was experiencing the very same loss again in real time. She would pause before starting a song, taking her time, allowing her arms to curl above her head, as though preparing to ascend. While performing "Quisiera Amarte Menos" in Spain in 1993, she scowled, biting her lip with the memory of an easier time when she loved this person less. And, in a moment of lightness — or perhaps realization — she pulled her arms into her chest, crying out: "No sé si necesito / Tenerte o perderte" ("I don't know if I need to have you or lose you"). As Spanish filmmaker Pedro Almodóvar once put it: "In her voice, I've found one of my best collaborators. And a faithful reflection of myself."

Vargas didn't even have to utter a word in order to be considered radical, though. She refused to wear what was considered traditional for women back then: flouncy dresses with hoop skirts, braids and shawls. Instead she opted for her hair pulled back, and would come onstage hocking a bottle of tequila, a guitar and a poncho, which earned her the nickname La Dama del Poncho Rojo. Once, Vargas recalled the early days when she started performing in Mexican cantinas. "Time stood still," she said. "What's up with this woman wearing pants before the 1960s?"

Vargas was born wrestling against the norm in 1919. As a child growing up in San Joaquín de Flores, she didn't exude or perform femininity, and her parents hid her from family friends when they visited the house. She was also taunted for her sexuality, a pain she carried with her throughout her entire life. While it was an open secret that Vargas had no interest in men (famously, she would seduce the wives of politicians and intellectuals who would come to see her perform, and once woke up next to Ava Gardner), she didn't identify as a lesbian until much later in life. "It doesn't matter if I'm homosexual," she once said. "Let's leave that aside. Human beings love, and that's all that matters. Don't ask them who they love or why. That's the beauty of it."

Vargas was also well-acquainted with solitude, and had a lifelong battle with alcoholism (in one of her most beloved numbers, "En el ultimo trago," she encourages her former lover to "drink this bottle with me"). She and her friend, the venerable Mexican singer José Alfredo Jiménez (who, in turn, discovered her), were the nightmare of bartenders: They'd clean out the entire joint and stay all weekend. Vargas had stage fright, and she'd need a few tequilas to get up onstage, but people eventually ceased booking her because she would perform drunk. She then stopped singing for twenty years. Vargas was broke — she never made decent money from her album sales — until the early 1990s, when she took a chance on playing several Mexico City shows. She then went to Spain, a move that relaunched her career — only this time, she was playing sold-out theaters, not cantinas, and receiving the respect for which she had spent a lifetime fighting.

Around then, in 1994, Vargas released one of her strongest albums, La Llorona. It's a work that melded Mexican classic numbers, like Alvaro Carrillo's "Luz De Luna" and Juan Zaizar's "Cruz de Olvido," along with some of her originals that showcase the astonishing range of desolation and heartbreak that only she is able to reach. Vargas doesn't hold back on this album: She sighs throughout its title track, occasionally interspersing words with sad chuckles, which, turns out, is more sad than if she'd straight-up sobbed throughout this song. On the somber "Sombras," she braces for a breakup that nearly swallows her whole: "Cuando tú te hayas ido / Me envolverán las sombras" ("When you've left, the shadows will swallow me whole"). And on the wrenching "Toda Una Vida," she admits that if given the gift of hindsight, she'd still make her life with someone no matter how: "Toda una vida / Estaría contigo / No me importa / En qué forma / Ni dónde ni cómo / Pero junto a ti" ("An entire life I'd be with you; I don't care how nor where nor how, but next to you").

Vargas gave so much of herself onstage, it was almost shocking that she was able to walk away at the end of the show on her own two feet. During her last-ever show in Spain, in 2012, the incendiary musician tried in earnest to die while belting out the songs that had made her both a musical, cultural and queer icon (she wanted to be known as the woman who croaked onstage while performing). While she didn't falter then — she died a few days later, at age 93 — the message was clear: This was a woman who would not, and cannot, be forgotten, and is an absolutely central figure in the canon we're continuing to build.