Accessibility links
Fiery And Nuanced, 'Tales Of Two Americas' Sheds Light On Economic Inequality This collection of essays, poems, and short stories — edited by John Freeman — makes for a gripping and intensely personal examination of inequality, transience and displacement in America. 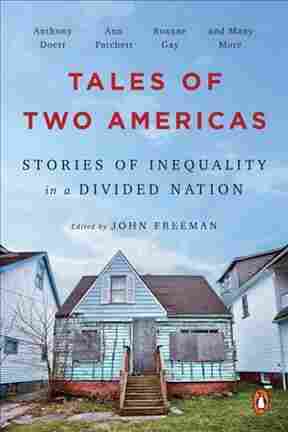 Stories of Inequality in a Divided Nation

The term "economic inequality" has been used so often over the past few years, it can start to blend into the background. The same thing happens with economic equality itself — the poverty and injustice that's too often accepted as a fact of life. Tales of Two Americas seeks to rectify that. This collection of 36 essays, poems, and short stories puts the focus squarely on inequality, from hunger and homelessness to racism and the treatment of immigrants. Rather than speaking academically or in the abstract, however, the book's impressive roster of contributing authors push their pens toward the personal.

Many of the essays pivot around travel. In "Mobility," by Julia Alvarez, a routine layover in the Atlanta airport becomes a quest to help a lost young Mexican woman find her way to Tulsa — an ordeal that sheds light on everything from America's linguistic barriers to the luxuries many Americans take for granted. Karen Russell's piece, "Looking for a Home," details the author's 2014 relocation to Portland, Ore., where she winds up renting an apartment directly above a homeless shelter — and experience that causes her to reassess the effects of gentrification on longstanding neighborhoods and those less fortunate, as well as her own unwitting role in this upheaval. And in "The Worthless Servant," by Ann Patchett, a road trip to Nashville uncovers the plight of a group of homeless men striving to put down domestic roots. Delivered with varying shades of color and candor, these pieces form an anthology within an anthology — a gripping triptych of American displacement and transience.

Popes, Piazzas and Parenthood in the Eternal City

Where Patchett's story is a seamless blend of first-person and hard reporting, Rebecca Solnit's essay "Death by Gentrification: The Killing of Alex Nieto and the Savaging of San Francisco" goes more journalistic. Precisely told and chilling in detail, it relates the shooting death of 28-year old security guard Alex Nieto at the hands of San Francisco police in 2014. Solnit masterfully weaves together two narratives: how Nieto's past and Latino identity were used against him in the ensuing investigation, and how San Francisco's melting-pot ideals have yielded less-than-perfect results.

As impactful as its essays are, the book's fiction and poetry lend it even more flesh and soul. "Dosas," a short story by Edwidge Danticat, explores her own background as a Haitian immigrant through the character of Elsie, a home-care nurse whose former friend Olivia has been kidnapped for ransom back in Port-au-Prince. Urgent and gripping, it's spiked with the struggles of those caught up in a web of diaspora, documentation, and disparity. Roxane Gay's short story "How" hauntingly conveys the desperation of a disadvantaged family in small-town Michigan, while Joyce Carol Oates' "Leander" unflinchingly examines the motivations and regrets of a white woman at a Black Lives Matter meeting, a portrait of guilt rendered in muted tones.

As impactful as its essays are, the book's fiction and poetry lend it even more flesh and soul.

Poems like Juan Felipe Herrera's "For the Ones Who Put Their Name on the Wall" and Ricky Laurentiis' "Visible City" probe border control and Hurricane Katrina with emotion and eloquence. There's also a comic: "Invisible Wounds" is an excerpt from Jess Ruliffson's forthcoming graphic novel, a stark meditation on the cost of war based on interviews with veterans of Iraq and Afghanistan.

Both fiery and nuanced, Tales of Two Americas was edited by John Freeman, a founder of the literary journal Freeman's and a prolific essayist himself. His introduction to the book is one of its most impassioned entries. In it, he observes how the act of walking through an American city with eyes wide open can radically expand our capacity for empathy, or as Freeman calls it, our "bandwidth of care" — not to mention our resolve to work toward something better.

Cities, he says, have become "meccas for luxury and creative economy work" that still "depend on service labor to run their dream machines," places where the nation's widespread inequality coalesces yet often goes ignored. Looking toward his own creative-economy profession with a critical eye, he also notes, "The way systems of oppression have entrenched themselves in the United States calls out for a new framework for writing about inequality." Poignant and profound, Tales of Two Americas is exactly such a framework — one that unites a multiplicity of voices into a powerful rallying cry.

In a previous version of this book review, Roxane Gay's first name was misspelled as Roxanne.