Accessibility links
Hunters Sour On Trump's Interior Secretary Over Public Lands Review Though Ryan Zinke promised to bring a balanced vision to managing public lands, hunters and other sportsmen now feel that he's not listening to their concerns. 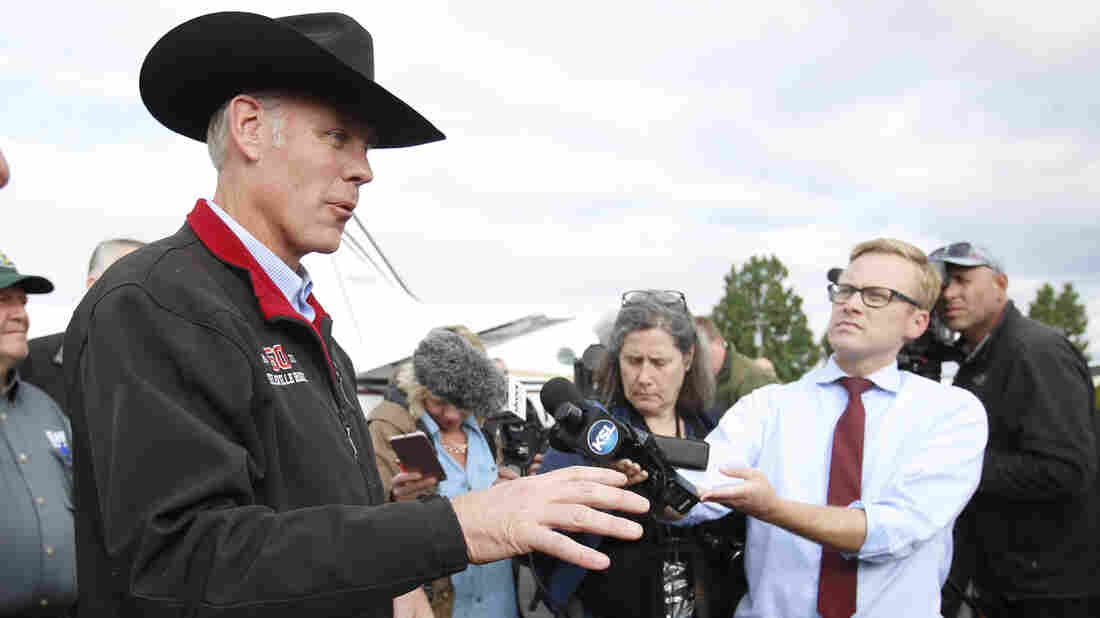 Secretary of the Interior Ryan Zinke talks to reporters in Kanab, Utah, after visiting the state to talk with officials about the status of their monuments. George Frey/Getty Images hide caption 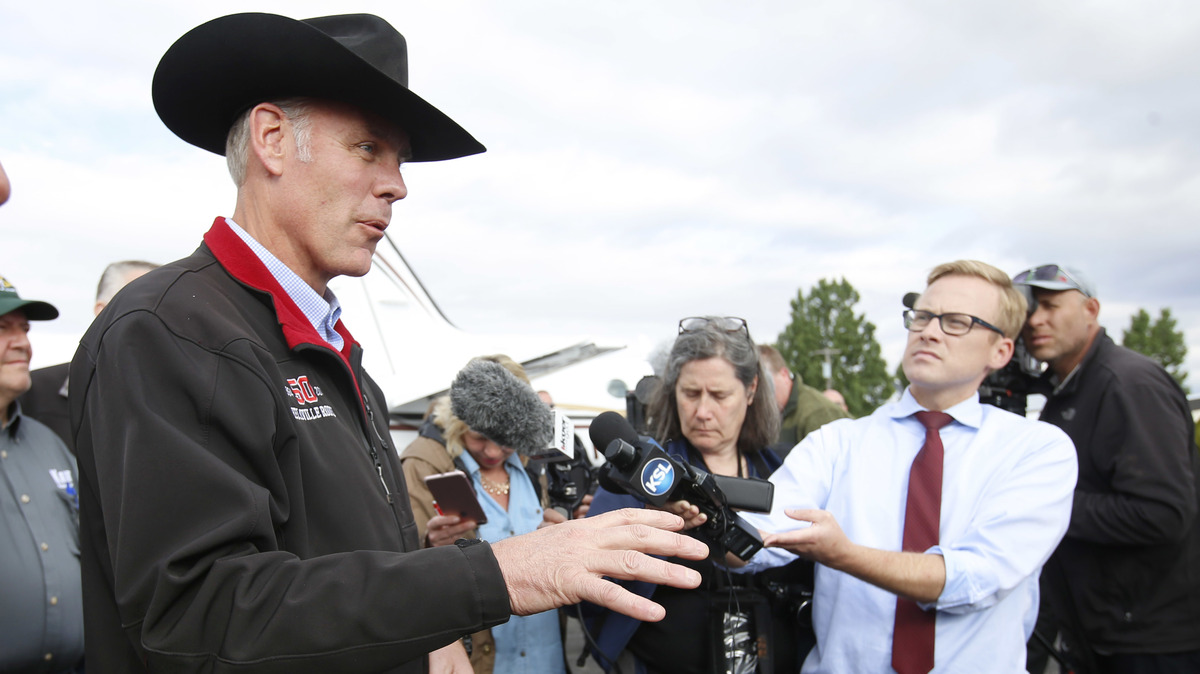 Secretary of the Interior Ryan Zinke talks to reporters in Kanab, Utah, after visiting the state to talk with officials about the status of their monuments.

Hunters, fishermen and other sportsmen had high expectations when Ryan Zinke was tapped to be President Trump's interior secretary, in part because of his promise to bring a balanced, Teddy Roosevelt-style vision to managing public lands.

But the former Republican congressman from Montana is now the target of a critical ad campaign by one of those groups, a symptom of eroding support among a deep-pocketed faction that has become increasingly influential.

Zinke "definitely likes to espouse the ideals of Teddy Roosevelt," says John Sullivan, chairman of the Montana chapter of Backcountry Hunters and Anglers, who is featured in the ad. "He's not living up to them now."

In particular, the sportsmen are upset by Zinke's handling of a controversial review of protected national monuments and the scope of restrictions on how they are used. The review covers 27 protected monuments that are larger than 100,000 acres. 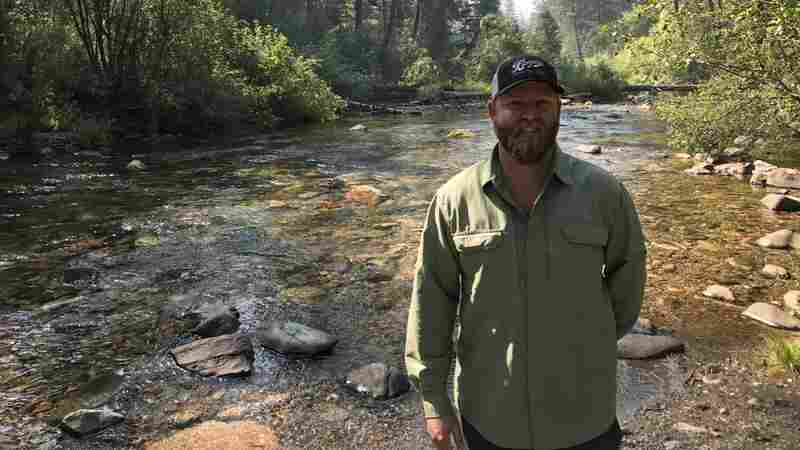 John Sullivan says Zinke used to be a champion for hunter access. Now, "we feel like he's not listening to us," he says. Kirk Siegler/NPR hide caption 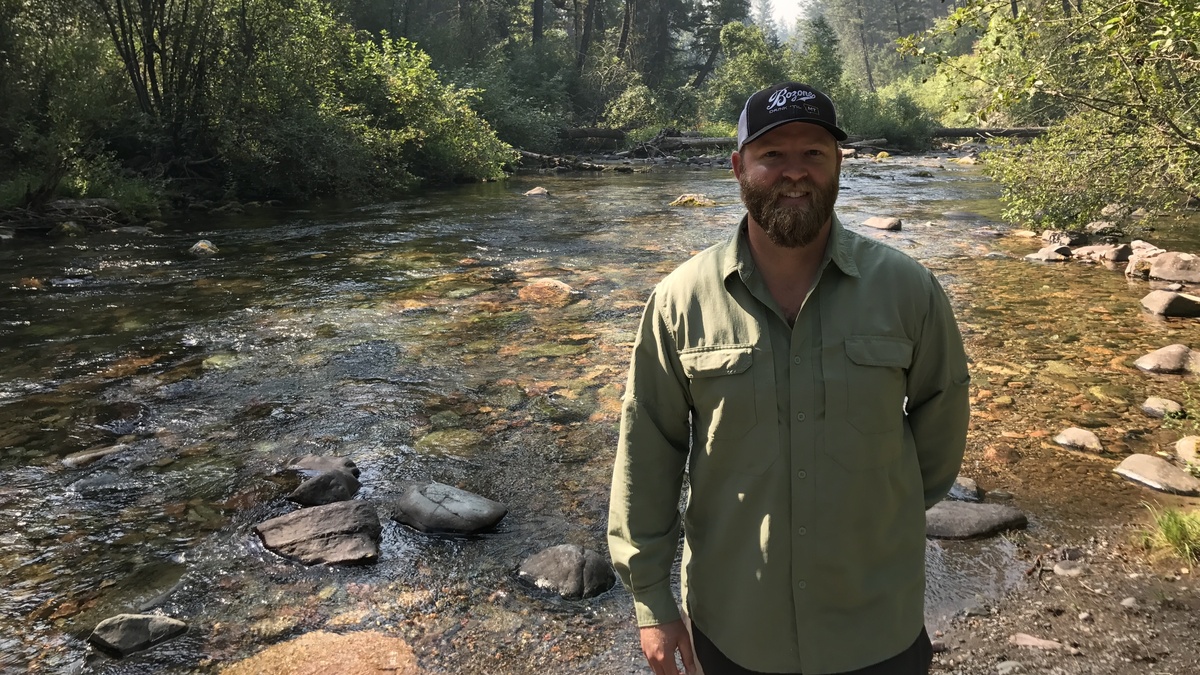 John Sullivan says Zinke used to be a champion for hunter access. Now, "we feel like he's not listening to us," he says.

The secretary is not expected to recommend the elimination of any of the monuments. But a handful are slated to be shrunk in size, and the sportsmen say that reducing their boundaries means potentially more land for development and less for hunters.

Sullivan says as a congressman, Zinke was a champion for hunter access, even if it meant bucking his own party.

"He told us he'd do the same thing, before his promotion," Sullivan told NPR. "He's reversed that; we feel like he's not listening to us."

The ad campaign is significant because sportsmen's groups like Sullivan's have become a political force on public lands lately. They have mobilized, sometimes literally in camouflage, to beat back high-profile bills in statehouses and in Congress that they see as restricting access to public lands.

Their members tend to cut across the political spectrum and sometimes draw unlikely alliances with more traditional environmental groups.

The job of interior secretaries is inherently challenging because they're in charge of so much land; they need to balance a long list of interests, and criticism routinely comes from all sides. But the politics for Zinke in this case are especially tricky.

A lot of Trump's base views any restrictions on land use, like monuments, as federal overreach. Mining companies and other industries seek more access to public lands in many Western states and believe the Obama administration was too restrictive.

But Zinke can't afford to ignore the sportsmen. Among the higher-profile members of the groups is the president's son Donald Trump Jr. He is an avid big-game hunter who said often on the campaign trail that wild areas should be protected to preserve access for sportsmen.

Trump Jr. is closely allied with several sportsmen's lobbying groups that pushed for Zinke to become interior secretary, including Backcountry Hunters and Anglers, the Theodore Roosevelt Conservation Partnership and the Boone and Crockett Club. Trump Jr is now helping run the family's business and has no official position in the White House.

In a statement, Zinke's spokeswoman called the sportsmen's ad campaigns misleading. Some of the secretary's backers also think the controversy around the monument review is overblown.

The secretary made his views known this summer as he crisscrossed the West touring large tracts of protected public land like the Cascade Siskiyou National Monument in southern Oregon. It was designated by President Bill Clinton and expanded by President Barack Obama, and the Trump administration is considering shrinking it.

"I'm making sure that people have a voice," Zinke said in Oregon. "That means the ranchers, the timber guys, what are their concerns? We want to make sure that we look out as Roosevelt did a hundred years ago, to make sure we have in place the right policies so that our experience in public lands remains."

The concerns about Zinke are not unanimous across the sportsmen's clubs.

By executive order, the Obama administration protected more than 4 million acres of new land as national monuments in the West alone. And Paul Phillips, a board member of the Montana-based Boone and Crockett Club, points out that some don't have management plans that necessarily guarantee hunting access.

"What are we afraid of? That's what I would ask to begin with," said Phillips, whose group was founded in 1887 by Teddy Roosevelt. "Having Secretary Zinke step in and look at this when there's been such a dramatic increase in such a short period of time, really makes sense to us."

The Boone and Crockett Club also counts Trump Jr. as one of its board members.

It's unclear what the political fallout could be once the review is expected to be finalized later this year. But should the administration move ambitiously to shrink the monuments, everyone is predicting a drawn-out legal battle.